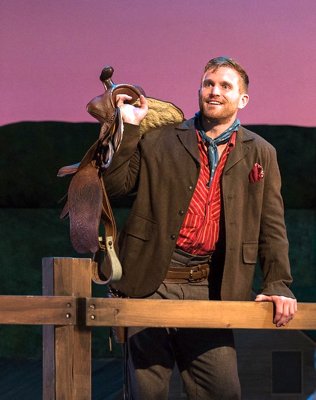 [Below: Baritone Jarrett Ott; edited image, based on a publicity photograph, from jarrettott.com.] 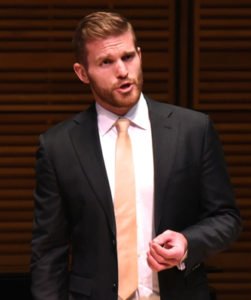 Wm: My first question to most artists I interview asks about their earliest memories of music, and their first memories of opera.

JO: I grew up in the small town of Pen Argyl, Pennsylvania, between Philadelphia and New York City. My earliest memories of music were driving around in the car with my mother listening to doo-wop music. She would always encourage me to sing along.

I first took up instrumental music in the third grade. I really wanted to take up the string bass, but it was too large to transport, so I went for the cello. I soon after learned the alto sax as well.

Wm: When did your interest shift from instrumental to vocal music?

JO: I began singing in the sixth grade, and had a wonderful music education from the very beginning. It was choir, when I auditioned for the County and District choirs and was ranked rather well, that sparked my interest to work more intently on the voice.

I began taking voice lessons from Joseph Di Minico, the choir director of a neighboring school district. He pushed me to excel in voice from the very first lesson and even created a community theater program to do a staged musical (Footloose!), since my school didn’t have musicals.

At the time, my interest in vocal music coincided with my growing awareness that I was physically attracted to members of my own sex. I made the decision as a very young teenager (13 years old) to be open to my friends about that. Those involved in the world of music performance were a source of wonderful support for my decision.

Wm: When it came to applying for college, what did you decide to do?

JO: I had a volunteer spot as a Junior Volunteer EMT, working many hours in the ambulance. My high school set me up with job-shadowing in a hospital trauma unit, and I was encouraged to pursue medicine in college. While I loved this work, voice and performance continued to be my major interest.

My voice teacher suggested that I had the kind of voice that would interest university music departments. I looked into a few schools within Pennsylvania, since I was very unfamiliar with the future in this field. I searched to find the best school to become a music educator.

I was accepted to West Chester University School of Music in 2006, and Randall Scarlata became my voice teacher for the next four years. Scarlata quickly understood my possibilities and took me to see Rossini’s “Barber of Seville” at the Met, which was my first live opera performance. I had goose bumps the whole time and fell in love with the art form and with the character of Figaro.

Randall pushed me to be always working on my craft. The summer after my freshman year, I took part in Oberlin Conservatory of Music’s program in Arezzo, Italy. Then, during my second year, I auditioned and was accepted into the Chautauqua Summer Music Festival. At Chautauqua, I was accepted as a voice student of Marlena Malas. I went on to spend five summers in Chautauqua and really built my repertoire there.

A couple of years later after being accepted to Chautauqua, I applied to and was accepted at the Curtis Institute of Music in Philadelphia. It was a two-year Masters institution, but they allowed me to add an additional two years to continue my growth as a singer and I graduated in 2014.

Wm: You show a lot of interest in performing concerts. How did that interest develop?

JO: Early in my studies, Scarlata encouraged me to study German lieder, to attend many lieder/art song performances, and to learn the vocal style, phrasing and coloring. I’ve always been very appreciative of this. Experiencing these different recitals sparked my interest in contemporary art songs, concert works, and new opera.

Wm: You were a young artist who drew the cover assignment for the lead role in the world premiere production of an important opera [World Premiere Review: All-Star Cast and Crew, Ardent Audience Ovation for Higdon’s “Cold Mountain” – Santa Fe Opera, August 1, 2015]. How did this affect you?

JO: The Santa Fe Opera Apprentice Program is simply one of the greatest of its kind. I was able to see how established opera singers like Nathan Gunn, Isabel Leonard and Kevin Burdette work. The whole cast introduced me to the professional side of my chosen craft and how to be a good colleague. I watched intently for ways to perform at a high level and how to communicate emotion from the stage. That first year as an apprentice felt as though it has years of schooling wrapped up into three short months. 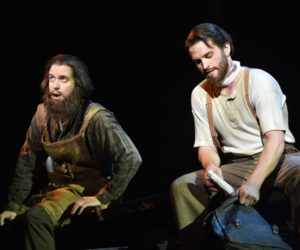 Wm: Santa Fe Opera’s Summer 2015 wasn’t your “A Star is Born” moment, but that cover assignment later worked out to your advantage. Let me hear in your own words what happened next.

JO: After Santa Fe, “Cold Mountain” was scheduled for performances at Opera Philadelphia. Nathan Gunn had been in Philadelphia for the first three weeks of rehearsal, when he was called home for a family emergency.

On the scheduled day off, I traveled up to New York City to see my partner in a gigantic blizzard. I got the call while out to dinner asking if I would replace Nathan. My heart sank. No trains were running that night nor the next day, but fortunately there was an extra day to get to Philadelphia.

Once I finally made it back to Philly at 9 in the evening, I was taken directly to Maestro Corrado Rovaris and I sang through the entire opera with him going past midnight. 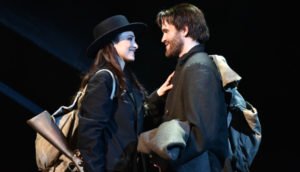 I had four stage rehearsals. Luckily for me, I had lived with the opera and character of Inman for years starting in the early workshops at Curtis and in Santa Fe, where I had the experience of a cover run. It turned out to be an absolutely thrilling time.

Wm: This was in February 2016 and that summer you returned as a Santa Fe Opera Apprentice as Masetto in Mozart’s “Don Giovanni” [Review: Okulitch, Ketelsen Star in Santa Fe Opera’s New “Don Giovanni”, July 2, 2016]. By now, even though still an Apprentice, you had gained recognition for your lead role in “Cold Mountain”, and were a principal artist in “Don Giovanni”.

You also were selected to join Maestro Teodor Currentzis and director Peter Sellars in their Fall 2016 European tour of Sellars’ modern update of Purcell’s “The Indian Queen”. You performed Don Pedro de Alvarado at the Grand-Théâtre in Geneva and at the Bremen Musikfest.

In March 2017, you were singing Charlie in Jake Heggie’s “Three Decembers” in Memphis, Zurga in Bizet’s “The Pearl Fishers” at the North Carolina Opera in Raleigh soon after, and that summer Curly in the Glimmerglass Festival’s production of Rodgers and Hammerstein’s “Oklahoma!” [Review: Glimmerglass Festival’s Rip-Roaring “Oklahoma!” – July 14, 2017.] . It seems a nice balance between musical theater, contemporary music and French romantic era opera.

JO: I always had a love for musical theater and sang it in high school and college quite often, although not in staged performances. As soon as I was able to drive, I would go into New York City to see Broadway shows on the weekends. I love the classical and the modern musical theater repertoire. 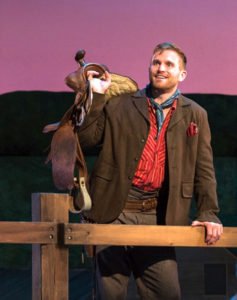 I’m constantly looking to expand the mind and pushing myself outside of my own comfort level. Yes, that entire repertoire you listed is quite different, but I work hard to find ways to make each style my own with my own voice. People may not always like my interpretation, but that’s art, isn’t it?

JO: I found Laurent to be a kind, giving person and director. We were all aware that “Candide” is a tough piece to come at. People expect to be overly campy and filled with slapstick. Laurent pulled us back from that. He wanted the comedy to happen naturally. I thought the production was very well done and found the role of Maximilian to be a hoot. 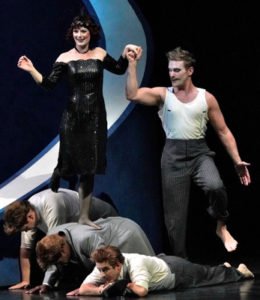 I understand that you’ve come to the attention of Casting Director Boris Ignatov at the Oper Stuttgart that have plans for you during the period between Santa Fe Opera’s 2018 and 2019 seasons.

JO: Boris first heard me in Dortmund while on tour through Germany with Purcell/Sellars’ “The Indian Queen”. Early in 2017, I was singing in Berlin and asked to travel down and audition for Oper Stuttgart, where he would be the new casting director in the upcoming season.

I am contracted to perform five wonderful roles with them in 2018-19: Figaro in Rossini’s “Barber of Seville” in October, Marcello in Puccini’s “La Boheme” and Dandini in Rossini’s “La Cenerentola” in December and in April, in a couple of new productions, Chou-En Lai in Adams’ “Nixon in China” and Oreste in Gluck’s “Iphigénie en Tauride”.

After the season ends in Stuttgart, I come back to the U. S. to perform a new opera by David Lang with the New York Philharmonic and then return to The Santa Fe Opera as Guglielmo in Mozart’s “Cosi fan Tutte”.

Wm: These last few weeks have been momentous for you romantically as well.

JO: They sure have! I recently got to marry the love of my life, Adam Franklin. In August, Supreme Court Justice Ruth Bader Ginsburg  officiated in a preview of the marriage between Adam Franklin and me, in which she graciously signed the legal marriage documents and gave a beautiful small ceremony, followed by the actual vow exchange ceremony on September 2nd in front of our family and friends. 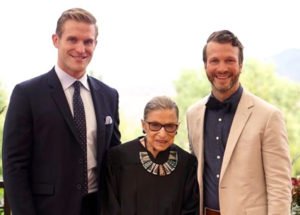 Adam works for the Santa Fe Opera as an artistic administrator, where he spends five months a year during the season, and the other seven months in the New York City office, where we live and are based.

I really appreciate being part of the opera community, which accepts and supports Adam and me so warmly.

Wm: Thank you for your time, and congratulations on your marriage.

JO: Thank you, and thank you for the wonderful chat!