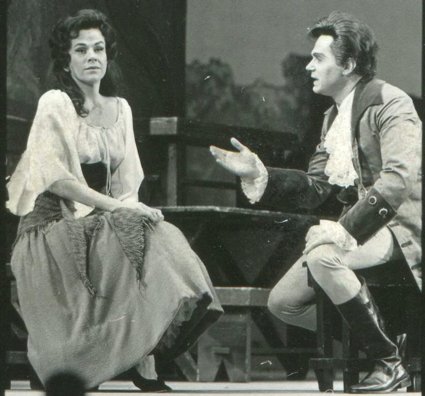 I renewed my subscription to the San Francisco Opera’s “main” season for Fall, 1966. I decided to subscribe also to a full season of the company’s budget-priced Spring Opera Theater [SPOT] performances.

I had attended select SPOT performances, all held at the War Memorial Opera House, in the previous two years, but, my undergraduate days behind me, I had the time to explore most the operas presented in a SPOT season.

Mezzo-soprano Helen Vanni was cast in the title role.  Vanni was one of the New York Metropolitan Opera’s company artists, singing comprimario roles throughout the late 1950s and 1960s.

Vanni was a substantial talent, with a voluptuous mezzo voice. The evening’s highlight was Vanni’s stunning performance of Mignon’s most famous aria, Connais-tu le pays.

[Below: Wilhelm Meister (Frank Porretta, right) is fascinated by the story about the early life of Mignon (Helen Vanni); edited image, based on a photograph, courtesy of the Archives of the San Francisco Opera.] 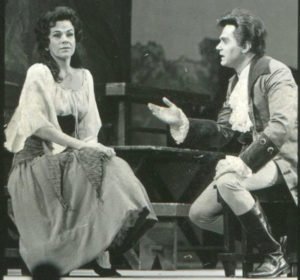 The lead male role, Wilhelm Meister, was sung by lyric tenor Frank Porretta (who previously had sung the role at the New York City Opera, where he was a principal artist). His voice was bright-sounding, with the strength in the upper register the part requires.

A contemporaneous sound-track of his performance as Avito in the NBC Opera Theater’s 1964 production of  Montemezzi’s “L’Amore dei Tre Re” (sung in English as “The Love for Three Kings”) can be accessed at YouTube.

Four decades later I would be reviewing performances by another Frank Porretta (his son, named for both his father and grandfather), a spinto tenor, in performances as Samson in Saint-Saen’s “Samson et Dalila” and Canio in Leoncavallo’s “I Pagliacci”.

[Below: Wilhelm Meister (Frank Porretta, left) enjoys the hospitality of Philine (Marni Nixon, right); edited image, based on a photograph, courtesy of the Archives of the San Francisco Opera.] 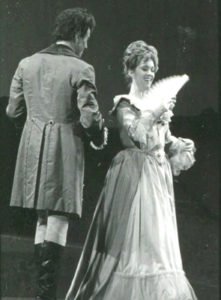 Nixon famously provided the voice for the songs acted by Deborah Kerr in The King and I, by Natalie Wood in West Side Story and by Audrey Hepburn in My Fair Lady.

As Philine she showed off her abilities as a lyric coloratura, particularly in the vocal pyrotechnics of the role’s showpiece aria, Je suis Titania.

[Below: Marni Nixon as Philine performing her homage to Shakespeare’s Midsummer Night’s Dream in “Je suis Titania”; edited image, based on a photograph, courtesy of the Archives of the San Francisco Opera. 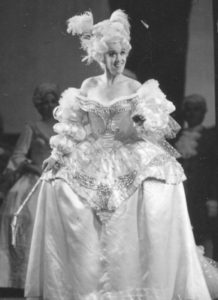 The securing of Nixon for the role of Philine was one of several examples of the eclectic approach to casting shown by San Francisco Opera General Director Kurt Herbert Adler.

Another was the casting of African-American bass-baritone McHenry Boatwright as Mignon’s father Lothario. Boatwright had sung the role of Crown three years prior in a Grammy award-winning of excerpts from George Gershwin’s “Porgy and Bess”, starring William Warfield and Leontyne Price.

[Below: McHenry Boatwright as Lothario; edited image, based on a photograph, courtesy of the Archives of the San Francisco Opera.] 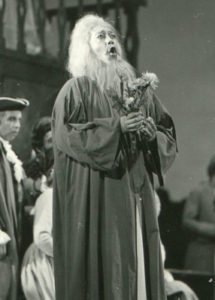 This was still an era when African-American male singers were notably underrrepresented on the world’s opera stages.

Adler, who had assumed the general directorship in 1954, had cast African-American artists in roles associated with their vocal categories, rather than limiting them to roles like Aida and Amonasro in Verdi’s “Aida”, as some other opera intendants preferred to do.

Boatwright was cast as both Lothario and as the Count di Luna in Verdi’s “Il Trovatore” in the 1966 SPOT season.

Others in the cast included Marija Kova in the musico role of the young nobleman, Frederic, and veteran company artists Robert Glover as Philine’s brother Laerte and David Giosso as the gypsy leader, Giarno.

The orchestra was led by Maestro George Lawner, who that year was to begin a 19-year tenure leading Kansas University’s Symphony Orchestra.

The stage director was the 35-year old New Yorker Bliss Hebert. Still in the early years of a long and distinguished career, Hebert was associated with the early years of the Santa Fe Opera and known for his creation of productions of Igor Stravinsky’s operas under the supervision of the composer (and conductor) himself.

[Below: Lothario (McHenry Boatwright, left) intervenes to free Mignon (Helen Vanni, right) from the duties her gypsy band’s leader expected her to perform; edited image, based on a photograph, courtesy of the Archives of the San Francisco Opera.] 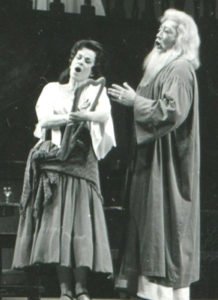 Although it is hard to refute the charge that happens in “Mignon” rarely reflected the concerns of the “modern world”, as we understood those concerns to be in the mid-1960s, Hebert’s direction was very natural and the story-telling reasonably clear.

Carlos Caraval’s Choreography and the Goldstein and Company Costumes

The first act, that featured a balcony on which townspeople could watch a gypsy dance, provided an opportunity for 35 year old California Filipino-American Carlos Caraval, whose interests were ethnic ballet, to choreograph a gypsy dance

[Below: a gypsy dance, choreographed by Carlos Carvajal; edited image, based on a photograph, courtesy of the Archives of the San Francisco Opera. 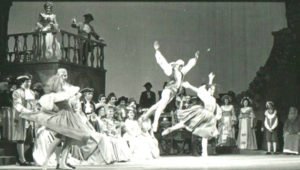 During the 1960s, it was still common for standard repertory operas to be presented in sets that date from the early years of the 43-year old San Francisco Opera.

I suspect the “Mignon” sets whose creator was not listed (Terry Gates was listed as “Scenic Advisor”) were pieced together from other sets dating from the 1930s and 1940s. It seems improbable but not impossible that sets created for the single performances in 1930 and 1934 were stored somewhere for the intervening three decades.

[Below: David Giosso as the gypsy leader, Giarno  edited image, based on a production photograph, courtesy of the Archives of the San Francisco Opera.] 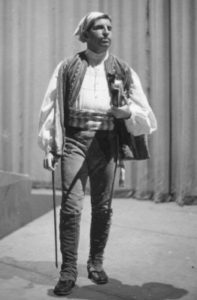 Goldstein and Company, which provided the costumes for the San Francisco Opera for most of its early history, shows as the supplier for both the performances in the early 1930s, but, here again, I suspect that the gypsy costumes were generic to the likes of Verdi’s “Il Trovatore”.

Of all the operas whose live performances I have attended, it is “Mignon” that I have gone the longest without seeing again – not by choice, but for lack of opportunity.

In retrospect, the “Mignon” is part of an early stage of General Director Adler and the San Francisco Opera re-evaluating the late 19th century French repertory, that continued in the subsequent fall seasons with major works of Massenet (including “Esclarmonde” and “Le Cid”) and even Meyerbeer’s “L’Africaine”. It certainly has whetted my appetite for the less often performed French works.

In the 21st century, I have traveled some distances to see French rarities (including four separate casts of Delibes’ “Lakme”, and a trip to Opera Marseille for Lalo’s “Le Roi d’Ys”). I will, of course, have more to say on this subject in future posts.

The next week, the SPOT opera was to be Donizetti’s “Lucia di Lammermoor”.