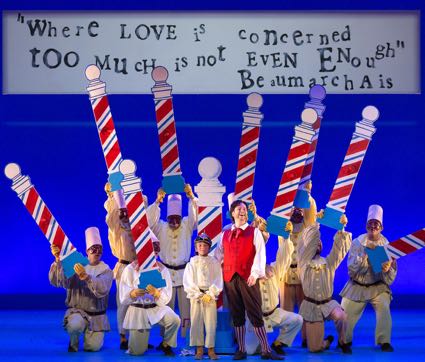 In Zambello’s production, the title character, Figaro, is charmingly played by Canadian baritone Joshua Hopkins. Possessing a rich lyric baritone, command of Rossini’s tongue-twisting patter, and a superb sense of comic timing, Hopkins was mesmerizing in this part.

Hopkins’ Figaro entered from the rear of the audience, his sonorous baritone filling the Alice Busch Theater with the first notes of Largo al factotum, the opera’s most famous number.

[Below: Joshua Hopkins as Figaro; edited image, based on a Karli Cadel photograph, courtesy of the Glimmerglass Opera.] 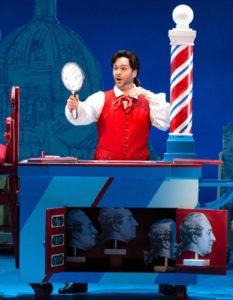 In Zambello’s production, there is no doubt that the opera is about Figaro and the expansive scope of his particular profession as barber (whose services extend far beyond grooming).

[Below: some associates (Glimmerglass chorus of Young Artists) of Seville’s barber gather, joined by the barber’s 11-year old assistant (Rock Lasky, right); edited image, based on a Karli Cadel photograph, courtesy of the Glimmerglass Festival.] 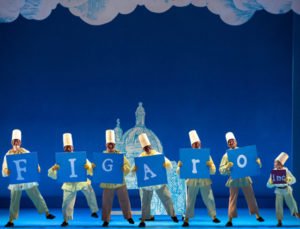 Hopkins’ Figaro has cheerfully agreed (with increasingly large bags of gold appearing to focus Figaro’s attention), to facilitate the face-to-face meeting of the Count Almaviva (David Walton) and the object of the Count’s affection, Rosina (Emily D’Angelo).

D’Angelo was secure in the lower depths of the mezzo voice and sang brilliantly in the heights of Rosina’s wide vocal range.

[Below: Emily d’Angelo as Rosina; edited image, based on a Karli Cadel photograph, courtesy of the Glimmerglass Opera.] 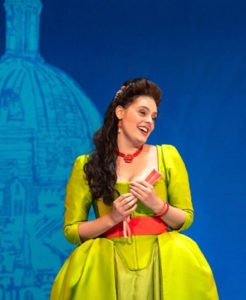 Tennessee lyric tenor David Walton possesses a leggiero voice with coloratura flexibility that Rossini himself expected of his artists.

Walton’s performance suggests that he will make his mark as a “21st century Rossini tenor”, a class of artist that have mastered the vocal agility and expressiveness of Rossini’s works.

[Below: Count Almaviva (David Walton, left) sings as Fiorello (Ben Schaefer) and his musicians accompanies him; edited image, based on a Karli Cadel photograph, courtesy of the Glimmerglass Opera.] 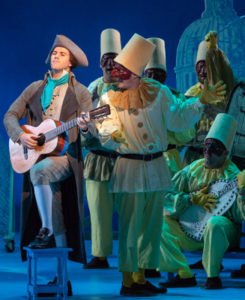 [Below: Figaro (Joshua Hopkins, right), to distract Doctor Bartolo (Dale Travis, left) insists that he have a shave; edited image, based on a Karli Cadel photograph, courtesy of the Glimmerglass Festival.] 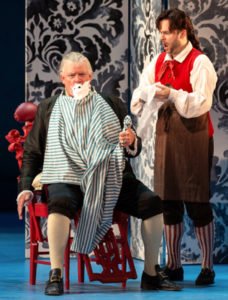 [Below: Don Basilio (Timothy Bruno) demonstrates the explosive effect that a few well-placed rumors of scandal can have on a dignitary’s career; edited image, based on a Karli Cadel photograph, courtesy of the Glimmerglass Festival.] 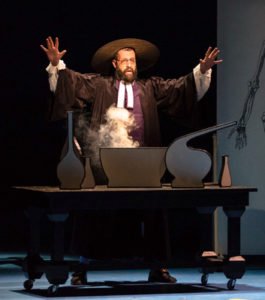 Bruno drew laughs (as all Basilios through the ages expect) in the amusing second act ensemble Buona sera.

Special mention goes to Glimmerglass Youth Chorus member Rock Lasky, who charmed the audience as Figaro’s Assistant. This is the second Glimmerglass Festival season in a row in which Lasky has played a youth in a new Zambello production [see American Premiere Review: A Musically Appealing, Theatrically Arresting “Siege of Calais” Links Donizetti and Zambello – July 16, 2017.]

[Maestro Joseph Colaneri; edited image, based on a publicity photograph for ada-artists.] 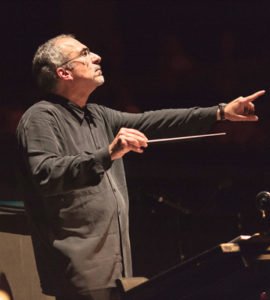 I spoke to Maestro Colaneri about the production’s observation of what had been a traditional cut in “Barber” performances throughout the 19th and most of the 20th centuries – that of Almaviva’s technically complex aria Cessa di piu resistere at opera’s end.

Colaneri explained that he conducted a Metropolitan Opera production of “Barber” in which tenor Juan Diego Florez sang the aria and he recognizes that the cut deprives Almaviva of a big bravura aria to balance those of Figaro, Rosina, Bartolo and Basilio.(I have reported on performances in which not only Florez, but also lyric tenors Barbera, Camarena, Korchak, Osborn and Shrader performed Cessa. For my discussion of the aria’s performance history, see Florez and DiDonato Dominate Los Angeles Opera’s “Barbiere di Siviglia” – December 6, 2009.)

However, Colaneri  is not an advocate of freezing the action for Almaviva to sing Cessa, asserting his authority as a count, instead of his escaping Bartolo’s house with Rosina and Figaro.

Glimmerglass general director Francesca Zambello has had an extraordinary series of productions and production revivals so far in 2018, with much more scheduled for later in the year.

These include a revival of her famous production of Wagner’s four opera “Ring of the Nibelung” at the San Francisco Opera, her production of Bernstein’s “West Side Story” in Houston and Glimmerglass (with future performances in three other cities), as well as productions of other operas in the United States, Lithuania and Chile.

Her “Barber” production, in the light-hearted spirit of Italian commedia dell’arte (with perhaps a dash of the American comic strip), captured the inherent fun of this best known of all operatic comedies. 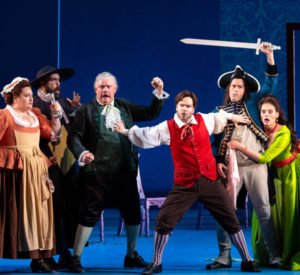 The chorus of Glimmerglass Festival Young Artists are dressed alike as pagliacci. When not performing as choristers, they have a variety of tasks, assisting in the Zambello’s fast-moving stage action (and often moving scenery and props as well.) The minimalist sets were by Connecticut designer John Conklin.

[Below: Figaro (Joshua Hopkins, center right, in red vest) and his assistant (Rock Lasky, center left) celebrate the thoughts of Caron de Beaumarchais; edited image, based on a Karli Cadel photograph, courtesy of the Glimmerglass Festival.] 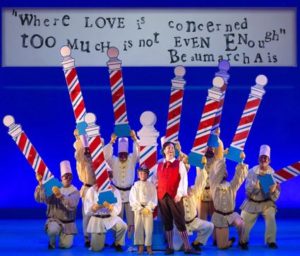 I enthusiastically recommend the cast and production, both for the veteran opera-goer and the person new to opera.