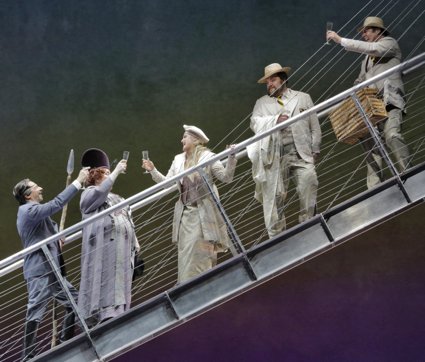 June 2018 marks the San Francisco Opera revival of Francesca Zambello’s ambitious retelling of Wagner’s four opera “Ring of the Nibelungs”. Last seen in San Francisco in  2011, the “Ring” returns in three cycles, each over six days.

I am reporting on the second of this year’s cycles. This is my fourth Zambello “Rheingold” review in the past decade. For my previous in-depth analyses of the production, see the hyperlinks to the previous reviews at this review’s end.

The 2018 “Ring” cycles feature Lousiana baritone Greer Grimsley singing the role of Wotan and  German bass-baritone Falk Struckmann that of Alberich. These are the adversaries whose power battle has resulted in each pursuing (ultimately unsuccessful) strategies that last decades.

Grimley’s character, Wotan, is blinded by the quest for power. Wotan fails to see the incongruity of his being both the universe’s enforcer of contracts and  a person who wishes to “find a loophole” to disregard the terms of his construction contract for Valhalla.

[Below: Greer Grimsley as Wotan; edited image, based on a Cory Weaver photograph, courtesy of the San Francisco Opera.] 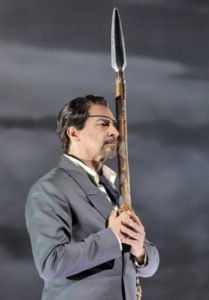 Falk Struckmann, a major European star in the German repertory, proved to be an excellent addition to the Zambello “Ring” family. Struckmann’s impressively sung performance as Alberich was masterfully villainous in his clumsy attempts at “River Maiden” seduction and his sadistic treatment of his brother Mime and Nibelung serfs.

Struckmann’s Alberich evoked some sympathy when tricked by Margita’s Loge and Grimsley’s Wotan, but was terrifying as he unleashed his venomous curse of Nibelung ring.

[Below: Falk Struckmann as Alberich; edited image, based on a Cory Weaver photograph, courtesy of the San Francisco Opera.] 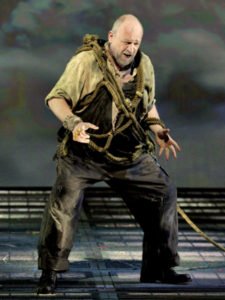 Czech tenor Stefan Margita was the wily demi-god Loge. Margita was secure in the vocally demanding role. His insightful portrayal of a cunning, basically immoral operative, proved the validity of his reputation as a world class singing actor.

[Below: Stefan Margita as Loge; edited image, based on a Cory Weaver photograph, courtesy of the San Francisco Opera.] 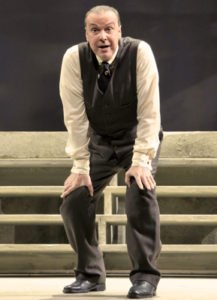 Margita is one of three artists in this performance to have performed the same role in the 2008, 2011 and 2018 San Francisco Opera “Rheingold” performances (along with Andrea Silvestrelli’s Fasolt and David Cangelosi’s Mime.)

Georgia mezzo-soprano Jamie Barton brought her lusciously rich, warm voice to the role of Wotan’s wife, Fricka. A lighter role than the Fricka of the next “Ring” opera, “Die Walküre”, some companies assign different artists to the two Fricka roles. Having the same artist playing both Frickas, however, provides dramatic continuity within a “Ring cycle”.

[Below: Fricka (Jamie Barton, right) with her husband Wotan (Greer Grimsley, left); edited image, based on a Cory Weaver photograph, courtesy of the San Francisco Opera.] 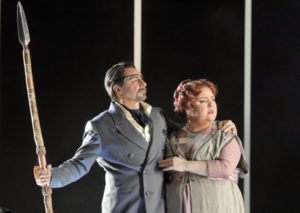 Ohio bass Raymond Aceto was engaging and vocally strong as the suspicious Fafner. A skilled actor, Aceto at first underplays his lumbering character’s aggressiveness, until the fatal moment when he kills his brother for the Ring.

[Below: Fafner (Raymond Aceto, left) and Fasolt (Andrea Silvestrelli, center) announce the completion of Valhalla and thus the need to settle accounts with Wotan (Greer Grimsley, right); edited image, based on a Cory Weaver photograph, courtesy of the San Francisco Opera.] 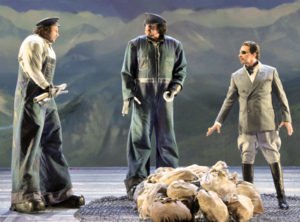 Italian-born American bass Andrea Silvestrelli has made the giant Fasolt, the first victim of the Ring’s curse, one of his signature roles. Silvestrelli, who possesses a deep, sonorous voice, is a tall and imposing figure on any opera stage, even without the stilt boots in which he and Aceto’s Fafner wear.

His character’s gentleness in the presence of the giants’ captive goddess Freia, adds plausibility to one of Zambello’s conceptual masterstrokes, that Fasolt and Freia have developed a “Stockholm Syndrome” romance.

San Francisco audiences have the pleasure of hearing baritone Brian Mulligan and tenor Brandon Jovanovich in principal roles in subsequent operas in the “Ring cycle”, so their welcome appearances as “Rheingold” siblings should be considered “luxury casting”. The power voices and stage presence of Mulligan and Jovanovich in these small roles heightened the appreciation of Wagner’s inspired writing.

Mulligan, who is cast as Gunther in “Götterdämmerung“, sings the thunder god Donner’s brief but familiar He Da.  Brandon Jovanovich, who is cast as Siegmund in “Die Walküre”, appears as the rainbow god Froh.

This was my first opportunity to appreciate fully the vocal power and beauty of Julie Adams, a San Francisco Opera Adler Fellow whose beautiful, powerful voice suggests a future Sieglinde in Wagner’s “Die Walküre”, here cast in the role of Freia. 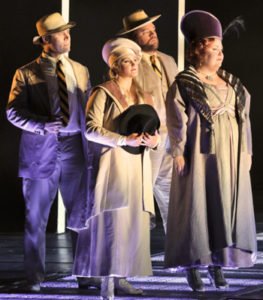 Like Margita as Loge and Silvestrelli as Fasolt, Ohio character tenor David Cangelosi has appeared as Mime in all the 2008 and 2011 performances of the Zambello “Rheingold” as well as being cast in the three 2018 “Rings”.

Mime, who reappears in “Siegfried” as the second longest role in that opera, has two extraordinary functions in the “Ring”. He fashions the Tarnhelm, whose magic can make Alberich invisible or transform him into a shape-shifter; and he raises the hero Siegfried from infancy into adolescence. Never appreciated by either Alberich or Siegfried, the character Mime provides a rich mine of emotions and behaviors for the consummate actor, Cangelosi.

[Below: David Cangelosi as Mime in the Nibelung mines; edited image, based on a Cory Weaver photograph, courtesy of the San Francisco Opera.] 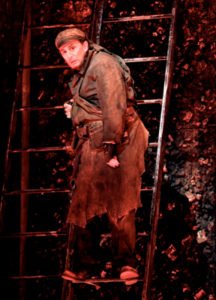 Florida mezzo-soprano Ronnita Miller, another veteran of the 2011 “Ring”, reappeared as the goddess Erda, who warns Wotan of the disasters that will befall him if he continues to possess the Ring. Miller’s resonant voice, whose range descends into contralto territory, gave proper gravitas to a character who knows everything that has ever happened and will ever happen in the future. 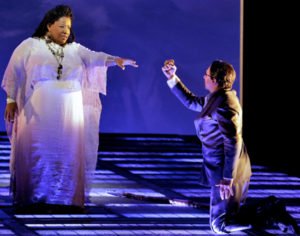 The three River Maidens (the River Rhine being replaced in the Zambello production with a gold-bearing Northern California waterway) were engagingly sung, as they were in 2011, by the trio of Oklahoman Lauren McNeese and Californians Stacey Tappan and Renée Tatum. The attractive trio were convincing in their physical movement, including their seductive teasing of Struckmann’s Alberich. They sang Wagner’s luxurious melodies, often in close harmony, beautifully.

[Below: Lauren McNeese, Stacey Tappan and Renée Tatum are the River Maidens; edited image, based on a Cory Weaver photograph, courtesy of the San Francisco Opera.] 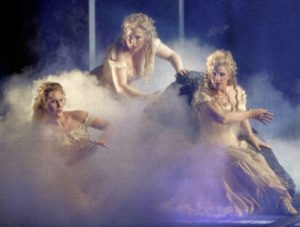 [Below: Maestro Donald Runnicles; edited image, based on a publicity photograph.] 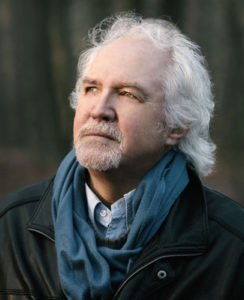 Director Francesca Zambello’s production of the four operas of Wagner’s “Ring of the Nibelungs” has been a joint effort the San Francisco Opera and Washington National Opera. The first three opera productions – “Das Rheingold”, “Die Walküre” and “Siegfried” – premiered at the Kennedy Center, the “Götterdämmerung” and the complete “Ring” premiered at the War Memorial Opera House.

A notable feature of Zambello’s opera productions, exemplified in her “Ring” (that I consider her masterwork), is Zambello’s faithfulness to the opera’s storyline, while transforming the setting in which the story takes place. Sometimes the change makes little difference theatrically (the location of the river, whether the Nibelungs are in the depths of a gold mine or Wagner’s Nibelheim). At other times Zambello’s transformed settings provide new insights into characters and relationships – the relocation of Wotan and Fricka and her sibling gods to a place like the Hamptons in the Great Gatsby era that highlight their self-centeredness and privileged entitlement of the family of gods.

The new settings provide opportunities for brilliant theatrical events. Among the most striking Zambello “Rheingold” production images are two from the final scene. The first image takes place when Brian Mulligan’s Donner creates lightning bolts by lifting his hammer into the sky. 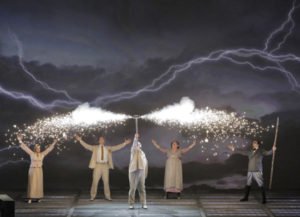 The second remarkable “Rheingold” image is when the gods ascend Froh’s rainbow bridge (envisioned as a gangplank) to their new home.

[Below: the gods, from left to right, Wotan (Greer Grimsley), Fricka (Jamie Barton), Freia (Julie Adams), Donner (Brian Mulligan) and Froh (Brandon Jovanovich) have a champagne toast as they celebrate their entrance into Valhalla; edited image, based on a Cory Weaver photograph, courtesy of the San Francisco Opera.] 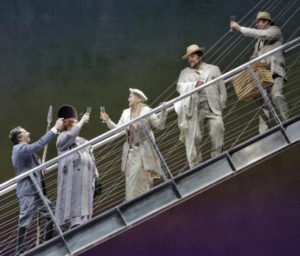 I enthusiastically recommend the Zambello “Rheingold” both for the veteran opera-goer and to the person new to opera interested in seeing a “Ring cycle”.

For my previous reviews of the Francesca Zambello production of “Das Rheingold”, see: