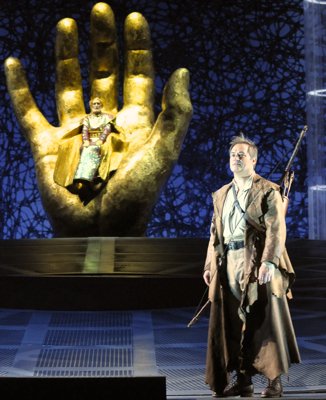 The following conversation was facilitated by through the deeply-appreciated auspices of the Opéra de Lyon, where Paul Groves is scheduled to sing Faust in Boito’s “Mefistofele” in Fall, 2018:

[Below: Lyric tenor Paul Groves; edited image, based on a YouTube photograph.] 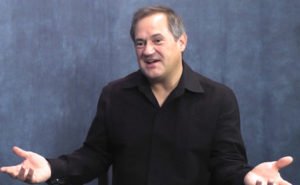 Wm: It’s been seven years since I interviewed you [Master of the Lyric Voice – An Interview with Paul Groves]. When we last talked you were preparing the role of Gualtiero in Vivaldi’s “Griselda” in a production created and staged by Peter Sellars.

The idea of a baroque opera by the Red Priest being staged by Sellars seemed quite a leap conceptually. However, director Peter Sellars  is known for staging unfamiliar operas in mind-bending productions. 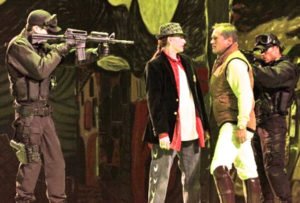 PG: I’ve worked with Peter Sellars for so many years. Peter’s is always looking for a basic concept as a way to make a social statement. Every time we work on a new production, there is a new idea he wishes to focus on.

WHB: In my review of the Vivaldi work [Extreme Makeover: A Vivaldi Revival’s Reveal – Peter Sellars’ “Griselda” at Santa Fe Opera – August 4, 2011], I suggested that there was a dissonance between the plot of the opera that Vivaldi composed and the social statements Sellars was trying to make, but recommended that people see the production, for the cast and Vivaldi’s music, whether or not they related to Sellars’ ideas.

A lot of opera-goers have qualms about staging that depart from the opera’s original storyline. As someone who performs in both “traditional” and “non-traditional” staging of operas, what are your thoughts on this subject?

PG: My entire career has been in an era when acting is as important as singing, so that the stage directors have most of the power.

When I look back on the greatest experiences I remember, it’s the sounds of the voices of great artists, like Plácido Domingo, that gave me goose bumps. I don’t recall ever having goose bumps from the stage direction.

If we start towards every opera being presented as a theatrical production, I believe we can lose the art form.

Wm: There is an inherent difference between theater and opera being performed theatrically.

PG: I agree totally. Unlike theater actors, opera singers cannot be wholly involved in the drama without thinking about their voices.

I’ve always related to sports. No one in sports can take their mind off of the physical performance that their sport requires. Opera singers can’t take their minds off their voices. That’s why so many opera singers want to “stand there and sing”, when a stage director wants them to move.

Wm: I reviewed your performance of Stravinsky’s “Perséphone” at the Opéra de Lyon, in which the Amrita Cambodian dance troupe played a major part in the stage presentation. [Review: Tenor Paul Groves, Cambodia’s Amrita Dancers Add Interest to Stravinsky’s “Perséphone” – Opéra de Lyon, May 20, 2016.] In the case of the Stravinsky, I appreciated the attempt to solve the riddle of how to stage an unfamiliar 20th century French work in a way that would interest 21st century audiences.

You’ve performed in Robert Wilson productions, where his emphasis seems to be on the stage picture, with stylized gestures and emphasis on lighting, rather than the story-telling. 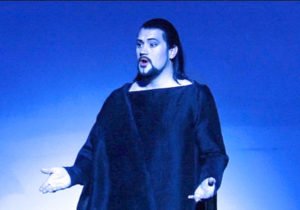 PG: I was Tamino in Wilson’s productions of Mozart’s “Magic Flute” at the Opéra National de Paris and of Gluck’s “Alceste” at Paris’ Théâtre du Châtelet. It’s incredibly difficult to do his productions when you have to sing from an uncomfortable position with arms extended, and you might not be able to move for 14 minutes. We are trained to sing well and to sing beautifully, but to do so you as a singer need to remove tension from your body. It’s very hard to sing in that way.

I recently performed in a Wilson production of Berlioz’ “Damnation of Faust” at the Salzburg Festival. I went to Wilson’s first speech, in which he gave his director’s ideas of how the work should be performed. “There is this shape and there is a sphere”, but we never discussed the text or the relationship between the work’s characters.

Wm: There are stage directors who are respectful of what the artists need to do to produce the right vocal sound and some who are less so. You mentioned Domingo, I was very impressed with the Los Angeles Opera production of Massenet’s “Thaïs” in which you were Nicias, Domingo was Athanaël and Nino Machaidze was Thaïs [Placido Domingo, Nino Machaidze In a Triumphant “Thaïs” – Los Angeles Opera, May 17, 2014.]

Not only was the performance beautifully sung, but Thaddeus Strassberger’s direction was faithful to the libretto and dramatically valid, and Johan Engels’ sets and costumes were wonderful.

I was struck by by Machaidze’s costumes for that production. 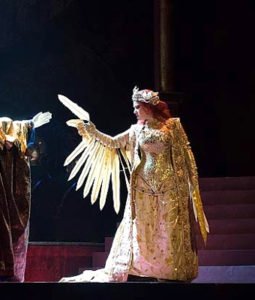 PG: “Thaïs” is a beautiful opera. It has been a great pleasure to have worked with Engels, all of whose set and costume designs, up until his death, have been so inspiring.

When we were preparing “Thaïs”, Engels would watch Machaidze move her arms as she prepared to sing a high note. He said he would design a costume for her that would remind one of a bird’s wings when she reached for her high notes.

When I sang the title role of “Parsifal” for the Lyric Opera of Chicago, Engels designed it as he did the designs for Lyric’s new David Pountney “Ring”.

[Below: Paul Groves in the title role of Wagner’s “Parsifal”; edited image, based on a Dan Rest photograph, courtesy of the Lyric Opera of Chicago.] 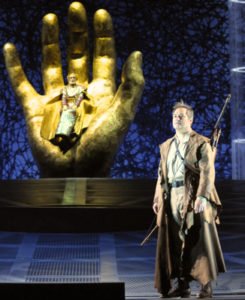 Wm: I have very much enjoyed the results of the Pountney-Engels collaboration including Weinberg’s “The Passenger”  at Houston Grand Opera and Wagner’s “Die Walküre” in Chicago.

One of the legacies of the McKay era as Santa Fe Opera’s general director is that he introduced several of the best known of French operas that Santa Fe Opera had never performed to its performance repertory.

These included the first ever performances of Gounod’s “Faust” and “Roméo et Juliette”, Bizet’s “Pearl Fishers” and Offenbach’s “Tales of Hoffmann”. You, in fact, are the first artist to sing Hoffmann at the Santa Fe Opera.

PG: Since I sing a lot of French repertory, I appreciate what McKay has done.

In Santa Fe, the production’s stage director has only about a week and a half to figure out how to stage the opera with a cast comprised of both experienced opera singers in some of the principal roles and young apprentice artists acting in smaller roles and as the chorus. The “Tales of Hoffmann” director, Christopher Alden, told me to “do your own stuff, but make it look like my stuff”.

Wm: Speaking of the French repertory, you are scheduled to sing the role of Faust in Boito’s “Mefistofele” at the Opéra de Lyon. You have sung the Berlioz and Gounod operatic versions, which are loosely based on Goethe’s “Faust” and now will be singing the Boito version which follows Goethe more closely. What do you see as the differences in the three roles?

PG: As I study Boito’s “Mefistofele”, I am realizing the differences.  In Boito, the Faust character is not the central role. Hence the title, I guess. The central conflict is about God versus the Devil. It is very Italian, of course, certainly much more straightforward than the Berlioz version (which was not intended to be staged). I’ve seen this Opera a few times (all with Samuel Ramey) but wasn’t really taken by it. Now that I’m learning it, I’m finding myself awed by the beauty of the music and the directness of the drama.

The French versions of Faust are much more vague about the intent of the title character. Also, Boito has a scene after Margarita’s death which gives us a bit of insight about what Faust is going through after his love is lost.

The Boito is a very different singing style and a much heavier role. It’s not as much singing as the French versions, and has no extreme high bits like the others, but the challenges are elsewhere. Italian legato and line are a little different than French. The language also dictates this. We’re in good hands with Maestro Daniele Rustioni for this score and I’m looking forward to working on the music with him.

I’ve seen some ideas from our wonderful director Alex Ollé and it promises to be wild, but fun and dramatic. I did his first production of an opera (Berlioz’ “Damnation of Faust”) about 20 years ago and it was certainly a big hit. I’ve never worked so hard, but it was so rewarding.

Wm: In the past I’ve written about the fact that the French versions depart from Goethe in assigning Faust to Hell at opera’s end, whereas Boito has him pray for heaven’s redemption, which, even after many years of being the Devil’s debauched companion, is all he seems to need to be awarded a place in heaven [Faust Damned and Marguerite Saved: Changing Faust’s Fate in Paris.] What do you expect Ollé to do?

PG: I’m of the opinion that one should always pay for his wrongs. Faust knew the consequences when he agreed to the Devil’s contract. I’m not sure how the production is going to end, with Faust in Heaven, in Hell or in American Politics. I know in Boito’s version that Faust goes to heaven, but who knows what we’ll come up with?

Wm: Thanks, Paul. It’s always great to talk with you!