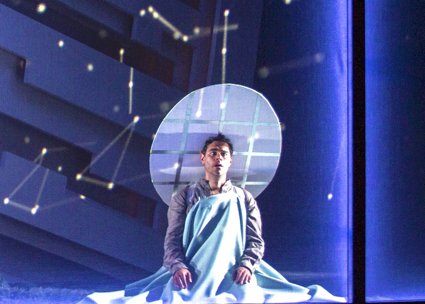 The Spoleto Festival-USA, which encompasses a wide range of performing arts, scheduled two mainstage operas, neither before seen in the United States. One (Donizetti’s “Pia de’ Tolomei”) was from the early 19th century, the other (Lim’s “Tree of Codes”) premiered in Germany in 2016.

Australian composer-librettist Liza Lim’s “Tree of Codes” is inspired by the book of that name by Johnathan Safran Foer, itself derived from Polish author Bruno Schulz’ book The Street of Crocodiles (from whose title, absent ten of its letters, the title of Foer’s book and Lim’s opera derives.)

In this production, the second in the opera’s brief history, the surreal short stories of Schulz, killed in the Nazi holocaust, are the key to understanding the contours of the new production.

Elliot Madore as the Son

The opera and production proved a tour de force for baritone Elliot Madore, whom I regard (I suspect multiple interpretations are possible) as representing Schulz’ son seeking connection with his eccentric father through holes within time during the day after his father’s death.

[Below: The son (Elliot Madore) finds himself in “the margin of secret time”; edited image, based on a William Struhs photograph, courtesy of the Spoleto Festival-USA.] 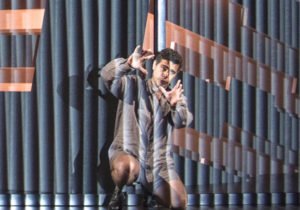 The words that Madore sings are a jumble of thoughts, because Foer has randomly excerpted words from Schulz’ short stories and Lim’s libretto is based on Foer’s excerpts.

Madore’s attractive, lyric baritone is enlisted to convey the disintegration of what remains of the living into what is dead. It is an extraordinary performance requiring a strong sense of the work’s elusive pitches and a memorization of disconnected words and phrases.

[Below: The son (Elliot Madore) longs for intensity, iridescence and epiphany; edited image, based on a WIlliam Struhs photograph, courtesy of the Spoleto Festival-USA).] 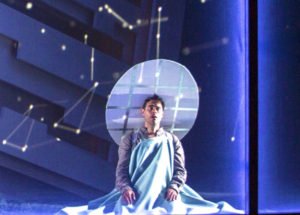 One of the characters in Schulz’ short stories is the servant girl, Adela, who is the other central character in the opera.

[Below: Adela (Marisol Montalvo, left) stands beside the Dresser (Walter Dundervil, right); edited image, based on a William Struhs photograph, courtesy of the Spoleto Festival-USA.] 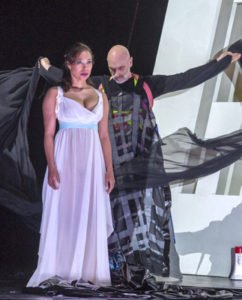 Montalvo was persuasive as Adela. Like Madore’s Son, Montalvo’s Adela has a intricate vocal line whose lyrics are a constant challenge for the performer.

[Below: Eliot Madore (left) is the Son and Marisol Montalvo (right) is Adela; edited image, based on a William Struhs photograph, courtesy of the Spoleto Festival-USA.] 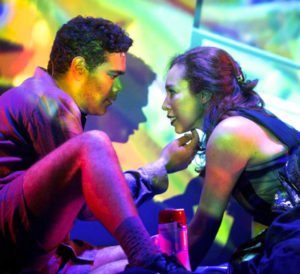 Australian composer Liza Lim, seeking a musical voice for the mysterious phrases of Foers’ book, has created her own sound, mixing tonal and atonal elements, and utilizing several instruments more or less invented for the opera.

[Below: Australian composer and librettist Liza Lim; edited image, based on a publicity photograph.] 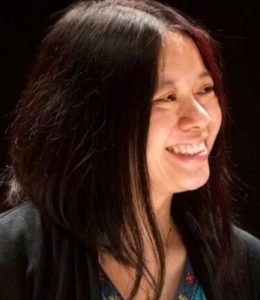 The effect is extraordinary, although I would be surprised if LIm’s approach to operatic writing becomes widely imitated by her operatic contemporaries.

Maestro John Kennedy, who is Music Director of the Spoleto Festival-USA, conducted the complex and often difficult score authoritatively.

Although I was not present for any of the performance of the Opera Cologne’s original 2016 production of Lim’s “Tree of Codes”, I am generally familiar with its elements, which brought Lim’s invented instruments onstage as well as examples of the surreal “pseudo flora” and “pseudo fauna” to which the opera refers.

[Below: Director Ong Keng Sen; edited image, based on a Jouji Suzuki photograph for the Japan Foundation Asia Center.] 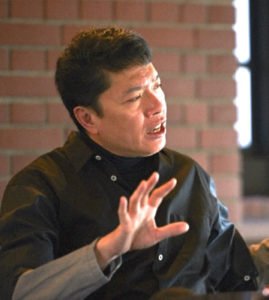 I am convinced that Ong Keng Sen’s choice to refocus the drama to Bruno Shultz’s death at the hand of the Nazis was a decision that greatly increased the opera’s relevance to contemporary audiences, representing the Holocaust through a monolith resembling an important Austrian monument.

The process of refocusing the dramatic center of the opera was helped immeasurably by the set designs of Scott Zielinski, specifically the Holocaust monument that dominates most of the opera’s scenes.

[Below: a scene from “Tree of Codes”; edited image, based on a Webber photograph, courtesy of the Spoleto Festival-USA.] 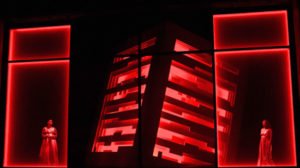 [Below the Son (Elliot Madore) stands below the tower; edteid image, based on a William Struhs photograph, courtesy of the Spoleto Festival-USA.] 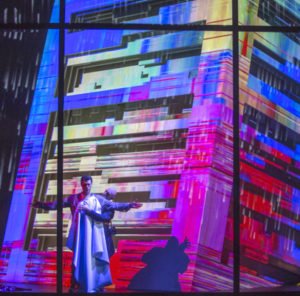 Choreographer/costume designer Walter Dunderville, was present throughout most of the opera, performing the role of the Dresser.

[Below: Costume Designer Walter Dunderville, here performing the role of the Dresser with Adela (Marisol Montalvo); edited image, based on a William Struhs photograph, courtesy of the Spoleto Festival-USA.] 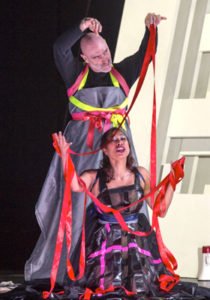 Thoughts on the “Tree of Codes” Opera

Bruno Schulz’ short stories, the ultimate source of Liza Lim’s libretto and Johnathan Safran Foer’s book on which Lim’s libretto was based, might inspire a workable opera libretto a la Offenbach’s “Tales of Hoffmann”.

However, Foer’s process of stringing together randomly excerpted words from those stories challenges the story-telling function that is common to virtually all successful opera libretti.

I can appreciate the extraordinary talents that have gone into realizing Director Ong Keng Sen’s concept of how to produce Lim’s work, and yet be skeptical that Lim’s opera will find a durable place in the contemporary opera repertory.