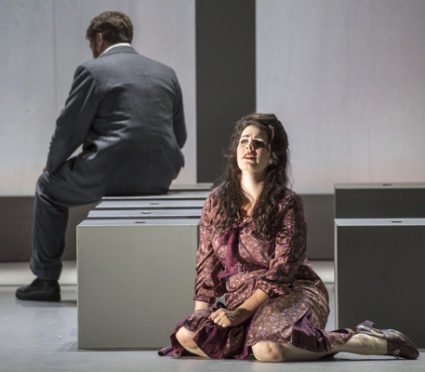 [Below: Pia (Amanda Woodbury, right, facing forward) explains who her suspicious visitor was to Ghino (Isaac Frishman, left, facing away); edited image, based on a William Struhs photograph, courtesy of the Spoleto Festival-USA).] 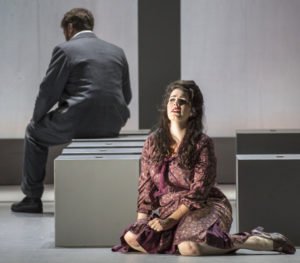 [Below: Rodrigo (Cassandra Zoe Velasco, left), has escaped from prison with the aid of Pia (Amanda Woodbury, right); edited image, based on a Leigh Webber photograph, courtesy of the Spoleto Festival-USA).] 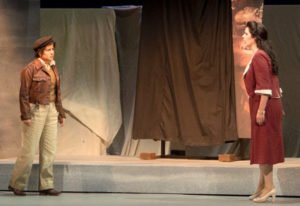 Donizetti lavished some of the score’s finest music on the role of Rodrigo. who has two double arias – both with cavatina and two verses of cabaletta.

Velasco  joins Woodbury in close harmony reminiscent of that sung by Norma and Adalgisa in Bellini’s “Norma”.   As Rodrigo, Velasco participates also in the affecting reconciliation trio with Pia and Pia’s husband Nello at opera’s end.

Latvian lyric baritone Valdis Janson brought vocal beauty to the conflicted character of Nello. (In Cigni’s production, Nellos is a leader of the Italian Fascist party.)

[Below: Valdis Jansons is Nello; edited image, based on a Leigh Webber photograph, courtesy of the Spoleto Festival-USA).] 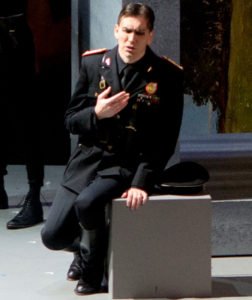 Jansons employed his attractive lyric baritone and acting skills in a difficult task, making the character of Nello credible to 21st century audiences.  Although Nello deeply loves and is reciprocally loved by Pia, his sense of honor requires that he murder her on the chance that rumors of her infidelity might be true. (Even if he was deliberately deceived, Shakespeare’s Othello, to whom the character of Nello is sometimes compared, required a much higher bar of proof of Desdemona’s infidelity than Nello did of Pia’s alleged transgressions.)

[Below: Nello (Valdis Jansons) expresses his love for the dying Pia (Amanda Woodbury, left); edited image, based on a William Struhs photograph, courtesy of the Spoleto Festival USA.] 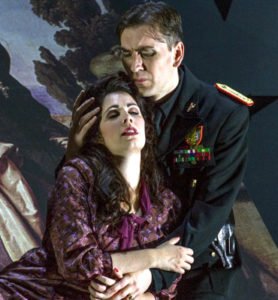 I do think that Jansons redeemed the character as much as possible in the final reconciliation trio in which Nello’s love of Pia and remorse at his role in her impending death overcame his concerns about Pia brother’s politics or his own honor.

Leggiero tenor Isaac Frishman sang the role of Ghino stylishly. (His dialogue in the first scene includes the most famous melodic phrase in the opera, which coincidentally or deliberately reappears as the Amami Alfredo theme in Verdi’s “La traviata”.)

[Below: Ghino (Isaac Frishman), disastrously, is persuaded by an unfounded rumor, leading him to make a false accusation; edited image, based on a William Struhs photograph, courtesy of the Spoleto Festival-USA).]

In a machismo world with a warped sense of what constitutes “honor”, one would expect a 21st century audience to sympathize with the forces of resistance to that world. Those forces, besides Pia’s brother Rodrigo, are Pia’s companion Bice (ably sung by Vera Savage) and Lamberto (performed with passion by Matthew Anchel).

[Below: Lamberto (Matthew Anchel, center) explains the preparations for Pia’s brother’s jailbreak to Pia (Amanda Woodbury, right) and her companion, Bice (Vera Savage, left); based on a Leigh Webber photograph, courtesy of the Spoleto Festival-USA).] 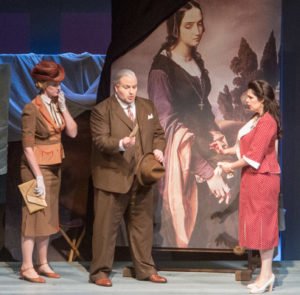 Maestra Lidiya Yankovskaya presided over the Spoleto Festival USA Orchestra in a reverential performance of Donizetti’s musically resplendent score. Utilizing the fruits of the recent scholarship creating critical editions of Donizetti’s scores, she made a strong case for “Pia’s” musical worthiness.

[Below: Maestra Lidiya Yankovskaya; edited image, based on a photograph, from lidiyayankovskaya.com.] 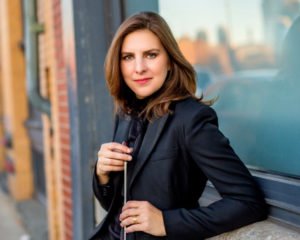 The Westminster Choir performed with distinction.

[Below: the “Pia de’ Tolomei” chorus (members of the Westminster Choir) caught in a rainstorm; edited image, based on a production photograph, courtesy of the Spoleto Festival USA.] 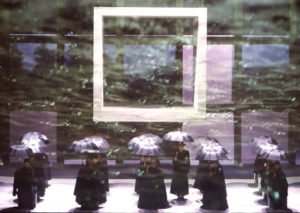 Dario Gessati’s sets proved serviceable, consisting of a large moveable square at the center of the historic Sottile Theatre stage, and a back wall that allowed lighting of individual characters or massed choristers, permitting rapid scene changes. For film buffs, there were occasional homages to classic Italian films.

With no performance history in North America, the Festival was able to advertise its performances “Pia de’ Tolomei” as the opera’s American premiere.

Composed a year after Donizetti’s most durable opera, “Lucia di Lammermoor” and a year before “Roberto Devereux”, an opera which has found a place in the standard international opera repertory, “Pia” reflects Donizetti’s mastery of dramatic invention, without straying too far from his era’s melodic conventions.

“Pia”, like “L’Assedio di Calais [The Siege of Calais]”, another opera Donizetti composed the same year, has suffered some scorn by operatic entrepreneurs and critics that see “Calais” and “Pia” as reverting to older operatic styles, including male roles being played by musicos, women (often mezzo-sopranos or contraltos), rather than writing the roles for heroic tenors with brilliant high C’s, that were the rage in Italy by the early 1830s.

However, composers in the Italy of the 1830s produced operas on commission from opera companies, and were expected to utilize the opera stars of the companies commissioning their work. If the opera company had a star musico, it likely would insist one of the important male roles be assigned to her.

For “Pia”, it was decided that the role of Pia’s brother Rodrigo would be created and given plot prominence for Venice’s star musico. Thus “Pia” gained a reputation of being backward-looking, and elevating a minor male character (Rodrigo), sung by a woman, to the opera’s central plot.

[Below: Rodrigo (Cassandra Zoe Velasco, center, in tan-colored pants) leads the resistance; edited image, based on a William Struhs photograph, courtesy of the Spoleto Festival-USA).] 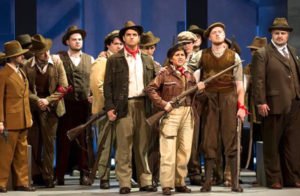 From a 21st century perspective, it is the characters of Nello and Ghino, and the code of male “honor” – interpreted to require death sentences on women who, deliberately or inadvertently, offend that male sense of honor – that are the backward-looking features of the opera.

I have deep respect for both Donizetti and his librettist Salvatore Cammarano (who, besides “Pia” wrote the libretti for the operatic hits “Lucia di Lammermoor” and Verdi’s “Il Trovatore”). However, I believe “Pia” has one character too many, and I would have eliminated that of Ghino, and had Ubaldo relay the suspicions about Pia’s mysterious visitor to Nello.) Other essayists on this opera are strong defenders of the character of Ghino, who sings some of Donizetti’s most eloquent writing for the tenor voice.

I prefer the performing editions that contain all of the music Donizetti wrote for the opera. It is the task of the production designer and director to sort out how to stage the opera and what “messages” to emphasize for contemporary audiences.

21st century opera audiences should find sympathy with the resistance forces standing against the world represented by Ghino and Nello, highlighted in this production by setting the opera in the Italian Fascist era.

[Below: Director Andrea Cigni; edited image, based on a publicity photograph, from andreacigni.it.] 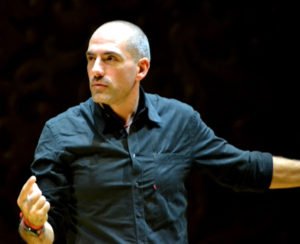 Italian director Andrea Cigni has  tackled “Pia’s” perceived dramatic flaws through the time-shift to the fascist era, with Nello a fascist leader, Rodrigo the leader of the resistence and Pia’s affections split between her fascist husband and her resistance-leading brother.