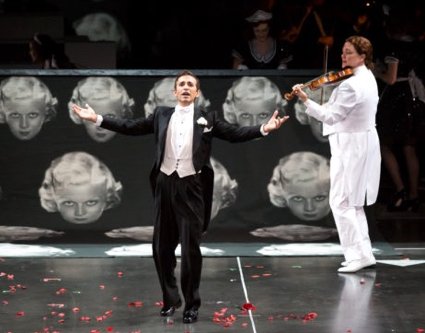 The following interview took place through the arrangements of the Houston Grand Opera, whose facilitation of this interview is appreciated. This is posted in coordination with the Spoleto Festival USA, where Costanzo will perform in concert. 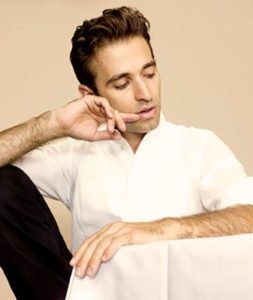 The staging was moved from an opera stage to an exhibit hall within the mammoth George R. Brown Convention Center where the orchestra shared the stage with the artists and the sets. This had to require an enormous amount of work on the part of the City of Houston’s recovery team, the Houston Grand Opera, the director and musical performers to bring it off.

ARC: It is amazing that they brought it all together. There were a lot of problems. I’ve been involved in producing shows, and know that to launch any show requires constant problem-solving.

What are your thoughts on that opening performance?

ARC: What a wonderful event this was, even though we had to cut up James Robinson’s production and then put it back together. In the past I have performed opera in unconventional settings. These performances can feel very special in a way.

It’s almost as if this particular production was chosen to be presented in the aftermath of a hurricane. It was wonderfully poignant to be singing Caesar’s aria in which he asks the winds to blow peace into his heart. It was cathartic. 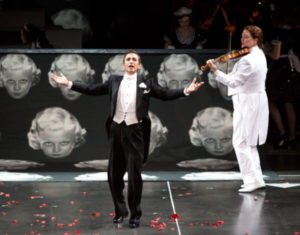 Wm: As a child and young teenager, you performed in several Broadway shows and movies, including “A Christmas Carol”, the touring company of Rodgers’ and Hammerstein’s “The Sound of Music” and James Ivory’s movie A Soldier’s Daughter Never Cries, but it seems that your participation in the 1995 New Jersey Opera Festival production of Britten’s “Turn of a Screw” performing the role of Miles was particularly important to your career.

Of your performance, New York Times classical music reviewer, Anthony Tommasini wrote “[A]s Miles, the gifted boy soprano Anthony Roth [Costanzo] triumphed. His Miles was an impish, likable kid caught up by forces he did not understand. You ached for him. But when he involuntarily adopted the swagger and leering gestures of his tormentor Quint, you feared him.”

I’d like to discuss Miles. “Turn of the Screw” is based on the Henry James novella whose elements are deliberately designed to be an inexplicable ghost story. Something seems to have happened to Miles, but it is never explained what that is. What was the impact on you as a young boy, performing such an intense role?

Ultimately, we don’t know whether the characters Peter Quint and Mrs Jessel are real or are only in the Governess’ head, but I do believe that the boy Miles suffered a trauma of some kind that was real, and, because the Governess realizes this, she becomes very close with the boy.

Wm: I understand that “Turn of the Screw”, your introduction to opera performance, influenced your thinking about theater.

ARC: Performing Miles was a really thrilling experience. Coming from Broadway, I was struck by how much more complex and layered the stories in opera are and the different levels in which you can engage their stories.

ARC: Opera is all about conveying a dramatic narrative, and an operatic performance communicates with audiences in ways that only the best movies and live theater do. Opera doesn’t leave any part of itself at home.

Wm: I understand that your appearance in the New Jersey Opera Festival was a life-changing experience.

ARC: The most important outcome was that the conductor of “Turn of the Screw”, Maestro Michael Pratt, said to me “If you want to go to college at Princeton, I’m on their faculty”, and that is what I did.

Opera’s influence on me was reinforced further by Luciano Pavarotti’s Opera Extravaganza at Philadelphia’s Academy of the Vocal Arts when I was chosen to sing the role of the Shepherd Boy in Act III of Puccini’s “Tosca” with Pavarotti as Mario Cavaradossi.

Wm: Your success at Princeton University led to your being selected by the Manhattan School of Music and ultimately to Joan Patenaude-Yarnell becoming your voice teacher. You have described your developing voice as naturally a baritone voice of average interest that was overshadowed by the strength of your countertenor voice. But then throat surgeries seemed to threaten your career.

ARC: I was 26 years old when I was diagnosed with thyroid cancer. I actually had to have surgeries. It’s scary for an artist. You didn’t know whether you even will be able to talk, let alone to sing opera. I had had a great countertenor voice. Working with Joan Patenaude-Yarnell, we very slowly ramped back into singing.

Wm: Yet, only four years later you had not only recovered, but had won major national competitions and were at the top of your game at Plácido Domingo’s Operalia. Explain what Operalia is like and some of the important ways it has advanced your career.

ARC: I performed in Operalia in 2012 in Beijing. Plácido Domingo is inspiring. They took such care of us. The exposure is fantastic.

[Below: Plácido Domingo (fourth from left) with the 2012 prizewinners of his Operalia Contest, held in Beijing, including three Americans, first place winners Anthony Roth Costanzo (second from right ) and Janai Brugger (fourth from right ) and second place winner Brian Jagde (second from left); edited image of a publicity photograph for Operalia.] 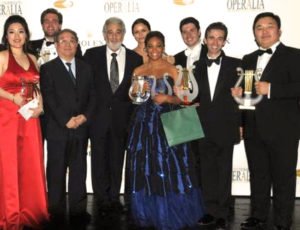 Operalia is modeled after the Olympics. Domingo asked the organizers to use a system for rating artists just as the Olympics rate performing athletes. You have to contend with the pressure. You have judges who are the best casting agents.

Wm: One of the greatest experiences I’ve had the opportunity to review was the 2013 Glimmerglass Festival’s production of Pergolesi’s “Stabat Mater” as an operatic performance, in which you, Nadine Sierra and all the supporting singers were opera singers who danced. All of the dancing was designed by choreographer Jessica Lang. This all is consistent with Glimmerglass Festival General Director Francesca Zambello’s conviction that opera singers should be good dancers as well as good singers. What was that experience like for you?

ARC: When we were creating the choreography, I wanted to be part of the dancing. I pushed Jessica to teach the singers to become dancers, because it is artistically more impressive.

I participated in the revival of that production recently in Lincoln Center.

[Below: Anthony Roth Costanzo (front) in the Lincoln Center revival of Jessica Lang’s Glimmerglass Festival production of Pergolesi’s “Stabat Mater”; edited image, based on a Kevin Yatarola photograph for the Lincoln Center.] 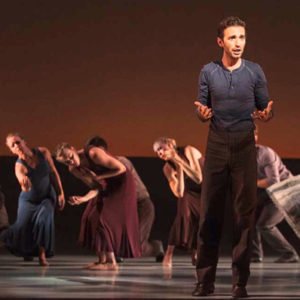 Wm: My most vivid memory of your dancing was as Armindo in the San Francisco Opera mounting of Christopher Alden’s production of Handel’s “Partenope”.

ARC: Christopher Alden had seen a YouTube video of me tap-dancing in a special feature at the Glimmerglass Festival. He asked me if I would like to tap-dance in “Partenope”. He also added the bit where I fall down the stairs. It can be advantageous when a revival is being staged by the original director, who has the liberty to make changes.

Wm: The structure of Handel’s operas, with the arias that concentrate on particular emotions, opens those operas to a wide variety of dramatic presentations.

ARC: I think that the production of Handel’s “Rodelinda” at the New York Met was incredibly successful. Stephen Wadsworth is a wonderful director. Handel is so malleable. The stories are about psychology more than plot, so it’s very open to being re-contextualized. Handel lends itself to an auteur director.

Wm: And you appreciate working with an auteur director!

ARC: All of the directors I work with extraordinary directors. All share a strong vision of what they want the final product to be and yet they want to create each artist’s character with that artist.

As an artist I can propose how the character should act at a given point, and the director can say “your instincts are good here, but there your instinct is wrong. You need to trust me that you don’t have to do anything there.” Collaboration is important to me – that I’m working with a director who is not trying to prescribe everything from a preconceived idea.

Wm: I also find it significant that you move between baroque opera and contemporary works.

I reviewed the world premiere of Heggie’s “Great Scott” and your wonderful interpretation of the stage director Roane Heckle. 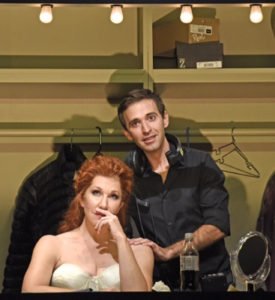 Since then you’ve performed the title role of Glass’ 21st contemporary opera “Akhnaton”, several baroque roles, including “Julius Caesar” but also the roles of First Angel and Boy in Benjamin’s “Written on Skin” at Opera Philadelphia, after which you are performing the classical role of Orfeo in the Florida Grand Opera production of Gluck’s “Orfeo et Euridice”. This is an extraordinary balance between old and new.

[Below: Anthony Roth Costanzo as the Boy in “Written on Skin”; edited image, based on a Joseph Pisano photograph for Opera Philadelphia.] 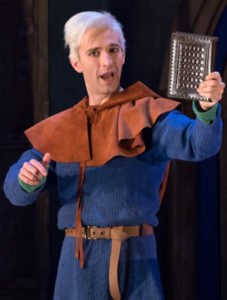 ARC: I think there are a lot of countertenors that stick to the baroque, but I like to do contemporary works as well.

Over the past I’ve worked with several different composers and I do I lot of new works. I love telling composers about how to approach the vocal line for me. It’s very exciting when a composer has you in mind when they are writing the part you are going to create. It’s about the composer understanding who you are.

When Decca Gold asked me to record an album, I suggested that I do a CD that was half arias by baroque composer Handel and half by contemporary composer Philip Glass. The result was one of the best musical experiences I have had.

Wm: I appreciate spending this time with you.