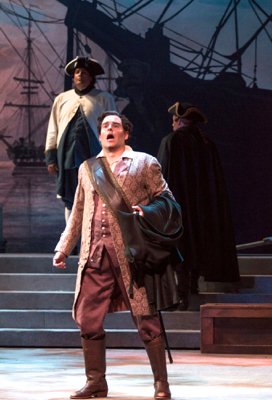 For the Sarasota Opera’s 2018 Winter Festival, the company presented its first performances ever of Puccini’s “Manon Lescaut”, the composer’s only major repertory work previously missing from the company’s performance repertory.

[Below: Manon (here, Sandra Lopez, left) with the Chevalier des Grieux (Matthew Vickers, right) in the second act of Puccini’s “Manon Lescaut”; edited image, based on a Rod Millington photograph, courtesy of the Sarasota Opera.] 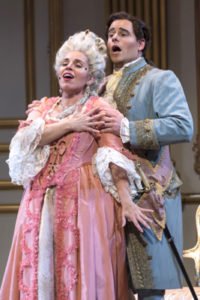 Zhanna Alkhazova’s Assumption of the Role of Manon

New York soprano Sandra Lopez, who had performed the title role for the previous six performances, was feeling unwell but would try to soldier through the seventh of eight scheduled performances.

If Lopez’ first notes held some promise, a few minutes into Manon’s first appearance at the Amiens public square in Act I, Russian soprano Zhanna Alkhazova, who was the cover for soprano Sandra Lopez, received the signal that Lopez was unable to continue.

The plot requires that Manon leave the Amiens square, enter an adjacent inn and then to return to the square for a rendezvous with the Chevalier des Grieux. Alkhazova was in place in the Sarasota Opera orchestra pit as Lopez returned to the stage for her Manon’s escape to Paris with her newfound lover. 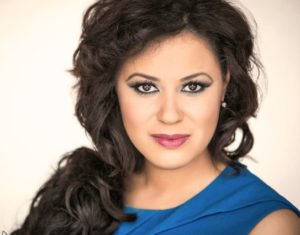 However, instead of Lopez singing the soaring duet with Matthew Vickers’ des Grieux, Alkhazova sang Manon’s part from the orchestra pit singing Lopez was mutely acting the role onstage. For the final three acts Alkhazova was onstage, in costume, and in healthy voice.

“Manon Lescaut”, dating from 1893, is the earliest example of a full-length multi-act verismo opera to hold its own in the world’s performance repertory (Mascagni’s 1890 “Cavalleria Rusticana” and Leoncavallo’s 1892 “I Pagliacci” are both relatively short one act operas.)

Pennsylvania spinto tenor Matthew Vickers masterfully performed as the Chevalier des Grieux, a role that contains some of the most glorious music the Puccini wrote for the tenor voice.

Vickers excelled with the Chevalier’s two major arias in the first act, and one each in the second and third, and inpired duets with Alkhazova’s Manon throughout the opera.

[Below: The Chevalier des Grieux (Matthew Vickers), his plot to rescue his lover in disarray, decides to join her in Louisiana; edited image, based on a Rod Millington photograph, courtesy of the Sarasota Opera.] 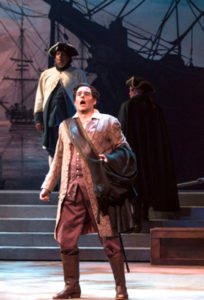 I had admired Vickers’ thrilling performances as Avito at the 2017 WInter Opera Festival [see Review: Sarasota Opera’s Affectionate Mounting of “Love for Three Kings [L’Amore dei Tre Re]” – March 11, 2017.] Designated this season as the David and Edith Chaifetz Endowed Artist, Vickers appears to be in the early years of an important career.

The opera’s comprimario roles were well cast. New York bass-baritone Costas Tsourakis, who this winter season is alternating the role of the womanizing wealthy tax collector Geronte with Lieutenant Zuniga in Bizet’s “Carmen”, proved once again that he is not only impressive vocally, he is also a superb character actor.

South Korean bass Young Bok Kim, who performed the principal role of Oroveso in the winter season’s “Norma” with distinction, was luxury casting for two smaller parts in “Manon Lescaut” – the Innkeeper and a Sergeant of the Archers.

Swiss studio artist, tenor Sean Christensen, was impressive in the first act as the student Edmondo, in later acts performing the roles of the Dancing Master and a Lamplighter. Ohio studio artist, mezzo-soprano Annie Chester, sang the role of a Castrato with elegance. Michigan studio artist, bass-baritone Peter Morgan, was a Naval Captain. Apprentice Artist Jonathan Harris was a Hairdresser.

Maestro Victor DeRenzi and the Saratoga Opera Orchestra and Chorus

Victor DeRenzi conducted with sensitivity to the melodic sweep of Puccini’s verismo style. The chorus, with important assignments in each of the first three acts, consisted of the Sarasota Opera Apprentice and Studio Artists.

Director Stephanie Sundine staged the opera effectively, showing confidence in the composers’ and librettists’ intentions. The sets by David P. Gordon evoked different aspects of ancien regime France, and suggested the desolation of the early 18th century Louisiana as imagined by Puccini, his librettists and their ultimate source material, the Abbé Prévost and his 1731 “L’Histoire du chevalier des Grieux et de Manon Lescaut“.

[Below: The Chevalier des Grieux (Matthew Vickers) unsuccessfully searches for water in Louisiana; edited image, based on a Rod Millington photograph, courtesy of the Sarasota Opera.] 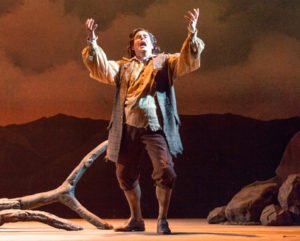 (I’m actually in Louisiana while writing this review, and doubt that there is any desolate spot in the Southern part of this state where Act IV is supposed to have taken place where it would be impossible to find water, but I always warn persons not to try to learn history or geography from the stories that comprise opera.)

The Sarasota Opera, inspired by its Artistic Director, Maestro Victor DeRenzi, has had extraordinary success in promoting the works of Giuseppe Verdi. In the past two seasons he has mounted worthy productions of later operas from the operatic style known as verismo – Montemezzi’s “L’Amore dei Tre Re” and Puccini’s “Manon Lescaut” in Italian and d’Albert’s “Tiefland” in German.

[Below: The Sarasota Opera House; edited image of a publicity photograph.] 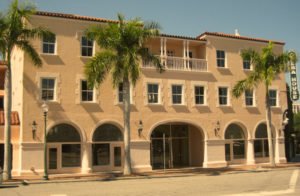 I highly recommend that attendance at future Sarasota Winter Opera Festivals be considered by both veteran opera goers and persons new to opera but interested in the operatic repertory beyond the nine or ten “safe” operas  – three by Mozart (“Marriage of Figaro”, “Don Giovanni” and “Magic Flute”), three by Puccini (“La Boheme”, “Tosca” and “Madama Butterfly”), one or two by Verdi (“La Traviata” and perhaps “Rigoletto”), and one each by Rossini (“Barber of Seville”) and Bizet (“Carmen”) – that consitute the core repertory of so many opera companies.