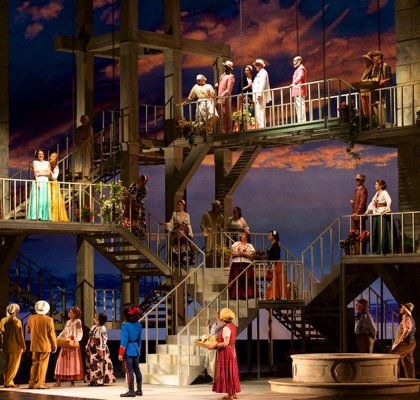 This review of the second performance will discuss the Beatrice and Benedict of Hanna Hipp and Andrew Owens, the other members of the “opera” and “Shakespeare” casts, the production and the musical performance.

[Below: Benedict (Andrew Owens, left) finds himself at odds with Beatrice (Hanna Hipp, right); edited image, based on a Jacob Lucas photograph, courtesy of the Seattle Opera.] 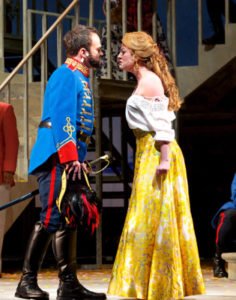 Owens possesses an appealing lyric tenor voice, which blended nicely with Hanna Hipp’s warm mezzo. The artists proved convincing both as antagonists and as lovers.

[Below: all resistance to public display of their love for each abandoned, Benedict (Andrew Owens, center) passionately kisses Beatrice (Hanna Hipp, below) despite the “I told you so” jesting of Don Pedro (Daniel Sumegi, standing right) and Hero (Shelly Traverse, standing left); edited image, based on a Jacob Lucas photograph, courtesy of the Seattle Opera.] 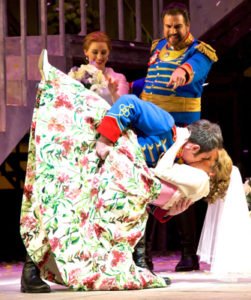 Soprano Shelly Traverse sang the role of Beatrice’s cousin, Hero, in an unscheduled Seattle Opera debut as a principal when Laura Tatulescu withdrew from the entire run because of illness.

Much of Berlioz’ most beautiful music is assigned to the female voice. Hero, the fiance of Craig Verm’s Count Claudio, is the beneficiary of Berlioz’ exquisite melodic style with such examples as the aria Je vais le voir (At last he’s here in Amanda Holden’s English translation)

Traverse has been a member of the Seattle Opera Chorus since 2015. Her performance as Hero demonstrates not only that she is ready for principal opera assignments, but suggests the depth of talent  that is present in the major American opera choruses.

In addition to Hero’s At last he’s here (repeated at opera’s end, after the reconciliation of Hero and Claudio, with new emotional intensity) Traverse sings a sublime duo-nocturne with Florida contralto Avery Amereau, who plays Hero’s companion, Ursula.

[Below: Hero (Shelly Traverse, right) and Ursula (Avery Amereau, left) perform a duo-nocturne; edited image, based on a Jacob Lucas photograph, courtesy of the Seattle Opera.] 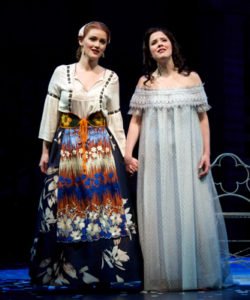 In luxury casting, New York bass Kevin Burdette was assigned the part of the pompous Somarone – a Berlioz invention thought to be directed at his pedantic detractors – not present in the Bard’s comedy.

The presence of a non-Shakespearean character in Berlioz’ opera allowed Langs and company to assign to Samarone several of the plot points in the restored sub-plot without having to expand the opera’s cast of characters.

Burdette, in a conversation I had with him last month when he was singing Don Alfonso in the Seattle Opera’s “Cosi fan Tutte” [Sex and Opera in Seattle: A Conversation with Basso Kevin Burdette] noted that in addition to being the conductor Samarone as envisioned by Berlioz, he also took on lines and activities that Shakespeare had assigned to Leonato’s brother Antonio, to the constable Dogberry, and to a night watchman and gardener.

Burdette performed all these new facets to Samarone’s personality with vocal skill and superb comic timing.

[Below: Kevin Burdette as Somarone; edited image, based on a Jacob Lucas photograph, courtesy of the Seattle Opera.] 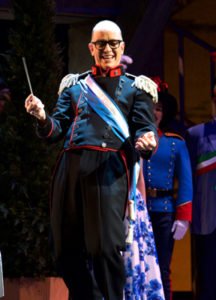 Australian bass Daniel Sumegi rounded out the cast as Don Pedro, the Prince of Arragon. Well-regarded for his performances in Wagner [World Treasure: Seattle Opera’s Gripping and Glorious “Götterdämmerung” – August 9, 2013] and Verdi [Review: A Second Look at “Luisa Miller” at the San Francisco Opera – September 27, 2015], Sumegi showed dignity in the affable role as well as a solid vocal performance.

In addition to roles performed by opera singers, the Claudio subplot required the restoration to the story of several other characters that Berlioz had cut. Actors from Seattle’s A Contemporary Theater [ACT], of which John Langs is Artistic Director, and other local theater groups were enlisted for these roles.

[Below: Leonator (Marvin Grays, center) joins Don Pedro (Daniel Sumegi, right) and Claudio (Craig Verm, second from right) in a conversation about a woman in love with Benedict (Andrew Owens, hiding behind shrub, left) that they intend for him to overhear; edited image, based on a Jacob Lucas photograph, courtesy of the Seattle Opera.] 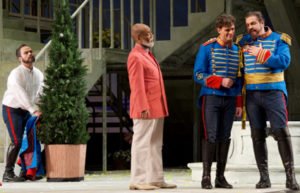 The “villain roles” of Don John and his henchman Borachio were taken respectively by Washington actor Brandon O’Neill and Arkansas actor Avery Clark. Both men were the recipients of the good-natured booing of villains at opera’s end that one now expects of North American opera audiences.

[Below: Matthew Smucker’s set designs for the city of Messina; edited image, based on a Jacob Lucas photograph, courtesy of the Seattle Opera.]

The sets, repurposed from Robert Dahlstrom’s sets for Seattle Opera’s 2008 production of Bellini’s “I Puritani”, and brilliantly lit by Michigan lighting designer Connie Yun, project a much sunnier image than their previous representation of the English Civil War.

The costumes, with a late 19th century Mediterranean feel are designed by Washington director Deborah Trout.

Maestro Ludovic Morlot and the Seattle Opera Orchestra and Chorus

The city-wide Celebration of Shakespeare provided the opportunity for the Seattle Symphony’s musical director Ludovic Morlot to take on a project with the Seattle Opera.

[Below: Maestro Ludovic Morlot; edited image, based on a publicity photograph, courtesy of the Seattle Opera.] 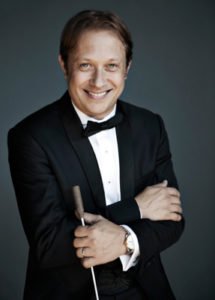 Himself a strong proponent of Berlioz’ music (and hailing from Berlioz’ region of France), Maestro Morlot supervised the process of selecting music from other Berlioz vocal works to augment the opera.

The resulting performance was beautifully conceived, with both the Seattle Opera Orchestra and Chorus performing with distinction.

I recommend the opera to the veteran opera-goer and person new to opera, and to lovers of Shakespearean plays who should find the amalgam of Berlioz’ opera and Shakespeare’s play to be a fascinating evening.