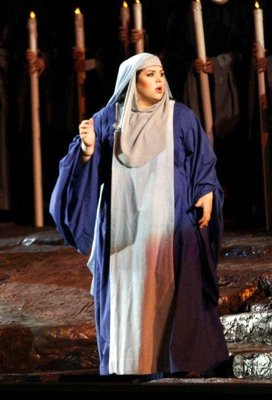 The following conversation follows up on a previous interview [see: Rising Stars: An interview with Leah Crocetto.] 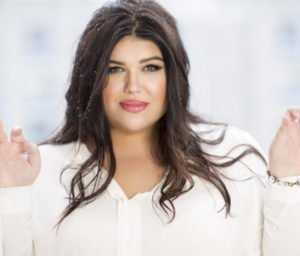 Wm: Since we last talked, you’ve had some career milestones, including your role debut as Aida in a new production of Verdi’s “Aida” and the Western Hemisphere premiere of Donizetti’s’ The Siege of Calais” for Director Francesca Zambello.  I’d like to discuss the Verdi first.

Obviously, Verdi has been and will continue to be a centerpiece of your recent and upcoming schedule of performances. You’ve performed Elisabetta di Valois in “Don Carlo” at Opera Philadelphia and Aida in a new Zambello production at the San Francisco Opera and the Washington National Opera and will perform it again at the Seattle Opera.

You also performed Leonora in “Il Trovatore” at the Arena di Verona (Italy) and will perform it again at Oper Frankfurt (Germany) and Elisabetta di Valois at the Washington National Opera.

Do you find any special challenges in singing these iconic Verdi roles?

[Below: King Philip II (Eric Owens, right) has begun to doubt the fidelity of Elisabetta di Valois (Leah Crocetto, left) in the 2015 Opera Philadelphia production of Verdi’s “Don Carlo”; edited image, based on a Kelly & Massa photograph for the Opera Philadelphia.] 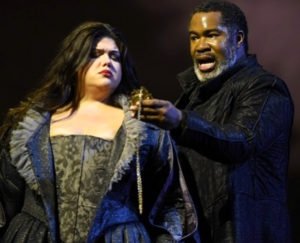 LC: First of all I feel incredibly grateful to have been gifted the voice to sing these incredibly iconic roles and Verdi’s glorious music. I pinch myself every time! Francesca Zambello has been an incredible mentor to me and has given me many opportunities to bring portray these heroines. The biggest difficulty I find in bringing these ladies to life is wrapping my head around the stories and giving them relevance. This is where Francesca comes in and beautifully breathes life into archaic stories.

There is also the vocal aspect. In my past, I have often gotten stuck comparing myself to other singers, but this does not do me any favors. So embracing my vocal timbre and what I have to offer as a Verdi singer or a lirico-spinto soprano has been key for me in gaining success in this repertoire.

Wm: Continuing on the subject of Verdi’s operas, you have performed the title role of his “Luisa Miller” at the San Francisco Opera in another Zambello production. We’ve discussed how dramatic you found her staging of that final scene with you and Michael Fabiano as Rodolfo.

When I interviewed you in Santa Fe, you spoke of the several years you left vocal performance to take acting courses. In working with a director like Francesca with her emphasis on acting, did you find that your formal training in acting helped you in developing the character of Luisa that Francesca had envisioned, or the other characters you’ve developed with her? 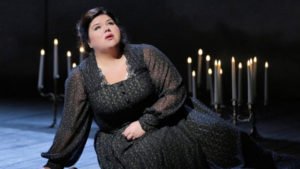 LC: Oh yes, definitely. My acting training has immensely helped in my portrayal of these characters. The way Francesca approaches these operas and the way we work together in bringing them to life is definitely done from an acting viewpoint. She expects the singer to be an actor and to grab onto the character, full-on. There is no way around it. She expects greatness and that makes me work harder to get there, and to find the moments and intricacies within the character and the relationships with the other characters.

The ending of “Luisa Miller” is a PERFECT example of this. Michael Fabiano and I developed the scene with absolutely no inhibitions in the rehearsal process. We tried things, and we were there for each other every step of the way.  Things happen on stage that may change it up a little bit each night and that is an adventure, but is also the reason it is so important to approach the staging and the lyrics from an actor’s perspective. So you can flow with the opera and character as the production progresses each night.

The Aida was also an incredible challenge and an amazing process for me.  Francesca and I had many a discussion about character development and what Aida was feeling, and how she would react to different scenarios.  I was so happy to be available to step into the Aida again in Washington DC, it gave me the opportunity to build on the character we had already established and push a little deeper. I could go on and on all day about character development.

[Below: Aida (Leah Crocetto, standing center right) is warned by her father, Amonasro (George Gagnidze, standing center left in green shirt) not to reveal his identity; edited image, based on a Cory Weaver photograph, courtesy of the San Francisco Opera.] 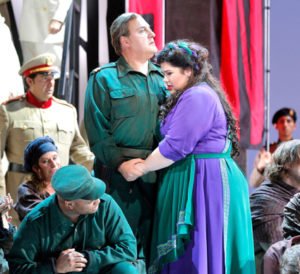 Wm: I’ve long been an admirer of Francesca’s work, but was especially impressed with her discovery of the dramatic potential of Donizetti’s “The Siege of Calais”, whose Western Hemisphere premiere took place at the Glimmerglass Festival 180 years after its original premiere in Naples. I’m interested in your thoughts on that opera.

LC: Francesca showed her true genius in this production, I think. This was so fully thought-out. No detail was left unturned. We explored every avenue of this story.

It all came together at Glimmerglass. “The Siege of Calais” is full of some of the most beautiful music. The subject is poignant and relevant for today, and my colleagues knocked it out of the park! This production managed to tell the story without getting in the way of the music.  There was amazing space for us to make bel canto lines.

Donizetti wasn’t very happy with the ending of this opera, so we chose the alternate ending with the big scena for the soprano! It was very exciting!

Wm: Donizetti had wanted to write the opera for one of his superstar tenors, but the Naples opera company didn’t have a tenor he liked, so wrote it for a mezzo-soprano. This caused opera companies to ignore the opera, because they considered musico roles (except those written by Mozart) to be old-fashioned.

However, casting Aleks Romano as Aurelio was masterful. With her physical performance, rapelling down the walls of the besieged town, it was like I was watching a Navy SEAL.

[Below: Eleonora (Leah Crocetto, left) expresses support for her husband Aurelio (Aleks Romano, right) in his dangerous missions in the 2016 Glimmerglass Festival Western Hemisphere premiere of Donizetti’s “The Siege of Calais”; edited image, based on a Karli Cadel photograph, courtesy of the Glimmerglass Festival.] 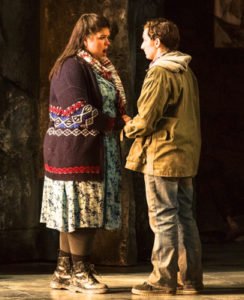 LC: Oh Aleks! She is amazing and I was so happy to have her as my partner in this piece.  I have essentially watched Aleks grow up in opera. Our first meeting was during Poulenc’s “Dialogues of the Carmelites” at WNO. She was a young artist and carried a cross and maybe had one line, and now, look at her. She is becoming a star.

She worked really hard for this role and was at the gym almost every day working on aspects of her body that she knew she was going to have to use. We all were. This production was super physical and I took up Olympic-style weight lifting during this run as well. It truly helped with stamina and physicality.

Wm: It wasn’t just the time-shift that made the opera work. Francesca and Maestro Joseph Colaneri showed how powerful Donizetti’s music can be. Many conductors and directors cut the strettas and cabaletta repeats, but Francesca showed that you can stage them so that both the stretta and the repeated cabaletta move the action forward.

LC: Absolutely. Joe Colaneri is a genius, and would joke that Donizetti came to him in his dreams and the next day we would have created something unbelievable. We worked so hard on variations and ornamentation to make the music stand alone. And then, to add in the staging…it was truly an artistic cornucopia. I was honored to be a part of this. 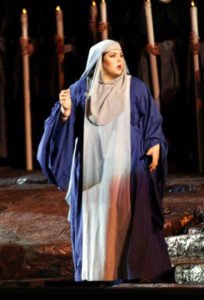 Wm: You mentioned in our past interview that before you were accepted into the San Francisco Opera Merola Program, you took part in the Sarasota Opera young artists program. I didn’t ask what that experience was like.

LC: That experience was extremely difficult for me as my father was battling an illness that eventually took his life while I was at the program. I won an award while I was there – best actress. The most valuable thing that program did for me was to teach me the discipline that I have used throughout my career, and it gave me one of my best friends on the planet.

Several of your San Francisco Opera colleagues from past years currently are performing here, including former Adler Fellow Brian Jagde as Calaf, and, from your 2008 Merola class, David Pershall who sings Lescaut in Massenet’s “Manon”.

Last month, you sang the title role in another Puccini work, “Tosca” at the Pittsburgh Opera in its elegant Benedum Theater, to the Scarpia of another former Adler Fellow, Mark Delavan.

Do you feel a camaraderie with colleagues with whom you have shared similar San Francisco Opera early career experiences?

LC: Oh, the camaraderie is incredible. Brian and I have been through a lot together, and the roads we’ve walked have brought us together in amazing ways onstage. Seeing David Pershall stand so strongly in his role in “Manon” was exciting as well. He and I were in the scene concert together during Merola, and we performed Donizetti’s “Don Pasquale” – Act 2. He was Malatesta and I was Norina. We had a BLAST! There is always going to be a bond with Merola Class of 2008 alumni. We see each other all over the world and it’s like no time has passed. My best friends, to this day, are from my Merola and Adler years.

Wm: As we discussed in the previous interview, you are singing roles from such stylistically diverse composers as Mozart, Donizetti, Verdi and Puccini. I’m looking forward to your further exploration of the repertory of the famous trio of bel canto composers – Rossini, Donizetti, and Bellini – but am intrigued that you are singing several Puccini heroines – Tosca, Liu and Mimi in “La Boheme”.

Do you envision delving further into Puccini’s works, and, beyond him into the repertory of other verismo composers? 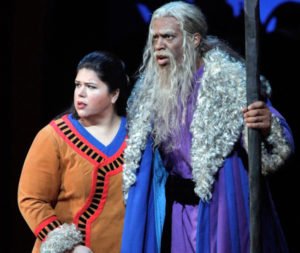 LC: It is so important to keep the repertory varied, in my opinion. I love singing Puccini. I love the vocal line it brings; the long phrases and the sweeping line. At the same time, I love singing the bel canto repertoire as well. It keeps the voice healthy, youthful, and agile. I am adding the title role of Bellini’s “Norma” into my repertoire, as well as some other Donizetti works. My future will be rich with bel canto.

[Below: Floria Tosca (Leah Crocetto, left) is determined to resist her attempted seduction by the Baron Scarpia (Mark Delavan, right) in the Pittsburgh Opera’s 2017 production of Puccini’s “Tosca”; edited image, based on a photograph for the Pittsburgh Opera.] 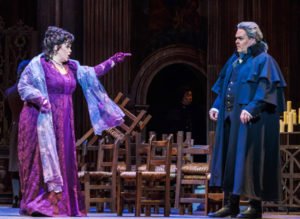 Singing Tosca was a dream come true. I have never sung a role that was so right for me, temperamentally. I am very proud of the work I did on that role, being guided by Director Garnett Bruce and Maestro Antony Walker. It was a dream. I have a few more Toscas on the docket for the future as well. As far as other verismo repertoire, I will definitely be adding in some more Puccini roles, along with Maddalena in Giordano’s “Andrea Chenier” and many others, as well as keeping Mozart as a regular presence.

Wm: Thank you for your time, Leah.