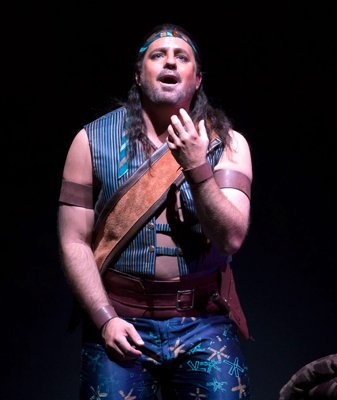 Chicago’s Lyric Opera mounted Dame Zandra Rhodes’ exotic production of Bizet’s “The Pearl Fishers” with a stellar cast led by Matthew Polenzani as Nadir, Marius Kwiecien as Zurga, Marina Rebeka as Leila and Andrea Silvestrelli as Nourabad. Each of the three principal artists (Leila, Nadir and Zurga) who form a triangle of love and friendship have hauntingly beautiful music to sing.

Nadir’s first act aria Je crois entendre encore, with its luxuriously exotic harmonies and pianissimi high in the tenor range, should be a highlight of any “Pearl Fishers” performance. Polenzani provided such a highlight, with a richly expressive aria, whose pianissimi were stunningly beautiful.

[Below: Matthew Polenzani as Nadir; edited image, based on a Todd Rosenberg photograph, courtesy of the Lyric Opera of Chicago.] 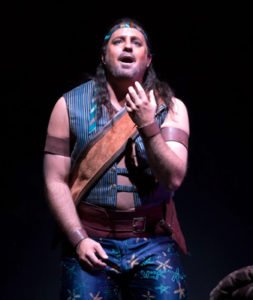 For a previous review [Matthew Polenzani Triumphs in Pelly’s Take on “Tales of Hoffmann” – San Francisco Opera, June 5, 2013], I wrote that “Polenzani . .  has grown into the great lyric roles of French and Italian opera that permit the tenor voice to soar”.

Polenzani’s Nadir is yet another example of a French opera role of which Polenzani exhibits total mastery. A renown interpreter of the Mozart roles that require intensive breath control [Polenzani and DiDonato Triumph as McVicar Illumines “La Clemenza di Tito” – Lyric Opera of Chicago, March 11, 2014], which Polenzani enlists for Je crois entendre encore, his soaring voice filled the Lyric auditorium for the tenor part of the famous duet Au fond du temple saint and much of Nadir’s vocal line.

Equally impressive was Polish baritone Mariusz Kwiecien’s Zurga, who in the course of the opera is Nadir’s best friend, rival for the love of the priestess Leila, enemy, and, at the end, in Lyric’s staging, is killed for facilitating Nadir’s and Leila’s escape.

[Below: Mariusz Kwiecien as Zurga; edited image, based on a Todd Rosenberg photograph, courtesy of the Lyric Opera of Chicago.] 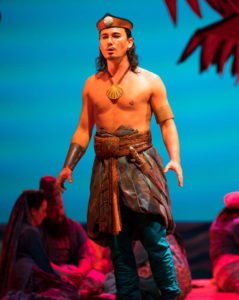 Kwiecien is one of the finest lyric baritones of our time and one of opera’s most intelligent actors. Any Kwiecien performance is a treasured experience [see, for example, Mariusz Kwiecien in Reverential, Resplendent “King Roger” – Santa Fe Opera – August 3, 2012]

Kwiecien was a memorable Zurga. In the hands of some interpreters, the role of Zurga seems to have minimal interest beyond the baritone part of Au fond du temple saint, but Kwiecien made the role dramatically rich and vocally impressive throughout.

Kwiecien summoned sympathy with an eloquently sung L’orage s’est calme, in which his mood shifts from rage at Nadir – whom he has condemned to die – to reflection on their lifetime friendship. Throughout the evening, he was mesmerizing in Andrew Sinclair’s staging (that included a non-textual assassination at opera’s end by the agents of the high priest Nourabad).

[Below: Marina Rebeka as Leila; edited image, based on a Todd Rosenberg photograph, courtesy of the Lyric Opera of Chicago.] 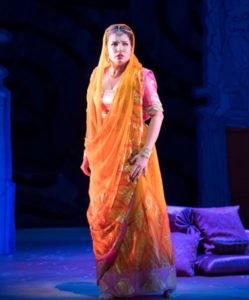 [Below: Andrea Silvestrelli as Nourabad; edited image, based on a Todd Rosenberg photograph, courtesy of the Lyric Opera of Chicago.] 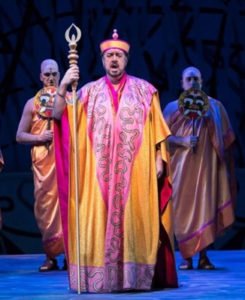 Sir Andrew Davis and the Lyric Opera Orchestra and Chorus

Under Davis’ passionate direction, both the Lyric Opera Orchestra and Lyric Opera Chorus performed superbly. The evening proved to be an affectionate presentation of Bizet’s youthful work.

In a month in which Wagner’s “Die Walkure” and Bizet’s “Pearl Fishers” were in rotation, Sir Andrew Davis was on the podium for all performances of each opera.

The production is by British artist and designer Dame Zandra Rhodes (whose pop-culture fame was established  during the late 1970s punk era). The production was commissioned by the San Diego Opera in 2004 and mounted by both the San Diego and San Francisco Operas [See A new look for Bizet’s “Pearl Fishers”: Zandra Rhodes in San Diego & San Francisco and Castronovo, Siurina Lead Magical San Diego Opera “Pearl Fishers” – May 9, 2008.]

The team of Andrew Sinclair (director) and John Malashock (choreographer), both of whom helped create the original 2004 production, were instrumental in the revival.

[Below: The Malaschook dancers perform; edited image, based on a Todd Rosenberg photograph, courtesy of the Lyric Opera of Chicago.] 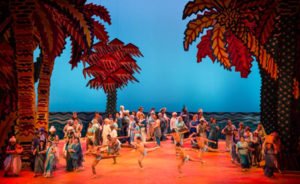 Since my reviews of her “Pearl Fishers” and her production of Verdi’s “Aida” [Liudmyla Monastyrska, Issachah Savage Lead Strong “Aida” Cast – Houston Grand Opera, November 1, 2013], Zandra Rhodes has received Queen’s Honors (2014) and is a Dame Commander of the British Empire.

[Below: Zurga (Mariusz Kweicien, right) has set fire to his village as a distraction enabling him to free Nadir (Matthew Polenzani, left) and Leila (Marina Rebeka, second from left); edited image, based on a photograph, courtesy of the Lyric Opera of Chicago.] 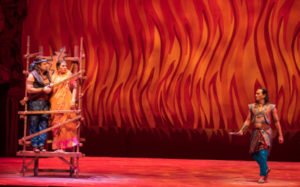 The favorable audience responses to all these productions suggests to me that other “exotic” operas from the French repertory would meet with success if given a chance.

I enthusiasitcally recommend this cast and Lyric Opera’s revival of the Zandra Rhodes production for both the veteran opera-goer and the person new to opera.