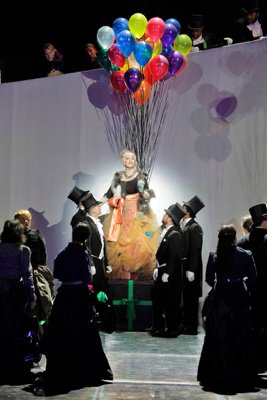 Previously, I had reviewed the San Francisco Opera’s opening performance of its new production of Massenet’s “Manon” [Review: An Exquisitely Sung “Manon” with Ellie Dehn and Michael Fabiano – San Francisco Opera, November 4, 2017]. I returned to the War Memorial Opera House for the fifth of six “Manon” performances.

[Below: Manon (Ellie Dehn, right) and her cousin Lescaut (David Pershall, bottom left, partially obscured) react to the paper money that swirls around them; edited image, based on a Cory Weaver photograph, courtesy of the San Francisco Opera.] 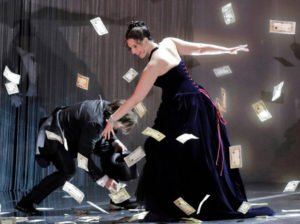 In my previous review, I gave high marks to the vocal performances of each of the principal singers – Ellie Dehn as Manon, Michael Fabiano as the Chevalier des Grieux, David Pershall as Lescaut, James Creswell as the Comte des Grieux and Robert Brubaker as Guillot.

In the fifth performance, Fabiano was feeling unwell and, after a virtually unnoticeable indication of vocal distress in the Saint Sulpice scene, had the opera company management announce that he would continue his performance despite feeling ill. Even so, Fabiano’s performance was extraordinary, full-voiced, passionate, convincingly evoking the character’s youthful emotions.

[Below: the Chevalier des Grieux (Michael Fabiano, left) has convinced himself that life with Manon (Ellie Dehn, right), rather than in a monastery is the future he desires; edited image, based on a Cory Weaver photograph, courtesy of the San Francisco Opera. ] 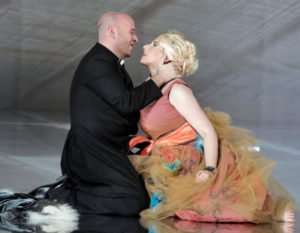 Each of Fabiano’s colleagues performed with distinction, Ellie Dehn sumptuous soprano conveyed the substance of a ambitious young girl whose attentions are split between the pursuit of love and the pursuit of riches, in the bargain losing her life; Pershall’s solid Lescaut neatly framed an amoral youth on the make; and Creswell’s deep bass illuminated with whom ultimate authority in the Des Grieux household rested.

Composer Giacomo Puccini, whose opera “Manon Lescaut” covers some of the same ground as Massenet’s, but also makes use of other sections of Prevost’s novel, referred to Massenet’s work as “all powder and minuets”. Puccini’s aphorism was always unfair, because Massenet’s work is intensely concentrated drama, each of its six scenes immersed in sexual attraction and attempted conquest, unconditional love and betrayal, resignation, regret, revenge, and death. (I regard the second act of Puccini’s “Manon Lescaut” as having more powder and minuets than all of “Manon”.)

[Below: Lescaut (David Pershall, center) surrounds himself with women; edited image, based on a Cory Weaver photograph, courtesy of the San Francisco Opera.] 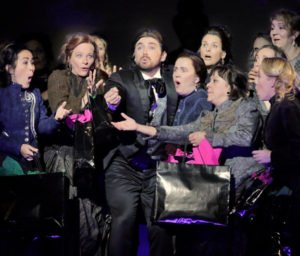 Seeing Vincent Boussard’s production performed a second time gave me an opportunity to evaluate Boussard’s ideas  and to reflect further on Massenet’s iconic French opera. It’s clear that Boussard intended to unmoor the opera from its ancien regime origins and to emphasize the universality of the opera’s themes.

One of my acquaintances remarked that the production didn’t seem “very French” (although he changed his mind after the Saint-Sulpice scene). Having a French conductor (and Massenet advocate) Patrick Fournillier and a French director and production creator, Vincent Boussard, makes a good case for French authenticity.

[Below: Manon (Ellie Dehn, center, descends from the wall holding a bouquet of balloons; edited image, based on a Cory Weaver photograph, courtesy of the San Francisco Opera.] 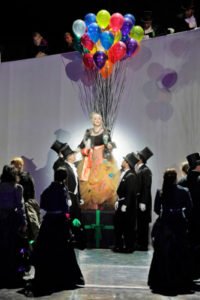 Boussard, while not actually changing the period in which the opera is supposed to take place, has deliberately incorporated anachronistic costuming schemes and visual images to emphasize the universality of the themes of the opera.

The production’s central idea, the downward sloping wall, is present in every scene, reminding one of the walls one sees in Paris and in provincial towns. Often, the upper bodies of principal characters or Parisian or provincial crowds are seen behind it. For the second scene, the Chevalier des Grieux’ Rue Vivienne apartments, miniature structures representing buildings in Central Paris line the wall.

The furnishings are minimalist. A few dozen straight-backed wooden chairs are placed against wall in the first act coach stop. Some of these chairs reappear for the parishioners for the Saint-Sulpice service. The Royal Ballet is represented by a canopy (no performance of the ballet itself was included in this production). The gambling scene takes place behind a beaded curtain.

[Below: Manon (Ellie Dehn) stands underneath a canopy that represents a performance of the Royal Ballet, the performance an unappreciated gift paid for by a lecherous admirer; edited image, based on a Cory Weaver photograph, courtesy of the San Francisco Opera.] 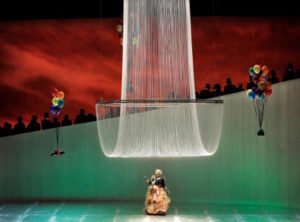 Boussard effectively uses the forward spaces created by the omnipresent wall. “Manon” abounds in consecutive short musical vignettes, and Boussard’s staging focuses audience attention on what is occurring at each moment. When a crowd of travelers search for their luggage at the coach stop, there is a bustle of travelers and their luggage in center stage. When des Grieux first spots Manon, the coach stop is empty, except for the lovers to be.

This kind of staging has a cinematic feel, as if whatever is occurring at center stage is a “close-up” of the action.

[Below: a crowd gathers outside the gambling casino, observed by Manon (Ellie Dehn, far right) and Chevalier des Grieux (Michael Fabiano, second from right); edited image, based on a Cory Weaver photograph, courtesy of the San Francisco Opera.] 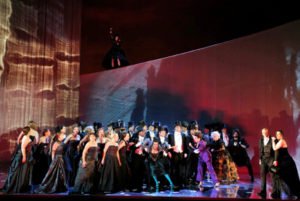 In the past dozen years, I have reported on four mountings of three productions of “Manon”, including Sir David McVicar’s that sets the opera, as Massenet (and his literary source, Abbe Prevost) specified, in France during the 1720s. [See Kaufmann Astonishes, Dessay Enraptures, in McVicar “Manon”: Lyric Opera of Chicago – October 15, 2008 and Review: A Magnificent “Manon” starring Ailyn Pérez and Stephen Costello – The Dallas Opera, March 4, 2016.]

In contrast, Vince Paterson’s production [“Thriller”: Paterson Links with Netrebko, Villazon and Domingo in L. A. “Manon” – October 5, 2006], shifts the story to Paris during the 1950s.

Boussard steers a different course from that of productions that retain the original time period, like McVicar’s, or those that shift to a different period of history, like Paterson’s. All three ways of presenting “Manon” demonstrate the dramatic essence of Massenet’s music and setting of Prevost’s timeless study.

Beginning in 1971 the San Francisco Opera dedicated several years to productions of Massenet’s works – “Manon” (1971 and 1981), “Esclarmonde” (1974), “Werther (1975 and 1978) and “Le Cid” (1979). In subsequent decades “Cendrillon” and “Herodiade” were both mounted. This “Manon” hopefully will begin a new period of attention at this important opera company to Massenet’s operas and of 19th century French opera.