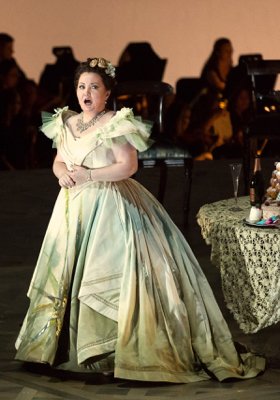 In the aftermath of August’s devastating Hurricane Harvey, the Houston Grand Opera, forced to move out of it Wortham Center home for several months, created a new venue, the HGO Resilience Theater, within the George R. Brown Convention Center. The cast, orchestra and stage settings were moved to the temporary facility, adjusting stage sets, lighting design and orchestra placement to accommodate the new home’s very different physical structure.

The role of Violetta was assumed by the Russian soprano Albina Shagimuratova.

Her first act showpieces were executed with authority. She demonstrated a controlled, vocally expressive legato in the poignant Ah, fors e lui.  Her Sempre libera demonstrated the command of coloratura fireworks in that has made her Queen of the Night in Mozart’s “Magic Flute” a signature role.

[Below: Albina Shagimuratova as Violetta; edited image, based on a Lynn Lane photograph, courtesy of the Houston Grand Opera.] 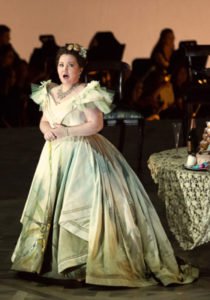 Shagimuratova was affecting in her emotional final aria Addio del passato, an aria she credits with inspiring her love of opera [See Rising Stars: An Interview with Albina Shagimuratova.]

[Below: the dying Violetta (Albina Shagimuratova) reflects on the transitory nature of life; edited image, based on a Lynn Lane photograph, courtesy of the Houston Grand Opera.] 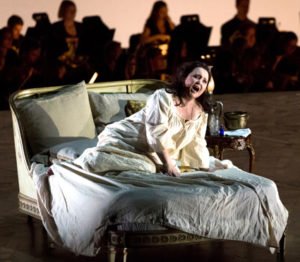 [Below: Dimitri Pittas as Alfredo Germont; edited image, based on a Lynn Lane photograph, courtesy of the Houston Grand Opera.] 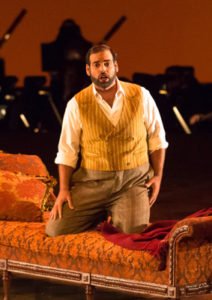 Pittas’ last act duet with Shagimuratova Parigi, o cara, in which Alfredo still had hopes that Violetta would survive, was beautifully sung.

Romanian baritone George Petean played Alfredo’s father, giving an authoritative performance of a character that wins audience sympathy as the opera progresses. His second act duets with Violetta and his aria Di provenza il mar sung to Alfredo were performed with distinction. 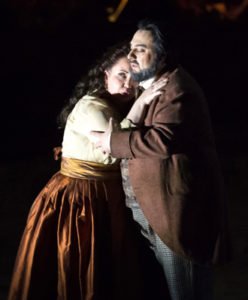 There are several named comprimario roles that inhabit the parties that occur in Act I and the second scene of Act 2. 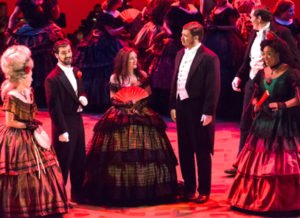 The death scene includes the quintet that was usually cut in mid-20th century performances but is now routinely performed, in which Shagimuratova, Pittas and Petean are joined by Austrian/New Zealander Anthony Robin Schneider as Doctor Grenvil and Ukrainian-born soprano Yelena Dyachek as Annina.

HGO’s “La Traviata” represents the American debut of Korean conductor Eun Sun Kim. Conducting the HGO Orchestra, located at the rear of the stage behind the singers and chorus, had its particular challenges, because conductors and opera singers expect to be facing each other in a normal performance.  Yet, the outcome was a smoothly flowing performance, appropriately fast-paced, while showing sensitivity for Verdi’s melodic lines.

[Below: Maestra Eun Sun Kim; edited image, based on a  photograph, from eunsunkim.com.] 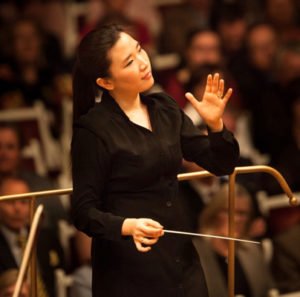 The physical structure of the Resilience Theater required compromises in the scenic design of Arin Arbus’ production, the sets for the country estate in which Violetta and Alfredo pursued their love affair and the final scene of Violetta’s death both sparsely furnished. It is the interaction of the three principals rather than their surroundings that propel these scenes. 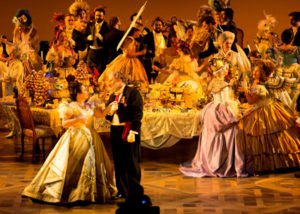 Almost half of “Traviata” takes place in the midst of well-attended parties, each of which was successfully staged. The entertainment at Flora’s part was particularly notable with dancers representing “matadors from Madrid” incorporating puppets representing the skeletal remains of bulls into their dances. The puppets returned in the final scene in the dying Violetta is aware of Carneval revelers (in the aisle between audience seats and the stage) outside of her room.

[Below: the party guests are entertained by a troupe of dancers; edited image, based on a Lynn Lane photograph, courtesy of the Houston Grand Opera.] 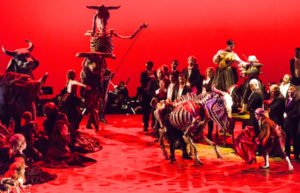 I recommend the cast and opera for both the veteran operagoer and person to new to opera, noting that in addition to hearing a well-sung and beautifully conducted performance, one is supporting a world class opera company during a time when audience support is especially needed and deserved.