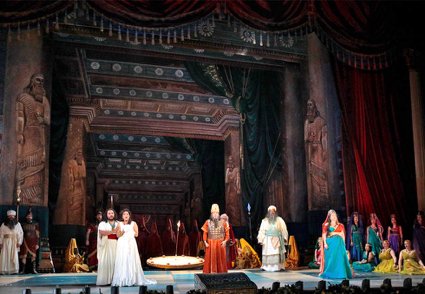 The Nabucco was sung by one of the most important dramatic tenors in operatic history, Plácido Domingo. In his later career, Domingo continues to make his mark on the operatic baritone repertory.

I found the 76-year old Domingo’s performance to be astonishing, his legato – which many artists find difficult to sustain in their late career – intact and seamless, his vocal expressiveness impressive in its lyricism, his ability to summon vocal power at dramatic moments uncompromised, his dramatic instincts unparalleled. Nabucco’s last act aria Dio, di guida was masterfully sung.

[Below: Plácido Domingo as Nabucco; edited image of a Ken Howard photograph, courtesy of the Los Angeles Opera.] 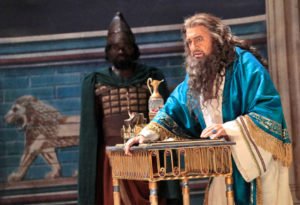 Over the past 12 years I have reported on Domingo’s vocal and dramatic achievements in operatic roles created by Handel, Wagner, Massenet, Alfano and Catan. The Los Angeles Opera audiences have been fortunate to hear Domingo sing the title roles of “Simon Boccanegra” and “Macbeth”, as well as Doge Francesco Foscari in “I Due Foscari” and Giorgio Germont in “La Traviata”. It likely will be the Verdi baritone roles for which Domingo’s baritone career will be remembered.

Any performance by the now legendary Plácido Domingo is memorable, but the evening was also the occasion for the triumphant Los Angeles Opera debut of Ukrainian soprano Liudmyla Monastyrska.

Assaying one of the most challenging roles in Italian opera, Monastyrska’s vocal performance was breathtaking, summoning dramatic power for Abigaille’s ferocious attacks on her father Nabucco and sister Fenena as well as on Ismaele, whom she would have had as lover and consort. She was one of the two artists (along with Morris Robinson, who sang the often cut second stanza of a cabaletta).

[Below: Abigaille (Liudmyla Monastyrska) siezes the Assyrian crown; edited image, based on a Ken Howard photograph, courtesy of the Los Angeles Opera.] 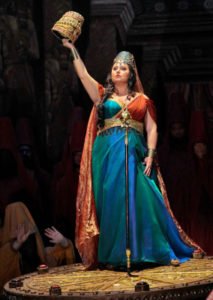 The most remarkable quality of Monastyska’s voice is its beautifully controlled, and vocally expressive bel canto. The role of Abigaille abounds in soft, sensuous, sweetly melodic passages, as in the aria Anch’io dischiuso un giorno and in these these passages Monastyrska demonstrated hers is a voice deserving international attention. The Los Angeles Opera audience recognized this with sustained ovations.

Atlanta basso Morris Robinson proved to be a master of the bel canto style, beautifully intoning Zaccaria’s prayers and his encouraging sentiments for the captive Israelites.

[Below: Morris Robinson as Zaccaria; edited image, based on a Ken Howard photograph, courtesy of the Los Angeles Opera.] 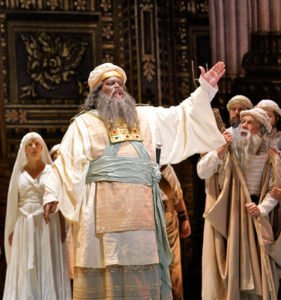 Robinson also summoned Old Testament fury in Come notte a sol fulgente, the angry cabaletta calling for the destruction of all enemies. Like Monastyrska, he sang both stanzas of his cabaletta. 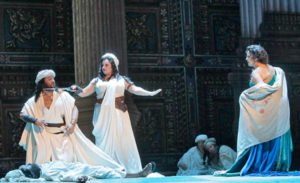 Spanish mezzo-soprano Nancy Fabiola Herrera, always a dependable artist, was a distinguished Fenena, whose affecting acting and beautiful timbre added luster to the trio with Monastyrska’s Abigaille and Chang’s Ismaele.

[Below: the principals assemble for the concertato “S’appresan”; edited image, based on a Ken Howard photograph, courtesy of the Los Angeles Opera.] 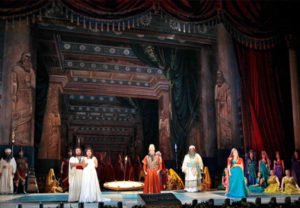 Minnesota soprano Liv Redpath was praiseworthy in the brief role of Anna, who makes an expository announcement.

Romanian bass-baritone Gabriel Vamvulescu sang the High Priest of Baal, who in this staging was physically disabled. Ohio tenor Joshua Wheeker was Abdallo. 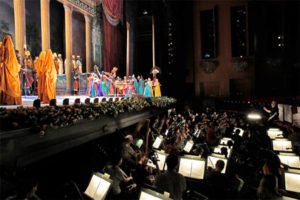 Having embarked on the mission of promoting any opera he conducts through pre-performance lectures, Conlon has become a Los Angeles institution. The popularity of his lectures continues to grow, assuring that a large part of any Conlon performance’s audience will arrive an hour before the scheduled curtain time.

“Nabucco” is one of the great choral operas, whose choruses, including the justly famous Va pensiero, were authoritatively sung by the Los Angeles Opera Chorus. The chorus is overseen by Grant Gershon, Chorus Director and a key member of company’s conducting staff.

I confess to a strong bias in favor of Thaddeus Strassberger’s elegant and inventive production, that I reviewed previously when mounted by the Washington National Opera at the Kennedy Center.

“Nabucco’s” Biblically-inspired story is presented “straight”, without attempting shifts in time or place. However, we the audience ourselves are transported to the year 1842 when the opera was first presented in Milan, then a duchy that was a possession of the Austro-Hungarian Empire.

[Below: the first scene of “Nabucco”, in Assyria, observed by members of the Austrian nobility (left); edited image, based on a Ken Howard photograph, courtesy of the Los Angeles Opera.] 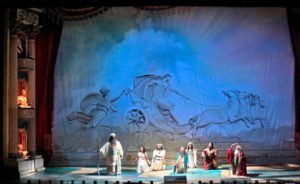 The stage is framed by portions of the La Scala opera house, including three levels of box seats adjoining the stage. As the opera’s opening sinfonia begins, members of the Austrian army, the soldier’s ladies, and Austrian nobility involve themselves in various military processions and dances before the Queen is seated.

[Below: Austrian nobility (in opera boxes at left) observe Abigaille (Liudmula Monastyrska, on stage, center, left) before the sets for the Assyrian palace; edited image, based on a Ken Howard photograph, courtesy of the Los Angeles Opera.] 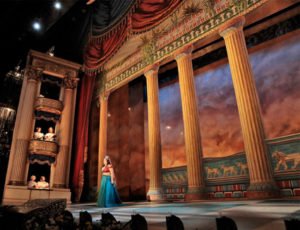 No detail is left untouched by Strassberger. Even the supertitles, translating the Italian text, are given a topical spin. Thus, when the chorus of Assyrian troops, in support of Abigaille’s coup d’etat against her father, reveal they are spreading false rumors that Nabucco has fallen in battle, the supertitles have them admitting to creating “fake news”.

[Below: Zaccaria (Morris Robinson, below, center right) sings in front of a large painting of an Old Testament scene; edited image, based on a Ken Howard photograph, courtesy of the Los Angeles Opera.] 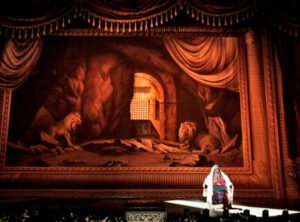 For the opera’s most famous scene, the chorus Va pensiero, the audience’s point of view shifts to the back of the stage, where the 1842 Milanese stagehands are lighting the candles in the back of a form that, when hoisted upward, will represent the full moon.

The production focuses on the activities of the 1842 stagehands as Verdi’s great chorus is performed lamenting the captivity of the Israelites by a foreign power. The 1842 Italian audience understood the metaphorical significance of that chorus to their political situation. Since 1842 the opera has indelibly been associated with the Italian Risorgimento that by the mid-19th century had successfully expelled foreign powers from Italy. 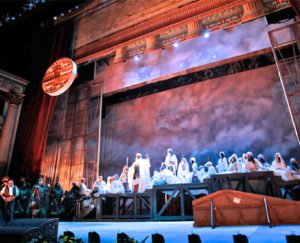 At opera’s end, there is a surprise for the audience. There is banter between the opera’s principals and the Austrian royals, then, slowly, some of the cast begins a defiant reprise of Va pensiero which the Milanese interpret as a calls to revolution against their Austrian “masters”.

Midway into the curtain calls, the Los Angeles Opera audience is invited to join the rebellion. The orchestra chimes in, conducted by Maestro Conlon, and supertitles provide the Italian words for anyone in the audience who wishes to sing. The entire audience (as it was in Washington DC) was swept into the spirit of the piece.

I recommend the opera, cast and production with great enthusiasm, both for the veteran operagoer and person new to opera, and suggest that, should one be able to secure tickets to a remaining performance, it is worth traveling a long distance to see it.