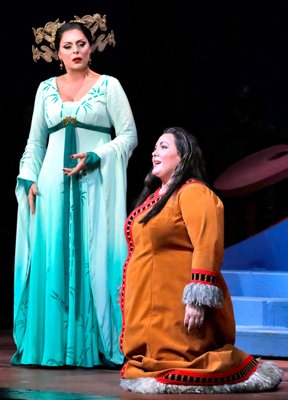 For its Fall 2017 season, San Francisco Opera has divided twelve performances of Puccini’s “Turandot” into two casts, the first performing six times during September and the second in late November and early December.

This season, I reviewed the first cast on the season’s opening night [Review: San Francisco Opera’s “Turandot” – Sonic Splendor, Visual Delight – September 8, 2017] and plan to review the second cast when the opera returns in November.

In the meantime I attended the Sunday matinee performance of September 24, providing me the opportunity to concentrate on some of the production’s details that I hadn’t addressed in my opening night review.

[Below: Princess Turandot (Martina Serafin, standing at top of stairs) reiterates her terms on which a suitor may court her; edited image, based on a Cory Weaver photograph, courtesy of the San Francisco Opera.] 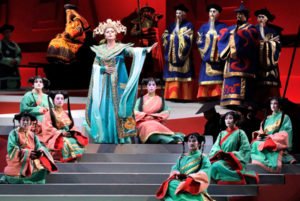 In my review of the opening performance, I praised the vocal and dramatic performances of Martina Serafin (Turandot), Brian Jagde (Calaf), Toni Marie Palmertree (Liu), Raymond Aceto (Timur), Joo Wan Kang (Ping), Julius Ahn (Pang) and Joel Sorensen (Pong). Each of the artists was equally effective vocally in this, their fifth performance.

Typical of later performances in a successful run after artists have shed any opening night nervousness, the entire cast showed confidence vocally and dramatically. Notably, four of the those seven principals (Jagde and the three ministers) are scheduled to return in November as part of the second cast, auguring well for the success of the November and December “Turandot” performances.

[Below: Brian Jagde as Prince Calaf; edited image, based on a Cory Weaver photograph, courtesy of the San Francisco Opera.] 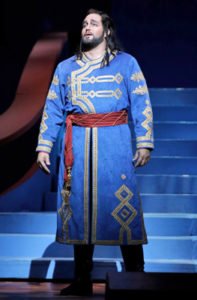 Most lustrous of all War Memorial performances were the 1977 season role debuts of Spanish soprano Montserrat Caballe (Turandot) and Italian tenor Luciano Pavarotti (Calaf) in the Jean-Pierre Ponnelle production from the Opera du Rhin Strasbourg. I was fortunate to see the first performance and a later one also. Four years later the power pairing of Hungarian soprano Eva Marton and Italian tenor Franco Bonisolli resulted in another memorable vocal performance.

[Below: the slave girl Liu (Toni Marie Palmertree, right) is the companion and guardian of the blind Timur (Raymond Aceto, left); edited image, based on a Cory Weaver photograph, courtesy of the San Francisco Opera.] 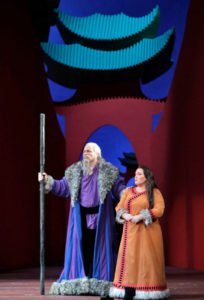 Yet, memories of previous great vocal performances in past decades in no way diminishes the impact of the world-class musical and dramatic performances of the current revival – the principal singers, the San Francisco Opera Orchestra under Maestro Nicola Luisotti, the San Francisco Opera Chorus, led by Ian Robertson, and the David Hockney production.

The paintings of English artist David Hockney are among the most esteemed of contemporary works of art. His operatic productions are massive masterpieces, each of them created with Hockney’s extraordinary attention to detail

[Below: the Empress Turandot (Martina Serafin, left) wonders at the self-sacrifice in the name of love that the slave-girl Liu (Toni Marie Palmertree, right) is willing to make; edited image, based on a Cory Weaver photograph, courtesy of the San Francisco Opera.] 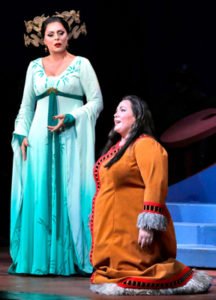 Hockney’s use of color, his lighting schemes, his coordination of the production’s style with the costume designs of Ian Falconer are extraordinary. Every element of set and costumes work beautifully and complement Puccini’s exotic musical palette.

“Turandot” is one of the great choral operas. The San Francisco Opera Chorus represented the people of China, dressed in black, with coordinated, choreographed hand movements accompanying their singing. The chorus acts as an emotional operatic character in itself, reacting to the activities of the principal characters with horror, fear or joy.

[Below: the people of China (San Francisco Opera chorus) react with excitement to the executioner’s preparations for his appointed tasks; edited image, based on a Cory Weaver photograph, courtesy of the San Francisco Opera.] 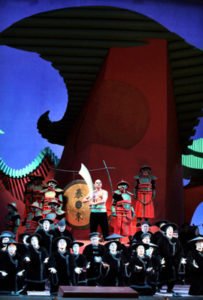 The production also features eye-catching acrobats and dancers who populate the festive ceremonial processions, and the large grindstone for the blades used by Turandot’s executioner on the many princes who fail Turandot’s tests.

In my previous reviews of the Hockney production, both in 2011 and earlier in September 2017, I recommended the cast and production both for the veteran opera-goer and the person new to opera.

I reiterate that recommendation, but suggest that the David Hockney “Turandot” experience is transcendent – a total work of art comprising multiple elements – art, painting and lighting. supporting extraordinary solo voices integrated with highly dramatic orchestral and choral music and an absorbing theatrical story.

For those able to attend one of the six San Francisco Opera performances in November and December, I recommend that that they do so.