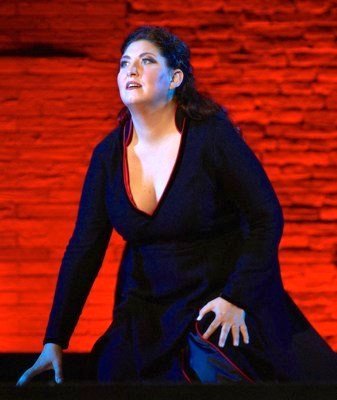 The following interview was conducted with the much-appreciated facilitation of the San Francisco Opera. 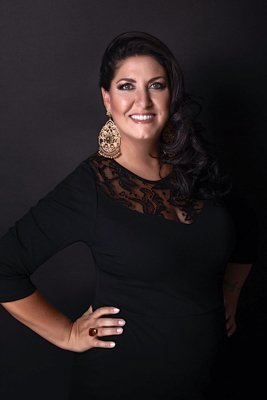 Wm: I ask each of my interviewees the following questions: What are your earliest memories of music? of opera?

AP: As a young girl I did not listen to opera or classical music, but my father used to play in a rock band and my mother loved to sing Neapolitan songs. I myself enjoyed karaoke and sang pop and at one point I felt the need to be able to read music.

Wm: Your biography states that you sang pop songs until age 25. Did you actually perform pop music professionally? What motivated you to move from pop to opera?

AP: Yes, I sang pop music professionally singing in clubs, and I even won several pop music competitions. It was my desire to be able to read music that led me to the Conservatory.

William: You are from Napoli, but your early academic music training took place at Istituto Musicale Pareggiato in Aosta in Northeast Italy, near the French and Swiss borders. How did you choose that institution for vocal training?

AP: My family is from Naples and I was born there, but when I was 13 we moved to Aosta for work purposes. I grew up in Aosta.

Everyone suggested that I should go and enroll at the Conservatory, even though I was skeptical, because at that point I had no intention to sing opera. Neither did I want an operatically trained voice. But eventually I gave in and enrolled at the Conservatorio of Aosta.

[Below: Anna Pirozzi as Nedda in the 2015 Macerata (Italy) Festival production of Leoncavallo’s “I Pagliacci”; edited image, based on a Alfredo Tabocchini photograph, courtesy of Anna Pirozzi.] 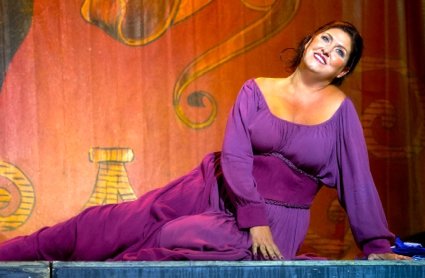 Wm: What did you learn there?

AP: There I found a teacher, Marco Ricagno, who immediately told me that my voice was naturally predisposed towards a classical training. He told me to listen to the most important singers of the past century, and particularly Maria Callas, and it was love at first hearing.

I learned about the existence of a proper vocal technique and I started to appreciate this most beautiful art form, opera. Subsequently, I completed my musical and vocal studies at the Conservatory of Turin.

[Below: Anna Pirozzi as Aida in the 2015 production of Verdi’s “Aida” at the Teatro Regio Torino; edited image, based on a Edoardo Piva photograph, courtesy of Anna Pirozzi.] 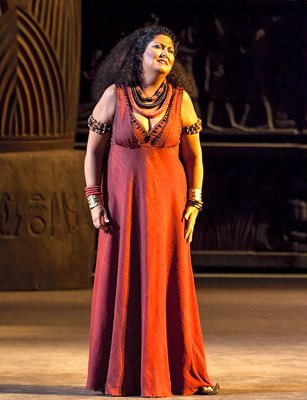 Wm: In the past few years you have performed the role of Abigaille in Verdi’s “Nabucco” in Ljubjana, Cagliaro, Parma, Palermo, Salzburg, Bologna, Sanxay, Leipzig, Tel Aviv, Valencia, Verona, Piacenza, Las Palmas, Beijing, Florence and Mao and are scheduled to sing it in Monte Carlo and Milano. Your performances are under such conductors as Riccardo Muti, Nicola Luisotti and Nello Santi.

The role has a reputation for being very difficult, yet you obviously have achieved mastery over it. What does the role mean to you? Do you consider it your signature role? Do you expect to retain it indefinitely in your repertory?

AP: Abigaille has been playing a crucial role in my career. I have sung it very often, and it was at the core of my repertoire even when I was singing in smaller opera house, before I was able to get hired by the very important opera companies.

So, when Maestro Riccardo Muti called me to Salzburg, I knew it like the back of my hand. It opened so many doors for me. It allowed my name to spread in the operatic world.

It is true that it has this reputation as a tremendously difficult role, but, I don’t know why. I have never found it so unapproachable. I sing it with my own voice, with naturalness and without forcing, and I believe it suits my vocal characteristics, and after so many performances I feel it “in my throat” as Italians say.

It is a role to which I owe so much, even though I can’t say it is my favorite role. Leonora in Verdi’s “Il Trovatore” is at the top of my list. In any case I intend to keep Abigaille in my repertoire for a few more years, though singing fewer and fewer performances.

[[Below: Soprano Anna Pirozzi as Leonora in the 2016 Macerata Opera Festival production of Verdi’s “Il Trovatore”; edited image, based on an Alfredo Tabocchini photograph, courtesy of Anna Pirozzi.] 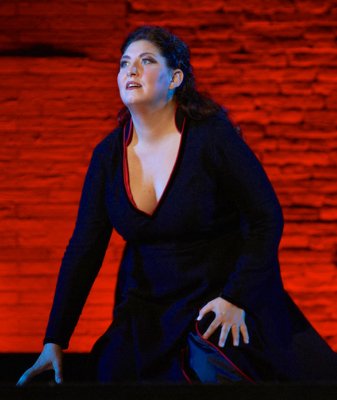 Wm: In addition to Abigaille, you sing other early Verdi roles – Elvira in “Ernani”, Lady Macbeth in “Macbeth” and Lucrezia in “I due Foscari”, and such a dramatic Donizetti role as Elisabetta in “Roberto Devereux”. How do you approach these roles?

[Below: Anna Pirozzi as Elisabetta I in the 2015 Bilbao Opera (ABAO) production of Donizetti’s “Roberto Devereux”; edited image, based on a Julian photograph, courtesy of Anna Pirozzi.] 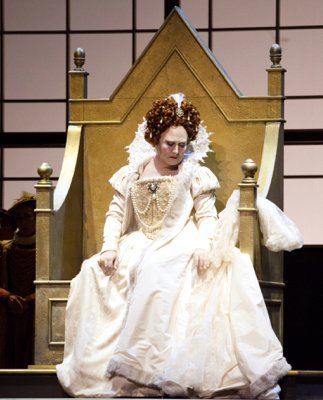 AP: I feel Verdi “in my vocal cords” – I mean I feel at ease with his music, both early and late Verdi. His first operas have very different hurdles than his later ones, but I face both with my own technique, keeping a floating and forward vocal position and without darkening it artificially.

The early Verdi roles abound with lyric expansions, soaring phrases and so it is necessary to master a flawless legato, but they are also rich with florid passages, which call for very precise coloratura skills.

When I was first offered the role of Elisabetta, I had a few doubts, I don’t know why, but as soon as I started to study the score I realized that after all it is not so different from all the early Verdi warrior women, or simply extremely courageous women.

[Below: Anna Pirozzi as Lucrezia Contarini in the 2016 Teatro alla Scala production of Verdi’s “I Due Foscari”; edited image of a Brescia e Amisano photograph, courtesy of Anna Pirozzi.] 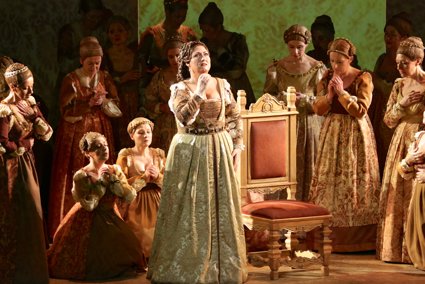 Wm: You have been singing some of the big verismo roles – Santuzza in Mascagni’s “Cavalleria Rusticana”, Puccini’s “Tosca” and Maddalena in Giordano’s “Andrea Chénier”.

These roles have their own challenges, especially with the heavy orchestration associated with many verismo operas. You have role debuts scheduled in such works as Cilea’s “Adriana Lecouvreur” and Catalani’s “La Wally” and you will be adding the bel canto work, Bellini’s “Norma”, as well.

Your commitment to the bel canto, Verdi and verismo roles is remarkable. What steps do you take to assure that you stay vocally healthy as you move between roles written in quite different styles?

AP: Verismo roles have usually very central tessituras, such as, for example, Maddalena di Coigny. I try to rest in between roles, particularly if I am about to perform a role with completely different challenges than the one I have just finished to sing.

I try to keep silent and speak only when it’s strictly necessary, when I am not practicing of course. I often say this in my interviews, but as my current voice teacher, baritone Federico Longhi, says, the human voice is not a lift and needs its time to adjust to all kinds of demands.

[Below: Anna Pirozzi as Tosca in the 2014 production of Puccini’s “Tosca” at the Astana (Kazakhstan) Opera; edited image, based on a Karla Nur photograph, courtesy of Anna Pirozzi.] 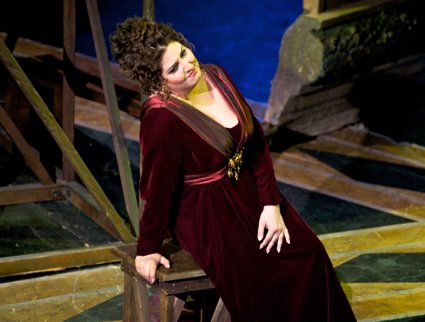 Prior to this year’s opening night of “Andrea Chénier” there have been only 23 previous performances in history of in the War Memorial Opera House. Even so, in those 23 performances, the role of Maddalena di Coigny has been sung in these performances by some of the greatest soprano voices of the 20th century, including Elizabeth Rethberg, Licia Albanese, Renata Tebaldi and Aprile Millo.

What were your thoughts about your San Francisco Opera debut and American debut as Maddalena at the War Memorial?

AP: It was an indescribable experience, because it after all it was my American debut, and what’s more in such an important company as the San Francisco Opera. I learned right away that “Andrea Chénier” has not been often performed here, but when it was, it was always with legendary names, and I felt a huge responsibility. 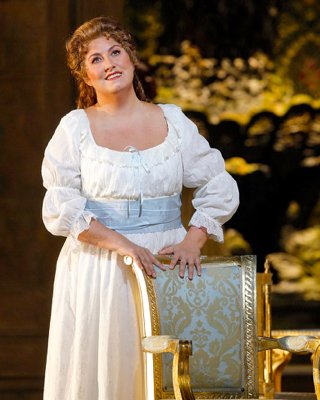 I am truly honored to sing it on the same stage as Renata Tebaldi and Aprile Millo, two artists I simply adore. Fortunately it was not a role debut and so I felt calm and relaxed. Maddalena does not present unsurmountable challenges from a mere vocal point of view, which allows me to focus on what are the real hurdles of the role, its emotional demands, the fraseggio. I can concentrate on conveying all my emotions to the audience.

I have nothing but praise for San Francisco Opera and the War Memorial Opera House. It is an extremely welcoming environment where they go out of their way to make sure that the artist feels relaxed and able to think only about the music, without having to deal with external tensions.

Here I have seen a backstage photograph of an Andrea Chénier with Gigli, Rethberg and Merola, and I was overwhelmed by emotion.

Wm: Thank you so much for an informative interview.