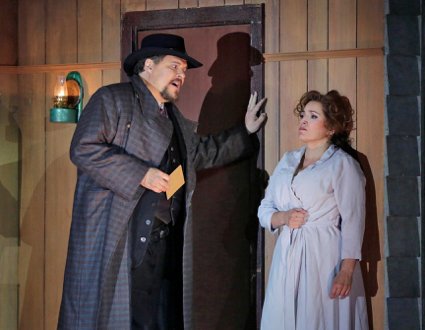 The following conversation took place with the facilitation of the Santa Fe Opera, in conjunction with Mark Delavan’s appearances as Sheriff Jack Rance in Puccini’s “Girl of the Golden West [La Fanciulla del West]”.

[Below: Mark Delavan as Jack Rance in Richard Jones’ 2016 Santa Fe Opera production of Puccini’s “Girl of the Golden West”.] 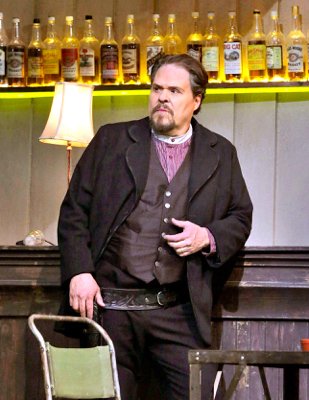 Wm: You play the part of Sheriff Jack Rance in Puccini’s “Girl of the Golden West” at Santa Fe Opera to Patricia Racette’s Minnie. You now have experienced this role in different productions in the U. S. and Europe.

MD: That’s correct. My first time was a Covent Garden in 2005. That was that amazing production from the 1980s directed by Piero Faggioni.

[Below: Mark Delavan is Jack Rance, with Jose Cura as Dick Johnson in the 2005 Piero Faggioni production of Puccini’s “Girl of the Golden West”; edited image, based on a publicity photograph for the Royal Opera House. 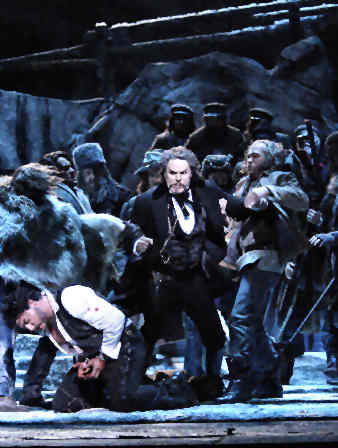 Wm: Would you comment on the proposition that the opera is one of the great scores of the verismo era, and that, in productions like the co-production of the Santa Fe Opera and the English National Opera, it could become an opera audience favorite.

MD: Honestly, I think it already is an audience favorite. In terms of one of the great verismo operas, I think it speaks for itself. The music is exquisite, the score is phenomenal, and the vocal line is beyond comparison. In fact, many parts of the opera hint back to Bel canto.

In my opinion, the top complaint in the books has to be that it’s not done as often as other audience favorites. The problem here is that it’s very difficult to produce. It’s very expensive, and you have to have a lot of really good singers.

Most people only think of the principal three, but you have to have a very good Ashby, Sonora and a very good Nick. In addition,  you have to put your young artists to work singing Trin, Happy, Bello and all those guys.

Wm: It’s pretty obvious that Santa Fe Opera went out of its way to produce just such a “Fanciulla” cast. There also was obvious chemistry between the artists performing.

MD: That’s an excellent comment, Bill. For years, I’ve been hoping someone would ask me about casting “Fanciulla”. First of all, I think an opera company makes a mistake if they if they don’t cast lead singers in roles of Sonora, Nick, and Ashby.

When Santa Fe asks Craig Verm to do Sonora, that is luxury casting to be sure, as he is a leading man in his own right. But Alan Glassman as Nick, (whom I’ve done dozens of shows with both at the Met and New York City Opera, including Verdi’s “Otello”, and have known for 22 years) , and Raymond Aceto as Ashby (whom I’ve also performed many operas with including Verdi’s “Nabucco” and “Rigoletto” and have known for 24 years) is outrageous casting.

Wm: In addition, this is one of the rare occasions to hear Welsh tenor Gwyn Hughes Jones perform in the American Southwest.

MD: I met Gwyn Hughes-Jones back in 2004 when we were both performing in the Met’s “Nabucco”. We didn’t really get a chance to know each other then, but we have certainly made up for lost time. Despite being an amazing singer with a classic Celtic sound, he’s also an amazing man.

I am privileged and honored to call these men my friends. Knowing what you know about those particular individuals, try to imagine what the dressing room is like. (Here in Santa Fe, we share a communal dressing room). The men’s dressing room is more like a locker room than a dressing room. The laughter can be heard all the way to the town of Espanola.

[Below: Minnie, the Girl of the Golden West (Patricia Racette, left) becomes enamored of the outlaw who calls himself Dick Johnson (Gwyn Hughes Jones, right); edited image, based on a Ken Howard photograph, courtesy of the Santa Fe Opera.] 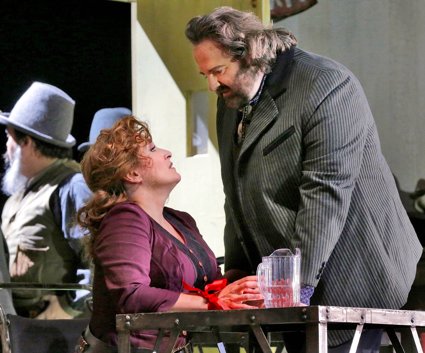 Then there’s Patricia Racette… Vocally, she’s amazing. Dramatically, she is enthralling. But that’s nothing compared to the woman.

When I met her, I really didn’t want to like her. You see, she was direct competition with my sister, who was also performing the title role of Madame Butterfly.

The first time we performed together was 1991. She was performing Micaela, and I was performing the comprimario role of Morales in the San Francisco Opera production of Bizet’s “Carmen”.

She was funny, self-effacing, lighthearted, and genuinely a perfect colleague. As I’ve  gotten older, and she and I have performed different operas together, and passed in the hallways of 100 opera companies, we  pick up where we left off, and it is a joy to call her a friend.

[Below: Jack Rance (Mark Delavan, left) tries to give Minnie (Patricia Racette, right) some unsolicited advice; edited image, based on a Ken Howard photograph, courtesy of the Santa Fe Opera.] 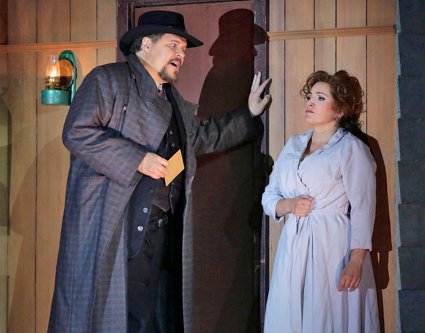 I say all that, to say this: Ensemble in an opera like “La Fanciulla del  West” is vital. If possible, it should be a cast that, at least, get along and sound good together. In this cast, we are blessed to say we like each other, respect each other, and really enjoy hanging out together. In addition to that, with modesty and humility, I think we sound great together.

Wm: Last summer you took on a major role in a new opera. “Two Women”, by Marco Tutino, which the San Francisco Opera administration asked reflect the melodramatic style and melodic content we associate with turn of the 20th century verismo operas. Despite some hostility from portions of the printed press to such an idea, the opera seemed to be  well-received from the audiences attending it.

You played the part of Giovanni, who was both a collaborator with the Nazis and a rapist. What are your thoughts on the opera and whether it should be revived?

MD: Yes, I believe we were 100% for spontaneous standing ovations. On a personal note, the bad guys – the Morrocans, Christian Van Horn, and myself – received an ocean of “boos” at 100% of the performances.

I’ll tell you little story. One of my sons was very excited about an upcoming movie – a summer blockbuster, of sorts. Opening day came and he began looking at the reviews. He was very disappointed to discover that the critics hated the movie in question.

On the Internet  Movie Data Base, the audience reviews were exactly the opposite. No we haven’t seen the movie yet, and I’ll tell you if we enjoyed it or not. But the point is, the critics have a particular point of view. No problem, we need them as much as we need everybody else. They keep us all in check.

As far as “Two Women” is concerned, despite the critics’ opinion, I absolutely believe it should be in the repertoire because it has so much to say. It’s a very timely piece, and it was a very romanticized time in American history. This is one of those dark stories that has to come out. 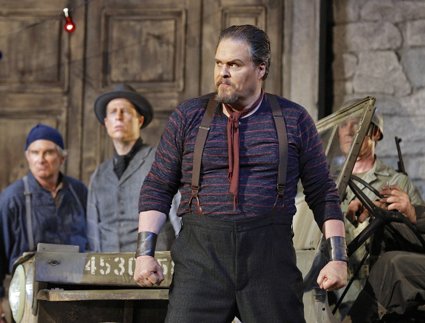 I remember Maestro Luisotti explaining how all of this came about. By the end of the Second World War, walking blindly into the Cold War, we thought that life was over, and we were probably all going to die anyway, and everything was dark. So all the modern operas were very dark, depressed, and angular.

Luisotti further explained that this opera was an experiment; a “what if” if you will. What if the Second World War and the Cold War didn’t happen? What if we went from Puccini directly into the 21st century?

MD: Yes, I remember it well. We discussed quite a few of them as I recall.

Wm: You had made the point that over a career of a baritone’s career the range in which his voice sounds best may change, and that you were then concentrating on roles that lay lower in the baritone range. What roles do you believe best fit your voice at this point in your career, and why?

MD: Frankly, there have been very few deletions; mostly additions.

Everyone’s personality contains light and dark. So for me as a performer I try to explore both in the characters that I perform. For instance, I find Wotan in Wagner’s “Ring of the Nibelungs” fascinating. One could argue that he is more dark than light. I am not here to make that argument. 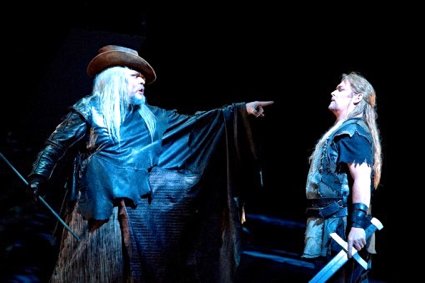 On the dark side, I don’t ever see myself NOT performing Scarpia in Puccini’s “Tosca”. Likewise, I absolutely love singing Iago in Verdi’s “Otello”. The Four Villains in Offenbach’s “The Tales of Hoffmann” are a joy to sing and act. I sang the Villains a couple of years ago in Palm Beach. They were a big success.

But there are an awful lot of characters in between the light and the dark –quirky characters like Jack Rance, Jupiter in Strauss’ “Die Liebe der Danae” which I revived this season, Verdi’s “Falstaff”, Wagner’s “The Flying Dutchman”, and Puccini’s “Gianni Schicchi”.

For me, it’s about the character; I have to be able to relate to the character.  I either have to admire him or revile him. And if I revile them, I have to find some sense of respect.

Wm: I appreciate the opportunity to talk with you about this exciting Santa Fe Opera production.