I attended the second performance of the current revival of Luc Bondy’s production of Puccini’s “Tosca” at the Bayerische Staatsoper, which was a vehicle for Illinois soprano Sondra Radvanovsky.

The title role of “Tosca” is one of Sondra Radvanovsky’s signature roles. It is a role to which her dramatic instincts and her large and expressive voice, with its gleaming top and secure lower register, are suited perfectly.

From her first entrance in the church (sets designed by Richard Peduzzi), she is the center of attention, projecting a woman, confident in her own artistry, but deeply insecure in her relationship with her lover, Mario.

Radvanovsky has mastered the ability to project affection, jealousy, rage and fear using both her voice and her attentive acting. Puccini’s melodramatic opera provides her with the opportunity to make use of all these skills.

[Below: Sondra Radvanovsky in the Milena Canonero costume for Tosca in Act II of the Luc Bondy production; edited image of a Morty Sohl photograph for the New York Metropolitan Opera.] 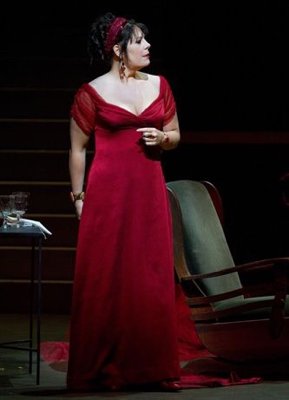 Radvanovsky is a proven star in the Luc Bondy production, in which she has appeared at both the New York Metropolitan Opera and Milan’s La Scala (the Staatsoper’s two partners in the three company co-production).

This is the first time I’ve seen Radvanovsky in the Bondy production, although I have reviewed her performance in the production by John Caird [Sondra Radvanovsky is a Radiant, Transcendent Tosca – Los Angeles Opera, May 18, 2013], which, like Bondy’s, is deemed to be from outside the “traditional” approaches to presenting “Tosca”.

Radvanovsky, whom I’ve reviewed in 13 performance of ten roles (all highly dramatic soprano roles by Bellini, Donizetti, Verdi and Puccini) over the past eight years, has never disappointed.

In act one, Canary Islands’ tenor Jorge de León sang the role of Cavaradossi with an initial tentativeness. However, de León’s spinto voice and ardent acting had me convinced by the time of Cavaradossi’s treasonous pro-Napoleonic Vittorio! Vittorio! outburst in the second act.

De  León delivered a fine E lucevan le stelle, engendering a foot-stomping ovation from the sold-out Munich audience. The foot-stomping continued at opera’s end, when he and his co-star Radvanovsky were warmly applauded.

[Below: Floria Tosca (Sondra Radvanovsky, left) critiques the subject matter of the painting the Mario Cavaradossi (Jorge de León, right) has been commissioned to create; edited image, based on a W. Hösl photograph, courtesy of the Bayerische Staatsoper.]

It’s been almost a decade since I last reviewed an Ambrogio Maestri performance [see Hayseed Hilarity: The Pelly “L’Elisir” in Paris – September 16, 2007]. I found his Scarpia to be the one problematic member of the current cast.

Played as a slovenly decadent, I believed that Maestri’s character lacked the minimal baronial dignity that even this roué would need to survive in the highly politicized counter-revolutionary society, nor was I particularly impressed by Maestri’s vocal performance.

[Below: The Baron Scarpia (Ambrogio Maestri, in blue coat, left center) belatedly joins in the religious procession; edited image, based on a W. Hösl photograph, courtesy of the Bayerische Staatsoper.] 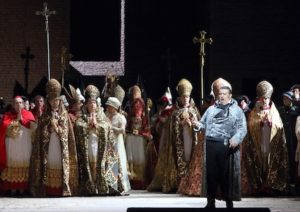 Conners, in the tradition of great character tenors, was a fascinating Spoletta, fearful of the abusive Scarpia, while obviously as sexually attracted to Tosca as was his boss. Conners’ characterization of the neurotic Spoletta was masterful.

[Below: Scarpia (Ambrogio Maestri, in blue coat) attempts to subdue Tosca (Sondra Radvanovsky, in red dress); edited image, based on a W. Hösl photograph, courtesy of the Bayerische Staatsoper.] 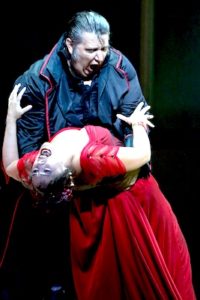 Other noteworthy performances were the well-sung Sacristan of German bass-baritone Christoph Stephinger, the Angelotti of Croatian basso Goran Juric and the young shepherd of Ukrainian boy soprano Igor Tsarkov.

The opera was conducted by Daniele Callegari.

It’s been seven years since this production debuted at the New York Metropolitan opera house to a swirl of controversy, surrounding what were identified as “non-traditional” features. Yet, observing the production at its Munich home, I had no sense of this being an edgy production.

Details differ, of course, from other “Tosca” productions. Scarpia’s lust was personified (almost comically) by his embracing in the church a processional statue of the Virgin Mary, and by three bawdy prostitutes attending to his needs in the second act’s opening scene.

[Below: a firing squad has assembled to dispatch Mario Cavaradossi (here, Jonas Kaufmann, in the  corner of the structure at right); edited image, based on a 2010 production photograph for the Bayerische Staatsoper.] 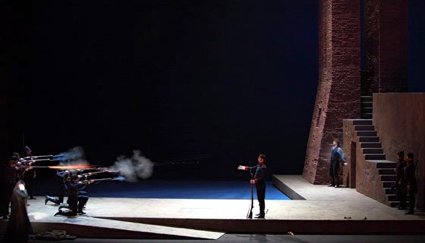 Richard Peduzzi’s sets emphasize vertical heights (allowing in the church scene the opportunity for Goran Juric, as the escaping Angelotti, to rappel down from an upper story window to the church floor).

The first and third acts are darker (in the sense that there is less light) than in other productions I’ve reviewed. However, nothing in the production does any violence to Puccini’s story line. The costumes, by Milena Canonero, were consistent with a traditional production as well..

[Below: the late Swiss Director Luc Bondy (1948-2015); edited image of a publicity photograph from wikipedia.com.] 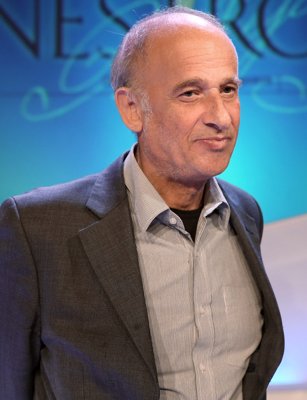 Bondy’s production appears to me to be as much in the tradition of “Tosca” as the “traditional” productions that eight years ago Bondy’s ideas were thought to be in dissonance with.

I recommend this revival of “Tosca” for the impressive performance of Sondra Radvanovsky in the title role, and for a supporting cast that was, on balance, of high caliber.