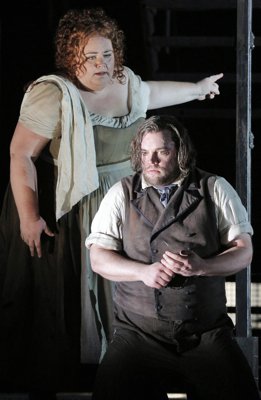 Based on these criteria, I found that the musical performance of each of the productions exceeded my definition of a “routine performance”, as did the physical production of all but one of the operas mounted.

Scottish Director Sir David McVicar ranks at the highest level of contemporary opera producers. Two of his productions were imported to San Francisco in 2015, including the largest sets, those designed by Es Devlin for McVicar’s production of Berlioz’ “The Trojans”, ever to be mounted on the War Memorial Opera House stage. A co-production with Royal Opera House, Covent Garden and La Scala, the San Francisco performances represent its only scheduled appearances in the Western Hemisphere.

[Below: A scene in Carthage in Sir David McVicar’s production of “Les Troyens”; edited image, based on a Cory Weaver photograph, courtesy of the San Francisco Opera.] 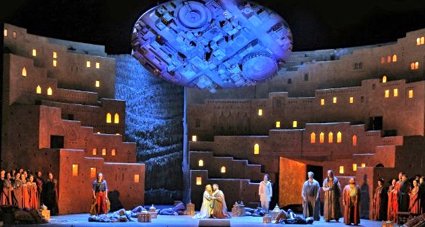 Characters of the older generation were sung by Catherine Cook (Marcellina) and Greg Fedderly (Don Basilio). The Doctor Bartolo was John Del Carlo, having debuted in the 1970s, is now the most senior principal artist on the San Francisco Opera roster. 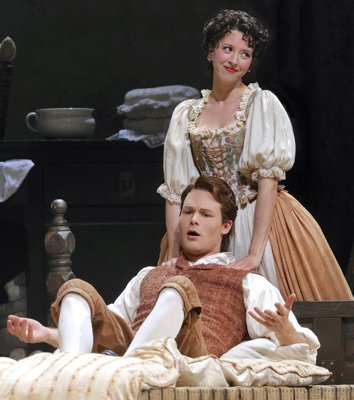 The most fascinating San Francisco Opera repertory choice of 2015 was its decision to commission an opera based on Alberto Moravia’s Italian novel La Ciociara about the determination of a mother and daughter to survive World War II, while trapped in a Nazi-controlled rural Italian town.

Not only was it to be the world premiere of a new Italian-language opera in San Francisco, but the Italian composer, Marco Tutino, was encouraged by San Francisco Opera’s Italian music director Nicola Luisotti to create a work freely utilizing popular operatic styles and idioms of pre-World War I Italy, the time when the mix of Wagner-influenced orchestration and Italian melodrama known as verismo flourished.

The result was a spectacular success, loved by the audience, even though major critics were perplexed by the company’s boat-rocking audacity in encouraging a composer to employ a musical palette that audiences actually liked. (“Audience appeal” is not my characterization of the opera company’s strategy. General Director Gockley, Music Director Luisotti and Composer Tutino held a press conference for critics in which they stated that audience appeal was their intent.)

[Below: Cesira (Anna Caterina Antonacci, center right) holds threatens a group of Moroccan soldiers with a knife to protect herself and her daughter Rosetta (Sarah Shafer, center left); edited image, based on a Cory Weaver photograph, courtesy of the San Francisco Opera.] 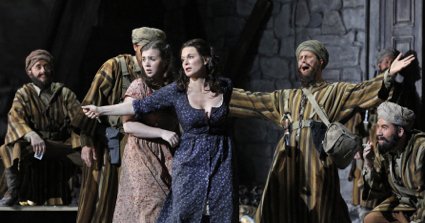 That a new Italian opera could incorporate early 20th century Italian operatic ideas to portray the dramatic situations that the Two Women faced when encountering Nazis, rapists and other bad guys, infuriated some critics.

One critic ended a diatribe against the opera’s “lush, rhapsodic orchestral textures and conventional tonal harmonies” with the question “Why not revive ‘Tosca’  . . . and be done with it?” [Reply: “Tosca” takes place 145 years earlier and has a different plot.]

An out-of-town critic expressed annoyance at the San Francisco audience’s ovation, that she described as “whooping and hollering” (and might have been further annoyed that the San Francisco Opera chose that phrase – that she meant to be pejorative – to promote the later performances).

The cast was led by Anna Caterina Antonacci as Cesira and Susan Shafer as her daughter Rosetta; Mark Delavan as the collaborator Giovanni; Christian Van Horn as a Nazi operative; and Dmitri Pittas, representing decency and humanity, as the teacher Michele.

The San Francisco company paired baritone Brian Mulligan and mezzo-soprano Stephanie Blythe, both in role debuts, in the mad duo of Sweeney and Mrs Lovett. Mulligan and Blythe were an astonishing pair, who made a strong case for why this Sondheim musical belongs in the opera house.

[Below: Sweeney Todd (Brian Mulligan, left) gets some unexpected advice from Mrs Lovett (Stephanie Blythe, right); edited image, based on a Cory Weaver photograph, courtesy of the San Francisco Opera.] 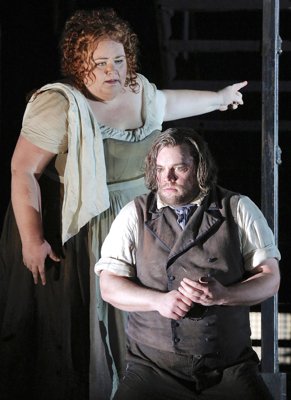 A new production was conceived by director Michael Cavanagh, in collaboration with Erhard Rom, whose breathtaking set designs and video projections seem to be the future of opera production.

Circumstances resulted in 27-year old lyric coloratura Nadine Sierra unexpectedly taking on the role of Lucia, but it proved a salutary assignment. Sierra’s vocal virtuosity met the musical demands of the great bel canto role, while her youth and acting ability assured that the underlying dramatic force of Donizetti’s opera would be realized by a performer much closer in age to that of her character’s.

[Below: The dead body of her slain husband behind her, Lucia di Lammermoor (Nadine Sierra) proves to be a reluctant bride; edited image, based on a Cory Weaver photograph, courtesy of the San Francisco Opera.] 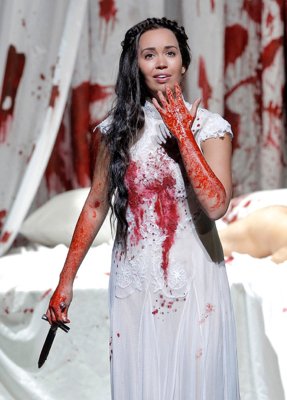 She was an effective exemplar of Cavanagh’s conceptualization that the decades old feud between the Lammermoors and Ravenswoods had created an atmosphere of evil and madness. Piotr Beczala was Sierra’s Edgardo, Brian Mulligan her brother, Enrico. Maestro Nicola Luisotti lovingly caressed Donizetti’s music.

I had graded the Jun Kaneko production of Mozart’s “Magic Flute” as an A+ when it debuted at San Francisco Opera in 2012. Each of the cast changes for its 2015 revival – including Paul Appleby, the new Tamino, Sarah Shafer the new Pamina and Efrain Solis, the Papageno matched in effectiveness the original cast.

(The Queen of the Night, Albina Shaguritimova, was ill on the night I reviewed, but Kathryn Bowden, who replaced her, did a fine job as well.)

[Below: Tamino (Paul Appleby) is threatened by a two-headed monster; edited image, based on a photograph for the San Francisco Opera.] 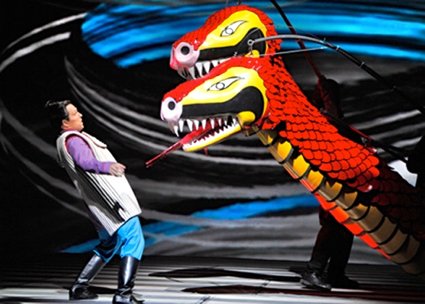 Lawrence Foster, a San Francisco Opera debut, conducted. The lively projections and bright-colored costumes were as charming as before.

The second of Sir David McVicar’s monumental productions to be seen in San Francisco this year, was his famous production of Wagner’s “Die Meistersinger”, completing a run of nine of the ten regularly performed Wagnerian operas in the decade of David Gockley’s leadership of the opera company.

A vehicle for a Gockley (and San Francisco) favorite, tenor Brandon Jovanovich, it also starred Rachel Willis-Sørensen as Eva and James Rutherford as Hans Sachs. Alek Shrader and Sasha Cooke were charming as the young lovers David and Magdalena.

[Below: Walther (Brandon Jovanovich, left) has won the song contest and claims his prize, Eva (Rachel Willis-Sørensen, right); edited image, based on a Cory Weaver photograph, courtesy of the San Francisco Opera.] 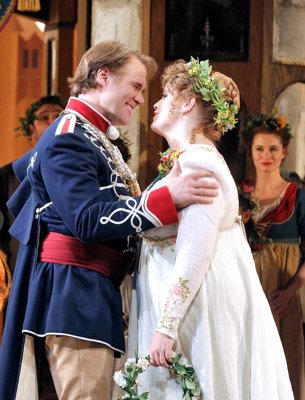 Like “The Magic Flute”, a revival of a recent new San Francisco Opera production, Emilio Sagi’s “Barber” returned with several veterans from the 2013 season. These included the Figaro, Luis Meachem; the Rosina Daniela Mack; the Bartolo, Alessandro Corbelli; the Basilio, Andrea Silvestrelli, and the Berta, Catherine Cook.

[Below: the Count Almaviva (Rene Barbera, right, disguised as a music teacher) uses a lesson as a guise to be near Rosina (Daniela Mack, left); edited image, based on a Cory Weaver photograph, courtesy of the San Francisco Opera.] 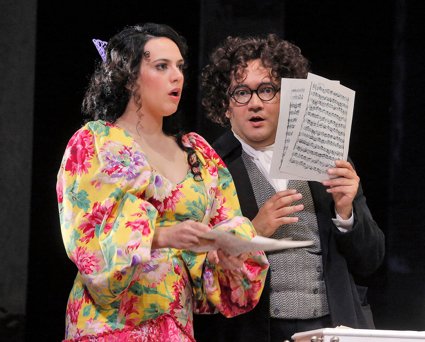 New to the cast was Rossini specialist Rene Barbera, who, like the two tenors who proceeded him in this production, sang Almaviva’s complete role including the difficult final scene aria Cessa di piu resistere, even though no other tenor had attempted it in a San Francisco Opera performance before 2013.

Composer Gordon Getty’s new one act opera premiered at the Welsh National Opera in 2014. Based on Edgar Allan Poe’s short story The Fall of the House of Usher, it was given an extraordinary production, conceived by David Pountney, and utilizing the amazing video projections of Austrian videographer David Hanake.

[Below: Roderick Usher (Brian Mulligan, right) relates the horror that he feels living in Usher House to his friend, Edgar Allan Poe (Jason Bridges); edited image, based on a Cory Weaver photograph, courtesy of the San Francisco Opera.] 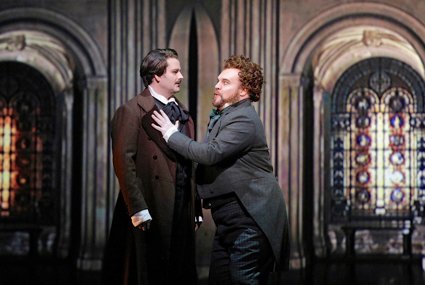 Jason Bridges performed with distinction as Roderick’s friend, Edgar Allan Poe. Particularly vivid impressions were made by the deliciously creepy Doctor Primus of Anthony Reed and the Madeline (sung by Jacqueline Piccolino and simultaneously danced by Jamielyn Duggan).

Maestro Lawrence Foster, who had been at the helm for its world premiere in Cardiff, conducted.

Claude Debussy shared an interest in the occult and in Edgar Allan Poe’s writings with a number of influential French artists and intelligentsia of the late 19th and early 20th century. For two decades he worked on writing a libretto and music to an opera on Fall of the House of Usher

[Below: Tormented by the Maison Usher, the house he believes has driven him made, and by the vision of his sister Madeline (Jacqueline Piccolino, center), Roderick Usher (Brian Mulligan, center front), cowers in fright; edited image, based on a Cory Weaver photograph, courtesy of the San Francisco Opera.] 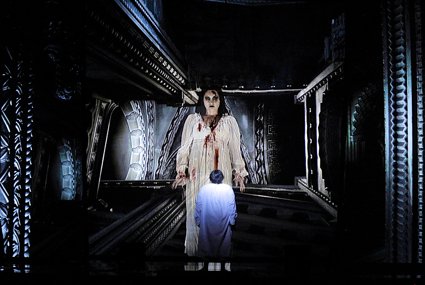 Brian Mulligan (who had only finished singing Gordon Getty’s manic version of Roderick Usher in Usher’s “Getty House” in English a half-hour earlier), took on Debussy’s chromatic music in French as the thoroughly mad Roderick Usher conceived by the great Parisian composer.

David Haneke’s projections for “Maison Usher” gave us a sense of the terror in Roderick Usher’s mind that the house was alive and intent on doing him in.

Mulligan was joined by Edward Nelson’s L’Ami and the Madeline of Jacqueline Piccolino, with yet another brilliant character role for Joel Sorensen, the mysterious Le Médecin. Maestro Lawrence Foster conducted.

In many ways, “Luisa Miller” was one of the most exhilarating offerings of the season. It boasted a spectacular performance of the lead tenor role Rodolfo by Michael Fabiano (exactly what is needed for this opera that assumes that one has a spectacular lead tenor on hand to sing it). He was joined with distinction by Leah Crocetto as Luisa, Andrea Silvestrelli as Wurm, Daniel Sumegi as Walter and Vitalij Bilyy as Miller.

The stylized Michael Yeargan turn-of-the-millenium sets for Verdi’s “Luisa Miller”, however, paled alongside all the season’s other productions. 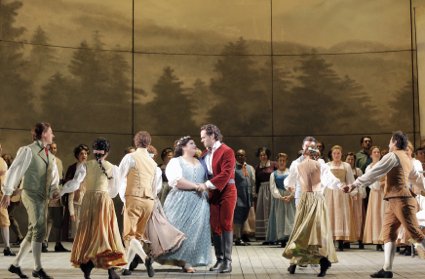 The sets reflected Yeargan’s penchant for creating fast-moving scene changes, even if it precluded investing in visual grandeur for Walter’s court or bucolic charm for the villagers’ scenes. Changes in the technology of staging operas, especially the use of video projections, suggest that the compromises one encounters in many Yeargan-era productions are no longer necessary.

The production’s revival after a 15-year absence did, however, provide an opportunity for the original director, Francesca Zambello, to return (and, in recognition for her decades of service to the company, receive the San Francisco Opera medal).

For those who wish to respond to these ratings, contact William at [email protected]