After an intermission which clearly was too short for Maestro Domingo (who had just completed singing the title role of Puccini’s “Gianni Schicchi”) took the podium to conduct Leoncavallo’s glorious Italian romantic classic  “I Pagliacci”.

[Below: Maestro Placido Domingo; edited image, based on a publicity photograph from the Los Angeles Opera.]

The Italian filmmaker Franco Zeffirelli designed this production, first seen in Los Angeles in 1986 (which I saw). This dazzling, glittering, smashing production was punctuated with over-the-top costumes, stilt-walkers, the Los Angeles Opera house-donkey Sue, brilliant colors and flamboyance, with squadrons of vociferous children storming the stage along with athletic acrobats et al, all mixing it up for a stage utterly gyrating with moving action.

[Below: the parade announcing the arrival of the players; edited image, based on a Craig T. Mathew photograph, courtesy of the Los Angeles Opera.] 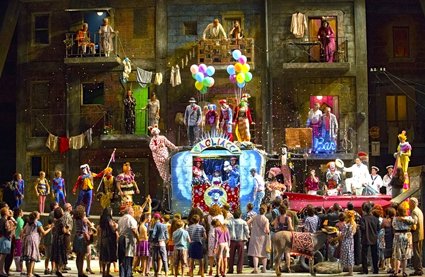 Silvio and Nedda have, between them, have some of the most beautiful love music in all of opera, which Martinez and Bonner sang wonderfully. 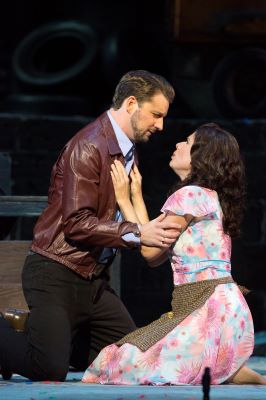 Nedda rebuffs an attempt at her seduction from the dark, ugly thug who is her co-player Tonio (dramatic baritone George Ganigdze from the Republic of Georgia).

This sets up the most famous aria from the opera Vesti la giubba (incidentally the very first phonograph record ever to sell a million copies, thanks to superstar tenor Enrico Caruso early in the 20th century.)

[Below: Marco Berti sing Vesti la giubba as he plans the murder of his unfaithful wife; edited image, based on a production photograph, courtesy of the Los Angeles Opera.] 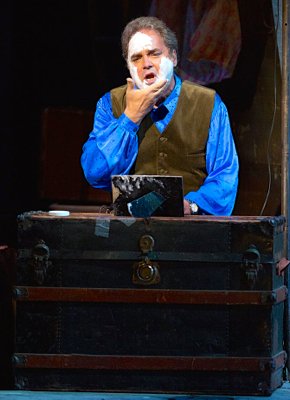 Martinez’ Nedda and Gagnidze’s Tonio play their parts in the Italian comedy they are acting. 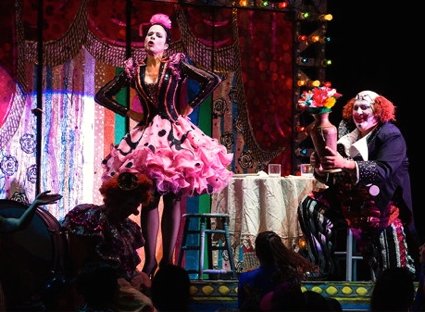 Marco Berti sang the murderous role of Canio in the hyperdramatic style that composer Leoncavallo intended, demanding to know the name of Nedda’s secret lover, which she steadfastly refused to give.

Even though all were dressed as clowns, the play within the play becomes too real for the town’s audience watching on stage. Silvio leaps on stage and Canio takes his murderous revenge on the lovers and belts out The Comedy is Over.

[Below: Canio (Marco Berti, right) demands that Nedda (Ana Maria Martinez, left) reveal the name of her lover; edited image, based on a Craig T. Mathew photograph, courtesy of the Los Angeles Opera.] 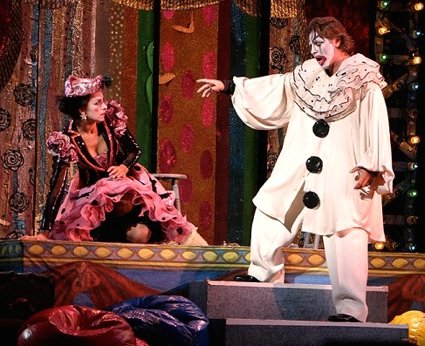 I said in my loudest voice Brav0, Bravo, Bravo to Placido Domingo, giving his all some 30 years after opening Los Angeles Opera, and bravi, bravi, bravi indeed to the Company’s superb team at Los Angeles Opera for this, the most extravagant production of any opera I’ve seen here – and I’ve been here since that opening day 30 years ago.

I recommend this opera, cast and conductor enthusiastically to both the veteran operagoer and the person new to opera.