Until this evening, Seattle Opera had never performed Verdi’s first great success, “Nabucco”. It was mounted in an innovative new production that highlighted the opera’s musical wonders – vocal, choral and orchestral – while presenting the famously implausible plot in a reasonably effective way.

No company should present “Nabucco” without singers adept in the intracacies of the vocal writing of early Verdi operas, especially the prima donna role of Abigaille (sung in the first cast by Pennsylvania soprano Mary Elizabeth Williams).

[Below: Mary Elizabeth Williams as Abigaille; edited image of a Philip Newton photograph, courtesy of the Seattle Opera.] 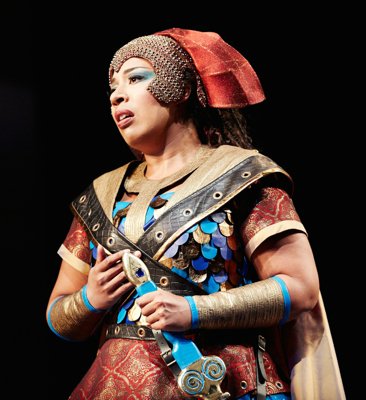 The illegitimate step-daughter of Nabucco (himself a character very freely based on the historical Nebuchadnezzar), Abigaille temporarily seizes the Assyrian throne, but, entangled in battles with her personal demons, she dies, having poisoned herself at opera’s end.

The role’s reputation is that of a voice-killer, with its fierce declamatory passages, challenging coloratura runs, astonishing interval leaps up and down the scale, and need for power in the highest and lowest parts of a soprano’s range. Yet, in the hands of an artist accomplished in this style of singing, Abigaille’s role can be incredibly beautiful.

Mary Elizabeth Williams is an artist whose voice has all the elements of a successful Abigaille. Stunningly sweet-voiced in Abigaille’s plaintive aria Anch’io dischiuso un giorno, vocally expressive at every point in the evening, she powered through the role’s vocal histrionics without the hint of a sharp or unpleasant sound.

[Below: the mentally unstable Nabucco (Gordon Hawkins, left) is confused as to why his daughter, the usurper Abigaille (Mary Elizabeth Williams, right) is sitting on his throne; edited image, based on a Philip Newton photograph, courtesy of the Seattle Opera.] 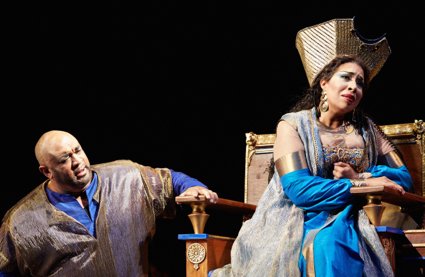 The role of Abigaille has many similarities with the demands of soprano roles written by Giuseppe Verdi in the 1840s (before “Rigoletto”) and before that by composer Gaetano Donizetti (who strongly influenced Verdi’s early operas).

But most of those Verdi operas, other than “Macbeth” and occasionally “Ernani” are rarely performed, so few artists have developed the vocal skills to take on the repertory that Williams sings so effectively.

Unlike Abigaille’s role, the title character Nabucco is within the mainstream of Verdi baritone roles, that are represented in Verdi’s operas all the way to his final opera, “Falstaff”.

Nabucco is a great role and a favorite of Verdi baritones – usually the reason why the opera is revived.

[Below: Gordon Hawkins as Nabucco; edited image, based on a Philip Newton photograph, courtesy of the Seattle Opera.] 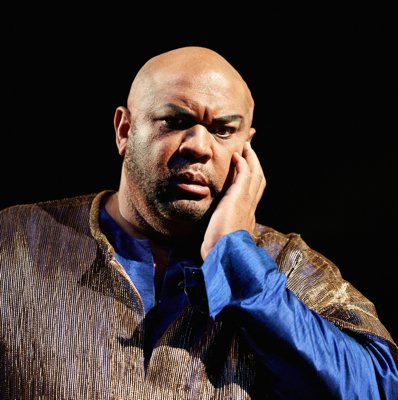 Seattle Opera’s choice for its opening night cast was the Arizona dramatic baritone Gordon Hawkins, a Seattle Opera favorite in such roles as Porgy [Seattle Opera’s Worthy “Porgy and Bess” – July 30, 2011, in which Mary Elizabeth Williams played Serena], the Count di Luna [Seattle’s “Trovatore”: Standing Ovations for Antonello Palombi, Lisa Daltirus – January 16, 2010] and of several key baritone roles in the Stephen Wadsworth productions of Wagner’s “Ring of the Nibelungs” for Seattle Opera in 2009 and 2013.

Hawkins’ portrayal of Nabucco demonstrated a command of what a Verdi baritone needs to have, a mellifluous sound throughout the baritone range, especially in its highest reaches.

Once he is struck by a thunderbolt after declaring himself a God, Nabucco is a pathetic presence, suppliant to Abigaille’s vengeful designs. The music that Verdi wrote for Nabucco at his lowest emotional depths (that include the first great father-daughter duets so central to Verdi’s later operas) is among the finest in the opera, which Hawkins sang with distinction.

The earliest of Verdi’s famous basso cantante roles, Zaccaria, the religious conscience of the Hebrews, was sung in the first cast by New York bass Christian Van Horn.

Van Horn dispatched Zaccaria’s three arias (each with unique vocal challenges) with skill, confirming his emergence as one of the most important young American operatic basses of the past few years.

[Below: Christian Van Horn as Zaccaria; edited image, based on a Philip Newton photograph, courtesy of the Seattle Opera.] 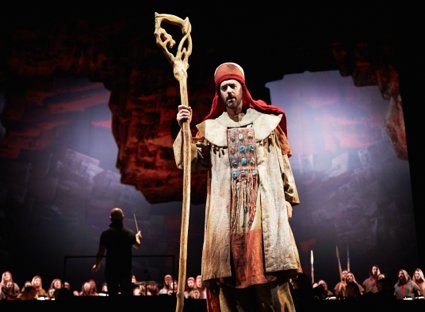 The roles of Abigaille, Nabucco and Zaccaria were double cast, each artist singing in four of the scheduled eight performances.

Florida tenor Russell Thomas as Ismaele and Georgia mezzo-soprano Jamie Barton as Fenena – the two major comprimario roles – added to the star luster. I had admired their performances as Pollione and Adalgisa (and that of their colleague, Christian Van Horn) in Bellini’s “Norma” last Fall [A Second Look: “Norma” at the San Francisco Opera – September 14, 2014] and will have more extensive remarks on their “Nabucco” performances in my review of the second cast.

Other cast members adding to the successful evening were Washington soprano Karen Early Evans as Anna, Washington bass-baritone as the High Priest of Baal and Wisconsin tenor Eric Neuville as Abdallo.

The new production was remarkable in several ways. First, the Seattle Opera’s traditional orchestra pit was covered over and the orchestra moved to center stage. This provided the opportunity for the chorus, itself most often a character in the drama (the Hebrews in their Babylonian captivity) to assemble behind the orchestra, while the principals enacted the drama in front of the orchestra.

[Below: a blasphemous Nabucco (Gordon Hawkins, front center, on floor) is struck by a thunderbolt, while the Hebrews and Assyrians (Seattle Opera chorus) mass behind the Seattle Opera orchestra; edited image, based on a Philip Newton photograph, courtesy of the Seattle Opera.] 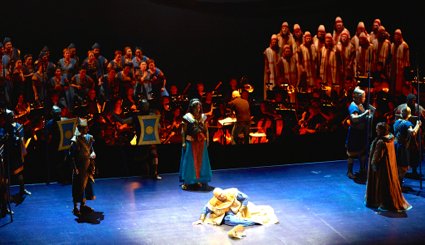 Another distinctive element of the production is the use of projections, replacing sets as the formal visual design, a technique in which the Seattle Opera has been a pioneer.

In general, I found that, for an early Verdi opera like “Nabucco”, this form of staging is theatrically valid and results in a superb sound experience. In my subsequent review of the alternate cast, I will discuss these strengths and what I perceive as the one element (the choice of projections themselves) that warrants restudy.

I recommend the Seattle Opera’s production of “Nabucco” enthusiastically for lovers of Italian opera, with special note of the innovative sonic presentation of the opera, its deep casting, and the extraordinary performance of Mary Elizabeth Williams as Abigaille.