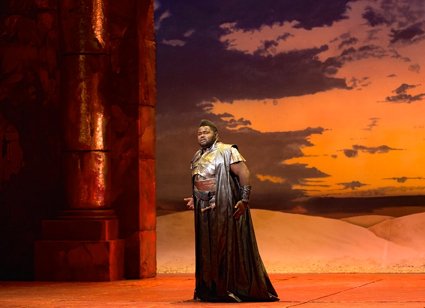 The Glimmerglass Festival is located in New York’s Finger Lakes district. In developing repertory, the Festival often considers operas or productions that have some tie to the surrounding communities.

Thus, the Festival’s interest in the early 18th century Vivaldi opera “Cato in Utica” is easily understood, with a nearby New York city sharing the name of the North African refuge of the Ancient Roman defender of republican values. 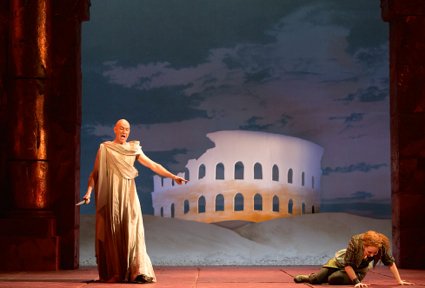 Once the decision was made to explore Vivaldi’s “Cato”, of which only two of Vivaldi’s three acts survive, the Festival staff began an extraordinary adventure.

“Cato” had recently garnered the attention of important musical scholars, notably conductor Alan Curtis and musicologist Alessandro Ciccolini,  but had never been performed in North America.

The Glimmerglass Festival staff decided to develop its own version of the opera, basically using Curtis’ edition of the second and third acts, into which two of Ciccolini’s reworked arias were incorporated. With those revisions, the Festival decided that the two acts for whom Vivaldi had himself written the music could be performed by themselves, without adding Ciccolini’s reconstructed first act.

Vivaldi’s opera is set to a libretto written by the Italian dramatist Metastasio.

Many contemporary productions of baroque operas (particularly those operas based on classical mythology or the fantasies of the poet Ariosto) are time-shifted and set in circumstances that could not have been imagined by their composers and librettists.

But “Cato’s” specific references to events in Roman history during the first century before the common era, argue against bizarre stagings of the drama.

Metastasio’s plot embellishes the historical enmity between Julius Caesar (Cesare) and Cato, the uncompromising critic of Caesar’s dictatorship. Emilia, wife of the Caesar’s deceased enemy Pompey, and Marzia, in Metastasio’s libretto Cato’s daughter, are names of historical personages but their interrelationships and love interests are imaginative.

[Below: Texas countertenor John Holiday, Jr, as Cesare; edited image, based on a Dory Schultz photograph, courtesy of the Glimmerglass Festival.]

However, one historical incident which Vivaldi had wished to end the opera, but was forbidden to do so by political and church authorities, was Cato’s suicide. The Glimmerglass Festival found a way to honor Vivaldi’s original intentions, while still retaining the musical integrity of Vivaldi’s work.

Although the 0pera’s storyline relates to events based in history, the opera’s central design is structured to provide dramatic opportunities to display the vocal virtuosity of six artists, supported by a small orchestra (passionately conducted by Ryan Brown) and continuo.

The six voices are distributed between five high voices and a male tenor, a convention associated with many baroque operas. Also conventional is the assignment of important male roles to countertenors (the modern equivalent of the 18th century male castrato).

In yet another baroque convention, a woman artist (Allegra de Vita, a mezzo-soprano) plays the part of Caesar’s (male) emissary, Fulvio.

[Below: Thomas Michael Allen as Cato; edited image, based on a photograph, courtesy of the Glimmerglass Festival.] 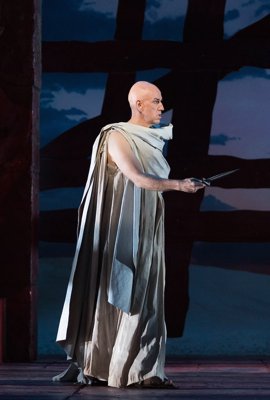 Vivaldi’s operas follow a specific pattern, in which the dialogue that conveys information or action  is sung as recitative over a three instrument continuo, consisting of harpsichord (Christopher Devlin), baroque era cello (Ruth Berry) and baroque guitar and theorbo (Michael Leopold), all three of whom have performed continuo duties with distinction in previous years [See Elegant and Engaging, Lully’s “Armide” Glows at Glimmerglass Festival – July 21, 2012.]

Each of these recitative passages is followed by an aria conveying some emotion (usually anger or anguish over unrequited love), every one in “Cato” a Vivaldi masterpiece.

[Below: Emilia (Arkansas mezzo-soprano Sarah Mesko, left) is the object of the affection of Fulvio (Connecticut mezzo-soprano Allegra de Vita, right); edited image, based on a photograph, courtesy of the Glimmerglass Festival.] 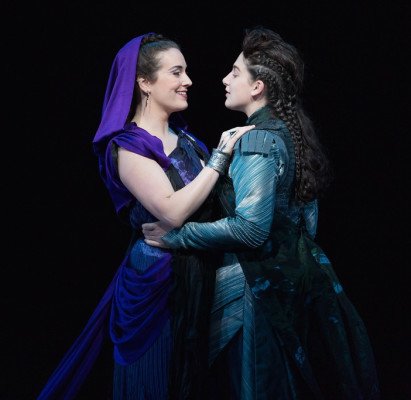 In Vivaldi arias, the voice is in constant motion, often singing an irresistably sweet legato melody. Some arias are an explosion of sound, with runs, trills and passages of coloratura virtuosity. All six of the artists have been cast because of the ability of each to perform these demanding roles.

Every artist was warmly received by the Glimmerglass audience.

Countertenor John Holiday, Jr., whose technical skills and vocal brilliance heralds him a rising star in the baroque repertory, was the obvious audience favorite, the recipient of thunderous ovations after each of his arias and at opera’s end.

In an evening of wonders, Holiday’s Se in campo armato, Caesar’s martial challenge to Cato with its swooping upward vocal passages to high A, was the performance’s greatest show-stopper.

[Below: Arbace (Virginia countertenor Eric Jurenas, right) professes his love to a disinterested Marzia (Megan Samarin, left); edited image, based on a Karli Cadel photograph, courtesy of the Glimmerglass Festival.] 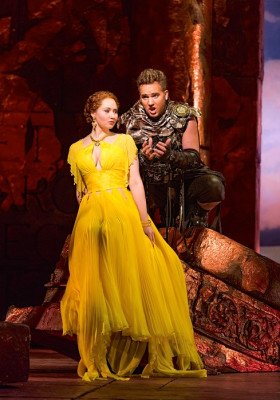 Thomas Michael Allen was a stylish Cato, the staging of his suicide a chilling reminder of the Roman view of an honorable death. The role of Emilia, Pompey’s gritty widow and Cato’s ally, with its own vocal fireworks, was comfortably assayed  by Sarah Mesko.

Allegra de Vita’s Fulvio was brilliantly sung and warmly received. Eric Jurenas was an appealing Arbace, whose countertenor was of intoxicating beauty.

The role of Marzia, whose love affair with Cesare results in her estrangement with her father Cato, was well-sung and convincingly acted by Megan Samarin.

Alan Curtis and the Performing Edition

The existence of a performing edition of Vivaldi’s “Cato” (as with many other baroque masterworks) is the result of the careful restorative work of conductor, director and musicologist Alan Curtis and of his Italian colleague Alessandro Ciccolini.

Poignantly, earlier in the week of “Cato’s” American premiere for which the Alan Curtis edition was used, Curtis died. Curtis’ untimely death is a blow to Vivaldi scholarship.

[Below: Conductor/director Alan Curtis; edited image, based on a publicity photograph for www. operarara.pl.] 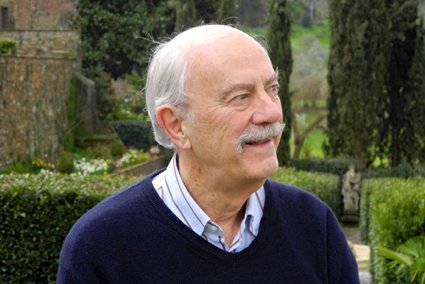 Those familiar with baroque opera and the adventuresome will find this production and cast to be of the highest quality. I recommend the Glimmerglass Festival “Cato in Utica” enthusiastically to all who appreciate this genre.

For those unfamiliar with the genre, I recommend the opera as well, and suspect that many newcomers will succumb to the luxurious melodies and become immediate fans of the art form.

And even those who might find baroque operatic conventions off-putting, may likely concede that the vocal performances are quite amazing.