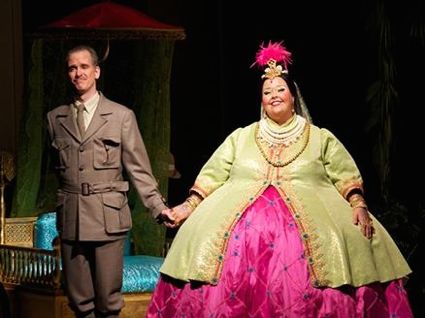 Previously, I conducted an interview with basso Kevin Burdette, which can be accessed at Buff Buffo: An Interview with Kevin Burdette. The following conversation took place in anticipation of Burdette’s scheduled appearances as Doctor Beck Weathers in the world premiere of Talbot’s “Everest” at The Dallas Opera.

[Below: Basso Kevin Burdette; resized image of a publicity photograph.] 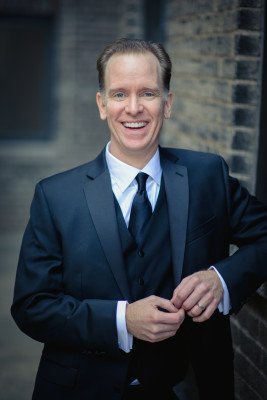 Wm: Since our first sit-down interview a year and a half ago, I’ve had the chance to see you perform again at Santa Fe Opera, this time in their double bill of Mozart’s “Impresario” and look forward to seeing you yet again as Sulpice in Donizetti’s “Fille du Regiment” when that opera not only opens the 2015 Santa Fe Opera season, but is performed for the very first time ever in Santa Fe.

Yet what really interest me about your 2015 calendar is that you have four world premieres scheduled, of operas written by Joby Talbot, Jennifer Higdon, Jake Heggie and Mark Adamo. The first, taking place at the end of January is Talbot’s “Everest” at The Dallas Opera. Tell me about that work.

KB: I am so excited about “Everest” – it is a stunning, gorgeous, moving work, every aspect of which is top tier. The cast (including Sasha Cooke, Andrew Bidlack, and Craig Verm) and conductor (the spectacular Nicole Paiement) are fantastic; the production team, headed by the incomparable Lenny Foglia, is world class; and, most importantly, the amazing creative team of librettist Gene Scheer and composer Joby Talbot have written a breathtaking opera, one that I have no doubt will resonate profoundly with audiences.


[Below: Kevin Burdette (left) in costume as Doctor Beck Weathers and Andrew Bidlack (right) as Rob Hall in The Dallas Opera world premiere production of Jody Talbot’s “Everest”; edited image of a Karen Almond photograph, courtesy of The Dallas Opera.] 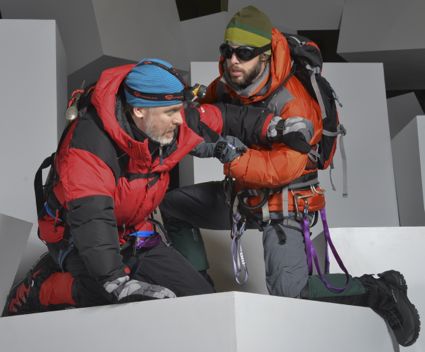 Wm: This is an opera about an true life event that happened less than 20 years ago. The cast and creative team is impressive. Tell me about what the opera is like.

KB: Top of the list, of course, is the music, and Joby has written an incredible score. The brilliant orchestration creates a soundscape that immediately transports the listener to Mt. Everest – evoking, at different times, the profundity of the mountain, the intensity of the sonic world of the mountain, and the stillness and serenity and beauty found only on the top of the world.

Add to that his gorgeous melodic lines (the music, while complex and extremely sophisticated, is accessible and resonates immediately with the listener) and his evocation of the intensity, drama, and longing of the people whose lives were so drastically altered by that fateful expedition in 1996, and you have a score that is impactful, moving, and, ultimately, uplifting.

KB: Portraying Dr. Beck Weathers,  for me has been the uplifiting aspect: Doctor Weathers, after having been left for dead on the mountain, somehow found the will to save himself – both on the mountain, and in a sense, in his life.

[Below: As search parties try to locate him, Doctor Beck Weathers (Kevin Burdette, center), trapped in ice and snow in an avalanche, struggles mentally to stay alive; edited image, based on a Karen Almond photograph, courtesy of the Dallas Opera).] 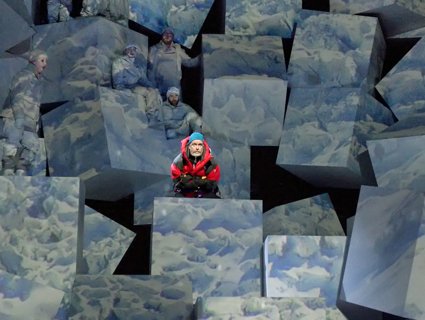 Dr. Weathers lives in Dallas, and I had the immense honor of meeting him. He is an incredible human being – a wonderful and inspiring speaker, with a fantastic sense of humor and joyfulness and huge heart bubbling directly under everything he says – and the opportunity to try to tap into his energy and portray, on some level, his struggle, both internal and external, has been so moving for me.

The librettist Gene Scheer spent many hours with Dr. Weathers when preparing to write the libretto, and the story Gene tells, much of it in Dr. Weathers’ brain while passed out on the mountain, is extremely gripping and very moving.

Wm: Dr Weathers is unconscious, yet the audience knows what happens in his mind. How does Scheer accomplish this?

KB: : it was images of his family that beckoned him back to the real world, back to life. Gene distilled the family into one person, Dr. Weathers’s daughter Meg (performed by the wonderful Julia Rose Arduino, a 7th grader here in Dallas), who appears throughout the opera (in Beck’s mind) and ultimately draws him back to reality. As an artist, this has significance for me personally.

KB: My own daughter, Isla, is five months old (she was born in Santa Fe on August 1st), and Meg’s beckoning to her daddy resonates deeply with me as I hear and see my own daughter and feel the love that draws me to her, just as Dr. Weathers was drawn to his family.

[Below: Basso Kevin Burdette, holding daughter Isla; edited image, based on a a personal photograph, courtesy of Kevin Burdette.] 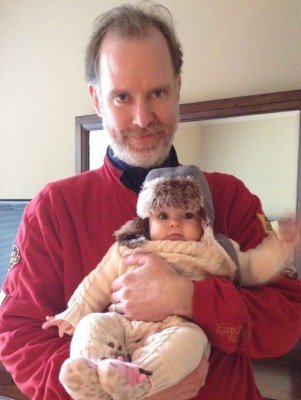 Wm: I take it you have no reservations about recommending this opera to anyone who can get to Dallas to see it.

KB: As you can see, I am extremely enthusiastic about this opera! The story of the expedition is incredible in the first instance; Gene Scheer found a way into the vast story and distilled it into a stunning libretto.

Joby Talbot created a breathtaking score; the production team has created an astonishing and thrilling space onstage; and the cast, conductor, and wonderful musicians of The Dallas Opera’s orchestra and chorus are thrilled and eager to premiere this wonderful opera.

Wm: Before we talk about your other world premieres occurring this year, let’s talk about the 2014 double bill in Santa Fe. First of all, you joined the cast at a very late date, did you not?

KB: I did! “The Impresario” is notoriously prickly to stage, and the wise producers at Santa Fe Opera, together with the fantastic director Michael Gieleta, decided to update the score – and bump up the story – by interpolating additional Mozart arias that would allow the characters to expand (and expound) a bit. When it was decided that Puff, who otherwise only sings in the finale of the opera, might have an aria – and a patter aria, at that – the role became very compelling!

Wm: I wrote of your Otto van der Puff in “Impresario” that you are a “master of rapid, tongue-twisting comic wordplay [who]  had the audience in stitches during a wacky patter song, and secured the kind of roaring ovation at song’s end to which he has become justifiably accustomed.”

Do you have a special technique for learning these comic tongue-twisters? It always seems flawless. Does it ever happen that you trip over your tongue in performance?

[Below: Otto van der Puff (Kevin Burdette, center, second from right, arm outstretched) tries to make the argument to Yuri Yussupovich (Anthony Michaels-Moore, left, seated)  as to why the demands of Chlotichilda Krone (Meredith Arwady, right) should be resisted, even though supported by her lover and their banker (David Govertsen, standing left); edited image, based on a Ken Howard phorograph, courtesy of the Santa Fe Opera.] 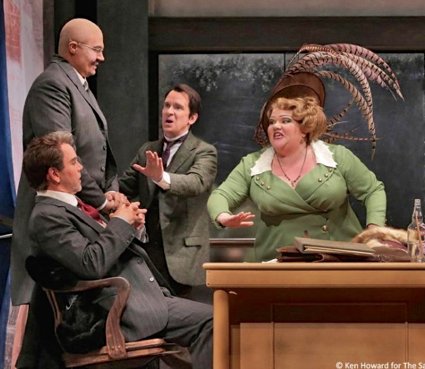 KB: I have a couple of techniques that I use for particularly wordy passages. A favorite is one in which I start with the final syllable of a phrase, sing it, then add the syllable preceding the already sung syllable, then sing to the end, then another syllable and sing to the end, until all syllables are added. This process helps me disengage my brain while engaging my tongue. Mostly, though, I just repeat the phrases over and over until they become second nature. And drink a lot of coffee….

Wm: You worked with director Ned Canty in Menotti’s hilarious “The Last Savage” in Santa Fe, and, as I mentioned earlier, you will be opening the 2015 Santa Fe season in “Fille du Regiment”. You’ve spoken highly of Canty’s work. What can we expect out of your collaboration with him this summer?

KB: Ned is a genius and is one of my favorite directors to work with. One of the many things that makes Ned amazing is that he has a default, backup (and invariably fantastic) idea for every dramatic beat of every character – but before he shares those ideas, he lets the performer bring his or her own ideas to the table.

Sometimes he likes his idea better, sometimes the performer’s; more often than not, though, he finds a way to use the performer’s idea and instinct as a baseline and then adds dimensions and colors to it that the performer had not thought of. Which is to say, he is the consummate collaborator.

This process works very well in comedy – as you saw in “The Last Savage.” It works wonderfully, as well, in more serious scenes. And one thing I am particularly looking forward to for this “Fille du Regiment” is the way that Ned will treat the wistful longing for love and companionship that Sulpice and the Marquis of Birkenfeld explore in the second act – the opera, while funny in moments, is also very much about heart, and I am certain Ned will be looking for the best way to reveal that heart.

Wm: You’re preparing roles for the world premieres of Higdon’s “Cold Mountain”, Heggie’s “Great Scott” and Adamo’s “Becoming Santa Claus”. What can you tell us about those three works?

KB: I am so excited to be involved in these world premieres. I have been a fan of Jennifer’s orchestral music for a while (she went to high school not too far from where I did, in East Tennessee, and is still friends with one of my vocal coaches in Knoxville, Carol Zinavage Shane), and I was thrilled when I heard that Santa Fe Opera and Opera Philadelphia had commissioned an opera from her.

Imagine my delight, then, when I heard that I would be a part of that premiere! Add Gene Scheer to the mix, together with much of the production team from “Everest” (including Lenny Foglia), and you have a project I cannot wait to begin!

As for “Great Scott,” Jake Heggie’s importance in and to opera and vocal music cannot be overstated, and the opportunity to premiere one of his operas is a dream come true for me – especially with this world class cast, including Frederica von Stade and Joyce diDonato, two of the most amazing artists ever, who have collaborated with Jake on so many incredible works.

And then there’s the opportunity to work with the legendary Terrence McNally (whose “Masterclass” I saw on Broadway while auditioning for Juilliard in the 90s!) and Jack O’Brien – I mean, what’s not to love?

Also, I am so pleased I will also be in the world premiere of Mark Adamo’s “Becoming Santa Claus,” with The Dallas Opera. I hold Mark in highest esteem – we have known each other for years, since we were together at New York City Opera – and I cannot wait to work with him, Paul Curran (for the first time – VERY exciting), and Emmanuel Villaume (with whom I had a blast working on “The Grand-Duchesse of Gerolstein” in Santa Fe) on this exciting project.

Wm: Congratulations on these exciting assignments. We’ll talk about them again at a later time.