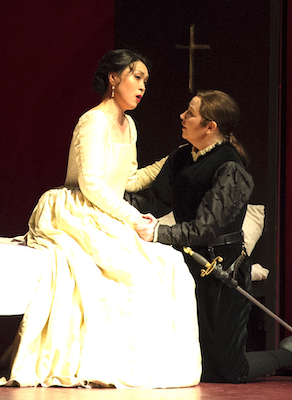 Carsen proved again that Bellini’s operatic version of the Romeo and Juliet story needs no staging gimmickry to be a theatrical triumph. 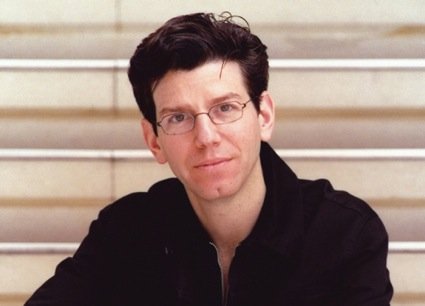 The cast was a strong one, notable for Siurina’s beautifully sustained legato passages and Deshayes’ technically brilliant Romeo. Siurina and Deshayes dominate the opera, with one or the other and often both together in almost every scene.

[Below: Ekaterina Siurina (left) as Giulietta and Karine Deshayes (right) as Romeo; edited image, based on a Mirco Magliocca photograph, courtesy of the Opéra National de Paris.] 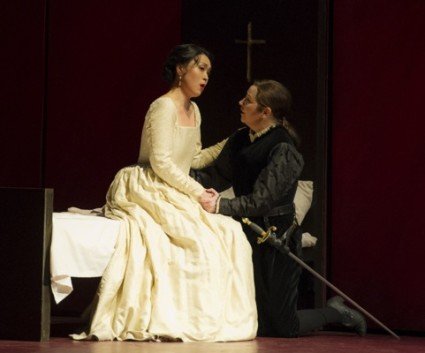 If the role of Tebaldo is not as long as those of the two lovers, it has attracted many of the leading lyric tenors of the current and previous generation, with its first act cavatina and cabaletta (both verses sung) and a fierce duet with Romeo at the entrance to Juliet’s tomb.

Castronovo not only sang the part with distinction, it is one of the operas in which he can share the stage with his wife, Ekaterina Siurina.

The “I Capuleti” Revisionists

“I Capuleti” was created at breakneck speed when Bellini was called on to substitute for another composer who failed to deliver a commission on time for the Venice Carnival season.

[Below: Giulietta (Ekaterina Siurina, center, in white) pleads with her father Capellio (Paul Gay, left, in red); edited image, based on a Mirco Magliocca photograph, courtesy of the Opéra National de Paris.]

Since the traditions of the period required a composer to write the music of each part to fit the voices of the particular artists engaged by the company for that season, Bellini was expected to write the part of Romeo for the superstar diva, Giuditta Grisi (whose appearance in the role, of course, enhanced the opera’s prospects). [See A Second Look: “Capulets and Montagues” at San Francisco Opera, October 14, 2012.]

Although for much of the history of opera, the convention had been to assign the roles of young men to female voices, the fashion was rapidly changing with the lyric tenor assuming that responsibility. Thus, “Capuleti” came to be regarded as “old-fashioned”.

When the lesser-known works of Rossini, Bellini and Donizetti began to be revived in the mid-20th century, conductors and stage directors advanced various ideas for “repairing” the perceived defects in the opera. 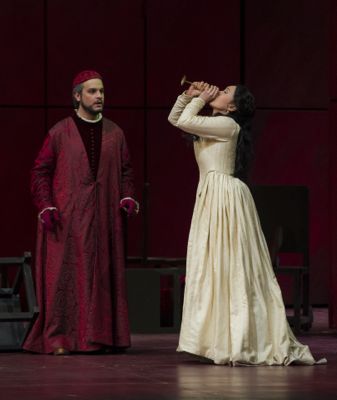 Conductor Claudio Abbado transposed the role of Romeo to the tenor voice, memorialized by a famous recording, permitting posterity to experience the rousing duet at Juliet’s tomb, sung by Giacomo Aragall’s Romeo and Luciano Pavarotti’s Tebaldo.

Some stage directors who accepted the vocal ranges of each character as Bellini had left them, decided that shifting the action to other times than Renaissance Italy, or introducing elements to the action not called for by the opera, might enhance its believability, or, perhaps, audience interest.

In 1996, Carsen developed a new production for the Grand Théâtre de Genève, during the era of Hugues Gall’s stewardship of that company.

[Below: the Capulet faction of the Guelphs is addressed by Tebaldo (Charles Castronovo, far left) and Capellio (Paul Cox, far right); edited image, based on a Mirco Magliocca photograph, courtesy of the Opéra National de Paris.]

Rather than time-shifting the drama to another era, or introducing images and concepts not part of the original design, Carsen centers the action firmly in Renaissance Verona, in the savage battles of the city-state’s Guelfs (of which the Capulets are part) and Ghibellines (which include the Montagues/Montecchi).

Every part of the production reinforces the Guelf-Ghibelline divide. A large table accommodates nearly three-dozen Guelfs who plot acts of revenge with their Guelf comrades Capellio and Tebaldo.

A furious battle ends the first act. The fight erupts again AFTER both sides witness the bodies of the lovers dead in the Capulet’s tomb. Rather than the lovers’ deaths producing a sobering reconciliation, each side blames the other and the cycle of violence continues.

[Below: the Capuleti and allied Guelphs enter into battle with the Montecchi and allied Ghibellines; edited image, based on a Mirco Magliocca photograph, courtesy of the Opéra National de Paris.] 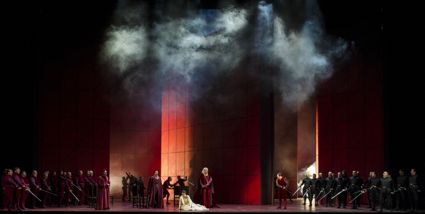 The version of the Romeo and Juliet story that librettist Romani adapted was earlier than the Bard’s. Romani’s story eliminates three quarters of the Bard’s characters and all their motivations and required sub-plots.

Stripped of plot complexity, the story becomes one of two lovers trying to escape their oppressive fate.

The psychologically stifling environment in which the lovers corresponds to the high vertical spaces that are the principal features of Michael Levine’s sets.

Obviously, if both lovers were of a mind to escape entirely from the world into which they were born and create a new life elsewhere, their conflict with that world would disappear.

[Below: Giulietta (Ekaterina Siurina, front left) in her bedroom; edited image,  based on a Mirco Magliocca photograph, courtesy of the Opéra National de Paris.] 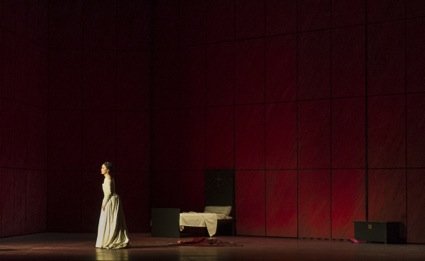 But Juliet, like Elvira in Verdi’s “La Forza del Destino”, is ambivalent about the idea of separating herself from her family. Her first instinct is to try to persuade her father to let her choose as her husband the man who killed her brother, although it would seem an impossible blessing to obtain.

Though initially skeptical about Lorenzo’s idea of the death-feigning drug, Juliet prefers that her family is certain that she is dead to the idea of she and Romeo disappearing in a surreptitious flight from Verona.

Ultimately, when Lorenzo’s scheme goes awry, the star-crossed double suicide brings the escape that Romeo and Juliet desire, even if (in Carsen’s staging of the opera) it merely reinforces the vendetta between the embattled Veronese  factions.

[Below: Romeo (Karine Deshayes, above) drinks poison, thinking that Giulietta (Ekaterina Siurina, below) is dead; edited image, based on a Mirco Magliocca photograph, courtesy of the Opéra National de Paris.] 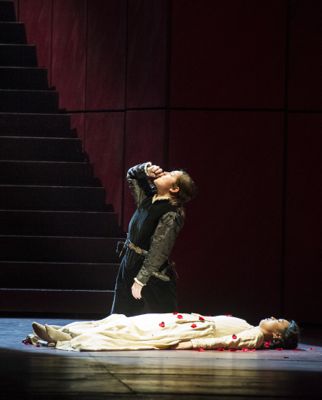 There are several reasons to regard this production as a world treasure, including the most obvious, that it visually and theatrically translates an underappreciated masterpiece – Bellini’s “Capuleti e i Montecchi” – in a way that modern audiences can relate to it.

As the story of two lovers, each of whom represents one of the two sides in an exhausting conflict, it could just as well be located any war-ravaged community – say, the Damascus of 2014 – yet, it need not be time- and place-shifted from Verona to make such a point.

In fact, Levine’s sets and costumes, even though meant to be Verona-specific, have a universal feel. The Guelfs are dressed in red Renaissance costumes, and the Ghibellines in blue (adding context to Tebaldo’s suspicious observation that the red-colored clothing worn by Romeo is a disguise). The red and blue can represent any lethal antagonists of any time.

During the opera’s rather martial overture, the choristers dressed as Capulet Guelfs each takes one of the 30 or so swords arranged at the footlights and marches up a tall staircase at stage right (the staircase image reappearing in the final scene as the steps leading to Juliet’s tomb).

At any instant, any perceived hostile act or word from either side will lead to sword fighting, accompanied by characteristic rhythmic music that I like to call Bellinian rat-a-tat-tat. In contrast, the long melodic lines of Romeo and Giulietta have an otherworldly, escapist feel.

The resulting combination of music, drama, staging and scenic design is a masterpiece, crafted by a quartet of artists – composer Bellini, librettist Romani, stage director Carsen and set and costume designer Levine – collaborating over a 16 decade time span.

I regard the Carsen-Levine production as a world treasure, and recommend that any opera goer able to attend the 2014 revival in Paris to do so.

For my review of a performance with Ekaterina Siurina and Charles Castronovo see: Castronovo, Siurina Lead Magical San Diego Opera “Pearl Fishers” – May 9, 2008