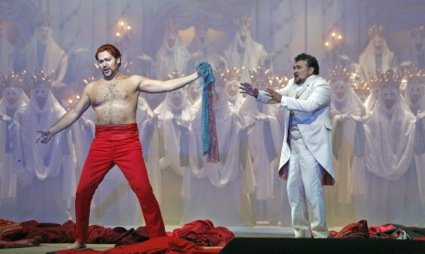 Three weeks later I returned to the War Memorial Opera House to experience a performance of the production once again.

The San Francisco Opera, referred to the opera as “Mephistopheles”, using the poet Goethe’s name and spelling for what is, in Boito’s opera, is the title character.

Unlike Hector Berlioz and Charles Gounod, Boito has shifted the focus of the opera from Faust (especially, his seduction of Marguerite/Margherita and its consequences) to Mephistopheles and the wager between Hell and Heaven as to whether the power of good or the power of evil would win Faust’s soul.

Significantly, although “Mefistofele’s” structure more closely resembles Goethe’s poems Faust Part One and Faust Part Two than the works of Berlioz or Gounod, Boito differed from both Goethe and the French composers by making Mephistopheles the central (and title) character. 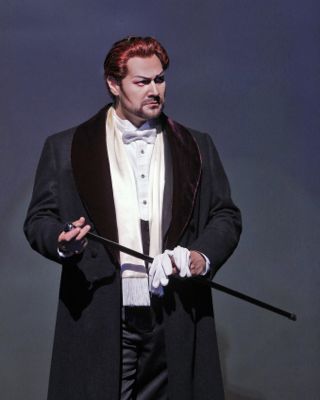 Although Margherita is assigned one of the opera’s most famous melodies and Faust has serenely romantic music throughout the opera, the protagonist of the opera is so clearly and completely Mefistofele that one could not imagine mounting the opera without a major basso voice in that role.

When the opera was produced in 1989 and 1994 at the San Francisco Opera and in 1999 at the Houston Grand Opera, Mefistofele was sung by American basso Samuel Ramey.

The 1999 performances, taking place during the then Houston Grand Opera General Directorship of David Gockley, also cast Patricia Racette as Margherita (and Sondra Radvanovsky as Helen of Troy). 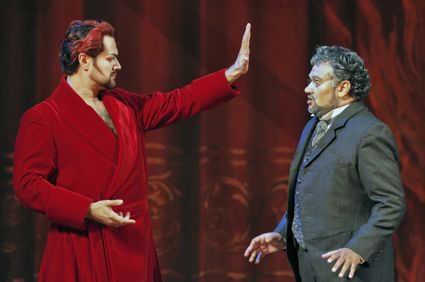 Several years later, Gockley having left Houston for San Francisco, plans for a new co-production between San Francisco Opera and a major Italian opera house were in active consideration. Those plans reached the point that Hollywood cinema Director William Friedkin was announced (in Los Angeles) as the production’s creative force.

For reasons that appeared to be outside of the control of the San Francisco Opera, the Friedkin project was abandoned, but the idea of “Mefistofele” returning to San Francisco eventually bore fruit.

A planned revival of the Carsen production, of which the San Francisco Opera was no longer part owner, became a reality. A half-share in the production was purchased (the New York Metropolitan Opera owning the rest).

In 2013, with Mefistofele no longer a role in Samuel Ramey’s active repertory, Gockley chose Russian basso Ildar Abdrazakov as Mefistofele.

The Carsen production follows a strict scheme for staging the opera. The choice of Russian basso Ildar Abdrazakov proved effective, both vocally and histrionically in the many different routines that Carsen devised for the diabolical character.

After the opera’s prelude, Abdrazakov’s Mephistopheles climbs out of the orchestra pit. At another point he climbs down a rope out of a box on stage right and then climbs into a box on stage left.

He is a snarling, depraved presence at the Witches’ Sabbath, a flirtatious one with Dame Martha. He is capable of philosophical disputation with Faust, and comradely banter with the Celestial Forces.

Even though Mefistofele is onstage for most of the opera (occasionally seated as an observer in one of the celestial boxes), this production requires the Faust, as a demonstration of Mefistofele’s magical prowess, to fly through the air fastened at his lower back to a rope. A soaring Faust (that one critic of old likened to Mary Martin’s Peter Pan) is a theatrical tour de force.

(I confess I always breathe a bit easier when the tenor returns to the stage floor, as I suspect some of the tenors in this production do as well.)

To me the most effective images, both musically and dramatically, are the Garden Scenes. In the first scene, as a stunning effect, one sees an old woman – surely, Margherita’s mother – turning the crank of an appletree-bedecked turntable representing Dame Martha’s Garden.

Courting Margherita on the turning disk, Faust sings such seductive music that he (at Mefistofele’s bidding) tricks Margherita into giving her mother a lethal sleeping potion, after which Faust seduces and  impregnates her.

It is at the Witches’ Sabbath that Faust becomes aware of Margherita’s distress – murder charges for the deaths of her mother and her infant, followed by Margherita’s bouts of insanity. In the second Garden Scene, which is now wintry and bleak, Mefistofele attempts to secure Margherita’s soul for Hell. Celestial voices foil his plans and Margherita ascends to Heaven.

[Below: Mefistofele (Ildar Abdrazakov, left) tries to persuade Margherita (Patricia Racette, right) to come with him; edited image, based on a Cory Weaver photograph, courtesy of the San Francisco Opera.] 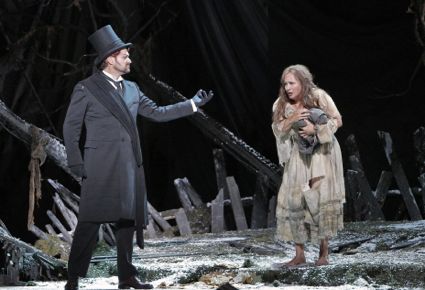 Racette’s ambitious schedule of performances in “Mefistofele” were not her only San Francisco assignment this month. Famously, she took over responsibility for the lead role in a world premiere on behalf of an ailing colleague [World Premiere Review: Patricia Racette’s Gritty “Dolores Claiborne” at San Francisco Opera – September 18, 2013], learning the new role with less than a month’s notice.

On two occasions during the month Racette performed the roles of Margherita and Dolores Claiborne on consecutive days. Quite a few members of this Sunday matinee audience had been at the previous night’s “Claiborne”, preceding her performance as Margherita by only 16 hours.

Her Margherita proved to be yet another great Racette performance, both vocally and dramatically – an astounding accomplishment, even for one of the our day’s reigning dramatic sopranos.

[Below: Mefistofele (Ildar Abdrazakov, center left in red pants) loses in his bid for the soul of Faust (Ramon Vargas, center right in white coat and pants; edited image, based on a Cory Weaver photograph, courtesy of the San Francisco Opera.] 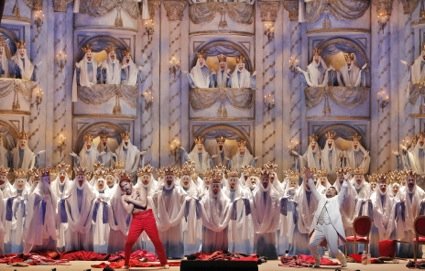 Nicola Luisotti and the San Francisco Opera Orchestra and Chorus

The obvious love affair between the San Francisco Opera Orchestra and the Opera’s Music Director, Nicola Luisotti, was again evident with this complex work. He conducted exuberantly, waving a fist to indicate the required fortissimo of the E major chords of the Prologue in the Heaven, drawing forth both the passion and sublety of Boito’s score.

The San Francisco Opera chorus, itself directed by Chorus Master Ian Robertson, alternated singing the roles of celestial hosts and denizens of Hell. 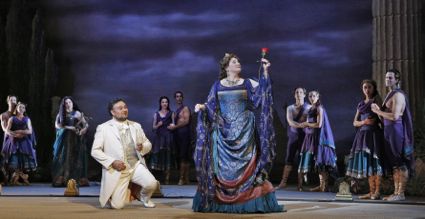 The Easter Parade and the Witches’ Sabbath

In the Carsen production, the Easter Sunday scene that begins Act I (that occurs after the Prologue) has the high spirits and wild sexuality of a New Orleans Mardi Gras, or a Venice or Rio de Janiero Carneval.

Among the Eastern pageant attractions are lively rounds of simulated sex by a gaudily dressed (then undressed) pair of performers as Adam (Brazilian dancer Luke Lazzaro) and Eve (American dancer Brook Broughton).

A production that pushes the sexuality envelope for Easter Sunday, can be expected to be much, much wilder for the notorius scene of the Witches’ Sabbath. Here simulated male and female frontal nudity has been a feature of the production since its inception.

One notable difference between the Carsen production’s 1989 and 1994 appearances in San Francisco were the prosthetics devised to portray the male frontal nudes in the notorious Witches’ Sabbath.

[Below: Faust (Ramon Vargas, right, in white suit) is beckoned by the celestial forces as Mefistofele (Ildar Abdrazakov, left) realizes he has los his bet; edited image, based on a Cory Weaver photograph, courtesy of the San Francisco Opera.]

In the earlier years these accoutrements to the male costumes were flabby caricatures, like the prosthetic for actor Mark Wahlberg in Paul Thomas Anderson’s film Boogie Nights.

In 2013,  the prosthetics have astonishing realism, the male costumes are so artfully constructed that I’m sure that some in the audience thought many of the choristers were stark naked.

(I assume that it was only coincidence that this Witches’ Sabbath was taking place on the same day as the gay-themed, sadomasochistic-oriented Folsom Street Fair, held simultaneously a mile or so away from the War Memorial Opera House.)

But, in the end, celestial morality triumphs, as Mefistofele is defeated in his attempt to win the trophy of Faust’s eternal soul, thus losing his wager with God in Heaven!

For my review of another Robert Carsen production in San Francisco, see:  Night at the Museum: “Iphigenie en Tauride” Springs to Life in S. F. – June 17, 2007.

For some additional remarks on Goethe, Faust, Marguerite and Mephistopheles, see: The Devil’s Details Part II: Thoughts on Gounod’s “Faust”.