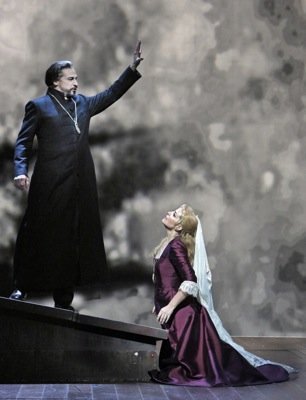 These Wagnerian performances are my suggestions for consideration of opera goers in Washington, DC, San Francisco, Chicago and Phoenix. One is on my schedule for upcoming reviews:

As her first offering in her first season as Artistic Director of the Washington National Opera, Francesca Zambello mounts the Neil Armfield production of “Tristan und Isolde” with heldentenor Ian Storey singing the first four Tristans and Clifton Forbis the fifth. Dramatic soprano Deborah Voigt is Isolde in all performances. [See my review of two of these principals performing in a different production, see Forbis, Voigt Brilliant as Lyric’s Tristan and Isolde – Chicago, February 24, 2009.]

The sets are by Brian Thomson. Philippe Auguin conducts.

[Below: Irene Theorin as Isolde; edited image, based on a Scott Suchman photograph, courtesy of the Washington National Opera.] 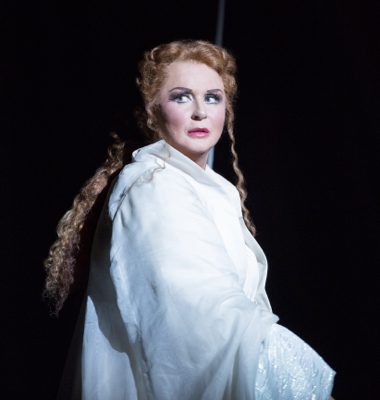 [WHB Note – On September 7, the Washington National Opera announced that Deborah Voigt has wirthdrawn from all performances and will be replaced by Irene Theorin [for my review of Theorin performances in San Francisco and Munich, see Luisotti Leads Superb “Turandot” Cast In David Hockney’s Treasured Production – San Francisco Opera, September 9, 2011 and Yonghoon Lee’s Calaf Tames Theorin’s Time-Traveling Turandot – Bayerische Staatsoper, Munich, November 28, 2012 for the first four performances. The final performance will be sung by Alwyn Mellor [for my review of a Mellor performance, see Wagner’s “Walkuere” Victoriously Revived at Seattle Opera – August 5, 2013.]

Greer Grimsley is the Dutchman in this production by Petrika Ionesco, a co-production with Liege, Belgium’s Opera Royal de Wallonie. Grimsley is joined by Petra Maria Schnitzer as Senta, Ian Storey as Erik and Kristinn Sigmundsson as Daland.

[Below: Greer Grimsley as the Dutchman (above) and Lise Lindstrom (below) as Senta; edited image, based on a Cory Weaver photograph, courtesy of the San Francisco Opera.] 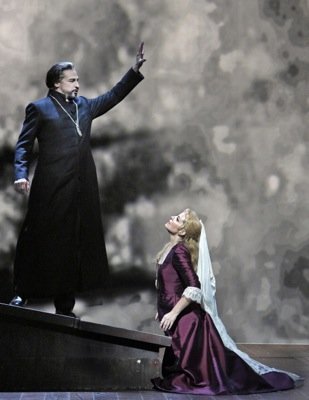 Ionesco’s beautiful sets and Lili Kendaka’s stunning costumes for the Alfano work suggest that this Belgian”Dutchman” will be as popular and well received in San Francisco as it was at its Liege premiere.

[Subsequent to the opening night, Lise Lindstrom replaced Petra Maria Schnitzler, and the San Francisco Opera removed Ionesco from his positions as stage director and production designer, as a result of artistic differences in transferring the Liege production to San Francisco.]

A new production by Tony-winning production designer John Caird (“Les Miserables”) and role debuts by Paul Groves as Parsifal and Daveda Karenas as Kundry, joined by the Amfortas of Thomas Hampson, are among the attractions of the Lyric Opera “Parsifal”.

[Below: Paul Groves (front right) as Parsifal; resized image, based on a Dan Rest photograph, courtesy of the Lyric Opera of Chicago.] 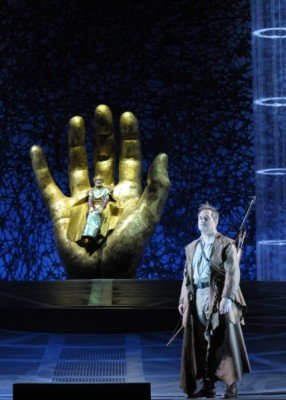 The Senta is Lori Phillips, who stepped in triumphantly for two of the three Bruennhildes for the first Seattle “Ring of the Nibelungs” [see my reviews at Seattle Opera’s Sumptuously Sung, Sensuous “Siegfried” with a Surprise – August 7, 2013 and World Treasure: Seattle Opera’s Gripping and Glorious “Götterdämmerung” – August 9, 2013.]

[Below: Raymond Aceto (left) in costume for Daland and Mark Delavan (right) in costume as the Dutchman; edited image of a photograph from Facebook.com/az opera .] 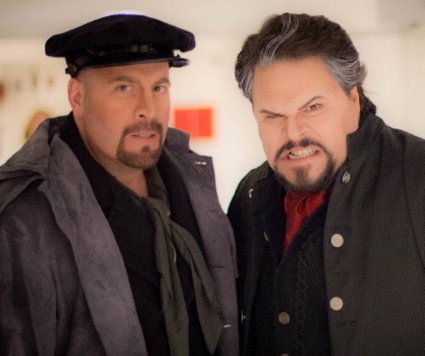