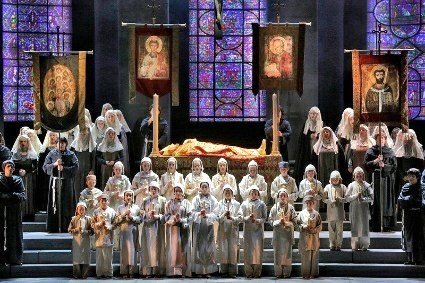 An extraordinary work, dating from 1958, Pizzetti reverentially sets to music T. S. Eliot’s 1936 verse-play that found prewar 20th century significance in the  moral choices of a 12th century king’s man who, when appointed archbishop, crossed his king to become a defender of the church.

[Below: Ferruccio Furlanett0 as Archbishop Thomas Becket; edited image, based on a Ken Howard photograph, courtesy of San Diego Opera.] 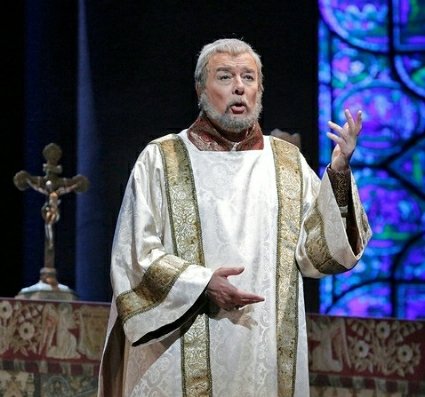 A review of this performance can be approached in different ways.

Obviously, one wants to comment on the work itself, an unfamiliar one for most opera goers.  One also can spend considerable time on the subject matter, the 12th century French Norman geopolitical and European church politics that led Thomas Becket to the choice of martyrdom.

But I find that the experience of attending a performance with this cast in this production in this opera house to transcend other considerations. This proved truly to be a remarkable experience.

[Below: the Herald (Allan Glassman, left) brings important news to the Three Priests (from cebter left to right, Gregory Reinhart, Greg Fedderly and Kristopher Irminter; edited image, based on a Ken Howard photograph, courtesy of the San Diego Opera.] 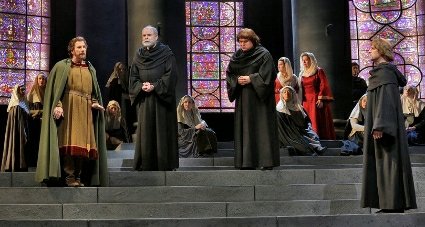 The juxtaposition of artistic considerations and economic realities have caused opera companies in this second decade of the 21st century, to share resources and production costs, to a greater extent than was the case even a decade earlier. Often now an artistic team is chosen to plan a production for use by several companies.

[Below: the First Tempter (Joel Sorensen, kneeling left) reminds Archbishop Thomas Becket (Ferruccio Furlanetto, seated right) of the sensual pleasures he has enjoyed prior to assuming his office; edited image, based on a Ken Howard photograph, courtesy of the San Diego Opera.] 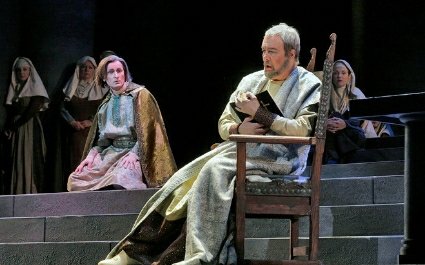 The San Diego Opera has been a prominent exemplar of multi-institutional approaches to opera production. But it is also an institution with the resources and audience support to depart from the familiar fare that makes up the bread and butter offerings of most North American opera companies.

The new production celebrates one of the most remarkable relationships between an international opera star and an opera impresario, that of Furlanetto and San Diego Opera’s general director, Ian D. Campbell.

[Below: the Second Tempter (Malcolm MacKenzie, seated left) offers riches to the Archbishop (Ferruccio Furlanetto, standing right), if he will reconcile with his temporal sovereign; edited image, based on a Ken Howard photograph, courtesy of the San Diego Opera.] 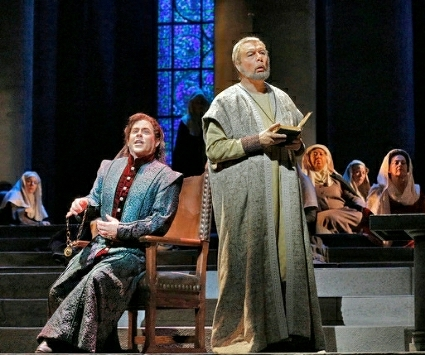 This is Campbell’s 30th opera season. We are getting close to the 30th anniversary of Furlanetto’s San Diego Opera debut (in the title role of Verdi’s rarely performed earliest opera, “Oberto”). The production of Pizzetti’s opera, indulging their three decade partnership, proved a triumph.

The elegant, cinematic unit set by Ralph Funicello was so realistic that anyone who has spent time in the famous Canterbury Cathedral will instantly recognize this seeming reproduction of the unique steps to the cathedral’s altar.

[Below: the Third Tempter (Ashraf Sewailam, standing ) offers the Archbishop (Ferruccio Furlanetto, kneeling at prie-dieu) the support of a faction of barons if he would lead an insurrection; edited image, based on a Ken Howard photograph, courtesy of the San Diego Opera.] 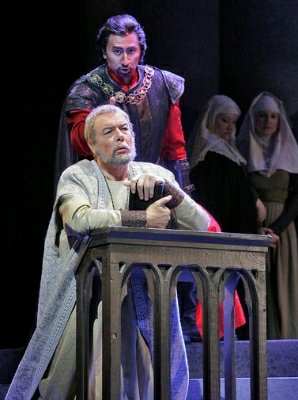 Pizzetti’s rich orchestration reflects a mid-century reverence for the work of such modernist melodists as Stravinsky. In the second act, that takes place after Becket has determined to become a martyr, the music is especially lyrical, reminiscent at times of Richard Strauss’ orchestration, with one moment that might seem to belong to the third act of Wagner’s “Tristan und Isolde”

Much of the second act continues the through-composed, relentlessly dramatic and compelling musical matrix on which this opera is built.

[Below: the Fourth Tempter (Kevin Langan, standing) assures the Archbishop (Ferruccio Furlanetto, seated) that he would ultimately prevail if he accepts martyrdom; edited image, based on a Ken Howard photograph, courtesy of the San Diego Opera.] 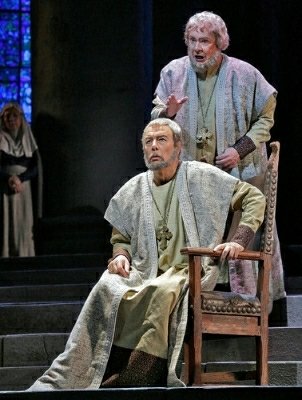 Since the opera follows to such a great extent Eliot’s verse play, many passages of the opera are in a parlando – sung speech – style. But that sung speech (in Italian, with English supertitles) is always absorbing.

As the opera’s audience, we empathize with the agonies felt by the priests (excellently performed by Greg Fedderly, Kristopher Irmiter, and Gregory Reinhart) who have ministered to the cathedral’s flock during the Archbishop’s long absence that ends just at the opera’s beginning. 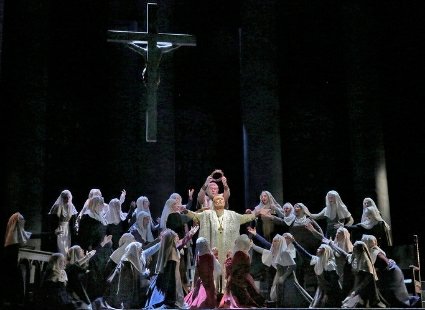 The female voices comprise two soloists (Susan Neves – whose large voice is often called upon to sing such dramatic soprano roles as the lead in Puccini’s “Turandot” – and the respected mezzo Helene Schneiderman) and a chorus of nuns, who comment on the plight of the surrounding community created by the dissension between archbishop and king almost in an oratorio style.

However, to me, the great parts in this opera are centered in the lead and comprimario male roles. We experience Furlanetto’s Archbishop’s psychological torments as the four tempters sort out the courses of action that the Archbishop might follow to reconcile himself to or revolt against King Henry or, alternatively, to choose a martyr’s death.

[Below: the Four Knights (Joel Sorensen, Malcolm MacKenize, Ashraf Sewailam, Kevin Langan) who will carry out the assassination prepare their swords as the nuns, led by First Chorus (Susan Neves, at right, taller of the women in red ) and Second Chorus (Helene Schneiderman, at right, the shorter woman in red); edited image, based on a Ken Howard photograph, courtesy of the San Diego Opera.] 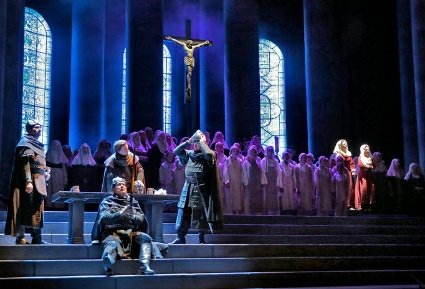 [Below: a chorus of boys join the priests and nuns in celebrating the martyrdom of Thomas Becket (Ferruccio Furlanetto, lying in state, center; edited image, based on a Ken Howard photograph, courtesy of the San Diego Opera.] 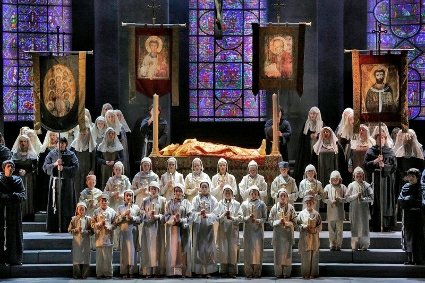 I try to give special recognition for those opera houses that seem a felicitious venue for a particular opera production. In the case of Pizzetti’s opera, the San Diego Civic Auditorium stage proved to be a spectacular setting for this work, Funicello’s sets beautifully fitting the stage and the Civic Auditorium acoustics giving a brilliant resonance to orchestra and principals. The lighting by Alan Burrett was noteworthy.

Obviously, great care was given to all of the roles that support Furlanetto’s Archbishop, most every one of whom I have cited on these pages for masterful characterizations in other performances. Allan Glassman was the Herald. Gregg Fedderly, Kristopher Irmiter, Kevin Langan, Malcolm MacKenzie, Gregory Reinhart, Ashraf Sawailan and Joel Sorensen – all major talents – gave each of the men’s “numbered” roles special significance.

Towering over all this talent was the extraordinary portrait of the soul searching Archbishop Becket (as reconstituted in the words based on Eliot and set to music by Pizzetti) and interpreted by Furlanetto’s powerful and expressive vocal instrument.

The San Diego Opera Saturday night audience (which I have come to believe is the “best-dressed” audience I encounter on my regular travels to opera houses in several states and countries) gave the work a standing ovation and gave to Furlanetto and Campbell, whose work is so appreciated in this city,  a truly affectionate response.

I recommend this cast and production by the San Diego Opera.