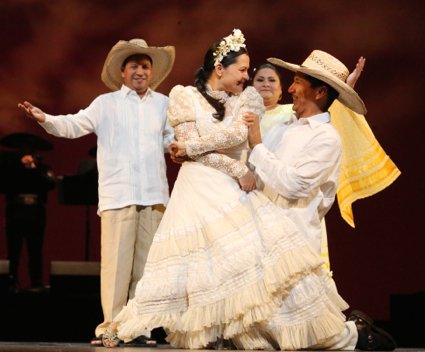 [Below: the Mariachi Vargas de Tecalitan amidst representations of monarch butterflies; edited image, based an Edward Wilensky photograph, courtesy of the San Diego Opera.] 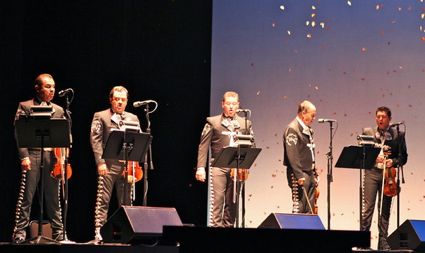 Surely you jest, you say, but no kidding: San Diego Opera presented CRUZAR LA CARA DE LA LUNA — To Cross the Face of the Moon — on March 16, 2013, not just once, but twice in one day (i.e. double the fun). This short piece lasts only 90 minutes, but we should be treated to much more of this genre !!

Yes, San Diego Opera notes this as being the first Mariachi Opera. The work was commissioned by the Houston Grand Opera whose production this is. It was seen previously in Houston and Paris (I heard a partial pirate recording of the Houston show, saw their pictures and loved it.)

Greeting the arriving audience Saturday afternoon was a very colorful, festive plaza in front of the San Diego Civic Theater with a large stage and a terrific Mariachi band getting the audience warmed up and in tune for what they were about to see inside. Margaritas in wild colors, booths and kiosks with Mexican tidbits, cheering crowds made for a wonderful greeting for this new, sold-out production.

[Below: Brittany Wheeler, left, is Diana and Brian Shircliffe is Mark; edited image, based on an Edward Wilensky photograph, courtesy of the San Diego Opera.] 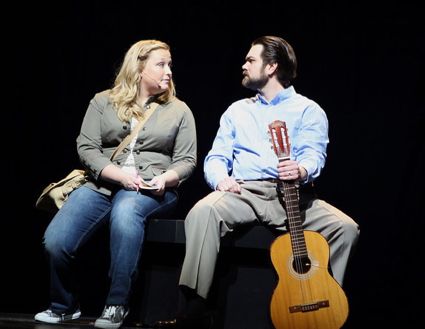 Inside the Mariachi Vargas de Tecalitlan 12-piece Mariachi orchestra/band were on stage at the back of the stage, with five traditional violins, two guitars, a Mexican string bass, the harp, and three brass with “chokes” (makes them sound like clarinets when used as in jazz bands), with the conductor/director standing to their right behind the curtains.

The story told in this piece is best summarized by San Diego Opera: “Mark, a Mexican-American, dealing with the approaching death of his immigrant father, faces questions about his own place in the world — straddling two cultures — as well as that of his father and his American daughter. As long-buried secrets are revealed, he finds himself dramatically re-evaluating his own understanding of what makes a family.

[Below: Octavio Moreno as Laurentino; edited image, based on an Edward Wilensky photograph, courtesy of the San Diego Opera.] 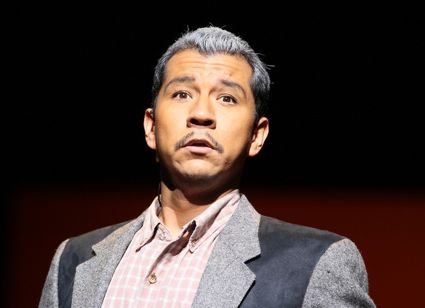 Like the Monarch butterflies which migrate every year to the birthplace of Mark’s father, the members of the Velasquez family must travel both physically and spiritually between Michoacan and Texas and look deep into their hearts before they learn where they truly belong.”

All of the cast were making their debut, and none are known — not yet but now are –to traditional American opera-goers. The ninety minute, one-act show is indeed an opera in every regard, with much acting, dance sequences (outstanding), solos, duets,  quartets, stage props, with all of the cast clad in essentially modern street-dress.

[Below: Cecilia Duarte as Renata; edited image, based on an Edward Wilensky photograph, courtesy of the San Diego Opera.] 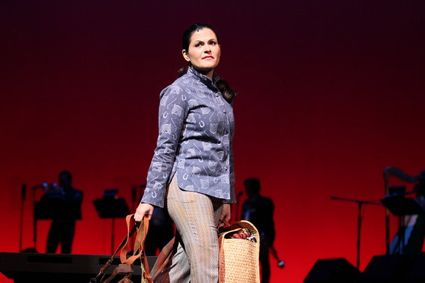 But the story is a tear-jerker (a comment I heard from a great many) with the mother and the grandfather passing during the performance — indeed it opens with the dying grandfather in his couch as monarch butterflies are seen in the skies.

At the beginning he is given a very soulful solo guitar serenade by his son, who also closes the piece with that solo number as his father passes and his spirit is carried aloft by the monarch butterflies — an extremely emotional ending with few dry eyes — certainly not for me!

[Below: the dying Laurentino ( Octavio Moreno, right, in bed), is attended by Renata (Cecilia Duarte, left) and Diana (Brittany Wheeler, center); edited image, based on an Edward Wilensky photograph.] 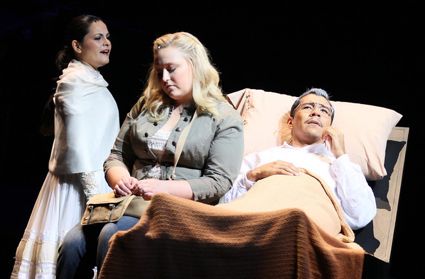 Within the month I had seen two superb Mariachi bands perform in Cozumel and Maya Riviera in Mexico – highlighting centuries of traditional Mexican musical lore revered throughout the Hispanic World.

Its cultural amenities are extremely rich reaching back more than two thousand years with spectacular advances in civilization such as the Mayan World with achievements in advanced celestial calculations, mathematics, literature and art at least the equal to that of ancient Egypt.

No, it wasn’t written by Wagner, Mozart, Shostakovitch, et al, but by Mexico’s Jose’ “Pepe” Martinez. This is a semi-staged production in full costumes presented in both English and Spanish.

It features the quite famed Mariachi Vargas de Tecalitlan band which has been widely recorded and is a Grammy winner, which I have seen in Mexico City along with the Ballet Folklorico. See their website with sound at www.mariachimusic.com !!

Over the last 60+ years I have had the pleasure of seeing the spectacular ancient cultural sites of not only the Mayans, but also the Olmecs, Aztecs and many others, hearing the regional music and wildly colorful costumes — all suggesting how this could be amalgamated into an Opera. And so it has been!

This is a story truly reflected in millions of families similarly situated, presenting issues American audiences may not appreciate fully, loaded with emotions, crises, obstacles, political agendas, also seen in many other immigrant communities in America from the Irish, Italian, German, Polish, Chinese, Philippinos, et al, coming here for over two centuries.

Almost all of us blessed to be here in America are immigrants — including my family — also evaluating more than one culture, history, religion and background. I found this piece extremely emotionally moving.

This piece references that truly extraordinary annual migration of Monarch butterflies which travel north to Pacific Grove on the Monterey Peninsula. Thereafter they return south to Mexico to the location celebrated in this opera! Many perish in these migrations . . .

When the lights came on, the roar from the audience was the most I’ve ever heard in this house!! Using regular written scores as any operatic orchestra uses, they totally brought down the house with the best, by far, Mexican Mariachi music I’ve ever heard — and I love this genre.

But all of us season subscribers of San Diego Opera agreed that it is very much an opera, it works with the Mariachis as the orchestra very well, and we all want to see more! And did – as we emerged with ears ringing from all the cheering back out onto the plaza, here was another Mariachi band to greet us with even more festivities, concluding a wonderful afternoon.

We all hope this composer – and others too — get busy creating some more operatic works – which I suspect they will after a reception like this. Thanks certainly goes to San Diego Opera, its boss Ian Campbell and the whole team for making this happen. BRAVI !!

[For the review of an opera on an analogous theme, the exploration of the impact of the lives of a parent and grandparents on a Chinese-American woman, see: Brilliant “Bonesetter’s Daughter” Dazzles at San Francisco Opera – September 20, 2008.]