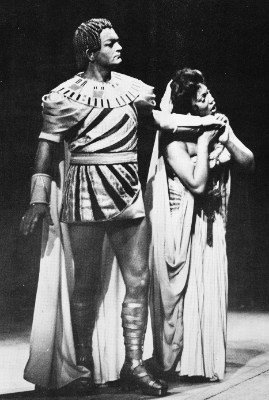 Note from William: This post continues my series of observances of historic performances that I attended at San Francisco Opera during the general directorship of Kurt Herbert Adler. This is the second of ten observances of  performances from the company’s 1963 Fall Opera season.

Eight days later, I saw her second Aida of the season, the second offering of my 1963 Saturday night subscription (allowing me to see two reigning operatic superstars, Sutherland and Price, on back to back Saturdays).

[Below: Soprano Leontyne Price; edited image, based on a photograph attributed to the Associated Press.] 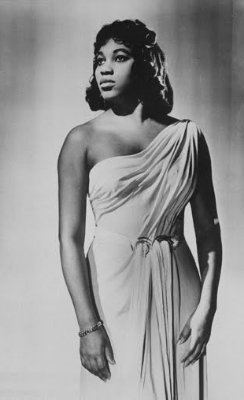 Price’s role debut as Aida had taken place on that very stage when the then 30 year old soprano replaced the ailing Antonietta Stella for two of her three scheduled performances (the third Aida assumed by Leonie Rysanek) [See Young Leontyne’s 1957 S. F. Opera Debut Season: A Supernova is Born for an extended discussion of the importance of San Francisco Opera in the evolution of Price’s performance and recording careers.]

Although Leontyne Price’s professional operatic debut was in the role Madame Lidoine in Poulenc’s “Dialogues of the Carmelites” at the San Francisco Opera in 1957, Aida is a role more closely associated with her.

Her seventh War Memorial Aida would take place almost a month later, then she would not sing the role again in San Francisco (performance number eight) until 18 seasons later.

Her eighth Aida took place because General Director Kurt Herbert Adler, in his farewell season, contrived to have this soprano, of whom was such an important mentor, “replace” another artist so as to paired for one legendary night with a superstar tenor of whom Adler was also an important mentor, Luciano Pavarotti.

There was, of course, a considerable difference between the public’s recognition of Leontyne Price in 1957 than in 1963. In the earlier year, although she did have a not unimportant resume, she had no experience on the opera house stage.

Her scheduled San Francisco Opera debut had been one of many roles in Poulenc’s “Dialogues of the Carmelites”. With no other operatic stage experience, assigning her the title role of “Aida” in 1957 was a big risk. Six years later, she was major recording artist and operatic celebrity – a sure bet to sell out the opera hourse for each performance.

It may be a surprise for some who might consider the late 1950s and early 1960s as the time that the sopranos Maria Callas, Leyla Gencer and Leontyne Price were major opera stars, might find my account of events of 1957 and 1963 to be interesting.

I have already described the fact that the tickets for my first “Aida”  were actually tickets to see Maria Callas in “Lucia di Lammermoor”, but that Callas was fired by the San Francisco Opera [See Callas Fired, An Opera Changed – S. F. Opera’s “Aida” at the Fox, November 7, 1957].

The replacement for Callas’ Lucias was Gencer, whose career as a  coloratura diva and champion of the bel canto era soprano roles was to become legendary. But before September 1957, Gencer had not sung a single Donizetti or Bellini role, and her San Francisco performances of Lucia as Callas’ replacement were the first Lucias of Gencer’s career.

Since Gencer was already scheduled (even though she was still a relatively unknown artist then) to sing Violetta in “La Traviata” in San Diego the previous week, to have two Gencer assignments as the only offerings of the San Diego part of the tour was considered too risky.

Riaky also was the idea of having the almost unknown Leontyne Price appear in San Diego in the title role of an opera which, at the time the change of opera was announced, she had never sung. However, reflecting decades later with the knowledge that I would only see Price as Aida on one occasion, I much prefer it to have been this performance at the War Memorial in San Francisco, rather than the suboptimally staged “Aida” at San Diego’s Fox Theater.

Price and Konya Together Again 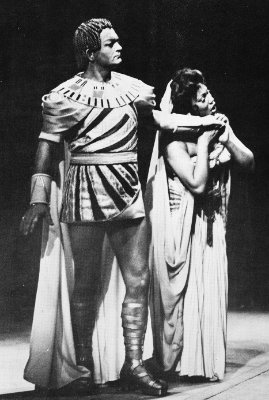 Together, Price’s dramatic soprano and Konya’s spinto tenor were a powerful duo, especially in the resonating acoustics of the War Memorial Opera House.  I saw them paired in the War Memorial later that season as Tosca and Cavaradossi in Puccini’s “Tosca” and in 1965 as Leonora and Don Alvaro in Verdi’s “La Forza del Destino” and Riccardo and Amelia in Verdi’s “Un Ballo in Maschera”.

But, but beyond the lovers, Aida and Radames, “Aida” requires a large cast of big voices. Price and Konya were joined by Regina Resnik, who, as Amneris, the week before had made her War Memorial debut as a mezzo-soprano.

Resnik  had debuted as a dramatic soprano in San Francisco 17 seasons prior and had sung ten performances total over three seasons in six roles (including both Donna Anna and Donna Elvira in Mozart’s “Don Giovanni”, surely one of the only singers to have performed both roles on the San Francisco stage).

[Below: Regina Resnik, who made her San Francisco Opera debut as a mezzo in the role of Amneris; edited image, based on a production photograph.] 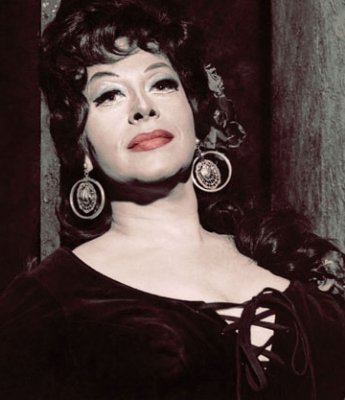 This performance was Resnik’s second and last Amneris at the War Memorial.

Not being old enough to have seen Resnik as a soprano, I had only experienced her performances as a mezzo-soprano. In that vocal register, she sang 34 performances of seven roles in six seasons in San Francisco.

She had a commanding onstage presence and was a superb actress as Amneris, as Fricka in Wagner’s “Die Walkuere”, as Klytemnestra in Richard Strauss’ “Elektra” and, of course, in the title role of Bizet’s “Carmen”.

Although Resnik was memorable in each of the roles in which I saw her, later that season I saw her in the role that is most closely associated with her San Francisco Opera career, that of the Countess in Tchaikovsky’s “Queen of Spades”. She sang the Countess in four seasons, it representing 20 of her 34 War Memorial performances.

John Shaw, a major baritone voice, associated with Great Britain’s Covent Garden, was a rousing Amonasro. Shaw’s only appearances for the San Francisco Opera were in the 1963 season. He appeared in a total of ten performances in which he performed four different roles, all memorably.

[Below: British baritone John Shaw, who played Amonasro; edited image, based on a promotional photograph.] 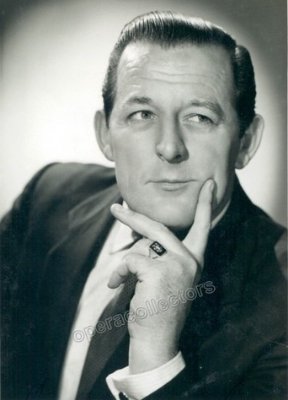 Rounding out the impressive cast was Giorgio Tozzi as Ramfis. I would see each of the five artists in other roles at the War Memorial.

Although I had seen “Aida” previously, with such important artists as Herva Nelli, Blanche Thebom and Nicola Moscona, this was the first time I saw it appropriately staged (by Paul Hager), with a uniformly excellent cast of principal singers.

The production was mounted in observance of the 150th anniversary of Giuseppe Verdi’s birth. 2013 is, of course, the year in which Verdi’s 200th birth year anniversary is celebrated.