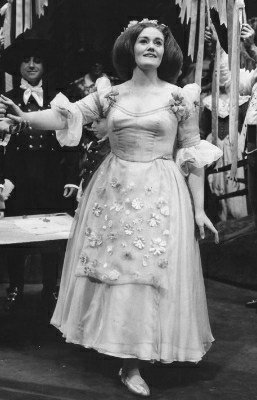 Note from William: This post continues my series of observances of historic performances that I attended at San Francisco Opera during the general directorship of Kurt Herbert Adler. This is the first of ten observances of  performances from the company’s 1963 Fall Opera season.

My first opera of the 1963 Fall season provided me my first opportunity to see the Australian superstar sensation, coloratura soprano Joan Sutherland. Although she had appeared in the 1961 season in the title role of Donizetti’s “Lucia di Lammermoor”, illness had prevented her from opening the Fall 1961 season as scheduled, and she appeared only twice that year.

This was my second experience attending a live opera performance with great coloratura diva (each with a first rank Italian tenor starring with her). My first Lucia starred Leyla Gencer and Gianni Raimondi [See Young Gencer’s Stunning “Lucia” at L. A. Shrine – November 10, 1957.]

[Below: Joan Sutherland as Amina; edited image, based on a Louis Melancthon photograph for the New York Metropolitan Opera.] 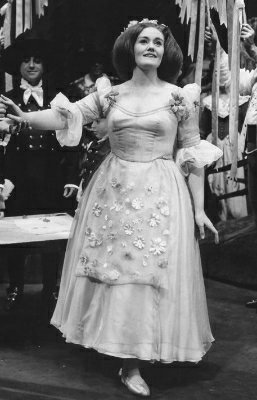 After this third performance , she was to sing 59 additional times at the War Memorial, for a total of 62 performances in 11 roles over 12 seasons. I saw her at least once in every one of the 12 seasons.

Almost a third (20) of her performances were singing the three most famous operas of Vincenzo Bellini, “Sonnambula”, “Norma” and “I Puritani”. There were 13 performances of three Donizetti works, nine each for operas (or operettas) of Verdi and Lehar, six for Johann Strauss and five for Massenet.

This performance was the San Francisco Opera debut for Conductor Richard Bonynge, an expert on early 19th century Italian opera. Bonynge was  also the vocal advisor to Sutherland, who was his wife.

Famously displeased with Francesco Molinari-Pradelli, the conductor of Sutherland’s first two War Memorial appearances, Bonynge conducted every one of Sutherland’s last 60 performances there.

In Arthur Bloomfield’s The San Francisco Opera 1922-1978, Bloomfield recounts that at Sutherland’s second San Francisco performance as Lucia, Bonynge, sitting in Box A next to General Director Kurt Herbert Adler, “leaned over the side and cried ‘Porco (Pig) . . . [when] Molinari failed to pause sufficiently for an embellishment.”

[Below: Conductor Richard Bonynge; resized image, based on a promotional photograph.] 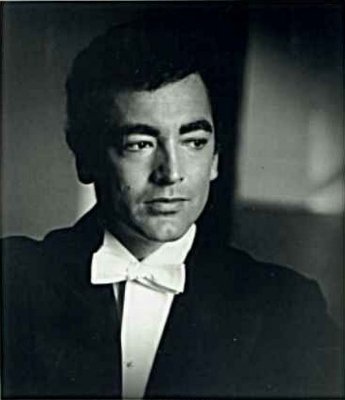 In addition, Bonynge conducted 17 other performances in which Sutherland did not appear – Rossini’s Semiramide” with Montserrat Caballe and Marilyn Horne and Donizetti’s “Lucia” with three different divas.

The cast that surrounded her included tenor Renato Cioni, then San Francisco Opera’s lead Italian tenor, who sang the role of Elvino ardently and with charisma.

Having already appeared in San Francisco with Spanish soprano Victoria de los Angeles, I would see him in later seasons with Renata Tebaldi in “La Boheme”, in the title role of Verdi’s “Ernani” with Leontyne Price and as Enzo in Ponchielli’s “La Gioconda” with Leyla Gencer. One of the tenors associated with Maria Callas, Cioni was an obvious favorite of the mid-century divas.

The basso role of the Conte Rodolfo was sung by Minnesota-born Richard Cross, only a couple years out of the Army, which had drafted him at approximately the same time as rocker Elvis Presley. Conte Cross was tall and handsome with a wonderful lyric baritone voice, adept at Bellini’s languid melodies.

[Below: Basso Richard Cross; resized image of a promotional photograph.] 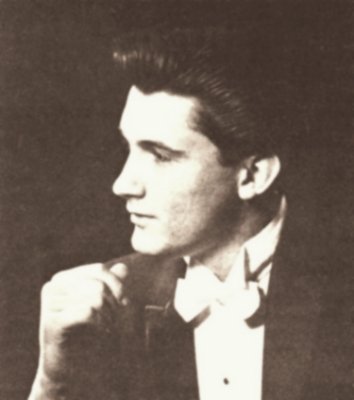 The three performances as Rodofo were Cross’ only appearances with the San Francisco Opera. He pursued his career in Europe, becoming a regular at the Frankfurt Opera.

In this opera requiring two coloratura sopranos, the other, who sings Amina’s would-be nemesis Lisa, was Italian soprano Jolanda Meneguzzer. With a leggiero coloratura voice, she herself sang the role of Amina (and had a vocal weight more often associated with the role of Amina than did Sutherland, whose voice approached the weight of dramatic soprano). 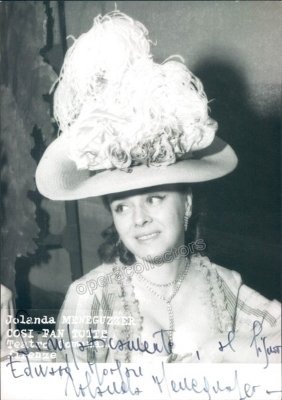 Bellini’s 1830 blockbuster is one of the most melodious of Italian operas – one that defines the early 19th century coloratura style. Most of the legendary sopranos of early and mid-19th century Europe were associated with it.

Sutherland was only one of the late 20th century divas that made it a defining role. Among contemporary singers, it is associated with such superstar luminaries as Natalie Dessay and Anna Netrebko.

[Below: Amina (Natalie Dessay) contemplates her upcoming wedding in the 2004 Santa Fe Opera  performance of “La Sonnambula”; edited image, based on a Scott Humbert photograph, courtesy of the Santa Fe Opera.] 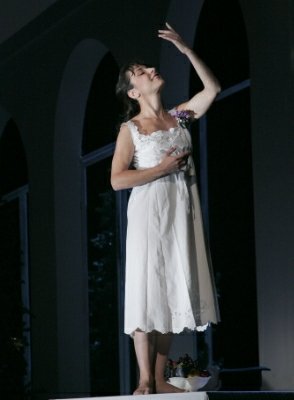 Most audiences would find the plot improbable, but as the Italian composer-musicologist Ferruccio Busoni wrote – it’s fruitless to impose standards of realism and credibility on an opera, because, in real life, people simply do not communicate by singing in an operatic style.

But “Sonnambula” yields so many musical wonders that I believe it is worth one’s while simply to accept what’s happening on stage and immerse oneself in the moment. In fact, I still have vivid memories of Sutherland, as so many divas had before and after her, portraying Amina’s sleepwalking past a turning mill-wheel, then awakening to the glorious, technically brilliant music of the opera’s denouement. 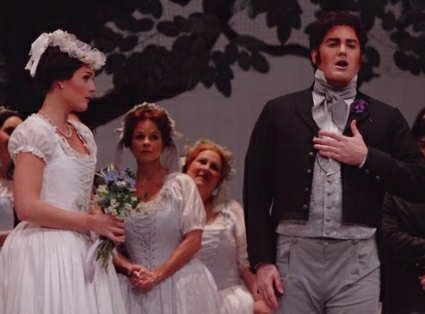 I missed the 2007 production of “Sonnambula” staged by a great 20th century Amina, Renata Scotto, at Florida Grand Opera. I am pleased that 50 years after Sutherland, Cioni and Richard Cross charmed me at the San Francisco Opera, to be able to see and hear this beautiful opera in its 2013 Florida Grand Opera revival.