The first month of the 2012-13 season Los Angeles Opera season has been designed to showcase the legendary talents of the opera company’s general director Placido Domingo and music director James Conlon.

Conducting six performances of Verdi’s “The Two Foscari [I Due Foscari]” and five of Mozart’s “Don Giovanni”, Conlon is scheduled to be the only conductor standing at the Music Center’s podium, until Domingo’s run of performances as Francesco Foscari, Doge of Venice, is completed. Then Domingo  himself will lead two performances of “Don Giovanni” with substantially the same cast.

With both Domingo and Conlon immensely popular with Los Angeles audiences, this first “mini-season” of the 2012-13 calendar provides the two artists with opportunities to fulfill important career goals. Domingo continues to add roles in the baritone repertory to what is building to a seemingly insurmountable record of the number of roles sung by a single opera singer onstage in a lifetime. That virtually every performance in his career is in a major opera house makes any future challenge to Domingo’s record almost impossible to conceive.

Conlon’s month advances yet another milestone. A conductor who relishes the challenge of “cycles” of great artistic orchestral works – the four operas of Wagner’s “Der Ring des Nibelungen”, the Mahler symphonic cycle – has now added another of Mozart’s three operas with Da Ponte libretti (the “Da Ponte cycle”) at his home company, the Los Angeles Opera. [For my relevant interviews with him on this subject, see: An Interview with Conductor James Conlon, Part 1 and An Interview with Conductor James Conlon, Part 2.] 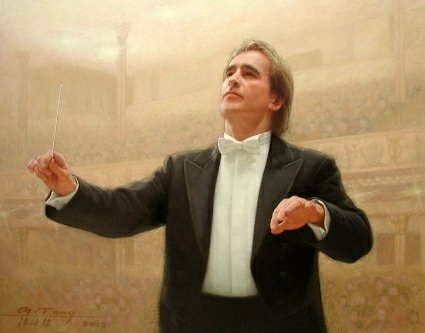 At the opening night of “Don Giovanni” Conlon expressed his view that modern attempts to use, say, Freudian or Jungian psychology as the underlying “concept” in staging “Don Giovanni” are doomed to failure or irrelevancy, because there is no one way – there are more likely infinite ways – to interpret what “Don Giovanni” is about.

To quote Conlon’s article about “Don Giovanni” in the evening’s program “The work is unfathomable in its depths, uncontainable in its breadth, and inexhaustible in its essence . . . Could it be that simply performing and not interpreting the work (however unfashionable that notion might be at this moment in history) is to render to it the greatest service possible?”

Conlon’s greatest service possible was to lead a performance that seemed to meet his own standards for this work of which he is so obviously reverential. From the overture’s opening D minor chords to the D major sextet that ends the opera, the spirit, solemnity, joy, terror and comedy that Mozart intended shines through. (Conlon uses his lectures to make sure the Los Angeles audience is basically aware of what keys Mozart or Wagner has chosen for each part of their operas and what those keys are meant to represent.)

Eight years ago a new Peter Stein production of Mozart’s “Don Giovanni”  was first presented at the Lyric Opera of Chicago. The Los Angeles Opera has mounted the Lyric Opera production that encompasses the somewhat austere sets of set designer Ferdinand Woegerbauer and elegant costumes of Moidele Bickel.

If the sets remind us of no place in particular, they and the costumes are meant to evoke the end of the 18th century Venice circa 1795, before Napoleon Bonaparte  extinguished the Venetian Republic. Over three centuries after the time of the Two Foscari,Venice’s population in the 1770s sometimes included Da Ponte, Mozart’s librettist, and Da Ponte’s friend and fellow ex-priest, the libertine Giacomo Casanova, who is thought to have made suggestions to da Ponte on how to delineate the Don Juan character.

For the Los Angeles mounting of the Lyric Opera’s “Don Giovanni”, Gregory A. Fortner, who last May directed the Los Angeles Opera’s revival of Herbert Ross’ treasured production of Puccini’s “La Boheme”, took on another assignment in which he brings his own personality to a classic production. In this latter assignment, the  lead performer is a veteran of the production’s original staging.

Directing a revival takes special skill, especially with physical sets as unyielding as those of Woegerbauer’s Mozart or Ross’ Puccini, but Fortner used all of the Woegerbauer trappings – the low stairs, the corners, the windows in tall plain structures – to good effect. Fresh, or at least not overworked, dramatic and comedic situations provided an always interesting flow of action in the sequences of scenes that are more like the Bard’s plays than a usual opera.

A world class lyric baritone, D’Arcangelo’s interpretation of the self-indulgent Don includes the prancing steps that we might associate with certain rockstars of the 1960s and 70s. (In Stein’s 2004 production, D’Arcangelo was the Leporello.)

[Below: Ildebrando D’Arcangelo as Don Giovanni; edited image, based on a copyrighted Robert Millard photograph, courtesy of the Los Angeles Opera.] 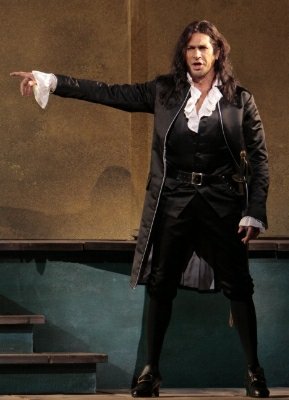 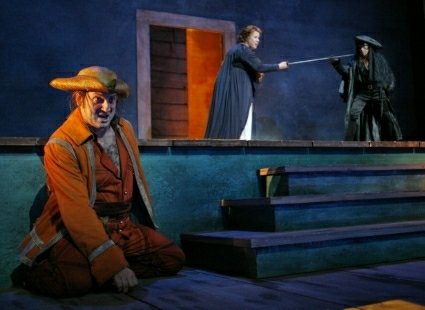 In fact, the relationship between the Don and his servant Leporello is a major focus of the production. Leporello mocks Giovanni’s walk during his opening aria.

That sets the scene for some hilarious moments when each character affects the other’s mannerisms (including the Don’s prancing steps) in the later scene in which Don Giovanni and Leporello have exchanged cloaks.

The exchange of cloaks has its own comic bit, in which Giovanni is disgusted at the lingering smell of Leporello’s body odor and Leporello is delighted at the sweet smell of the Don’s obviously perfumed attire.

Di Giacomo, herself born in Los Angeles County, is a dramatic soprano whose international career is now well-established, showed both power and expressiveness as Donna Anna, and was met with audience ovations for her two major arias.

[Below: Donna Anna (Julianna Di Giacomo, left) explains to Don Ottavio (Andrej Dunaev, right) why they must put off their wedding; edited image, based on a copyrighted Robert Millard photograph, courtesy of the Los Angeles Opera.] 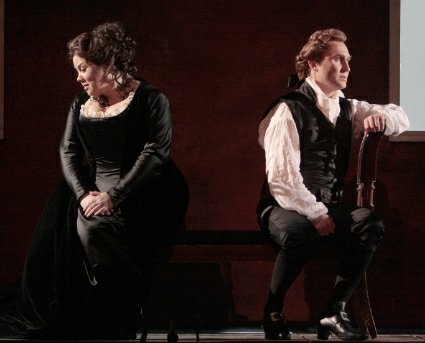 Knowing that Di Giacomo has also sung the role of Lucrezia in Verdi’s “Il Due Foscari” at La Scala in Milan, which is in rotation with “Don Giovanni”, might also be a comfort to the Los Angeles Opera management, should any mishap befall their star soprano in that rarity.

Russian lyric tenor Andrej Dunaev, whose career has been centered in Middle Europe, especially the French and German opera houses of the Rheinland and the Dresden Opera, brought the proper degree of elegance to the role of Don Ottavio, whose two great arias are themselves high points in this richly melodic opera.

Donna Elvira was played by the stylish Finnish soprano Soile Isokoski, whose bonds with Conductor James Conlon go back over a decade. [I first saw Conlon and Isokoski together at the Opera National de Paris in 1992 in the first performances of Richard Strauss’ “Der Rosenkavalier” for both artists.] 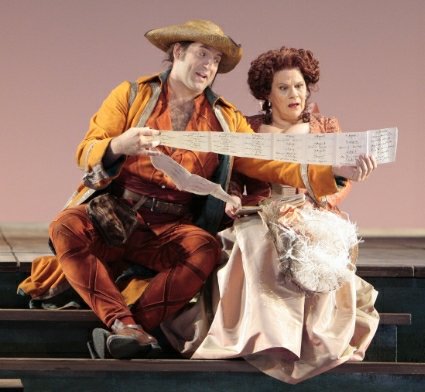 Romanian mezzo-soprano Roxana Constantinescu left a strong impression as Zerlina, which in some past eras has been considered the principal female role in the opera. She is the third member of the team that includes Conlon and D’Arcangelo that participated in both the Los Angeles Opera’s 2011 “Cosi” and 2012 “Giovanni”.

Often, operagoers underestimate the role of Masetto, who is blessed with a large slice of Mozart’s great music, and abundant opportunities to catch the eye (and ears) of audiences. But Masetto may mark a major Mozartean talent. For example, Masetto was the role that first brought the attention of Californians to the talents of Luca Pisaroni [See Kwiecien Excels in McVicar’s Dark Side “Don Giovanni” – S. F. June 2, 2007].

The Los Angeles audience was treated to a very impressive debut as Masetto by Joshua Bloom, known to San Franciscans for his nine comprimario assignments in the middle of the last decade, while an Adler Fellow at the San Francisco Opera. Bloom’s San Francisco Opera assignments culminated in the role of Count Ribbing (Samuele), one of the pair of conspirators in Verdi’s “Ballo in Maschera” who provide the basso lines in the “Ballo” Quintet and who play such a prominent role in the scene in which it is decided who will assassinate the King. 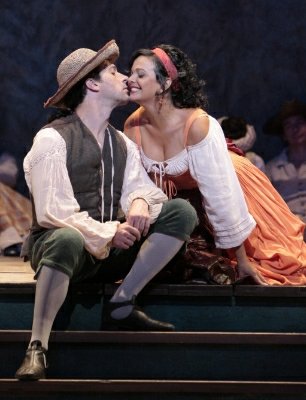 Bloom brought to the character of Masetto, which could played too oafishly, a particular charm. Likely there were many in the audience who sympathized with a the character, agreeing that a bridegroom does have the right to be a bit peevish if his wedding ceremony is broken up by a stranger who publicly attempts, with too little resistance, to seduce his bride-to-be.

Besides acting convincingly, Bloom displayed a formidable basso voice, suggesting that, like it was for Pisaroni, Masetto is the stepping stone to even juicier Mozart basso assignments.

The Descent into the Netherworld and the Moral of the Story

No production of “Don Giovanni” should be without an inventive ending. In the production the Stone Guest, nicely performed by Ukrainian baso Ievgen Orlov, takes a firm stand on the Don’s banquet table. After informing Giovanni on the etiquette of how such a supernatural invitation might be declined, he invites him to dinner in his world, grabbing the Don’s arm.

[Below: the Statue of the Commendatore (Ievgen Orlov, above in white) takes hold of the hand of Don Giovanni (Ildebrando D’Arcangelo, below); edited image, based on a Robert Millard photograph, courtesy of the Los Angeles Opera.] 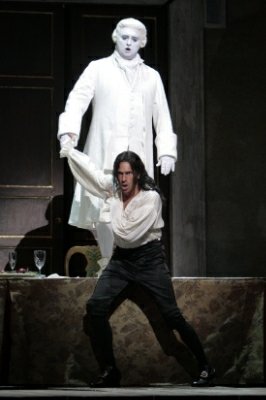 We are treated to the spectacle of flames of hell consuming the Stone Guest and Don Giovanni. As the entire banquet table disappears below the stage, the hands of demons are seen among the flames.

In the final (D-major) sextet, all of the the opera’s characters who remain on earth assemble at the footlights to reflect on the events of the last day. 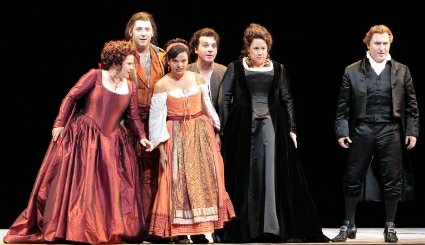 I recommend this performance, for the superb and reverential conducting by Mozartean advocate, James Conlon; for the high quality of the singing; and for always interesting and often illuminating stage direction. The production clearly meets Conductor Conlon’s premise that the opera should simply be performed, free of exotic interpretations not inherent in the Mozart’s and Da Ponte’s masterpiece.