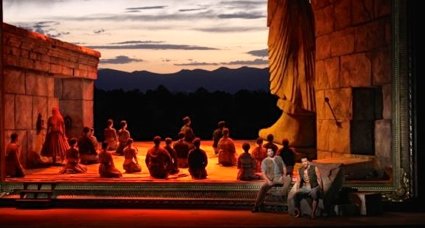 The Santa Fe Opera, over the past three festival seasons, has added three important 19th century French operas that it had never before produced in its 55 year history to its performance repertory. 2010 saw the company premiere of Offenbach’s “Tales of Hoffman”, 2011 of Gounod’s “Faust” and 2012 of Bizet’s “Les Pecheurs de Perles [The Pearl Fishers]”.

Each were given credible new productions, each taking the work seriously, by major stage directors and set designers.

The Orientalism is reflected in the ceremonial garb of the Hindu priestess, but large numbers of the villagers have adopted Western dress for everyday wear.

[Below: the hunter Nadir (Eric Cutler, center, in blue-grey coat) has returned to his village after a long absence; edited image, based on a Ken Howard photograph, courtesy of the Santa Fe Opera.] 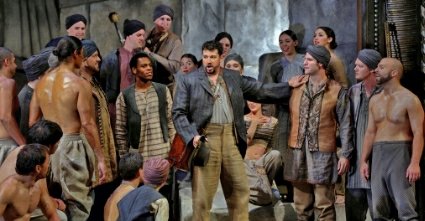 Bizet’s early opera has been enjoying a Renaissance over the past decade, and has achieved a greater popularity with modern audiences than it has ever enjoyed before, certainly due to its reliance on the “sweet melody” that abounds in the works of Gounod, Bizet, Delibes and other Parisian opera composers.

There are excellent singers internationally for each of the three principal roles, and, as operas go, it’s less of a budget-breaker than many other operas in the standard repertory.

But Blakeley makes a strong case for the dramatic integrity of the work as well. He adds some extra-textual features – the preparation of a body (the leader that Zurga will replace) for its funeral ceremony, and a tableau in which Leila and the worshipers at her temple appear in the background as Nadir and Zurga sing the famous duet, Au fond du temple sainte.

[Below: Nadir (Eric Cutler, center left) and Zurga (Christopher Magiera, center right) both remember the vision of a priestess; edited image, based on a Ken Howard photograph, courtesy of the Santa Fe Opera.] 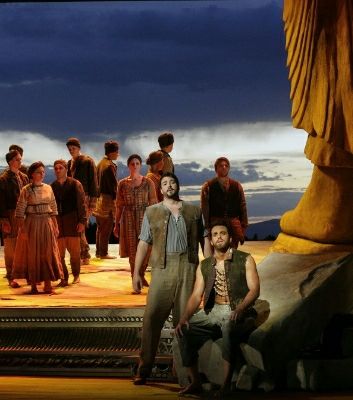 One of Blakeley’s ideas was to portray the importance of the villager’s belief that divine intercession will keep them safe from the many dangers that pearlfishers and seafarers face (from typhoons to tsunamis). At different points in the opera he enlists thunder and monsoon type rain to emphasize the environmental terrors.

Here the New Mexico environment added its own theatrical effects to Blakeley’s concept. Throughout the performance, one could see lightning strikes hitting the distant Sangre de Cristo Mountains visible from the back of the stage that opens to the elements.

[Below: the priestess Leila (Nicole Cabell (back left, dressed in red) steps off a boat; New Mexico’s Sangre de Cristo mountains are seen through the stage in the background; edited image, based on a Ken Howard photograph, courtesy of the Santa Fe Opera.] 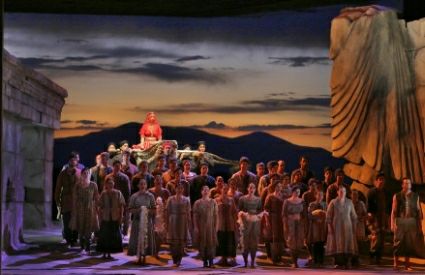 The main reason for artists to perform and audiences to attend “Pearl Fishers” is not to gain insight into rural Sri Lankan societies in past centuries, but for the singing. Here Santa Fe Opera brought in two of the most important contemporary singers of this opera, Eric Cutler as Nadir  and Nicole Cabell as Leila.

Cutler not only has one of the most beautiful lyric tenor voices of our day, but he has studied and perfected an authentic French style of singing. A highpoint of any “Pearl Fishers” performance should be Nadir’s sublime soliloquy Je croix entendre encore and, with Cutler singing it, it was.

[Below: Nadir (Eric Cutler, center) has been apprehended by the villagers for an act of desecration; edited image, based on a Ken Howard photograph, courtesy of the Santa Fe Opera.] 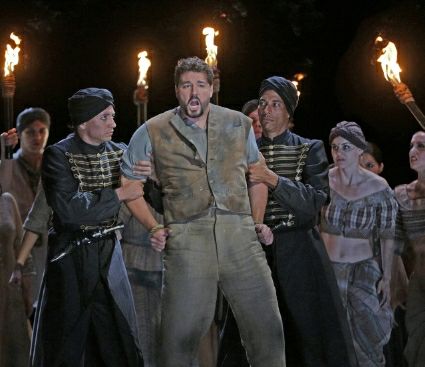 Cabell showed mastery of the mixture of lyrical and coloratura elements that infuse the music sung by Leila, so typical of mid-19th century French soprano roles. Her great aria Comme autrefois was executed beautifully.

[Below: Nicole Cabell as Leila; edited image, based on a Ken Howard photograph, courtesy of the Santa Fe Opera.] 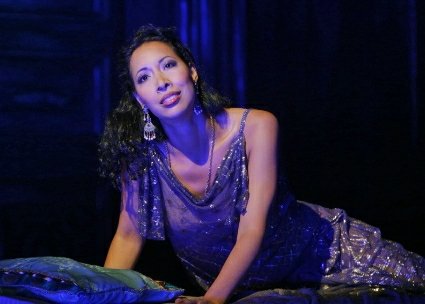 Also worthy of mention is the basso, Wayne Tigges, who has become an invaluable contribution to the Santa Fe Opera festival casts, whether in a principal or comprimario role. Here he played the high priest Nourabad, who discovers the forbidden relationship between Leila and Nadir.

[Below: Nourabad (Wayne Tigges left) will insist that Leila (Nicole Cabell, right) be sentenced to death for her transgressions; edited image, based on a Ken Howard photograph, courtesy of the Santa Fe Opera.] 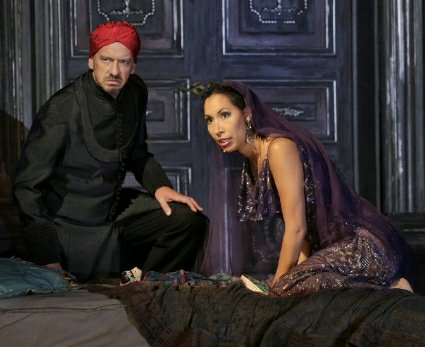 I had not seen and heard Christopher Magiera in performance previously, and am undecided as to whether his muscular, lyric baritone  is a good fit with the stellar voices of Cabell and Cutler.

There was almost a three week interval between the third performance and this the fourth performance in the series, and the vocal insecurity that was in evidence in the first half of the performance might have multiple explanations, but he rallied strong for Zurga’s big aria that begins with L’orage c’est calme.

[Below: Zurga (Christopher Magiera, center) is caressed by Leila (Nicole Cabell, right); edited image, based on a Ken Howard photograph, courtesy of the Santa Fe Opera.] 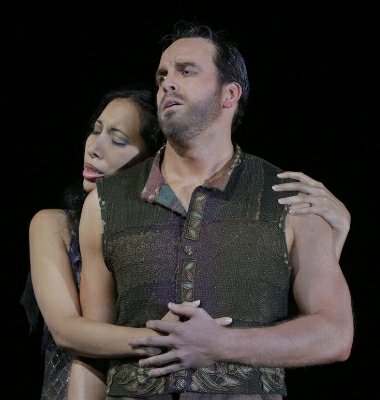 In 2013, the Santa Fe Opera’s French offering will be an Offenbach comedy, “The Grand Duchess of Gerolstein”, which has been presented at four of the Santa Fe Festivals in the 1970s.

However, there still are numerous French works that have never been performed in Santa Fe, including such standards as Gounod’s “Romeo et Juliette”,  Massenet’s “Manon” and “Werther” and Saint-Saens’ “Samson et Dalila” and many less often performed masterworks such as  Delibes “Lakme” and Thomas’ “Hamlet”.

The successful run of three new productions of classic French Romantic operas in consecutive seasons suggests that Santa Fe Festival has become an important center for the current, welcome, re-evaluation of the Romantic French operatic repertory.

I recommend the Santa Fe Opera’s “The Pearl Fishers”, because of the new production, the  insightful direction of Lee Blakeley, and especially for the inspired singing of Eric Cutler and Nicole Cabell. Emmanuel Villaume (from Strasbourg, France) is the conductor.