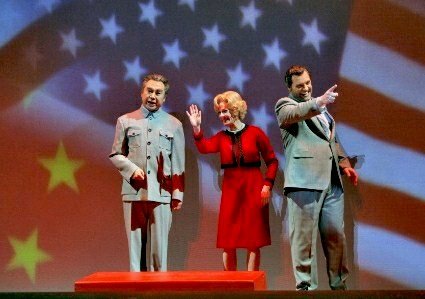 My original assessment had been that Michael Cavanagh’s production (originally performed at the Vancouver Opera) being presented is an extraordinary presentation of an important musical work, and that Brian Mulligan’s Nixon was a brilliantly sung, superbly conceived portrayal, which stood out, even in the presence of a praiseworthy cast.

[Below: President Nixon (Brian Mulligan, at top of podium) toasts those assembled at Chou En-Lai’s banquet; edited image, based on a Cory Weaver photograph, courtesy of the San Francisco Opera.] 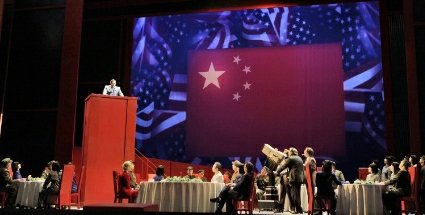 In my review, I suggested that it was my intention to review the production, and not the opera itself. My impresion is that the community of reviewers were impressed, but that not a small number of the company’s patrons might have concurred with the spirit of Donal Henahan’s 1987 review of the Houston world premiere for the New York Times that the “. . . production turned out to be a Peter Sellars variety show, worth a few giggles but hardly a strong candidate for the standard repertory.”

Of course, much of the San Francisco Opera audience never thought of Sellars at all, and some will not even have heard of him. Those who knew nothing about the opera prior to entering the War Memorial Opera House would learn of Sellars’ role in the creative process only through Thomas May’s essay on the opera that appears in the program.

Yet that program’s best read page – that lists the cast and creative team – appropriately credits the composer and librettist; then lists the stage director (Michael Cavanagh for the new Vancouver Opera production); the various designers of the sets, costumes, lighting, projections, sound, wigs and makeup; the choreographers, the stage managers, the costume supervisors, the production super captain and the prompter.

But the cast and creative team page lists no position for Sellars – the person who, we are taught, conceived the opera in the first place, and who convinced John Adams that he should compose an opera and Alice Goodman that she should write a libretto. (I suppose in Hollywood Sellars would be listed as an “executive producer”, but that probably would imply a salary.) 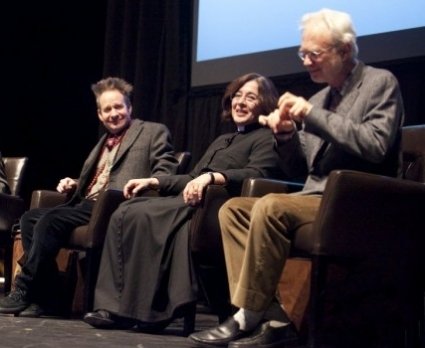 In that original review of the opera’s first night in Houston, Henahan found parallels between the opera and, to quote him,  ” . . .”The Mother of Us All’, the Virgil Thomson-Gertrude Stein masterpiece that also fondly reflects a moment in American history as if in a funhouse mirror.”

Of course, the musical styles of Thomson and Adams are as unalike as, say Rossini and Wagner, but it might have been, in the first fleeting thoughts of the creative team, to speculate what these three American and three Chinese historical figures might look like in a “funhouse mirror”.

I believe Henahan’s reaction remains worthy of analysis, since it is at heart of the confusion that some have about this opera. He, and many other critics likely expected “Nixon in China” to be Pop Art, the operatic equivalent of an Andy Warhol painting of a can of soup. “The Mother of Us All” with its jumble of famous American historical personalities from different generations and centuries interacting in absurd fantasies dreamed up by Stein and Thomson was the heritage that many critics expected “Nixon” to have.

But I suspect also that Alice Goodman, who so carefully researched each of the historical personalities, had come to understand that creating an extensive Saturday Night Live skit set to contemporary operatic music, was not what their team should pursue. As the opera’s libretto was constructed, each character’s public statements were interspersed with private thoughts that were based, not on what Comedians Rich Little or Jon Lovitz might suggest, but on an emerging understanding of how the Maos, the Nixons and Chou En-Lai might each one have perceived the events that were taking place.

Kissinger in a Funhouse Mirror?

Perhaps “Nixon in China’s” characterization of Kissinger – who is made to look so ridiculous while the other characters seem to have an innate dignity – is a residual “funhouse mirror” conceptualization, although I’m prone to regard is as more likely a Harvard in-joke between Harvard alums Adams, Goodman and Sellars about Harvard Professor Kissinger. 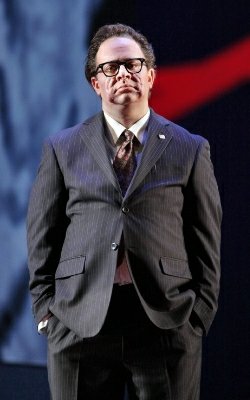 That the Secretary of State had a tabloid reputation for partying with women is well-known, whether or not it’s true. But the credible testimony of Swedish actresses and New York models suggests that sophisticated women found him attractive or at least enjoyable to be with. Thus, I believe that were Kissinger’s womanizing played in the opera as suave and cool, like Sean Connery’s James Bond in “From Russia With Love” rather than boorish and creepy like Jim Carrey’s Harry Christmas in “Dumb and Dumber”, it would be a characterization likely a bit closer to “reality”.

More to the point, a more even-handed portrayal of Kissinger (the dislikable characterization of the Secretary by the usually excellent Patrick Carfizzi is surely not his fault) would fit with the (at least occasionally) rather sympathetic portrayals of the other five characters. (A rationalization of the treatment of Kissinger as, say, Madame Mao’s dream does nothing to explain the discrepancy in treatment of the characters and in actual performance is too obscure a premise not to confuse members of the audience). 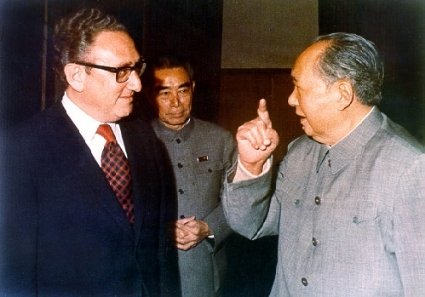 It’s clear from various conversations of record between Sellars, Goodman and Adams that their resistance to the pleas of colleagues that they keep the opera at the level of parody, especially of Nixon, led to a substantive work as the final product, the power of which was as unexpected to the opera’s creators as was the opera’s startling longer-term success.

That power comes from treating individuals and groups – all of whom might be diametrically at odds with the ethos of the Harvard campus – as persons who at that point in time regard themselves as decent human beings trying to do good. It doesn’t matter what happens next to Nixon, or Madame Mao, or Chou En-Lai or to the Maoist Red Guards. Watergate and the Cultural Revolution, and Tiannaman Square are not what “Nixon in China” is about.

The opera audience is invited to be mesmerized with the San Francisco Opera Chorus dressed as Red Guards chanting Maoist principals: “Your master is the laborer/Who rules the world with truth and grace” “Follow the orders of the poor” “Roll up the straw matting after use”.

The thought processes of Mao are striking: He reminds Nixon that both of the cold warriors were at one point allies of Chiang Kai-Shek. Mao was certain that Chiang would not approve of the two of them meeting. Mao likes Nixon’s book Six Crises and “right-wingers” in general, but not General De Gaulle.

That success achieved by the creative team, I believe, has reached a new level with Cavanaugh’s Vancouver production. I have remarked on the absorbing projections that create an overpowering sense of being present during the flight and especially the landing of Air Force One. But the production’s strength is not just its engaging theatricality, which includes a dazzling, frantic finale to the scene of the banquet and toasts (although in future stagings of this production, I would eliminate dancing the twist. There must be a dance just as wild that diplomatic parties actually might have done in the seventies).

What is also so impressive about the opera are the insights and empathy it gives one into the five “serious” (i.e., not described by Sellars as buffo as he does Kissinger) characters in the opera, through the device of seemingly plausible, intimate conversations between the Maos and between the Nixons, as well as the introspections of Chou En-Lai. 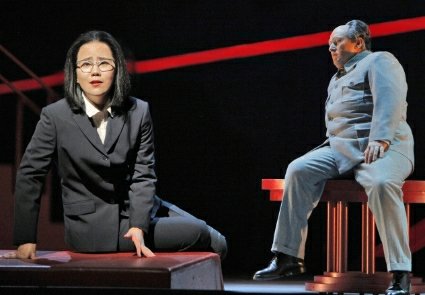 And, of course, a recurring and obvious theme of the opera is the recognition that one’s public persona differs from one’s private life. Nixon and Chou are fully aware of where any television cameras might be operating. The two of them can be in a conversation with Mrs Nixon, in which all three will sense the arrival of crowds to whom they must wave, regardless of whether their private conversations had been completed.

My colleague Tom Rubbert in the first part of this two part “Second Look” at San Francisco Opera’s “Nixon” production [See A Second Look: “Nixon in China” in San Francisco – June 17, 2012, part 1], in the emphatic style of writing he adopts (often ending a sentence with three exclamation points!!!) had selected four operas he believed were the great American operas to date: George Gershwin’s “Porgy and Bess”, Adams’ “Nixon in China”, Glass’ “Appomattox” and Heggie’s “Moby Dick”. 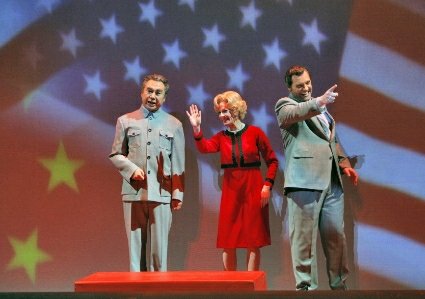 I have great esteem for all four of these works, even though I’m not sure that “Appomattox” has yet developed a sufficient fanbase – especially a fanbase that contains the opera company general directors and others who determine what individual opera companies might mount.

If one looks at the list of the performances of any of these announced at a point in time as being scheduled anywhere in the world, “Porgy” as of this date has only two performances scheduled, “Nixon” and “Moby Dick” one each, but none for Glass’ Documenatary Opera.

For my personal list, I would add Carlisle Floyd’s “Susannah”, but only one mounting of that work is presently scheduled worldwide (in Boise, Idaho in May, 2013). However, I have it on the highest authority that “Susannah” will be mounted by the San Francisco Opera in an upcoming season.

I don’t think “Nixon” will ever contend for the “standard repertory” – at least as I define it as the most popular operas composed during a 140 year period beginning with Mozart’s “Le Nozze di Figaro” and ending, at least for the time being, with Puccini’s “Turandot”.

However, I do see it as continuing as an opera performed with some frequency, such as Debussy’s “Pelleas et Melisande” or Britten’s “Billy Budd” and “Peter Grimes” and “Midsummer Night’s Dream”. whose future is always enhanced and made a bit more secure when an attractive production, such as this one of “Nixon in China”, is created.

Each of these works will impress much of the audience on first hearing, but for many opera goers this group of operas might require repeated performances and a bit of preparation to appreciate them fully.