Wm: Although I work with the press offices of all of the opera companies whose performances I review, and in the arrangement of interviews with particular artists, I have never posted an interview with an opera company press officer. As part of my occasional series on opera festivals, which includes reports on the Santa Fe and Glimmerglass Festivals, I thought I would interview a press officer who has been associated for many years with the Santa Fe Opera Company and their annual festivals. The following interview with Joyce Idema took place at the Cantina at the Santa Fe Opera ranch. 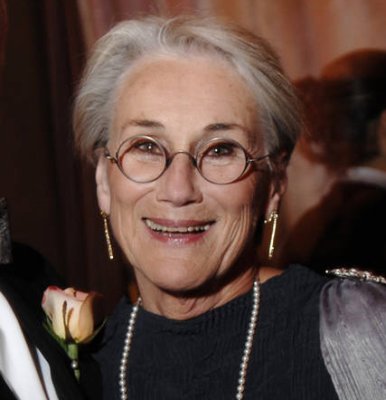 Wm: You have experience working with performing arts organizations (including the Chicago Symphony Orchestra) in different parts of the country. What are the features of Santa Fe Opera that you would regard as unique to this organization?

JI: I was thinking about that question as I drove over here for the interview. What is unique about the Santa Fe Opera is that it was established by one man, John Crosby, who had a very clear vision of what an American opera company should be. Not only did John Crosby audaciously decide to start an opera company, but he chose a rather remote spot in country he loved – that being  Santa Fe, New Mexico.

[Below: Conductor John Crosby, founder of the Santa Fe Opera; edited image, based on an historical photograph, from the santafenewmexican.com.] 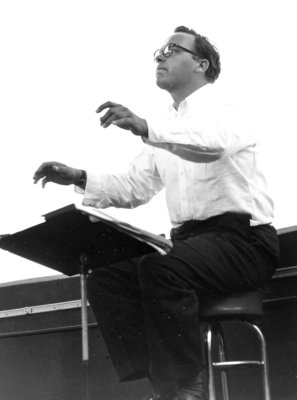 JI: Mr. Crosby wanted an opera company that would give American singers an opportunity to learn repertoire and sing major roles in their own country without having to go to Europe, which was a path that many had to take in the 50s to get the experience they wanted.

Mr. Crosby wanted to give young singers emerging from conservatories and music schools the opportunity to work and learn from seasoned singers.  This idea led to the Apprentice Program for Singers, the first in the country, and one that has been much emulated.  Apprentice singers form the choruses needed for the mainstage productions.  They also have voice lessons, coaching sessions, master classes, all designed to help prepare them for professional careers.  In some cases they perform small roles and serve as covers for principal artists.

Mr. Crosby envisioned an ensemble company, meaning that artists would be here as long as their operas ran. So, for the 2011 season performances of Gounod’s “Faust” and Puccini’s “La Boheme”, the artists are here for three months.  Those who are cast only in Berg’s “Wozzeck” with just five performances are here for a shorter period.

Wm: It’s remarkable that these principles remain in evidence five and a half decades after the company’s founding.

JI: I feel that the Santa Fe Opera is unique among arts organizations in that Crosby’s ideas remain intact. The reasons that led Mr. Crosby to initiate his operatic innovations remain relevant.

Wm: The Santa Fe Opera is remarkable for its fiscal solvency.

JI: It has always been the Company’s philosophy that it would do what it could pay for and that still holds true.

Wm: John Crosby ran the company for fifty years. What do believe, besides establishing the guiding principles for the company, is his legacy.

JI: Mr. Crosby was not only a musical visionary, it was he who chose the site where the Company still performs. The current theater is the third since the first, in 1957, and in the exact same place.   In 1957 the location was described as being “in the middle of nowhere”. It still is!

It was an act of genius. Opera lovers still have to fly to Albuquerque, drive to Santa Fe, and drive again five miles to reach the theater!

You have to admit that there is no opera house with a setting quite like this, with a view of two mountain ranges, a vast mesa, breathtaking sunsets, thunderstorms, rainbows and starry nights.

Not only was John Crosby director for 50 years, his successors were both trained by him. The first, Richard Gaddes, who joined the Company in 1969, became General Director in 2000.  His successor, the current director, Charles MacKay has held the post since 2008.  Mr. MacKay saw his first opera here when he attended Youth Night. 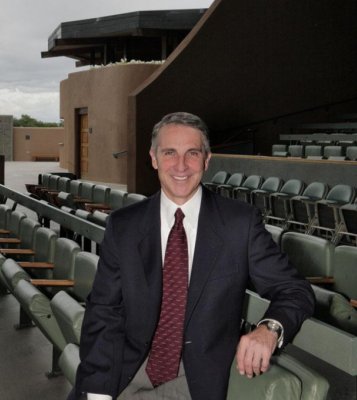 Wm: Over the past three seasons, I’ve interviewed a dozen artists while they were performing here, all of whom remark that the Santa Fe Opera is unlike anything else they experience.

JI: Yes, there is a sense of family among the artists here. I know it’s a corny word, but many who perform here become friends. They exchange information about singing and repertory, and look forward to returning.

Wm: Santa Fe Opera has been famous for its dedication to new works, including commissions for new works with American artists in leading roles such as Morevac’s “The Letter” for Patricia Racette, and upcoming commissions for David Daniels and for Nathan Gunn.

JI: The emphasis on new works is another of those principles on which this opera company was founded.  There have been a dozen world premieres and commissions, and many American premieres as well.

[Below: John Crosby (left) joins Composer Tobias Picker (right) at the 1996 premiere of Picker’s “Emmeline”; edited image, based on an historical photograph, courtesy of the Santa Fe Opera.] 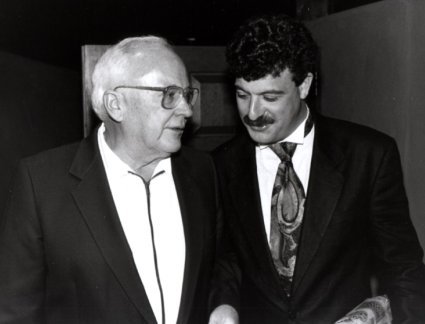 Wm: What are some of the other features that make the Santa Fe Opera Festivals so unique?

JI: I think the interaction between the  City of Santa Fe and this Company is very special. I recently spoke to a reporter who had been horseback riding and learned that the riding instructor plays one of the security guards in Vivaldi’s “Griselda” this summer. Then they went to other places in town, where people mention that they’ve been in an opera or “my brother/sister works there.”

In the summer there are nearly 700 employees and many of them come from Santa Fe and the surrounding area.  It’s easy to get attached to this place.

Santa Fe residents and those traveling here know that they can hear operas and see productions they won’t get elsewhere. They look forward to the gorgeous and a lovely, informal dinner in the Dapples Pavilion before the opera and hear an informative 20 minute lecture by the popular opera expert, Desiree Mays.  It’s a wonderful experience.

[Below: a pre-opera dinner is held at the Dapples Pavilion on the grounds of the Santa Fe Opera; edited image, based on a photograph, from santafetravelers.com] 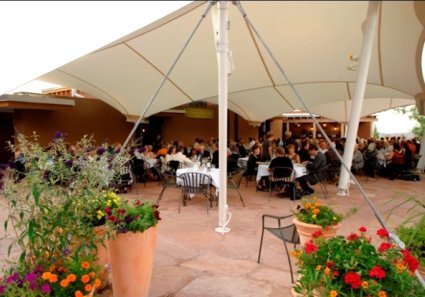 Or, alternatively, ticket holders can attend the “prelude” talks at Stieren Hall, where  lecturers provide a preview of the evening’s opera.

Opera Titles is another way to make opera goers more comfortable. Translations in either English or Spanish appear on the back of every seat.

Wm: I personally find it enjoyable to dress up in black tie on the season’s opening night, which seems to be quite an important annual event in Santa Fe. But many of the Santa Fe Opera regulars have developed long time traditions before performances, have they not?

JI: Many patrons enjoy tailgating  in our parking lot before each performance. But on opening night, it becomes a major social event. The parking lot opens at at five to permit elegant tables to be be set with wineglasses, silver service and gourmet dinners, or more simply with picnic baskets.

[Below: a group of Santa Fe Opera Festival attendees set up a gourmet dinner in the parking lot, prior to the season’s opening night; edited image, based on a photograph from innatthealameda.com.] 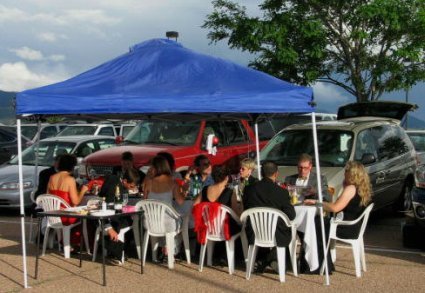 Another Santa Fe Opera opening night tradition for many patrons is to wear costumes themed to opera they are attending. Many women wore kimonos for Puccini’s “Madame Butterfly”. This year some of the men attending Gounod’s “Faust” were wearing top hats (with and without horns). Then at 8 p. m. the theater patio is opened and everyone is and invited  to have champagne. Opening nights  are popular, even legendary events.

Wm: As the festival’s press officer, you’ve have seen first hand the change in the media over the past decade.

JI: My title is press and public relations director.  My job is to make sure that what  the press/media receives is accurate and reflects the image of The Santa Fe Opera.

There are fewer newspapers now and fewer critics that have budgets to travel. The reputation of the Company and the productions we do are still compelling as ever before and critics are still coming. You know I’ve been in this business forever! and I have friendships with critics from everywhere.

Wm: Yet more of the classical music press is moving to the Internet.

JI: I think the first reaction among many among opera company press officers was one of suspicion. But websites grew in popularity, some with a few hundred readers, some with very large readerships. There are now many good websites for opera and classical music. It’s really important for us to keep track of them and to see that have information on what we are doing that would be relevant to them gets to them.

Wm: I suspect that’s a challenging task for a press officer.

JI: It used to be that a press officer had a stack of newspapers to thumb through and look for the reviews. One of my jobs is to to keep up with new websites, new publications,  telling them our story.  That’s only one of my challenges.  Social media is also important.

JI: Everybody is in the same boat as far as the social media sites are concerned. The challenge always is to find ways to attract new readers, and potentially new opera goers.  It’s never dull in the press office.

Wm: Thank you, Joyce.
JI: Thank you so much for coming to Santa Fe.  I enjoyed our conversation.