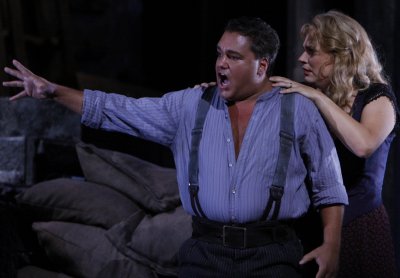 [Note from William: Tenor Salvatore Licitra died September 5, 2011 from injuries sustained in a motorcycle accident near Ragusa, Sicily on August 27, 2011. In his memory, I am re-posting the interview I conducted with him in November 2009 in Chicago, with hyperlinks to my reviews (with production photographs) of four of his recent performances. These I offer as a tribute to his career and as evidence of how important he was to the world of opera performance .]

[Below: a portrait of Salvatore Licitra; edited image, based on a photograph, courtesy of the Los Angeles Opera.] 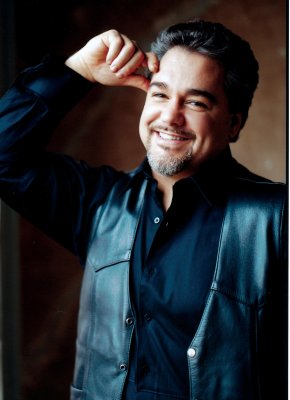 SL: It is  difficult to convince people in our times to believe in this era when one’s personal honor and reputation meant everything. Today, no one cares about one’s “honor” in the way the characters in “Ernani” do.

I think it is important to renew opera. When we perform opera whose music is composed by Verdi, we are performing something special. “Ernani” may seem to have an impossible, stupid story. Of course, you can find stupid stories everywhere, such as in soap operas, but the music in “Ernani” is the message, not the story. “Ernani’s” music is seductive, and we have to think about why we are seduced by its music. Verdi creates emotion by the music. We must remind ourselves that we have a treasure, but that each time it is done we can see that treasure in a different way.

Wm: Obviously, you believe the opportunity to be “seduced by Verdi’s music” is what makes these operas relevant to contemporary audiences?

SL: In this modern world, everyone needs a break from reality.  Music can make the world better. I am very happy to be part of it.

Wm: How do you find the experience of performing “Ernani” with the Lyric Opera?

SL: This is my second time in Chicago. This theater is amazing. It is a good team. Everything is organized, making it very easy for an artist to come into this city and perform.

Wm: Obviously, you have a voice that fits the traditional repertory of the “Italian tenor”, able to sing the big roles of Verdi’s and Puccini’s operas, yet these roles often are performed with tenors with much lighter voices. How would you describe your voice, and how important is it to have a voice like yours for these Italian roles?

SL: I was born with the right kind of voice to sing Verdi’s tenor roles, such as Riccardo in “Ballo in Maschera”, Manrico in “Il Trovatore” and Radames in “Aida” and the lyric and dramatic verismo roles including Turridu in Mascagni’s “Cavalleria Rusticana”, Canio in Leoncavallo’s “I Pagliacci” and the title role in Giordano’s “Andrea Chenier”.

These roles really require a voice with a dark sound throughout a wide range and the ability to sing a high “C”. This type of tenor voice was considered something special and you did not do those operas without voices capable of singing those roles.

[Below: Salvatore Licitra, third from the left, is Riccardo in Verdi’s “Un Ballo in Maschera” at his 1998 operatic debut in Parma; each of the opera’s roles were sung by students of the famous tenor, Carlo Bergonzi, who appears fourth from the left; edited image, based on a photograph, courtesy of Salvatore Licitra.] 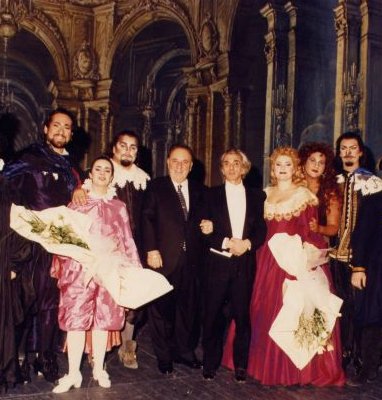 Unfortunately, you have people in this field who do not know anything about voices and the composer’s intentions. Too many times one will encounter performances, in which the title role of Verdi’s “Otello” or Manrico or Canio is cast with a tenor with a very light voice – sometimes a voice that that is amplified to compensate for its light weight.

In the past, companies could not get away with this practice, because the opera public knew what kind of voice to expect. For example, my grandmother in Italy was completely competent in her knowledge of what type of voice suited which role. People who went to a theater to see Verdi’s “Aida” knew what kind of voice to expect and knew they were being cheated if a light-voiced tenor was cast as Radames.

Wm: Is it your belief that the Italians after your grandmother’s generation do not have the knowledge of opera their predecessors did?

SL: Yes. It upsets me, as an Italian, that we have a generation of Italians of whom so few understand opera and of whom so many do not care about opera at all. Some young Italians cannot even name an Italian opera composer. It is our fault as Italians if we lose this part of our culture.

Wm: As an international star, sought after by the world’s great opera companies, you have a certain amount of power to impose your will on stage directors and opera managements. What are your thoughts about opera singers who display a lot of temperament?

SL: In opera, there are large numbers of artists who are creating something. For the creation to be of high quality, we have to all be part of an ensemble that is respectful of the other artists. Unless we share the common goal of producing a great of work of art, faithful to the composer’s intentions, it will not work well.

These are times when the performing arts are in a deep crisis. Almost all theaters have had a bad season economically.

In my experience, some artists are too difficult. It is just not necessary to play the diva or divo. Artists should be grateful that they have the opportunity to display their skills. I give thanks to God to be a part of this field. I try to relate to everyone. Each artist has something personal that can give you a different idea about a role. It is always possible, even for an artist who has achieved recognition for their work, to discover something new.

Wm: You will be adding several roles to your repertory over the next few months, including Calaf in Puccini’s “Turandot” at the Metropolitan early in 2010. How do you go about preparing for a new role?

SL: I spend hours on a score, always seeking to improve my technique, but also trying different ideas as how to make a small change in sentiment or style. Each time I start a role, particularly one of Puccini’s, my first impression is that I do not like the work. I first learned Pinkerton in Puccini’s “Madama Butterfly”. I didn’t like it. It seems to be just dissonance. But then, as I work on the role, wow! It starts to grow on me. Then I worked on Cavaradossi in Puccini’s “Tosca”. Day by day there was something more to find. Puccini, who personally experienced great passion and great sorrow, was a master at expressing both in his music. He wrote “Butterfly” at a time of deep regret for the suicide of  girl who had  been involved with him romantically.

Then I learned Luigi in Puccini’s “Il Tabarro”. It first seemed to me as a “cut and paste” from “Butterfly” or Puccini’s “La Boheme”. But then I got into it and discovered it was a new work, with its own magic. When I work on these operas, it is like each is a little rose bush without any flowers, then in time, a rose blooms.

[Below: Salvatore Licitra as Luigi, pursuing a dangerous illicit love affair with Giorgetta (Anja Kampe) that is ignored by Il Tinca (Matthew O’Neill, in background); edited image, based on a Robert Millard photograph, courtesy of the Los Angeles Opera.] 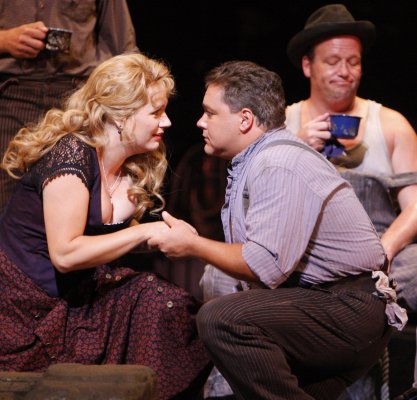 Wm: In June, 2010, you will be performing Dick Johnson in Puccini’s “Fanciulla del West”  in San Francisco (for the opera’s 100th anniversary in a city itself created by the Gold Rush in which the opera is set). What are your thoughts about that role?

SL: I approached “Fanciulla” exactly the same way. Page by page, you discover the passion in it. Dick Johnson, who is an outlaw, has found himself to be a changed man through his love of Minnie. After his duet with Minnie, he finds he cares for her more than anything. In the sad situation, when he is about to be hung, he sings Ch’ella mi creda libero, in which he wishes something better for himself and for her.

After my performances in San Francisco, I will prepare to add des Grieux in Puccini’s “Manon Lescaut”, in which there is exactly the same feeling.

Wm: Do you approach operas by Verdi and Puccini differently?

Starting from the bel canto line, one can use different performance styles to display different emotions and even to differentiate the characters. By following what is indicated in the scores, you can use the color of the scene to form your character. When I make my debut at the Met as Calaf, I intend to make him seem to fit his Chinese surroundings. When you close your eyes you can imagine you are in China. That’s the beauty of opera.

My Dick Johnson in San Francisco will have an American feel. My Cavaradossi will seem the Romano, and you will hear the bells of Rome.

Wm: You were born in Bern in the German part of Switzerland, and did not move to Italy until you were two years old. How did your family come to be in Switzerland?

SL: My father was looking for a job, and, in fact, stayed there ten years. But when I was born, he decided to move the family to Milan so that I be raised as an Italian. Milan is where I grew up.

Wm: Who are some of the artists who have influenced your career?

SL: Conductor Riccardo Muti was very encouraging to me at a time when many in Italy were saying “Licitra will not last three months” or later “he will not last two years”. 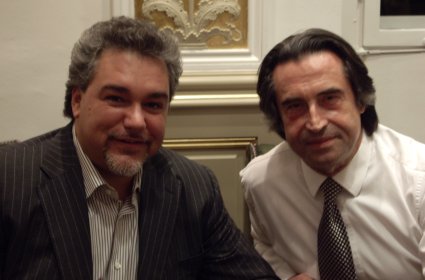 The great tenor Carlo Bergonzi, who was one of my teachers, said to me “Do not pretend to be another voice. Everyone has to be unique. If you push your voice in ways that it is not prepared for, you will not last. If you follow your instinct as what your voice is able to do, and respect your vocal chords, you will last.” I am still here. 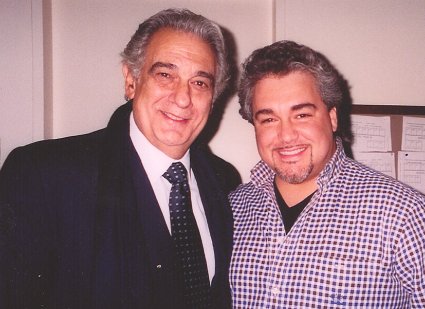 Placido Domingo is one of my favorite artists, but is also one of my favorite persons. Each time we have a chance to talk, he talks to me like he is a real person, not a superstar. When he talks to me, it is like we are sharing something as one human being to another. And, of course, I would like to be able to sing like he does, so many years into a career. I plan to return to the Los Angeles Opera to repeat Luigi and also to sing Radames.

Wm: Thank you for spending this hour with me.

The facilitation of this interview by the Lyric Opera of Chicago was deeply appreciated.