[William – This is the second part of an interview with bass-baritone John Relyea, most of which took place at the War Memorial Opera House in San Francisco in June, 2010. For the first part, see: Rising Stars: An Interview With John Relyea, Part 1.]

Wm: Recently, you have become associated with the “villain” roles, such as Nick Shadow in Stravinsky’s “Rake’s Progress”, but especially those in 19th century French opera – Mephistopheles in Berlioz’ “Damnation of Faust” and Gounod’s “Faust” and the four roles in Offenbach’s “Tales of Hoffman”.  We seem to be at the beginning of a resurgence of interest in French opera, particularly those with fantastic elements like these roles. Do you feel a rapport with these “devil” roles, and do you agree that the popularity of these operas is on the increase?

JR: The number of performances of Berlioz’ “Damnation” as an opera has been increasing, and I am scheduled to sing in Meyerbeer’s “Robert le Diable” at Covent Garden in a couple of years. I think there is a good reason for a lot of the popularity of the French works. They do need a little bit of cutting and editing. There is so much ballet in them that gets put aside, because these operas were so popular when operatic ballet was at the height of fashion. The operas, however, are well worth  bringing back.

[Below: John Relyea as the Villain Coppelius in Offenbach’s “Tales of Hoffmann”; edited image, based on a Rozarii Lynch photograph, courtesy of the Seattle Opera.] 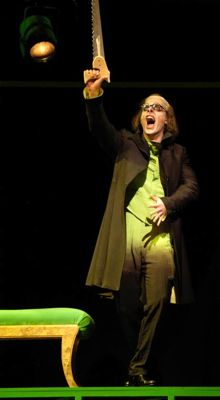 I think several of Berlioz’ operas are particularly interesting. His “Benvenuto Cellini” a chaotic piece, just as Berlioz was a chaotic composer. He had these crazy tenor parts – very lyrical, but dramatic as well. There are not a lot of tenors that do justice to these roles. A lot of these pieces come in and out of popularity depending on the availability of singers.

They evil villain roles are universally popular. Mephistopheles in opera is the source of humor and sarcasm. People like to hate him. But if you are planning to present “Robert le Diable”, it needs a lot of cutting down.

Wm:  “Damnation of Faust” has bedeviled most stage directors and production designers, but I believe that Stephen Langridge made it work, in the production for Lyric Opera in Chicago in which you starred. What are your thoughts on Langridge’s particular ideas for performing the work, and do you see “Damnation” as an opera rather than an oratorio?

JR: I did the piece three times in a concert version when I first starting doing it, at a time that it was just beginning to gain popularity. I think it can totally work as an opera. The transitions are so fast, but a Berlioz work can take these changes of mood.

It is really tricky to develop the relationships between the characters. For instance, what is the relationship between Faust and Mephistopheles?  You can take that whole first scene with Faust in his study, where a director has the first chance to do this as a montage of science versus religion. That scene is so important in “Damnation”. There is no signing of a contract in the first scene.

Wm: In the Berlioz version, Mephistopheles doesn’t offer Faust a contract to serve him on Earth in exchange for Faust’s service in Hell until Faust has determined that he wants to sacrifice himself to save Marguerite from the police authorities who will try her for murder.

[Below: Mephistopheles (John Relyea, left) offers his services to Faust (Paul Groves) in Stephen Langridge’s production of Berlioz’ “Damnation of Faust”; edited image, based on a Dan Rest photograph, courtesy of the Lyric Opera, Chicago.] 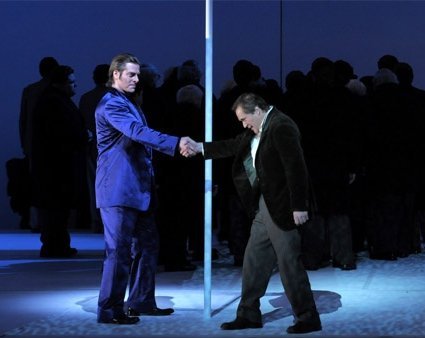 JR: Yes, and Langridge has created abstract visuals for your mind to encompass the surrealism of the piece. He created this funny kind of military and police presence which doesn’t have a direct relationship to the characters, and yet creates a time and space for the characters in which they all can exist. This gives the mind a chance to relate one scene to the next. It worked!

Wm:  Was Massenet’s “Don Quichotte (Don Quixote)” a role that you had planned to do before Seattle Opera invited you to sing it there in February 2011?  What attracts you to the role?

JR: What attracts me is the character – Quixote himself and his delusions. The music in his death scene is incredible. This is what draws me to a lot of roles. I have to connect to the character. Speight Jenkins, the general director of the Seattle Opera, has been a huge proponent of my career. He gave me my first chance to sing Bluebead in Bartok’s “Bluebeard’s Castle” and the first opportunity to sing the four villain roles in Offenbach’s “Tales of Hoffmann”. Malgorzata Walewska, who sang the other major role in “Bluebeard’s Castle” will join me again as Dulcinee, with Linda Brovsky directing.

[Below: John Relyea and Malgorzata Walewska in Bartok’s “Bluebeard’s Castle” as conceptualized by Robert Lepage; edited image, based on a Rozarii Lynch photograph, courtesy of the Seattle Opera.] 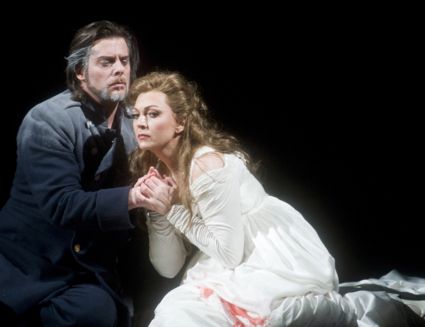 Wm: Now that you have reached your 40s, have you experienced changes in your voice?

JR: Yes, the early to mid 40s is when bass baritones will hit their vocal prime. This is the age that there will develop in the way they are going to be for the next 15 to 25 years.

I know that is how things developed for my dad. The 40s and 50s was when his voice was right. It is a slow development for the low voices. So much can happen in the 20s and 30s. It is not wise to pigeonhole yourself. The voice can be much higher in a couple of years. I was so aware of my father who started as a high baritone and actually thought he was moving into the tenor range, but in time it settled lower.

Wm: How do you see your repertory changing over the next several years. What roles do you want to sing, and which do you expect to leave behind?

JR: I will be moving into the Verdi roles, keeping the French and Italian Villain roles, but will be leaving Mozart and Rossini behind for a while. The voice wants to work on more pistons, singing things with longer lines, developing into that repertory. That will allow the freedom to grow. In you early years, you are told to keep away from Verdi and Wagner and stay with Mozart, Handel and Rossini.

[Below: Giorgio (John Relyea) and Riccardo (Mariusz Kwiecien) sing their great duet Suoni la tromba from Bellini’s “I Puritani”; edited image, based on a Rozarii Lynch photograph, courtesy of the Seattle Opera.] 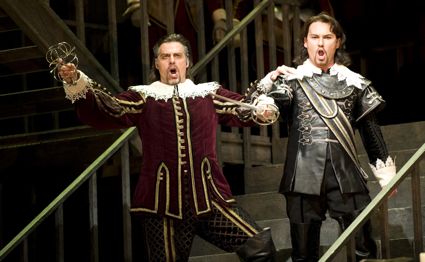 The voice I had when I started as an Adler Fellow at San Francisco Opera was different than it is now. I think I need to explore Verdi, and then the Wagner roles. However, I will be singing Leporello at the Met.

Wm: What will be your next new Verdi roles?

JR: I have the title role in Verdi’s “Attila” scheduled for the Seattle Opera in 2012. I will add Filippo in Verdi’s “Don Carlo”  to my performance repertory in 2014,

Wm:    You are singing King Marke in a concert version of “Tristan und Isolde” in London. Are you considering other Markes and other Wagner roles in the future? If so, which ones?

JR: I think Marke is a great way to go into Wagner – this is what Rene Pape did. I think I would start with the Wotan role in “Das Rheingold”. Much later I might try the Wotan role in “Die Walkuere”, although that is much harder for someone who is more in basso range. I will discover this over the next few years.

I am looking for Verdi next. It creates a nice backbone in phrasing, the line you get in singing Verdi for a number of years. Maybe the I can aspire to a beautiful approach to singing Wagner. He wanted his singers to emulate the beautiful singing one associates with Italian opera.

You look at the ways things work, once singers go into Wagner, it becomes what they do, but I would want to balance Wagner with Verdi. I think Marke is a very good role to work with for a while. Where would I go next? Gurnemanz in “Parsifal”, Heinrich in “Lohengrin”, the Wotan roles? There is a path that I will have to uncover.

Wm:  We have had a number of revivals of Donizetti operas over the past half century, but most of these have been revived for prima donnas, even though several Donizetti operas were especially designed for a primo uomo. You have done a concert version of one of the Donizetti operas, “Marino Faliero”. Do you agree that opera companies should explore more of his operas where the principal leading roles were written for men?

JR: “Marino” is an odd piece. Marino really didn’t get an aria, but the ensembles are great. Many of the Donizetti operas are plotwise hard to render, and don’t have the greatest stories. But I think there are ways to do them right. I would be happy to do a piece that I didn’t know. If there is the right way to do it at the right time, the piece will come back.

Wm: Previously, we discussed the fact that your voice teacher, Armen Boyajian, also taught Samuel Ramey, and you are beginning to take on roles which have been associated with Ramey – the Devil roles, Don Quichotte, soon Verdi’s “Attila”. Do you feel your future will be influenced by Ramey’s career path?

JR: Ramey brought a lot of repertory into visibility,  I had not been exposed to Boito’s “Mefistofele”. It is unbelievably satisfying role, but hard to do. Ramey was born to do that.

I wonder why a lot of these operas, especially those with major basso roles, get shelved. Maybe there’s not the right person to perform them.

Wm: Your return to the San Francisco Opera as the Gounod “Faust” Mephistopheles has been a great triumph for you. Can we expect you back in San Francisco again soon?

JR: I have a good relationship with San Francisco Opera General director David Gockley,  He understands where my voice is going. He gets it. There will be more to say on this at a later time.

Wm: How do you balance having a family and a career?

JR: That is a spot on question. You have to have not just one but two or three calendars. My strategy has been if I am in an opera production, I will do the first few weeks, then try to bring my family out. The biggest factor in why its works is that my wife totally understands the profession and what it requires. When she is at home, she dedicates herself to being a mother and understands the support that is required when I am not with them.

Your family has to know what you are getting into.  She understands the attention that the person in the public eye receives. Building up in yourself the strength that is needed for an operatic career, while still keeping things in perspective, is tough. Big egos as a defense mechanism can get in the way, but if you can retain who you are underneath it all, then it can work. She has always gotten it and provides me with tremendous support. She has been there for me when I have needed her. I know it’s more of the challenge for a single opera singer.

Having in my background the experience of growing up in a musical family, with my father away a lot performing, and she being a teacher, I can see how both of my parents made their marriage work. It’s not very common, but theirs was a very happy marriage.