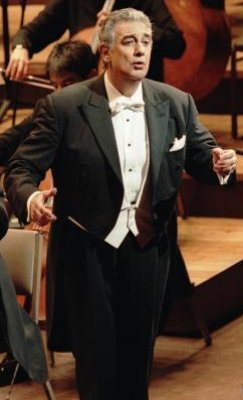 On September 23 2010, Placido Domingo, Los Angeles Opera’s general director, created the role of Chilean Nobel prizewinner Pablo Neruda in the world premiere of Catan’s “Il Postino”, that opened the Los Angeles Opera 2010-2011 season. In yet another example of his physical endurance, he began a series of Los Angeles Opera performances that alternated between singing the role of Neruda and conducting Mozart’s “Marriage of Figaro” – while simultaneously holding the  full time job of being  LA Opera’s bossman.  (And, those in the front row seats will confirm that he often appears wearing a Rolex Watch, a sponsoring partner of LA Opera!)

With Domingo receiving audience acclaim as he entered the orchestra pit, the curtain rose to our Figaro, Daniel Okulitch – clad in a white T-shirt with red suspenders – up on a tall ladder roller-painting a black wall with fire-engine red paint. (The costume was strikingly different from how Okulitch was clad when starring in Shore’s “The Fly”. See William’s review at Dissecting “The Fly”: the American Premiere of Shore’s Opera in L.A. – September 7, 2008.)

[Below: Figaro (Daniel Okulitch) at opera’s beginning; edited image, based on a Robert Millard photograph, courtesy of the Los Angeles Opera.] Stage director Ian Judge’s ideas can be controversial (see Powerful, Edgy “Tannhauser” at Los Angeles Opera – February 28, 2007). But this production – whose sets by Tim Goodchild and costumes by Deidre Clancy were often of stunning quality  – was very traditional except for some comic moments as when Cherubino (sung by Croatian mezzo-soprano Renata Pokupic, one of several Los Angeles debuts in the “Nozze” cast) marches off to military duty, his headgear being that red paint bucket!

[Below: Figaro (Daniel Okulitch) encourages Cherubino (Renata Pokupic) to get into the spirit of his new military assignment; edited image, based on a Robert Millard photograph, courtesy of the Los Angeles Opera.] Other debuting principals have been reviewed in peformances elsewhere. The Susanna was Marlis Pedersen (See “Lulu” at the Lyric – November 19, 2008) and Count Almaviva was played by Bo Skovhus (see Night at the Museum: “Iphigenie en Tauride” Springs to Life in S. F. – June 17, 2007.)

Also debuting were the Doctor Bartolo (Alessandro Guerzoni) and the Countess Almaviva (Martina Serafin ). The Countess’ bedroom scene reveals a magnificent all-white salon with a white 1930s telephone on the bed as the champagne-sipping countess meanders about – in bare feet. Is this an unsubtle hint she could double as The Barefoot Contessa?

[Below: Susanna (Marlis Pedersen, left) and Countess Almaviva (Martina Serafin, right) dress up Cherubino (Renata Pokupic) as a girl; edited image, based on a Robert Millard photograph, courtesy of the Los Angeles Opera.] 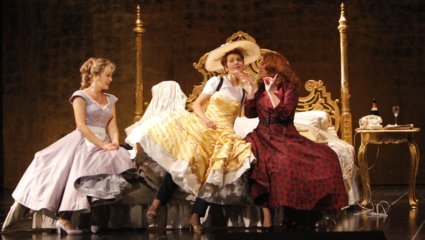 England’s Christopher Gillett was a show-stopping Don Basilio earning by far the biggest laughs. By far the most  hilarious git-up costume was that of the ultra-hilarious Marcellina made up as a very uppity Lady whose gestures garnered bigtime laughs.

[Below: Don Basilio (Christopher Gillett, left) joins Marcellina (Ronnita Nicole Miller) and Dr Bartolo (Alessandro Guerzoni) in scheming to break up the marriage of Figaro; edited image, based on a Robert Millard photograph; courtesy of the Los Angeles Opera.] 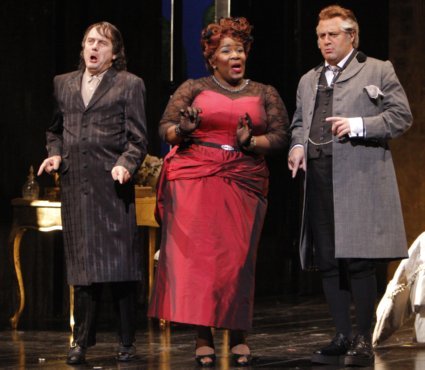 Mr Domingo conducted with his usual supreme control and charm – yet he had been singing in “Il Postino” not even 22 hours before. His energy level is astonishing — a comment heard from nearly everyone. This was a wonderful treat, beautifully performed by a well-rehearsed, excellently balanced and matched cast who really knew their stuff, making for the experience every opera lover hopes for. I say to all this crew – including the under-praised hard-working troops behind the scenes making this happen – Bravi! Bravi!

At final curtain responding to a roaring, standing ovation, the cast came forward again and again, but Mr Domingo stood back with his cast and let the others receive the adulation, particularly young soon-to-be superstar tenor Charles Castronovo with whom he sang the dynamite final duet (about which Mr Castronovo said was about as much a thrill as a young singer could conceive!).

[Below: Pablo Neruda (Placido Domingo) and Mario Ruappolo (Charles Castronovo) in the final duet of “Il Postino”; edited image, based on a Robert Millard photograph, courtesy of the Los Angeles Opera.] 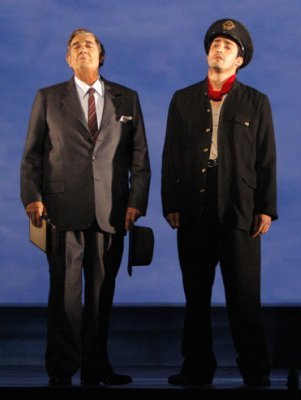 And this is so typical – and so elegant a gesture from today’s undeniably pre-eminent tenor Superstar, and ambassador extraordinaire for the opera world!