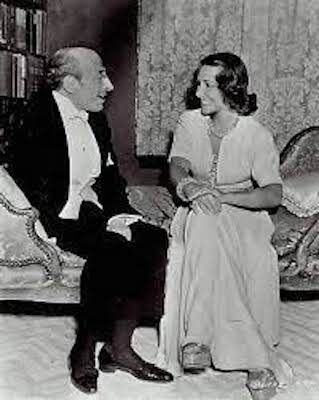 This is the third in a series of guest commentaries by author and historian Arthur Bloomfield, whose new e-book on the styles of the great oldtime opera and symphony conductors is posted at www.morethanthenotes.com.

At least one prominent historian of the Metropolitan Opera – and perhaps a few copycats too – dismissed the diminutive and ubiquitous Gennaro Papi as a routinier. But to characterize thus this creative ball of fire, this master of operatic edginess – he had a long history in winter and summer opera in Chicago, then came to the Met in the mid-Thirties – is to absolutely miss the point. Look in more modern times to Nello Santi, fifty years now at the Zurich Opera, for a maestro in this mode, a conductor of fire, charm and total mastery of that sweet science called rubato.

[Below: Rosa Ponselle; edited image of a historic photograph.] 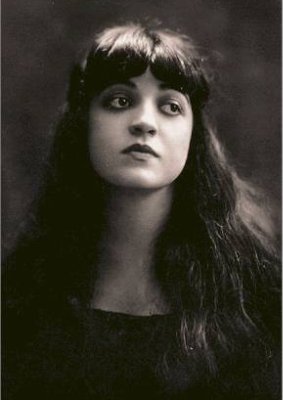 Off to Cleveland, Ohio we go. The Met is on tour, it’s April 17, 1937, and Papi is in the pit for Carmen with Rosa Ponselle. Here is our log of this performance:

a) an urgent, light-stepping prelude, the toreador tune dished out with a characteristic Papian asymmetry suggesting our hero is a casual hombre not quite to be trusted,

b) a pregnant “here goes” pause before the Fate theme, this of course written into Bizet’s score with a full bar fermata rest that’s not always embraced,

d) a mad dash of those stampeding stage-door Romeos as the cigarette girls take their break,

g) in the second act a whirling gypsy dance, a cavalry charge into the lilting toreador aria, then with the Flower Song an introductory English horn that seems to announce: “oh dear dear, all is lost!”

Then we’re indebted to Papi for brisking up the smugglers’ chorus early in act 3. Bizet’s allegretto moderato pegged at 96 beats to the mountaineer minute is a shade conservative, the effect more dour perhaps than ideal for these bandits with riches on their mind – at 120 beats Papi gives them the drive to hustle a bit. Next bright idea: by pitching the heart of the Card Scene ten beats below the 66 of Bizet’s andante molto moderato Papi delivers Tragedy at its most riveting. Not to say painful!

And to think that the name Papi is better known these days for sexy underwear . . .

[Below: Milton Cross at his NBC Blue Network microphones for the Metropolitan Opera; edited image of historical photograph from www.coutant.org.] 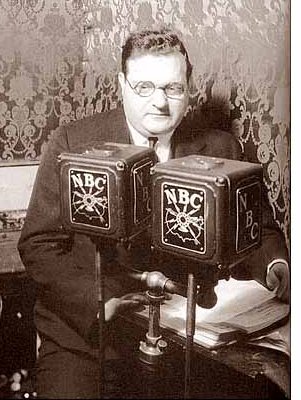 Also from our Met Opera Time Machine (“and here is our conductor, Gennaro PA-pi,” intoned beloved Milton Cross many a winter Saturday over the Blue Network, chewing his vowels with relish):

2-15-36: An Il Trovatore coming on as a veritable jungle of emotions. Biting anger, caprice, a sly edginess: all this to scrape most delightfully the bottom of the barrel of pathos.

1-8-38: Another Trovatore to remember — for the elegant ripple of strings in Leonora’s first act cabaletta, the No Rush of Manrico’s, let’s face it, narcissistic serenade, the tension and refinement of the subsequent trio involving our heroine and her two suitors.

2-6-38: A rip-roaring Aida with a jaunty, swinging chorus of Egyptian hawks in the first scene, later a snap-crackle-pop Triumphal Scene stamped with Papi’s trademark volatility to capture all those mixed emotions. Tchaikovsky’s beloved term incalzando (meaning heating-up) might have been invented for this interpretation.

And 3-11-39: A Rigoletto that comes to the point quickly in the deep despair of an accursed prelude on the downswing from its fist-clenching climax . . . and this despair provides an echo to the post-climax dash-dot-dash-dash’s of the prelude to Lucia di Lammermoor the matinee of 2-27-37: in Papi’s hands they suggest nothing so much as the forced curtseys of a heroine at a fete against her will. 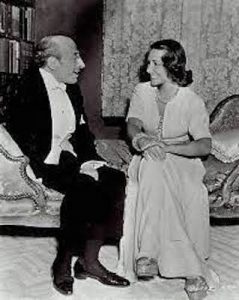 And now I see I haven’t even got around to Papi’s slyly charming Don Pasquale . . .

For the previous posts in this series, see: Guest Commentator Arthur Bloomfield: “A Great Time Machine Trip”, and also