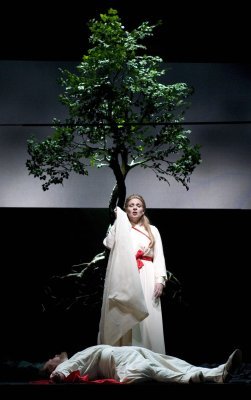 Nashville is the official capital of the State of Tennessee and the world’s unofficial capital of American country music, but it is also the birthplace and home town of Wagnerian heldentenor Clifton Forbis. In yet another extraordinary example of what might properly be described as a Golden Age of American opera singing, Forbis is inhabiting the niche of the most robust roles of the tenor repertory.

I had heard (and reviewed) Forbis in two different cities (San Diego and San Francisco) as Samson in Saint-Saens’ “Samson et Dalila” and in Chicago at the Lyric Opera as Tristan in Wagner’s “Tristan und Isolde” (with Deborah Voigt as Isolde and the current cast’s Grimsley and Milling as Kurwenal and Marke).

His Chicago Tristan had been remarkable, even though it was announced he was singing through a bad cold. With no announcement in Seattle of congestion or vocal compromise, I had high expectations of a fine performance from a fit Forbis. The resulting performance was fit and fine, but also fantastic.

[Below: As he lays dying in Kareol, Tristan (Clifton Forbis) rouses himself to tear off his bandages; edited image, based on a Rozarii Lynch image, courtesy of the Seattle Opera.] 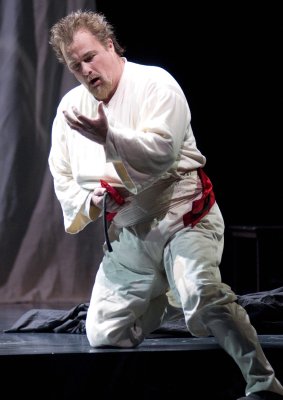 Nor is the Tristan the only cast member to hail from the American South. Grimsley (the Kurwenal for Seattle as well as Chicago), is from New Orleans, the Brangaene is from San Antonio and the Melot is from Columbia, South Carolina. The remaining two principals are Scandinavians –  a Swedish Isolde and Danish Marke.

Seattle Opera chose to mount Wagner’s “Tristan und Isolde” in a new production, around which I suspect much discussion will occur, some of which will unjustly divert attention (and newsprint) from the high level of quality Wagnerian singing. My own tempered thoughts on the production are stated below.

I confess to being a disciple of David Hockney’s pronouncement that “Tristan und Isolde” should be a feast for the eyes, as well as the ears, and have gloried in Hockney’s colorful costumes and the scenic splendor of the Hockney sets, owned by the Los Angeles Opera and rented out from time to time to those companies fortunate enough to secure access to them.

But “Tristan” is foremost a feast for the ears. The Seattle Opera Orchestra, led by its principal guest conductor, Asher Fisch, masterfully reproduced Wagner’s luxurious harmonies that revolutionized not only opera but all of classical music.

Forbis’ soul mate, Isolde, in this exposition of resplendent vocalism, is Annalena Persson, a young and attractive Swedish soprano in her American debut.

[Below: Isolde (Annalena Persson) inspects a phial of a poison she intends to use in a murder-suicide as a horrified Brangaene (Margaret Jane Wray) looks on; edited image, based on a Rozarii Lynch photograph, courtesy of the Seattle Opera.] 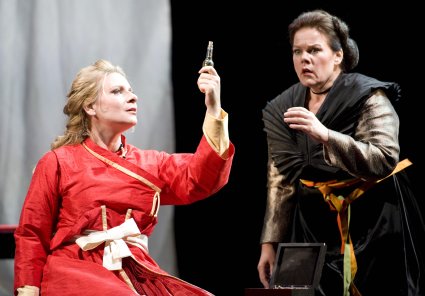 The remainder of the cast constituted much of the Seattle Opera’s previous “Ring” teams – Margaret Jane Wray as Brangaene, Greer Grimsley as Kurwenal, Stephen Milling as King Marke and Jason Collins as Melot. The performance of each of these principals was as stylish as it was sonorous. [For representative reviews of “Ring” operas starring Grimsley, Wray and/or Collins see: Wagner, Wadsworth and Lynch Team for Seattle’s Magical “Rheingold” Revival – August 9, 2009 and Seattle Opera’s Memorable “Walkuere” Revival – August 10, 2009.]

My previous reviews have spent some time on the differing approaches to Wagnerian opera, and especially the “West Coast Wagner” productions. Of course, there is no single “Out West” style or approach. Even so, it is interesting that there now exist what I call “cinematic” productions of the four operas of Wagner’s “Ring of the Nibelungs” in Seattle, of “Tristan” at Los Angeles Opera, and of “Tannhauser” (recreating Guenther Schneider-Siemssen’s sets that the Metropolitan Opera has since replaced) in San Diego.

For me, a “cinematic” opera production is one in that exudes color (the Seattle “Ring” would shine in technicolor and cinemascope) and a sense of it being a real time and place, even recognizing the mythic nature of Wagner’s output of operas. (In this analogy to film, Francesca Zambello’s production of the “Ring” at the San Francisco Opera might be thought of as cinema-verite.)

In contrast, stage director Peter Kazaras and set designer Robert Israel have approached the opera in a quite different way. A “whole stage” unit set dominates the three places (respectively, the ship transporting Isolde to Cornwall, the grounds of King Marke’s castle, and the coast of Brittany) in which each act is supposed to take place. But his sets are abstractions, permitting the two lovers to remain intertwined in the things that matter to them – passionate love, darkness and death – without the distraction of a real physical world around them.

[Below: Tristan (Clifton Forbis) and Isolde (Annalena Persson) express their longing for eternal night; edited image, based on a Rozarii Lynch photograph, courtesy of the Seattle Opera.] 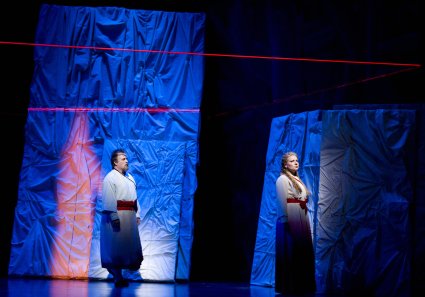 Even when the opera is played straight, Tristan and Isolde have demonstrably disconnected themselves from the realties that surround them, in contrast to Brangaene, Kurwenal and Marke – three of the most practical and insightful of all operatic characters. Even Melot, whom Tristan can see is compromised by repressed feelings for Isolde, behaves in a way that his fellow knights might consider as appropriate under the circumstances.

I believe there to be a disconnect (quite possibly deliberate) between the abstraction of the sets and the specificity of the costumes, which evoke the fashions of these long ago Dark Ages.

[Below: Greer Grimsley is Kurwenal; edited image, based on a Rozarii Lynch photograph, courtesy of the Seattle Opera.] 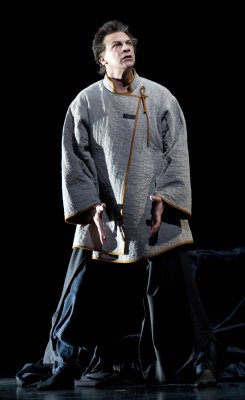 As you shatter reality (and Wagner’s libretto takes several steps towards such shattering) and move from the real to the surreal, as my reviews continue to stress, the ability of the presenter to elucidate a specific reaction from any particular audience member, decreases.

In my case, my personal reaction to Kazaras’ dreamworld direction and Israel’s sets is the restoration to my consciousness of a thought that this reviewer has secretly held for some time – that everything that happens in “Tristan und Isolde” is, in fact, Tristan’s hallucination at the time, before this opera supposedly begins, when he lay on his deathbed, wounded by Morold, his wounds being treated by Morold’s bethrothed Isolde.

[Below: Stephen Milling is King Marke; edited image, based on a Rozarii Lynch photograph, courtesy of the Seattle Opera.] 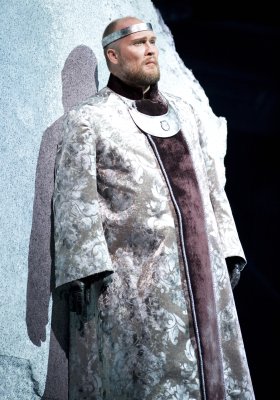 In my imagination, all the sequences of events – Morold’s beheading, Tristan’s capture of Isolde for King Marke, the shipboard elixir of love, the liebesnacht, Melot’s betrayal and mortal wound, and his death at Isolde’s side in Kareol – were the dying fantasies of a hero whose mortal blow had been suffered even before the opera begins.

Thus I tend to envision Israel’s sets, which, of course, were not any way conceived for such a purpose, as a kind of Celtic limbo or purgatory for a dying hero who is conflicted by being consumed by a forbidden love. Kazaras and Israel are surely deconstructing any reality that may be thought to exist in this opera. How we put the deconstructed pieces back together again in our own mind may prove insightful to some of us. For others of us, we should just concentrate on the singing. It’s worth the price of the ticket.

During the Liebestod Israel uses that arresting image – a tree whose roots are visible –  by coincidence or as an homage, that is seen in the opening credits of the Home Box Office television series “Six Feet Under”. Although one might conceive of some parallels between the Emmy-winning series and the great Wagnerian opera, I’m tending to guess it’s coincidence.

[Below: Isolde (Annalena Persson), above the body of Tristan (Clifton Forbis) sings of dreamless death; edited image, based on a Rozarii Lynch photograph, courtesy of the Seattle Opera.] 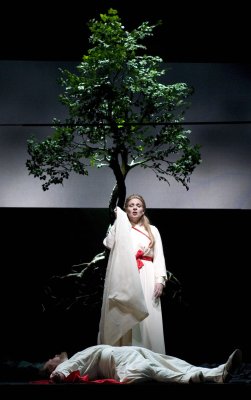 The cast and conductor received enthusiastic applause from the Seattle audience. It probably should be recorded that the stage director and set designer did receive more than a few boos, with insufficient volume from the remainder of the audience to drown the boos out.

However, the production, with its translucent blocks and megaliths, is never offensive. Some elements are likable, like its panoramas of the sea and woodlands, framed at mid-height at the back of the stage. The positioning of Brangaene for her second act warning for the lovers, on a catwalk at the very top of the theater, produced an enchanting sound. Even if one argues the production does not do much to illuminate the story, neither does it do much to obscure it.

“Tristan” is a major undertaking for any company anywhere in the world. Seattle Opera provided a musical performance of which any world company should be proud. Even if someone suggests that you might not “get” the physical production, don’t take that as a reason not to buy a ticket and go to it.

[For my reviews of other productions of this opera, see: Liebesnacht: Treleaven’s Triumphant Tristan and Watson’s Wondrous Isolde at L. A. Opera – January 23, 2008, and