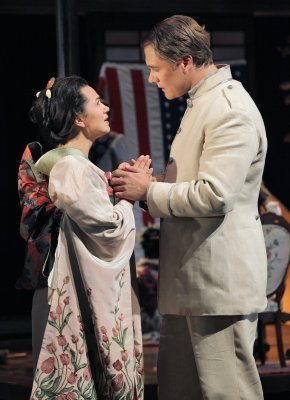 Puccini’s “Madama Butterfly” is the Santa Fe Opera’s signature work, having been the first performance by the company in 1957 and having opened new houses in 1968 and 1998. The opera’s host city in Northern New Mexico takes pride in its 16th century European ties that precede the birth of opera, yet the State of New Mexico was only 45 years old when the now 53 year old Santa Fe Opera performed that first “Butterfly”.

Thus, as a symbolic gesture, new General Director Charles MacKay chose to commission a new production of the opera to open the first season planned by him. The new production was staged by British director Lee Blakeley, in collaboration with French scenic designer Jean-Marc Puissant, and  German costume designer Brigitte Reiffenstuel.

On previous occasions I had seen Walker conduct “Butterfly” with Veronica Villarroel and Raymond Lopardo (See my review at: Australia Opera’s “Butterfly” Charms Pittsburgh – October 19, 2007) and I had seen Brandon Jovanovich, this performance’s Pinkerton, in the role previously (See my review at: The Remaking of San Francisco Opera Part III “Madama Butterfly” – December 8, 2007.) Thus, based on these very positive impressions,  I was anticipating an enjoyable performance.

New to me was the singing of Kelly Kaduce, the Butterfly. She has appeared at regional companies throughout the United States to great acclaim, and an official of an East Coast opera company last year urged me to cross the country to hear her in performance when she sang there. Alas, sheer logistics prevents one from being everywhere! 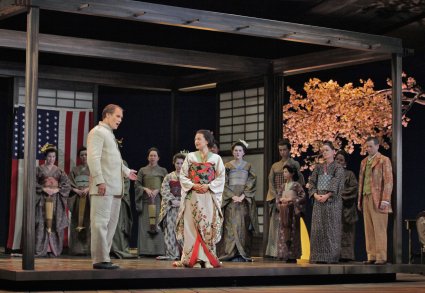 Yet, as often as this masterpiece has been shown in these evenings under the New Mexico sky, there is something about the opera that permits and rewards departures from even the opera’s own traditions. How we think about it is always subject to change, and we can often find the justification for that change in its libretto and in the score of the opera Puccini wrote for us.

The stage setting prior to the opera’s beginning is the shell of a Japanese house in front of a giant rising moon. Soon the sides of the house with their paper windows and sliding walls are put into place. Keith Jameson’s Goro arrives with an old style camera on its tripod legs that in time will result in a flash photo of the wedding. Pinkerton has brought a trunk of household furnishings, and unties them with the help of two shipmates that have accompanied him.

The wedding procession, the women carrying parasols, crosses in front of the image of the giant moon. Pinkerton and his buddies are engaged in surely ribald conversation, when Kaduce’s Butterfly asks why Jovanovich’s Pinkerton is laughing. 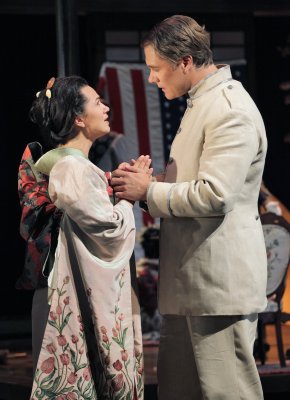 Puccini lays out for us the failure of both Cio-Cio-San and Pinkerton to comprehend what the marriage meant to the partner. Pinkerton is more than a bit jaded, sniggering with his officer shipmates, as if amused about how quaint the rituals are for this particular sexual arrangement.

However, Jovanovich’s Pinkerton is more cross-culturally clueless than villainous. He becomes the “in the moment” lover, passionate enough for Butterfly to cherish her delusions for three years after his naval responsibilities dictated that he abandon her. Kaduce and Jovanovich soared in the lyricisim of the love duets.

[Below: Butterfly (Kelly Kaduce) is assisted in donning her wedding kimono by Suzuki (Elizabeth DeShong), while Pinkerton (Brandon Jovanovich) looks on; edited image, based on a Ken Howard photograph, courtesy of the Santa Fe Opera.] 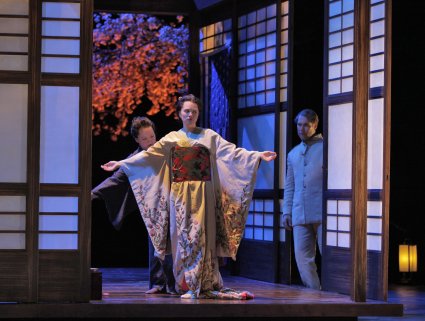 The part of Goro the marriage broker is yet another take on this juicy character role by tenor Keith Jameson. Played sometimes as if he were a Japanese Sporting Life like the character in Gershwin’s “Porgy and Bess”, Jameson’s Goro has a nasty streak, in the second act exploiting the dire circumstances of Butterfly and Suzuki in his determination to get his commission from a Yamadori-Butterfly marriage.

In the past I have stated my preference that Sharpless be cast with a baritone who possesses a large, lyrical voice and who exudes gravitas, since this role contains some of Puccini’s most beautiful music written for the baritone voice. I cannot say that James Westman met these expectations, but what he did do worked in this production.

[Below: Sharpless (James Westman, left) warns Pinkerton (Brandon Jovanovich) that his new bride is taking the marriage seriously; edited image, based on a Ken Howard photograph, courtesy of the Santa Fe Opera.] 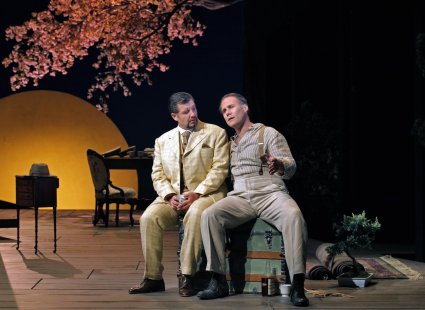 Westman’s Sharpless evoked the image of an annoyed foreign service bureaucrat, worrying about the predilictions of some of his countrymen to exploit for their own pleasures the availability of native women. Such a sentiment I am sure can be found even today in the European and North American consulates located in certain regions of the world, where sex tourists arrive to create who knows what mischief in the host community.

Kaduce’s performance justified her reputation, displaying a large spinto voice with the gleaming top that this opera requires. Her love duets with Brandon Jovanovich, who has emerged as a tenor with a beautifully sounding power voice, capable of mastering the music both of Puccini and Wagner, were memorable.

Kaduce, Jovanovich and DeShong were also the accomplished actors one now routinely expects from American trained artists. They rose to the occasion for Blakeley’s stage direction, that emphasized the darker aspects of Puccini’s work.

Complementing Blakeley’s conceptualization of the piece, were the Puissant sets, that began with moonlight and a postcard perfect Japanese house, that in the second act was seen to be a deteriorating structure in a seedier section of Nagasaki.

[Below: Butterfly (Kelly Kaduce) explains to Suzuki (Elizabeth DeShong) why she must not lose hope; edited image, based on a Ken Howard photograph, courtesy of the Santa Fe Opera.] 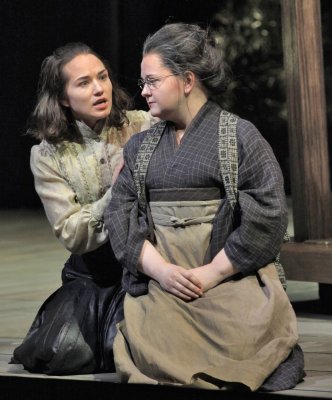 I  had been impressed by Elizabeth DeShong, the Suzuki, when she played the page boy, whose lust for Captain Narraboth was even exceeded by that man’s ultra high risk obsession with the title character in San Francisco Opera’s 2009 performances of Richard Strauss’ “Salome”.

Her Suzuki is a usually mild-mannered, bespectacled older woman, but she showed her own dark streak when Jameson’s Goro was especially offensive, grabbing his walking stick and beating him savagely with it.

The second act of “Butterfly”  in every 21st century production I have seen combines what in the  Paris edition – Puccini’s final word on the score –  are the second and third acts. Conductor Walker observed this new “convention”. Combining the two acts permits the intensely lyrical flower duet, to be followed by the humming chorus (beautifully sung and, caressed by the Santa Fe Opera acoustics, producing an enchanting sound) to be followed without interruption by the masterful third act prelude, which, in the combined acts, might be thought of as an intermezzo.

(Walker also added a few snippets from the earlier Brescia edition of the score, to fill out the parts of the relatives during the Act I wedding procession and to restore a few empathetic lines to Kate Pinkerton’s part.)

[Below: Kate Pinkerton (Emily Lorini), fully comprehending the situation, promises Butterfly (Kelly Kaduce) that she will raise the boy properly; edited image, based on a Ken Howard photograph, courtesy of the Santa Fe Opera.] 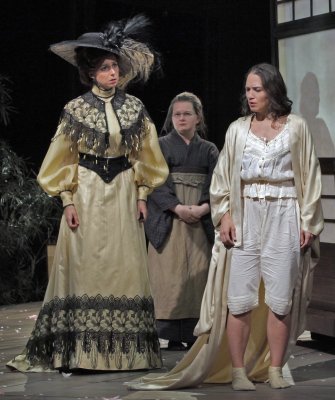 But in any production that beauty and lyricism of the flower duet and humming chorus and preceding those, Butterfly’s anthem to eternal hope, Un bel di, vedremo (spectacularly performed by Kaduce) are ultimately overwhelmed by the high tragedy of the events overtaking Butterfly.

We, of course, know Butterfly’s fate. We can only guess Pinkerton’s future. But Blakeley and Jovanovich provide us with some clues, in Addio fiorito asil, the genuinely passionate and superbly sung expression of life-altering regret; in Pinkerton’s heartfelt grief at his discovery of the toy battleship of his, heretofore unknown, son; and finally, Blakeley’s chilling ending – Pinkerton horrified, not only at the suicide, but at his son’s holding the weapon that Butterfly used to end her life.

[Below: Pinkerton (Brandon Jovanovich) comes upon the horror of the suicide of Butterfly (Kelly Kaduce) with the very knife that his son (Makai Pope) holds in his hands; edited image, based on a Ken Howard photograph, courtesy of the Santa Fe Opera.] 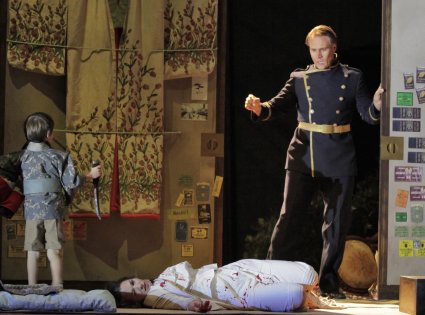 The very familiarity of “Butterfly”, this most ubiquitous and unceasingly popular opera, leads to a feeling of overexposure, if not, in some circles, a kind of contempt. Even so, it never ceases to impress me as one of the most extraordinary experiences that one encounters in an opera house.

What assures its immortality is the ability of different directors, conductors and singers to find new musical and dramatic insights into the work every time it is mounted. At Santa Fe Opera, new ways of thinking about this work have continued to emerge decade upon decade.

Blakeley, Puissant, Walker, Kaduce, Jovanovich, DeShong add their names to the list of artists who have, in the heights of New Mexico, achieved new successes in this Tuscan composer’s settings of a Californian’s story about a Japan of long ago.