Previously, I had reviewed the first performance of this season’s production of Gounod’s “Faust” (see Racette Ravishing, Relyea Riveting in San Francisco “Faust” – June 5, 2010). This was the second of three separate mountings of the Robert Perdziola’s sets owned by the Lyric Opera of Chicago that I was or will be scheduled to review, the first being its 2009 revival in Chicago (see my review at Lyric Opera Revives Inventive Corsaro-Perdziola “Faust”: Chicago November 3, 2009) and the third scheduled for April 2011 at the San Diego Opera.

I am personally in a period of “Faust immersion”, having done additional research and thinking about this popular though not completely unproblematic French theatrical masterpice for an article I wrote on a later Gounod opera, “Romeo et Juliette” for the San Diego Opera program. I am currrently doing even more thinking about the piece for yet another print article. Some of my earlier thinking on the piece remains on this website. (See The Devil’s Details Part II: Thoughts on Gounod’s “Faust”).

Notes on the Performance Critiques

I had commented rather extensively on the production when shown in Chicago (organized by stage director Frank Corsaro, using his familiar ideas from earlier decades) and the first performance in San Francisco (organized by stage director Jose Maria Condemi, retaining some Corsaro ideas, but radically changing Faust’s fate). Briefly, I will make some further observations on both my reaction to the San Francisco performances and the published reactions of others before returning to the subject of the production itself.

Normally, I don’t comment on what other reviewers are saying, because I usually don’t read their reviews, not because I’m snobbish about this, but because my available time is always absorbed on own next review, or interview, or other article to get into shape for this website or elsewhere. But there is something about this production which has bewitched and enchanted reviewers in the aggregate. If I attempted to characterize this collective opinion, it would be: “Wow! the production designer, stage director and singer-actors have found things in this piece that we were not  aware were there!”

What’s more, despite a time shift and the substitution of a mechanical loom for a spinning wheel in one scene, the opera was played straight, and included the opening of the “traditional cuts”. All in all, the critics appeared to agree that this is a work that, done well, deserves its place in the opera repertory. Such positive feedback from a quarter that is usually expected to pummel the work (at a time iin which singers who are able to do the work justice are available) will be noted by opera managements. It is my conviction, however, that the set designers, stage managers and artists have been out ahead of the critics in the re-evaluation of “Faust” for some time. (I will explore one critique of the San Francisco performance, by a noted critic and author, at some length a few paragraphs down.)

Yet, despite widespread approval of the Perdziola sets and costumes and Condemi’s staging, some of the critics attending the first performance wandered into minute details of stagecraft  that struck me (and others) as extraordinarily nit-picky. So, in the spirit of critical nit-pickiness, even though I am an unabashed fan of Perdziola’s costumes (see, for example, Bel Canto “Cosi fan Tutte” at Dallas Opera – February 18, 2010), I am announcing my preference for one article of clothing to be re-designed.

In the first scene, the elderly Doctor Faust, disillusioned with his scholarly pursuits, sits in his study. Although no one expects old Faust in dapper costumes, the head gear worn by Stefano Secco in this role is perhaps the least flattering for an ancient Faust in San Francisco Opera history.  (In Cory Weaver’s production photograph, seen below, it looks better than it did in actual performance.) Surely not intended to look farcical, it just doesn’t work with Condemi’s serious approach to the drama.

[Below: the aged Faust (Stefano Secco) contemplates suicide; edited image, based on a Cory Weaver photograph, courtesy of the San Francisco Opera. ] 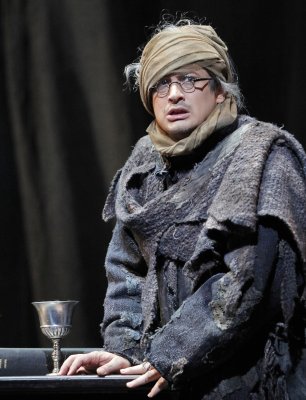 Other than this critique of his appearance in Old Faust’s head covering, I found Secco had measurably improved since the first evening. My past review suggested a tentative, perhaps even underpowered voice, adjusting to the surroundings of a large opera house. By this, the fifth (of eight scheduled performances) his comfort level with the War Memorial had obviously increased and he sounded in much better voice (aided by excursions, doubtlessly unsanctioned by Condemi, the stage director,  to the footlights where Secco’s voice is at its most advantageous.)

Secco’s stagecraft, awkward in the first performance, was much smoother, as the cast, as tends to happen in the later performances in a run, established a comfortable working relationship with the relatively complex onstage goings on.

The Condemi-Perdziola “Faust”  has managed to charm some of the opera’s detractors. Most notable is the reaction of Wall Street Journal critic and “Faust”-curmudgeon David Littlejohn, who shares WSJ’s opera critic duties with mega-“Faust”-curmudgeon Heidi Waleson.

(In the wonderful, wide world of opera dwell many opinions and tastes – and some of us may disagree respectfully from time to time. Littlejohn and Waleson, however, have both publicly and eloquently expressed disdain for the second most popular French opera of all time, and both are too important in the world of contemporary criticism to let their comments pass. My earlier posting cited above on the “Devil’s Details” responded to Waleson’s published opinion. The following paragraphs are my response to Littlejohn.)

Littlejohn found the Perdziola sets and costumes and the vocal performances sufficiently interesting to decree that rather than have “Faust” disappear entirely, as he had suggested needed to happen, it now will be acceptable to have the opera revived occasionally in productions like this one.

The essential elements of  Gounod’s “Faust” with some later augmentations, have survived for 151 years, despite the sneers of generations of detractors. I personally see no problem in discounting the performance review of someone who admits to extreme prejudice against the opera (and I regard Littlejohn’s statement that it should not even be performed is pretty convincing evidence  of prejudice). But Littlejohn’s reluctant, even condescending, statement that there exists a kernal of something to like is probably worth examining.

Littlejohn’s critique of “Faust” is that it is treacly, “musicially obvious” and “religio-sentimental”. He finds that Perdziola and Condemi have provided an antidote to those charges through stripping the sentimentality out of the stage direction, achieving fine performances from Relyea (Mephistopheles) and Racette (Muarguerite) and providing a theatrically impressive ending, with Racette ascending a stairway to Heaven.

[Below: Mephistopheles (John Relyea) joins in the spirit of the church’s kermesse; edited image, based on a Cory Weaver photograph, courtesy of the San Francisco Opera.] 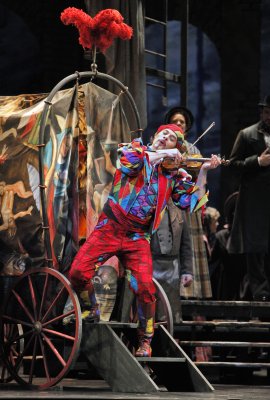 I have recently interviewed the much praised singing actor who plays Mephistopheles. (The first part of this interviews may be seen at  Rising Stars: An Interview With John Relyea, Part I.) I believe Relyea has performed this juicy role memorably. Yet, even though I am enthusiastic about his Mephistopheles, his predecessors in the role that I have seen with the San Francisco Opera are Cesare Siepi, Nicolai Ghiaurov, Roger Soyer, Giorgio Tozzi, Justino Diaz and Samuel Ramey. I cannot associate any of that august group with treacle or sentimentality.

I also have interviewed the stage director. (See Rising Stars: An Interview with Stage Director Jose Maria Condemi, Part I and regard him as a superb talent, with great work ahead of him. Yet, as appropriate and as theatrically valid as Condemi’s stage directions are, I believe it is a vast overstatement to suggest that Condemi has found de novo a uniquely unsentimental way to present this “treacly” opera, and that previous productions of “Faust” – those presenting the opera straight – lacked such an insight.

Gounod’s “Faust”, of course, first drew the ire of some Germans, because it so dramatically departed from its source work, Goethe’s “Faust Part One” that they felt the opera should be called “Marguerite” as it had been for decades in much of Germany. I think that name for the opera (which is the title on the orchestral score of some editions of “Faust”, including the one that this summer’s conductor Maurizio Benini uses) would have been very appropriate.

Certainly, Gounod and his librettist, Jules Barbier, have taken the sketchy episodes of Faust and Marguerite 1n Goethe’s work and made the seduction, pregnancy, madness and redemption of Marguerite the center of the opera. Significantly and perhaps ironically, Gounod’s Marguerite-centered opera first became a hit in Germany, rather than France.

[Below: Faust (Stefano Secco, right) introduces himself to Marguerite (Patricia Racette, center), who is accompanied by Dame Marthe Schwerlein (Catherine Cook); edited image, based on a Cory Weaver photograph, courtesy of the San Francisco Opera.]

Stage directors, certainly including Corsaro in the 1970s and Francesca Zambello in the 1980s, have understood how to portray the circumstances and consequences of Marguerite’s seduction (to which Faust’s contract with the Devil can be thought of as almost a backstory) as theatrically valid. In fact, at least one idea –  Valentin leading military rituals honoring the war dead during the Soldier’s chorus (is that a non-sentimental or sentimental concept?)  – is common to Corsaro, Zambello and Condemi stage directions.

The bottom line is that stage directors have found how to stage a non-treacly “Faust” for many years.There are alternative ways to do it.  It matters whether one thinks Faust will be condemned to Hell or saved by Marguerite to join her in heaven. Restoring all of the music for Marguerite, Siebel and Valentin (and jettisoning the inauthentic Walpurgis Night and ballet scenes) helps.

The cuts were made originally, I suspect, because they are not quite as “musically obvious” as the richly melodic succession of hits that constitute what for more than a century was the standard version of “Faust”, but, with singers like Patricia Racette (Marguerite), Brian Mulligan (Valentin) and Daniela Mack (Siebel) singing the restored music, what ensues is more “dramatically obvious”.

[Below: A pregnant and socially ostracized Marguerite (Patricia Racette) works at a mechanical loom in a textile factory; edited image, based on a Cory Weaver photograph, courtesy of the San Francisco Opera.] 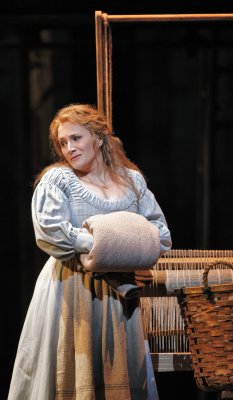 My personal preference is for the Death of Valentin to occur before the church scene (allowing a director like Zambello to have a vigil for Valentin’s body in the very church in which Marguerite is being tormented by the Devil). But in whichever order these two scenes are played, their impact is usually highly dramatic and unsentimental, with nary a drop of treacle to be seen.

For those scanning to the bottom line, having seen the San Francisco Opera cast perform the work twice, I believe the opera was well served by them. The production –  which I described in more detail in my review of the June 5th performance – is attractive and absorbing. Inventive ideas are built into the production, such as the garden well into which Mephisto disappears below through smoke and steam to obtain the box of jewels for Faust to seal the deal with Marguerite. And the touch by which Relyea’s Mephistopheles offers an apple to a statue of the Virgin Mary at the end of Garden Scene is brilliantly inspired.

Special notice is made of set designer Perdziola’s magical setting for the rapturous music of the Garden Scene in which Marguerite is seduced. The team that brought this production to San Francisco has obviously advanced the cause for this venerable work.