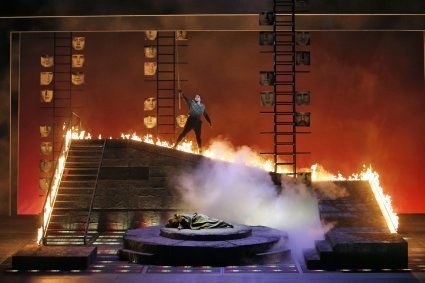 Although the “Walküre” production is almost the same as the one I reviewed when it first appeared in Washington D.C. (See Zambello’s Dazzling “American Ring ‘’Walküre” at Kennedy Center – March 28, 2007), there were some revisions, especially in the design of “Brünnhilde’s Rock”, where first the valkyries congregate and then three of the principals arrive for the opera’s final scene.

Although the WNO cast was a strong one, the San Francisco performance was musically even more impressive, particularly the world class conducting of Donald Runnicles.

Since I am scheduled to attend and review BOTH of the first two performances of “Die Walküre” and my previous review of its Kennedy Center showing can be accessed through the hyperlink in the above paragraph, I will give my impressions of the June 10th performance here and additional remarks after the June 13th performance.

Thoughts on the American Ring

The Zambello “Ring” is a mixture of  traditional and non-traditional approaches to Wagner’s masterwork. It is traditional in that it follows Wagner’s story explicitly, and non-traditional in that its images are based in the “American experience”. The politically savvy will note the juxtaposition of images (Hunding’s lower middle class household and the junk-strewn right-of-way under a freeway interchange as the counter of the urban penthouse office of a corporate enterprise in which Wotan and Fricka are obviously major players.)

Some of what is written about the American Ring might lead one to expect that it abounds in feminist, antiwar, or environmental themes, but nothing in what Zambello has shown San Francisco so far can be said to preach “messages” to us, nor are any of her images out of step with Wagner’s story.

Indeed Wagner’s gods, whether the production is designed by Zambello or by another artist, have more resources to begin with than the mortals, but lose it all through their hubris, and concede the world to the humans. Of course, women with such diverse stations as the Rhinemaidens, Erda, Fricka and Brünnhilde, are actors, in good or bad ways, in determining the fate of the world. And though the Valkyries do seem to get a bit jaded in their constant work on the battlefield, they would indeed be an articulate group in explaining the horrors of war.

The Seattle “Ring”, in which gods, humans and dwarves all live in a primeval forest on a mountain’s slope, certainly seem consistent with Wagner’s pre-medieval mythological setting (see my reviews in this website’s August 2009 archives). None of these races exist as “noble savages”, but instead do the wrong things or maybe just have too much bad luck, but the end result is that  the race of humans will come to dominate the planet. If there is a difference between presenting the “Ring” in some vaguely 7th century Dark Ages setting or in something that only those who have lived in the late 20th or the 21t century could know, Zambello’s work clearly shows that the impact of Wagner’s story remains the same however you do it.

Yet you can get some insights into the great work when you change the images, as Zambello has done. Zambello’s corporate gods clearly operate in a modern space in which class divisions are more obvious and  pronounced. When Wotan descends from Valhalla’s corporate headquarters to street level to mingle, to Fricka’s dismay and disgust, with mere mortals, Zambello’s ideas may be closer to the human condition in a 21st century urbanized society (be it American or elsewhere) than observing the hierarchy of giants, gods and dwarves in a European primeval forest. But Wagner’s story remains the same, whatever its surroundings.

But these are my thoughts. Zambello puts accessible images onstage (do not expect the incomprehensible or the offensive from her), and everyone in the audience  is invited to work out what they mean.

San Francisco Opera’s former music director, Donald Runnicles, in his first appearance at the podium after a year’s absence, received a warm ovation from the San Francisco audience. He led the San Francisco Opera Orchestra in the rousing storm music during which the projections of the waves of an open ocean and, in time, a forest were the accompanying images. Then Siegmund (Christopher Ventris) appears outside a rural, clapboard house in which Sieglinde (Eva-Maria Westbroek in her San Francisco Opera debut) awaits her husband.

[Below: Sieglinde (Eva-Maria Westbroek) steps outside of Hunding’s house; edited image, based on a Cory Weaver photograph, courtesy of the San Francisco Opera.] 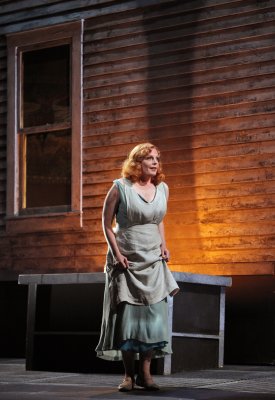 When Westbroek’s Sieglinde invites Ventris’ Siegmund to enter the house, the siding flies away, revealing a homespun interior. Soon her savage husband Hunding (Raymond Aceto) arrives with his kinfolk.

The “Walküre” first act, is, of course, one of the most lyrical parts of any opera, and, as the Wälsung twins, Ventris and Westbroek sang passionately and beautifully, with Ventris’ delivery of the great aria Winterstürme wichen dem Wonnemond again meeting one’s expectations of a heldentenor as he had at the beginning of the decade in the title role of Wagner’s “Parsifal”. Westbroek proved to be both a vocally and visually satisfying Sieglinde, the one character who appears in all three acts of the opera.

As Hunding, Aceto, with a dark rich basso, was, as one expects from this accomplished actor, as sinister as he was sonorous. This is hardly a role to be undercast since it is Hunding who changed the fate of the world through his argument that villains should have their rights protected also. With Gidon Saks the husband in Washington DC and Aceto in San Francisco, villainy has been in good hands in the Zambello Ring. (For the first part of my recent interview with him, see: Rising Stars: An Interview with Raymond Aceto, Part I.)

[Below: Siegmund (Christopher Ventris) is challenged by Hunding (Raymond Aceto) as Sieglinde (Eva Marie Westbroek looks on; edited image, based on a Cory Weaver photograph, courtesy of the San Francisco Opera.] 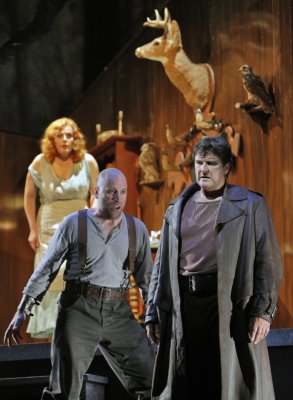 The second act projections move from the woodlands to the clouds that ring the skyscraper heights of a great metropolis. We are in the penthouse corporate offices of  some giant enterprise (Valhalla, Inc.?) and Brünnhilde (Nina Stemme, in her role debut) has dropped in on her dad. Stemme had appeared earlier in the decade (during the general directorship of Pamela Rosenberg) as Senta in Wagner’s “Fliegende Holländer”, making a strong impression in a problematic and unpopular production. As Brünnhilde, Stemme clearly connected with the San Francisco audience. Already announced for the Brünnhilde roles throughout the “Ring” in 2011, she seems destined to become one of the favorite Wagnerian sopranos of this company and its audience.

[Below: Brünnhilde (Nina Stemme) is in a playful mood as she visits the office of her father, Wotan (Mark Delavan); edited image, based on a Terrence McCarthy photograph, courtesy of the San Francisco Opera.] 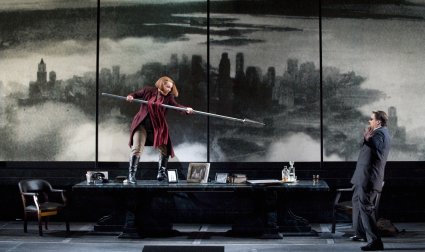 I had expressed admiration for Delavan’s “Rheingold” Wotan in the two performances that I reviewed when it appeared in San Francisco two summers ago. (See Delavan Shines in a Gleaming San Francisco “Rheingold” – June 14, 2008 and Pure Gold: A Second Look at S. F.’s “American Ring Rheingold” – June 22, 2008.) But now he is emerging as one of the greatest of contemporary Wotans, with a power voice, clear diction, effective acting and an all round believability.

The interchange between Delavan’s Wotan and the Fricka (Janina Baechle, also in a San Francisco Opera debut) was the most obvious example of the edge that the San Francisco cast in totality had over the Washington counterparts, whose Fricka was assayed by a wonderful singer of past years, who no longer had this part in her voice. I miss the insightful stage direction in Washington that had Fricka affectionately snuggling with her Wotan even as she was reading him the riot act, but ultimately Fricka is a great part that must be sung by an artist of stature in the prime of her voice, and Baechle met that requirement.

[Below: Fricka (Janina Baechle) presents her list of non-negotiable demands to Wotan (Mark Delavan); edited image, based on a Cory Weaver photograph, courtesy of the San Francisco Opera.] 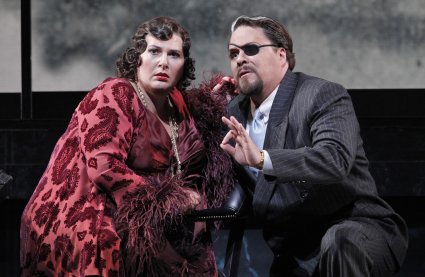 The second scene of the act, placed underneath a freeway, was an appropriately eerie setting for the emotional events of this critical part of the story. Westbroek portrayed the distraught Sieglinde vividly, and Stemme appeared before Ventris’ Siegfried to announce his death, whose outcome is one of opera’s most affecting scenes. (The crossing of the stage during theTodesverkündigung by deceased servicemen holding their photographs continues to be one of Zambello’s most salutary ideas.) So too was the violent image of an angry Wotan projected by Delavan.

[Below: Siegmund (Christopher Ventris) and Sieglinde (Eva-Maria Westbroek) lie together on a discarded sofa in the front center, while Brünnhilde (Nina Stemme) approaches from the left to announce Siegmund’s death; edited image, based on a Cory Weaver photograph, courtesy of the San Francisco Opera.]

At act’s end, a couple sitting in front of me who obviously did not know much about the story, asked each other if that was the ending of the opera. (As odd as that question might sound, it does give a sense of how tumultuous it might seem to a newcomer, experiencing for the first time in short order Siegmund’s and then Hunding’s deaths, Brünnhilde’s escape with Sieglinde and the pieces of Siegmund’s sword and Wotan’s angry pursuit of his daughter, all to Wagner’s swirling act-closing music.)

The third act not only contains most of the opera’s most famous music, but begins (after another bout of quickly moving projections) with the Ride of Valkyries, which, of course, is the composition for which Wagner receives the greatest recognition. His wedding march from “Lohengrin” is even more familiar, but few people seem to associate “Here comes the bride”  with classical music, much less Wagnerian opera.

In the hands of the artists that the San Francisco Opera has assembled, with Runnicles conducting the Wagner-savvy San Francisco Opera Orchestra, Stemme, Delavan and Westbroek as the act’s principals and an imposing group of valkyries – Pamela Dillard (Grimgerde), Molly Fillmore (Ortlinde), Priti Gandhi (Rossweise),  Wendy Bryn Harmer (Gerhilde), Suzanne Hendrix (Schwertleite), Daveda Karanas (Waltraute), Maya Layhani (Siegrune) and Tamara Wapinsky (Helmwige) – the act would be an extraordinary musical experience even if it were a “concert production” without sets and costumes.

However, the musical element was enhanced by the audience absorbing production. The opera company’s advertising stressed the costuming of the valkyries as paratroopers (with new staging for the descending ladies that improved an already exciting Washington National Opera version). In the “Ride”, much of what happens provides “local color” and a bit of plot exposition, but is not that essential to the main story line. But opera is theater and, in the right hands, there are few opportunities in opera that are more theatrical than this first part of Act III, and Zambello made it sizzle.

But the highlights of the scene remain, as always, Brünnhilde’s announcement to Sieglinde that she is pregnant with Siegfried (leading to the Westbroek Sieglinde’s passionately sung O hehrstes wunder), Brünnhilde’s pleading with Wotan to encircle her sleeping body with the Magic Fire, Wotan’s Farewell, and the flames at act’s end. In each of these iconic moments the Zambello staging was entirely appropriate and always affecting.

I will report further on the opera’s second performance, but, its rotation with Condemi’s excellent staging of Gounod’s “Faust” in the Perdziola production and Mariani’s superb new production of Puccini’s “Girl of the Golden West” it shows that one increasingly can depend on this house to provide the world’s highest standards of opera production.

Nor only so I recommend the “Walküre”, I suggest that operagoers who are considering traveling to San Francisco seek the opportunity to see all three productions, if possible.

[Below: Wotan (Mark Delavan) commands that a magic fire surround the sleeping Brünnhilde (Nina Stemme); edited image, based on a Cory Weaver photograph, courtesy of the San Francisco Opera. ] 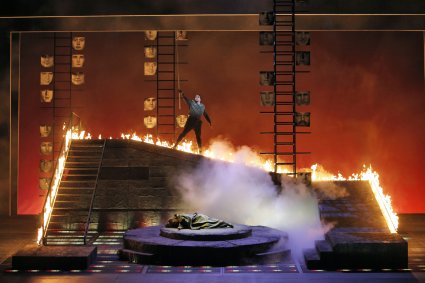