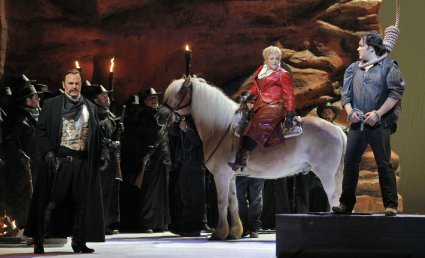 The San Francisco Opera, a company with deep roots in the traditions of Italian opera, serving a city that was created by the California Gold Rush, launched a spiffy new production of “Girl of the Golden West (La Fanciulla del West)” – Puccini’s masterpiece about a love affair in a community of ’49er miners.

Vocal gold was lavished on the production, with important role debuts by Deborah Voigt (Minnie), Salvatore Licitra (Dick Johnson in his San Francisco Opera debut) and Roberto Frontali (returning after a 17 year absence as Jack Rance). 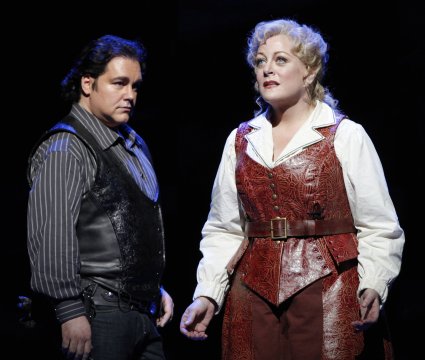 In a cast where ten miners, two Indians and a desperado all have names and personalities, care was taken to make certain every role was in competent hands. San Francisco Opera’s Music Director Nicola Luisotti, one of the opera’s ardent admirers, conducted.

The new production, designed by Lorenzo Mariani, is a co-production with the Teatro Massimo di Palermo (which constructed the sets by Maurizio Balo), and the Opera Royal de Wallonie of Liege, Belgium.

As part of the centennial festivities, Voigt and Luisotti will travel to New York City’s Metropolitan Opera, which will include a performance on December 10 of this year, marking the opera’s 100th anniversary of its world premiere at the Met. (The Met’s production will be used.)

Later that month, the Mariani production debuts in his home company in Palermo (with Licitra and Frontali reprising their roles). Then Voigt will again don buckskins for Lyric Opera’s “Fanciulla” revival in January and February of 2011.

Puccini famously described “Fanciulla del West” as his best opera. It is harmonically one of the most complex of Italian operas, with Tristanesque chromatics, Debussyean whole tones, and a mixture of dissonance with imminently accessible music in the style of folksongs (which one has no problem believing would have been sung by miners had the tunes existed at the time of the story).

Puccini uses the Wagnerian technique of leitmotivs (of which Julian Budden, the great musicologist and student of the works of Verdi and Puccini, identified nearly two dozen), and subscribes to Wagner’s principle of using the orchestra as a key element in telling the opera’s story.

Even with its sophisticated harmonic structure, the opera is as melodious as the other great Puccini works. Unlike almost every other Puccini opera, it is a “feel good” piece, in which no one is really a villain (nor, for that matter, a saint), If the lead tenor is wounded and is momentarily in danger of being hung, he gets to sing the opera’s great aria and to ride off in the sunset with the heroine.

With the swirling opening bars, the curtain rises on a vertical rockface from whose top five miners with pickaxes are rapelling. (One may have reservations on the production as a guide to either the mining country’s geology or economic history, but the image, which seems to have been inspired by Yosemite’s El Capitan,  was theatrically quite impressive.)

Soon Sheriff Rance is engaged in the two matters that interest him most – capturing a notorious gang of bandits, and capturing the heart of Minnie, the mining town’s “never-been-kissed” sweetheart and proprietess of the Polka Bar. Frontali has an attractive light  baritone and acting style that fits this rather ineffectual, probably psychologically depressed, law enforcement officer. Frontali’s portrayal of Rance was spot on. 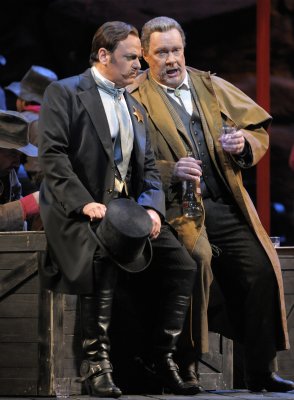 The play on which the opera is based is by San Francisco-born David Belasco (whose parents had immigrated there during the Gold Rush). A Belasco play is as inappropriate as one can imagine for revival in our century, but has many “local color” details that suggest an understanding of what went on in the mining camps.

So too does the opera have an often authentic feel, as when Jake Wallace (sung by Trevor Scheunemann in his San Francisco Opera debut) sings a forlorn ballad and the miners pass the hat to pay for the travel costs for the homesick miner Larkens (Brian Leerhuber) to return to his wife and kids.

But this is Puccini, and, once the local color is nicely painted (as is done for a Nagasaki neighborhood in another Belasco-inspired Puccini work), the soprano and tenor must be brought together for songs of love. Sequentially, we meet Voigt’s Minnie and Licitra’s Dick Johnson.

Minnie (arriving with the rifle she carries when traveling to her bar, even though she seems to prefer a handgun for around the house) is a role that requires a gleaming top on a soprano voice, a requisite that Voigt met handsomely.

Licitra has one of the tenore di forza voices for which the War Memorial Opera House seemed to have been built. Luxurious in tone, full-bodied throughout its range, one can readily understand why he was the tenor the Met offered to dismayed patrons as the replacement for Luciano Pavarotti, when that great tenor canceled his two farewell performances of Cavaradossi in Puccini’s “Tosca”.

Even as an admirer of Licitra’s performances for the Los Angeles Opera (see my review of his Luigi at French Connection: Friedkin’s Cinematic “Tabarro” – L A Opera September 6, 2008) and Lyric Opera of Chicago (Licitra, Radvanovsky Gleam in Lyric Opera’s Glorious New “Ernani”: Chicago, November 5, 2009), I was amazed at the resonance of his voice in the War Memorial, which caresses a great voice, but is not always kind to some tenor voices of lighter weight. Those who write that when Placido Domingo retires, the era of great tenor voices will be over, just aren’t paying attention when Licitra sings.

Voigt and Licitra are savvy actors and their interplay in the second act made what might seem sentimental or melodramatic in the hands of others into an intensely rich theatrical experience.

[Below: Dick Johnson (Salvatore Licitra, left) pays a visit to the cabin in which Minnie (Deborah Voigt) resides; edited image, based on a Cory Weaver photograph, courtesy of the San Francisco Opera.] 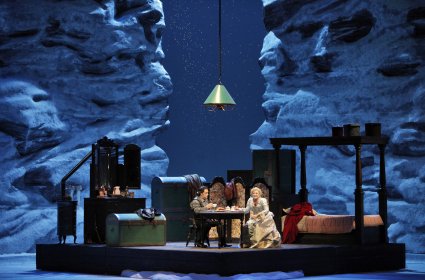 Superbly done, also, was what to many is the opera’s most memorable scene – the poker game in which the desperate Minnie cheats on cards and plays on the emotions of the hapless Rance to gain freedom for the first man for whom she has felt passion. Massimo’s stage direction here is magical, Minnie’s cabin splitting into three parts with its two ends moving to each side of the stage while the middle, in which the poker game is played, is the center of everyone’s attention.

Minnie, in my experience, has always been sung by great singing actresses, all of whom, once the outwitted Rance has left with his touch of grace,  end the second act with relish by throwing the deck of cards into the air.

The third act provides the mining community yet another chance to kill Johnson, and, about to be hung while standing on the coffin in which he is to be buried, he sings the opera’s great showpiece, Ch’ella mi creda libero, Licitra evoked the memory of two other great dramatic tenors, Sandor Konya and Placido Domingo, whose voices had resonated  throughout the War Memorial Opera House with this aria.

[Below: Dick Johnson (Salvatore Licitra, left) has been captured by a lynch mob consisting of, from the center left to right, Joe (Brian Jadge) Trin (Matthew O’Neill) and Sonora (Timothy Mix), and from the first row right end, Handsome (Austin Kness) and Harry (David Lomeli), and other miners (members of the San Francisco Opera Chorus); edited image, based on a Cory Weaver photograph, courtesy of the San Francisco Opera.]

Puccini had several years prior to writing “Fanciulla” considered composing an opera on a different subject which would have had a scene in which a soprano pleads with a mob for the life of her lover. No such scene exists in Belasco’s play, but the final scene of “Fanciulla” which incorporates that idea is brilliantly effective and affecting.

Voigt, with homage to Dorothy Kirsten who road horseback onstage as Minnie in the San Francisco Opera “Fanciulla” Golden Anniversary celebrations in 1960, road in astride a carriage horse (whose owners walked discreetly at its side).

In a successful display of lynch mob nullification, Minnie one by one plays on the emotions of each of the individual miners, and wins Dick Johnson for one last and final time. Mariani shows us yet another inspired stage effect to end the opera, the lovers bidding farewell to California and the Sierra snows.

[Below: Minnie (Deborah Voigt), here astride a Haflinger carriage horse (Whiz Kid), will call in her chits with each member of the mining community to save Dick Johnson (Salvatore Licitra, right) from hanging, frustrating his rival, Sheriff Jack Rance (Roberto Frontali, left); edited image, based on a Cory Weaver photograph, courtesy of the San Francisco Opera.] 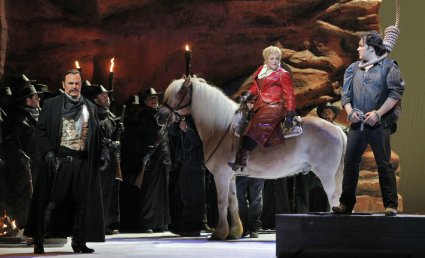 Serious, and even casual, operagoers who have resisted the charms of this masterpiece to date should invest the time to see a performance in this production, which I believe, should help this piece attain greater popularity.

The opera that Puccini wrote before this, “Madama Butterfly”, also based on Belasco, is the most popular 20th century opera. If, on more occasions, opera companies would forgo a season of “Butterfly” and mount “Girl of the Golden West” instead, audiences will find the genius of Puccini goes beyond those works with which they are most familiar.