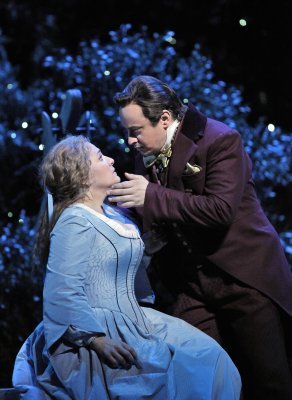 Gounod’s “Faust” returned to the San Francisco Opera stage after an absence of a decade and a half, in a Lyric Opera (Chicago) production by Robert Perdziola that is both resourceful and interesting. It proved the vehicle for displaying facets of the artistry of five San Francisco Opera-trained former Adler fellows, soprano Patricia Racette (Marguerite), basso John Relyea (Mephistopheles), character mezzo Catherine Cook (Dame Marthe), mezzo Daniela Mack (Siebel) and stage director Jose Maria Condemi. Buttressed by a strong performance as Valentin by Juilliard alumnus Brian Mulligan, the production was a showpiece for the depth of talent of American trained operatic artists.

[Below: Marguerite (Patricia Racette) stands in front of the silhouette of Mephistopheles (John Relyea); edited image, based on a Corey Weaver photograph, courtesy of the San Francisco Operal] 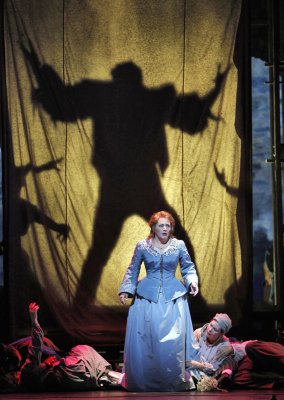 It was also a demonstration – welcome at a time when the projected costs of mounting new productions is vastly outstripping projected revenues – of how  previous physical investments in set construction can be recycled even though the audience is experiencing something new.

The core structure of the sets were designed by John Conklin for Rossini’s “Tancredi” for performances in the 1989 calendar year, built by the San Diego Opera Studios and co-produced by the Lyric Opera and Los Angeles Opera. (I attended its appearance in  L. A.)

In 2004, Lyric Opera, wishing to mount a new production of “Faust” for stage director Frank Corsaro, commissioned Robert Perdziola to convert the Rossini sets into something that would incorporate Corsaro’s famous ideas for staging “Faust” (of course replacing Michael Stennett “Tancredi” costumes with attractive new ones designed by Perdziola.)

In 2009 the Corsaro production was revived in Lyric Opera (see my review at  Lyric Opera Revives Inventive Corsaro-Perdziola “Faust”: Chicago November 3, 2009) at a time when Condemi was in Chicago mounting his production of Verdi’s “Ernani”. This gave Condemi an opportunity to see how Corsaro’s ideas fit with the Perdziola sets and costumes.  Since Condemi had drawn the assignment to stage direct “Faust” at San Francisco Opera. using the Perdziola sets and costumes, he thus was able to see how Corsaro’s ideas meshed with Condemi’s own thoughts about  how “Faust” should be staged. (See my  recent interview with Condemi at Rising Stars: An Interview with Stage Director Jose Maria Condemi, Part I.)

The San Francisco Opera program incorrectly listed Condemi as a “revival director” (an error it concedes). But this production is not a revival, not only because it is new to San Francisco, but because Condemi has fundamentally changed Corsaro’s conception of the work. Corsaro is a proponent of the proposition that Faust is a good man and joins Marguerite in heaven at opera’s end. Condemi believes that Faust is bad and must fulfill his contract with Mephistopheles. How you stage the opera depends on how you believe Faust spends eternity.

Many of the Corsaro Faustian ideas, most of which date back to his production during the Beverly Sills years at the New York City Opera, appear to be built into the Perdziola production and are retained by Condemi. After an authoritative orchestral prelude led by debuting Italian conductor, Maurizio Benini, the opera opens in Faust’s anatomical laboratory, with a knock on the door and a cadaver delivered at night.

Faust (Italian tenor Stefano Secco in his San Francisco Opera stage debut) despairs of his lifework, and he summons Satan (played by John Relyea), who appears, as one would expect the Devil to do,  supernaturally. If Secco seemed tentative in adjusting his light but stylish voice to the large War Memorial Opera House, Relyea, much of whose early training took place here, dominated the scene as Mephistopheles.

[Below: Mephistopheles (John Relyea) answers his summons; edited image, based on a Cory Weaver photograph, courtesy of San Francisco Opera.] 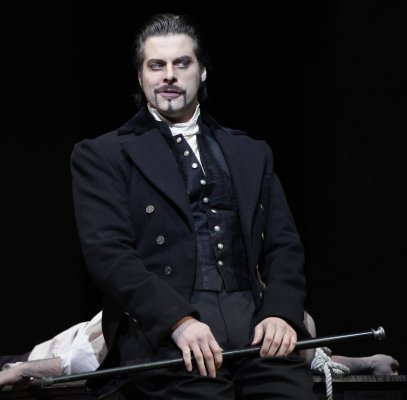 The transition from Faust’s anatomy lab to his parish church’s kermesse (the annual fairs that in those days celebrated a local church’s founding) was quick and smooth, with Relyea’s Mephisto wheeling in a small caravan and the local innkeepers hauling out a statue of Saint Sebastian (setting up another Corsaro idea).

Mulligan’s Valentin delivered an earnest and effective Avant de quitter ces lieux. Mulligan, whose work we have appreciated previously (See my review at The Luisotti “Boheme” in San Francisco – November 22, 2008 and Tom’s review of Braunfels’ “The Birds” in the April 2009 archives) has emerged as one the most impressive voices among the deep bench of American baritones.

[Below: Marguerite (Patricia Racette) gives a protective medallion to her brother Valentin (Brian Mulligan) who later throws it away just when he will need it the most; edited image, based on a Terrence McCarthy phtoograph, courtesy of the San Francisco Opera.] 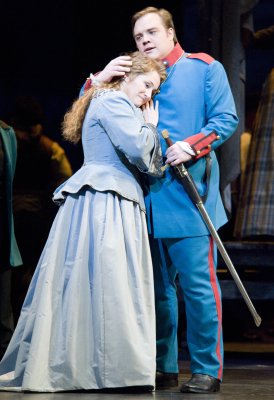 Wearing the most colorful of the suite of costumes that Perdziola designed for Mephistopheles, Relyea delivered a rousingly sung and spellboundingly staged “Calf of Gold”, the most famous example of a 19th century composer trying his hand at the  “devil’s gallop” music of medieval legend. Conductor Benini contributed to the spell by accelerating the music of the chorus rejoinder at each repetition.

[Below: Mephistopheles (John Relyea, center in commedia dell’arte costume) literally enchants Valentin’s soldiers and others of the populace; edited image, based on a Cory Weaver photograph, courtesy of the San Francisco Opera.] 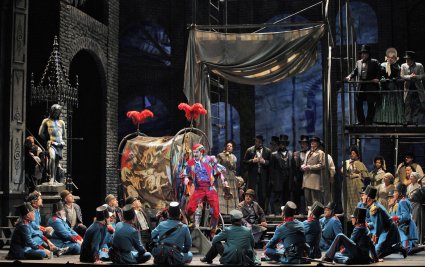 For the “Chorale of the Swords (De l’enfer qui vient)” Mulligan’s Valentin (like Bruennhilde gathering up the pieces of the sword Nothung for Sieglinde in Wagner’s “Die Walkuere”) picks the end of this broken sword off the ground and makes a sign of the cross.

A power field is created by the members of the chorus (mostly Valentin’s soldiers) either touching Valentin directly or placing their hand on another person to form an unbroken human chain from the cross-created magic. Relyea’s Mephisto cowers (or pretends to cower). But like two great wizards in Tolkein’s Lord of the Rings, the powers of good and evil seem equally matched and soon it is the village folks back under a magic spell as they dance a kermesse waltz.

After the first intermission, the stage is set for Marguerite’s garden, which Perdziola has attractively landscaped with towering shrubbery. Daniela Mack drew applause for Siebel’s flower song, as she did later in the opera, for her restored aria Si le bonheur a sourire t’invite, now, thankfully, regularly performed by the major American opera companies.

[Below: Siebel (Daniela Mack) checks to see whether a diabolical curse is working; edited image, based on a Cory Weaver photograph, courtesy of the San Francisco Opera.] 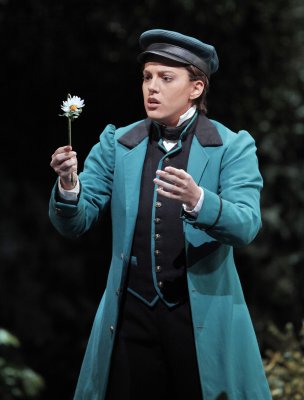 But the most striking singing was that of Patricia Racette. Marguerite is a role that is sung by sopranos of different vocal weights. But since it contains the most famous French coloratura aria, it is usually associated with voices lighter than that of Racette, who is most closely identified with the spinto heroine roles of Puccini. But Racette demonstrated that  she possesses a  spintovoice with  coloratura flexibility (she has sung both early Verdi and Rossini at San Francisco Opera). Those vocal skills, combined with Racette’s dramatic flair, permits the realization of an extraordinary portrait of this woman –  vulnerable, abused, but capable of taking her own forceful stand in the battle between the forces of Heaven and Hell.
[Below: Faust (Stefano Secco) uses the magic surroundings of the ‘nuit d’amour’ to seduce Marguerite (Patricia Racette); edited image, based on a Cory Weaver photograph, courtesy of the San Francisco Opera.] 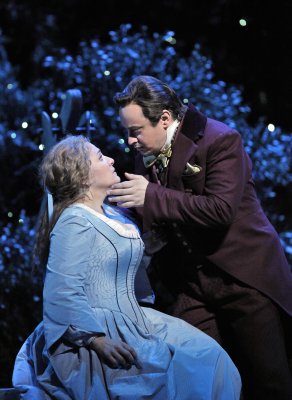 Racette, from the beginnings of her song of the legend of the King of Thule (which had preoccupied Goethe in his youth), was in command of this role, displaying the distractions and fantasies of a poor young woman unexpectedly accosted by a handsome, wealthy young man.

Then we experience through Racette Marguerite’s emotions – exuberance at finding the box of jewels; reasoning with herself it is all a mistake; her reaction to the man’s arrival, professing his love for her; her self-awareness that she must leave the situation before she succumbs to sexual passion; and then, her weakening and seduction.

We have moved into a new era of presenting “Faust” – one in which the Walpurgis Night scene (a later addition composed by Gounod as an arbitrary structure to add a ballet) is appropriately omitted, but one that restores the scenes that deal with the consequences of Marguerite’s pregnancy (including her spinning song, Siebel’s comforting aria and their interactions with  Valentin, returned from the wars). It is from these scenes that we understand that Marguerite’s affection for Faust is not unbounded, and she is fully aware that she has been cruelly abandoned.

Here Condemi most obviously departs form Corsaro’s ideas. In the church scene, Mephisto does reveal his cardinal’s cap, but Corsaro’s more obviously sacrilegious elements (especially a wall crucifix turning upside down) are eliminated. And the biggest change of all is Faust’s fate.

It was Corsaro’s idea that Marguerite, praying to heaven, saves Faust’s soul and the contract that Faust has signed with Mephistopheles bursts into flames.  But what happens after the final trio in this scenario is difficult to understand. How does one discern Heaven’s purpose in allowing the scoundrel Faust, who abandoned her and killed her brother – even if the Devil made him do it –  to enter heaven with her? Condemi’s reworking of the ending gives us a more satisfactory sense of Divine Justice.

[Below: Marguerite (Patricia Racette) is welcomed by the angels into Heaven, while she leaves Faust (Stefano Secco) to fulfill his contract in Hell; edited image, based on a Cory Weaver photograph, courtesy of the San Francisco Opera.] 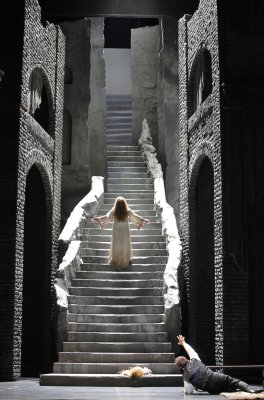 Gounod’s “Faust”, though eternally popular with audiences, has suffered over the decades with productions that have concentrated on presenting its succession of operatic showpieces, and have ignored or misunderstood the underlying dramatic strength of the work. Yet it is work that fits well with the 21st century interest in the fantasstic, while incorporating the eternal moralistic elements that illuminate the best of  the fantasy genre.

The production is an attractive one. One always likes to see Perdziola costumes, and the refurbished sets are arguably the best for “Faust” seen at this house. Racette’s work is a marvel, and Relyea, Mulligan and the cast in general is a strong one – a pleasant way to spend a summer evening (or afternoon) in San Francisco. I recommend it highly.

For some of my additional thoughts on the opera, see: The Devil’s Details Part II: Thoughts on Gounod’s “Faust” and also A “Faust” Surprise in Houston – January 23, 2007 .