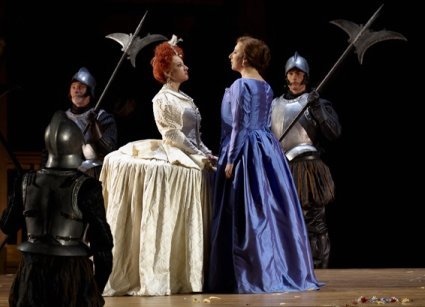 The Dallas Opera commissioned the team of Director Stephen Lawless and Belgian set designer Benoit Dugardyn to create three new productions around operas now known as the Donizetti “Tudor Trilogy”. Two of the three productions have been mounted – “Maria Stuarda” in Dallas in 2008 (here revived by the Canadian Opera Company in Toronto) and “Roberto Devereux”, shown in Dallas in January, 2009 (see The Donizetti Revival, Second Stage: Papian, Costello in Lawless’ Dallas “Devereux” – January 23, 2009.) This Fall, the third opera in the set, “Anna Bolena” will debut in Dallas.

The Stages of the Donizetti Revival

The operas of Donizetti were hugely popular in the 1830s and 1840s, then fell out of fashion, many of the operas having no performances at all for a century or more. When I use the term “second stage” to apply to the current generation of productions of Donizetti’s dramatic operas, my term suggests that the Donizetti revival’s “first stage” was the one begun in the late 1950s with Maria Callas and Leyla Gencer, later joined by Joan Sutherland, Montserrat Caballe and Beverly Sills. These sopranos began exploiting the bel canto repertory, championing works that were designed as vehicles for displaying virtuosity in coloratura singing.

During the 1960s and 1970s, much of the historically significant bel canto soprano repertory was explored, particularly by Gencer and Caballe. Some degree of understanding was achieved of the theatrical possibilities of several of Donizetti’s serious operas beyond “Lucia di Lammermoor” (the Donizetti opera that has not left the standard repertory since a “rediscovery” that occurred  towards the end of the 19th century).

But more recently, we have entered what I characterize as the second stage of the Donizetti revival, in which insightful stage directors have developed new ways to tell old stories, such as John Pascoe’s production of  “Lucrezia Borgia” for Washington National Opera, which demonstrates persuasively that what seemed the most improbable of plots makes sense if you portray Gennaro and Maffio Orsini as lovers (see The Donizetti Revival, Second Stage: Radvanovsky, Grigolo in Pascoe’s WNO “Lucrezia Borgia” – November 17, 2008.)

Commissioned by the Dallas Opera, Lawless and Dugardyn have revisited the idea, promoted by the New York City Opera, that Donizetti’s operas about Queen Elizabeth I’s mother, Ann Boleyn; her rival, Mary Stuart, queen of Scotland and France; and the last of her lovers, Robert Devereux, the Earl of Essex; constitute a three opera package.

They have designed a unit set inspired by London’s Old Globe Theatre and have developed a style of staging, with a distinctive approach to stage movement common to the two Lawless-Dugardyn productions that have premiered so far.

[Below: Queen Elizabeth I (Alexandrina Pendatchanska or Alex Penda) expresses suspicion of the feelings of the Earl of Leicester (Eric Cutler) for her rival, Mary, Queen of Scots; edited image, based on a Michael Cooper photograph, courtesy of the Canadian Opera Company. ] 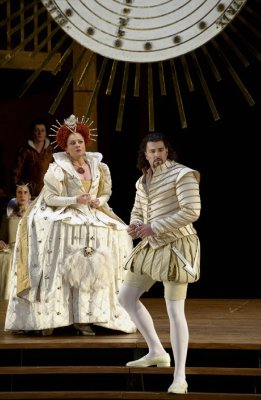 Perhaps the most felicitous 20th century innovation in producing Donizetti’s operas – certainly for American audiences – was the the New York City Opera’s packaging of the three Donizetti operas, roughly based on English history, and each starring Beverly Sills, as “The Tudor Trilogy”.

One may concede that “Anna Bolena”, “Maria Stuarda” and “Roberto Devereux” were neither conceived nor constructed by Donizetti as a “trilogy” (although one might rename the three as the “Tudor Beheadings” since the title character in each opera meets the same fate at the will of a Tudor monarch).

Even so, the brilliant NYCO “Tudor Trilogy” marketing strategy (promoted worldwide through EMI’s full length recordings of the three operas as a set) has proven to be a godsend for those who wish to see more frequent performances of Donizetti’s “beyond ‘Lucia’” dramatic works.

These Tudor tales are all “docu-operas” in the  sense that the major characters represent historical figures, usually famous persons quite familiar to the audience, who wear “period” costumes  (in this production benefiting from the handsome work of costume designer Ingeborg Bernerth). Like many a Hollywood movie, none of the operas are factually precise, and all dabble in historical fantasy.

However, no one comes to an opera house to research the history of the British Isles, and, even though no one will get very far defending Donizetti’s historical scholarship, the case can be made that he’s caught the essence and spirit of many of the relationships between these persons who lived over four centuries ago.

“Maria Stuarda” is one of the operas derived from the plays of Friedrich Schiller. The opera’a libretto is the only literary work of a teenager in Donizetti’s employ, rather than being written by one of the celebrity librettists who could make the creative process difficult for a composer.)

Schiller’s Mary Stuart and Bardari’s “Maria Stuarda” libretto provide material for a fascinating study of the historiography of the use of history in opera and of the performing arts. (For background on the opera, see my review at Jaho, Aldrich Triumph in San Diego “Maria Stuarda” – February 16, 2008.)

Lawless stresses the fact that each of the major characters has both a public and personal face that are in conflict. It is his intention to use stage movement that captures both their ceremonial roles and their private interactions out of the public view.

[Below: an empathetic Earl of Leicester (Eric Cutler) relates to the captive Queen Mary Stuart (Serena Farnocchia) that he believes a meeting between her and Queen Elizabeth would have positive results; edited image, based on a Michael Cooper photograph, courtesy of the Canadian Opera Company.] 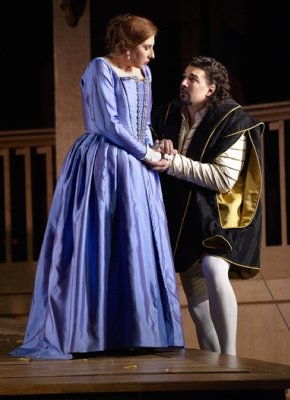 Conductor Antony Walker, who is one of the current generation’s most eloquent advocates for baroque, bel canto, and 19th century French opera, presented an affectionate reading of the opera. With his previous personal experience as an opera singer, he is a “singer’s conductor”, with appreciation for the subtleties required for creditable performances of these taxing roles. (See my interview with him at Interviewing Conductor Antony Walker on Undervalued Masterpieces – and His Unexpected Celebrity.)

The unit set represents the Elizabethan “Wooden O” theater referenced in prologue to the Bard’s Henry V. The chorus is often distributed among the theater’s three levels. In the center is a stage platform that is surrounded by bleacher-like steps and  seats. At the front of the stage is a curtain that Talbot (Patrick Carfizzi) pulls open to reveal the arrival of Queen Elizabeth (Bulgarian mezzo Alexandrina Pendatchanska, who also uses the name Alex Penda).

This website has remarked previously the extraordinary output over the past 60 years of first rate singers by Bulgaria, a country whose entire population is barely two thirds of the population of Los Angeles County. (See Power Verdi: Stoyanov, Valayre Mesmerizing in Berlin Staatsoper “Macbeth” – April 24, 2009.) Pendatchanska demonstrated a flexible coloratura voice, with the control to go from chest tones to soft, nicely controlled upper register legato singing. Conductor Walker permitted Pendatchanska, as I believe appropriate for contemporary artists performing bel canto and Early Verdi works,  to sing the both verses of her cabaletta Ah dal ciel discenda un raggio with its intervening choral stretta.

Both principals and chorus members are enlisted to open and close stage curtains and other business to permit rapid shifts from scene to scene. This permits the opera to be performed with only one, rather than two intermissions. Such a division allows the first act to include the first appearance of Mary (Italian soprano Serena Farnocchia), the sextet whose final passages presage the “Lucia” sextet from one of Donizetti’s next operas, and the famous confrontation between the two queens. With Maria’s famous prayer occuring in the second act, it nicely divides the showpieces between the two acts.

[Below: Queen Elizabeth I (Alexandrina Pendatschanska or Alex Penda) is insulted by her condemned captive, Mary, Queen of Scots (Serena Farnocchia); edited image, based on a Michael Cooper photograph, courtesy of the Canadian Opera Company.] 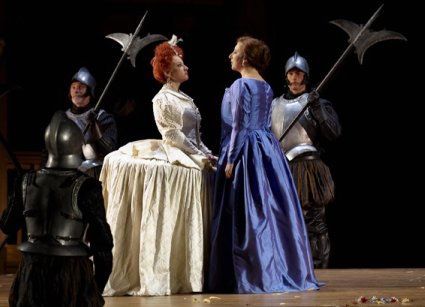 Eric Cutler is one of the most stylish of contemporary leggiero tenors, and is a gleaming example of just how deep the talent is among American tenors with the vocal weight and flexibility appropriate to Donizetti’s operas. I believe there is an imperative for American opera managements to invest in credible productions of Donizetti’s works, and to educate audiences on just how enjoyable a night at a Donizetti opera can be, because  there are now more great Donizetti singers available than there are performances to display their talents.

With due respect for the well-deserved superstar status of Juan Diego Florez, who is one of the artists capable of selling out performances of bel canto works, audiences should be rushing to secure tickets to any of Cutler’s future performances, especially of bel canto and French operas, for his free and open tenor sound gives full expression to arias written for 19th century tenor superstars.

Similarly, Patrick Carfizzi, the here youthful Talbot, has emerged as a superbly sounding baritone, capable of both the flexibility of Donizetti’s works and the heavier dramatic roles, such as that of Paolo in Verdi’s “Simon Boccanegra”.

The other male role was sung by bass-baritone Weston Hurt as Lord Cecil. Again, a part that in the past might have been assigned to a comprimario singer, but with the wealth of current singers available to opera managements, invites the casting of a voice of  star quality. Having a larger voice in this role effectively underscored the dramatic impact on Elizabeth I of Protestant militancy among her advisors.

[Below: Lord Cecil (Weston Hurt, left) debates Leicester (Eric Cutler) as to whether Queen Elizabeth (Alexandrina Pendatchanska) should grant a reprieve for Queen Mary’s execution; edited image, based on a Michael Cooper photograph, courtesy of the Canadian Opera Company.] 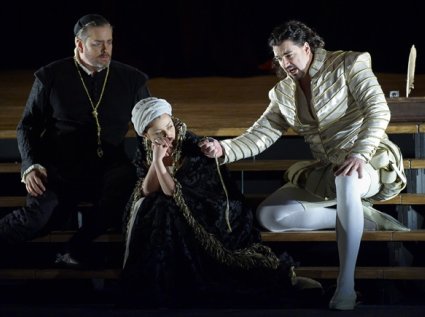 Ultimately, however, for “Maria Stuarda” to work as it should, you need an impressive performance in the title role and Serena Farnocchia provided one to the Toronto audiences. Farnocchia, who has a beautifully sounding, even vibrato and coloratura fireworks, fulfilled the expectations of this role. Hers was a full rounded portrayal that displayed both Mary’s often passive nature as well as the injudicious, fiery temperament (hurling the vil bastarda! epithet at the Tudor sovereign, which did nothing to improve the Scottish queen’s situation).

Veteran “Maria Stuarda” partisans will wait to hear whether the lead soprano sings her long phrase over the chorus’ second repetition of the main theme of Deh! Tu di un umile preghiera with just one gulp of breath. From that point Maria begins a ten measure phrase (a single G note over seven measures that rises in a crescendo to high B flat), Farnocchia, with  assistance from Conductor Walker in balancing chorus and orchestra, did appear to take a discreet breath midway, allowing the more intense fans of this opera something to argue about, but without diminishing the showpiece’s appeal to the overall audience.

The Canadian Opera Company should be proud of the cast and crew assembled for this work, that fully deserves its growing reputation among opera fans, as does the contribution of the Dallas Opera Company to the evening, through their investment in the Lawless and Dugardyn approach to the opera.

[Below: Talbot (Patrick Carfizzi), who has hidden the elements needed for a Catholic communion in the prison floorboards, provides holy communion to Maria Stuarda (Serena Farnocchia); edited image, based on a Michael Cooper photograph, courtesy of the Dallas Opera.] 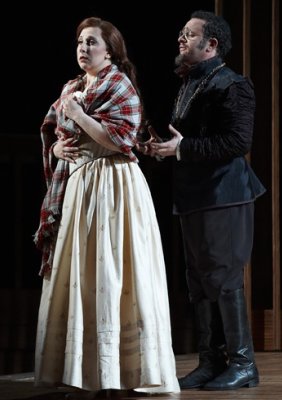 Those near Toronto should schedule the later performances, and all opera goers should consider plans to attend performances of the new Lawless-Dugardyn production of  “Anna Bolena” at the Dallas Opera this fall. Both the opera houses of Toronto and Dallas have been recently constructed, both employing some of the most advanced acoustical theories and techniques. Donizetti’s music never sounded livelier and more vibrant than in Toronto, and one looks forward to hearing the next in the series at Dallas’ new Winspear Opera House.

For links to this website’s ongoing attention to key Donizetti productions in the North America and elsewhere, see: In Quest of Donizetti – A 2009-10 Update.