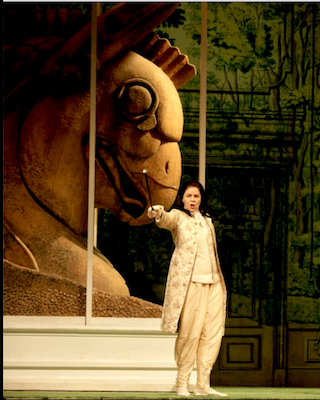 Strong bonds have developed between Houston Grand Opera and the opera community of Great Britain – from whence HGO’s general director Anthony Freud, OBE, came. These bonds were further evident with the importation of one of the English National Opera’s most celebrated Handel productions, under the musical leadership of British conductor William Lacey.

Performed uncut and incorporating Lacey’s most recent studies of Handel’s original score and source material, Houston mounted the work with an almost completely American cast (excepting only the superb Italian contralto Sonia Prina) – one that Lacey described as perhaps the best cast ever assembled to perform a Handel work.

The title role was sung by American mezzo Susan Graham, with yet another triumphant performance of an 18th century work. (For my review of another such assignment, see Night at the Museum: “Iphigenie en Tauride” Springs to Life in S. F. – June 17, 2007, For a review of Graham in a performance of another Handel opera with Sonia Prina, her colleague from this production, see Graham, Swenson, Prina Luminous in S. F.’s Stellar “Ariodante” – June 15, 2008.)

[Below: King Xerxes (Susan Graham) admires a plane tree he has had potted; edited image, based on a Felix Sanchez photograph, courtesy of the Houston Grand Opera.]

Xerxes’ brother Arsamenes was played by the estimable David Daniels, who has had much to do with the establishment of the counter-tenor as the legitimate heir of the vocal parts written for the now vanished  castrati. No longer can one imagine a major opera company producing an opera by Handel with roles written for soprano castrati transposed to the ranges of baritones or basses.

Daniels’ character is one who is pursued by two women. One is Romilda, performed by coloratura soprano Laura Claycomb, in yet another distinguished performance at the Houston Grand Opera. (See my review of her Marie in Claycomb, Podles, Banks Shine in Houston “Fille du Regiment” – November 3, 2007, For my review of her contribution to Houston Grand Opera’s cycle of Benjamin Britten works, see  Incandescent Houston “Midsummer Night’s Dream” – January 25, 2009.)

The other sister pursuing Daniels’ Arsamenes was the Atalanta of Houston Grand Opera Studio alumna Heidi Stober. The remaining members of the seven person cast were the intentionally funny roles – Philip Cutlip as the stuffy general who is the father of the two sisters and Houston Grand Opera Studio Fellow Adam Cioffari as Arsamenes’ servant Elviro, the latter perhaps the best developed comic character in a Handel opera.

[Below: Atalanta (Heidi Stober, left) begs Arsamenes (David Daniels) to love her instead of her sister Romilda (Laura Claycomb, right); edited image, based on a Felix Sanchez photograph, courtesy of Houston Grand Opera.] 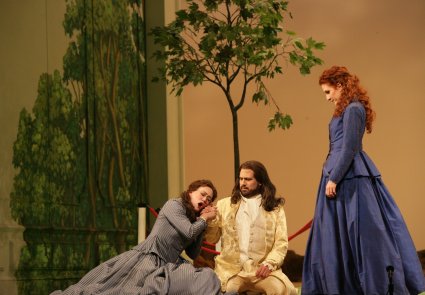 The ENO production was the venerable one created by Nicholas Hytner (as of the 2010 Queen’s List the knighted Sir Nicholas). Now a quarter century old, the production is as fresh and witty as ever. This website has argued that there needs to be worldwide mechanism for identifying “heritage” opera productions and assuring that plans exist for their preservation for future generations to enjoy in live performance. The Hytner “Xerxes” would certainly be one of our nominees for the charter list of such esteemed works of art. The production’s sets and costumes were created by David Fielding and the revival was under the direction of Michael Walling.

The opera’s story is a reworking of the libretto of a long forgotten 17th century opera based on the tall tales that had been spun by Greek historian Herodotus and dramatists from later times about an historical Persian king, who was son of the archenemy of Athens, Darius the Great.

Handel’s version of the Xerxes story appears to have confused his contemporaries (although only two accounts of any of its five performances during Handel’s lifetime exist), since, at the time, prevailing taste dictated that comic elements would not appear in serious operas written in the Italian style.

As the Handel revival of the past nine decades has accelerated (the sixth performance of the opera of all time occurred in the 1920s), several commentators have seen the “Xerxes” mix of serious and comedic elements as a precursor of Mozart’s operas. Although Mozart would not have known about Handel’s work, his “Don Giovanni”, in which comedy is mixed with high drama, followed “Xerxes” by only 49 years. To put this time interval in perspective, Floyd’s “Susannah”, that many opera-goers would still regard as roughly contemporary, is 54 years old this year.

From a 21st century perspective, one can see that, rather than this being an opera seria with incongruous comedic characters grafted into the action, the entire opera can be played tongue-in-cheek. Of course, playing Handel too broadly can be perilous. But Hytner’s approach to “Xerxes” is not only  light-hearted, it is an affectionate homage to bourgeois London of Handel’s time.

Thus, every element of the physical production – from the look of the stage settings to the costumes – has a strong association with Georgian Britain in the first half of the 18th century, and only the weakest of links to the world of Xerxes (distant ruins of Persepolis, Persian statuary in museum display cases, sight gags that refer to Herodotus’ accounts of Xerxes’ attraction to a particular plane tree and his plans to bridge the Dardanelles). The passions of the British middle class during the time of the Hanoverian kings are parodized – the eclectic pursuit of knowledge through the collection of artifacts and specimens, the passion for reading newspapers on a daily basis.

The chorus has little to sing in “Xerxes” but the choristers themselves have quite a bit to do. In most scenes the women and men of the chorus are dressed mostly in grey with headdresses that resemble ones that Handel is seen wearing in a familiar portrait. They are ubiquitous, sometimes in small groups, sometimes as a larger assemblage. They will collect, and seat themselves to study the encased specimens or read the latest social commentary from Addison in the daily Spectator, or will wander throughout the scenes, silently interacting with the main characters.

[Below: Atalanta (Heidi Stober, left) and Romilda (Laura Claycomb, right) join women of the London bourgeois class in the new passion for studying museum specimens, such as this plane tree; edited image, based on a Felix Sanchez photograph, courtesy of the Houston Grand Opera.] 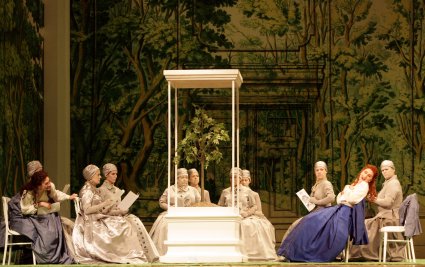 Beyond the principals and the chorus of gray are a group of impeccably mannered, bald-pated men who appear to be performing the functions of footmen, valets and other men of the “upstairs” servant class, but have this production’s function of moving the major stage props – the museum specimen cases, the rope barriers, the lawn chairs and other furniture – permitting a rapid flow of scenes.

Lacey, who both conducts and plays the harpsichord (one whose sound is authentic to Handel’s time), has worked with the Houston Grand Opera orchestra, which has experience with baroque music, to emulate as closely as possible the sound from a different age.

He brought Michael Leopold with him. Leopold is  a virtuoso on the theorbo, the large lute-like stringed instrument that is a distinctive feature of the continuo sections of the baroque pieces that Lacey conducts. (For my review of another Handel opera conducted by Lacey, with theorbo present, see: Domingo’s Towering “Tamerlano” Bajazet: Los Angeles Opera – November 22, 2009.)

The decision by Lacey and Houston Grand Opera to present “Xerxes” uncut pushes the envelope in 21st century Handel performance. To an extent, the opera is regarded as the “safest” major Handel opera for such an endeavor, with its succession of shorter arias and its entertaining comic episodes. The high-spirited and always interesting Hytner production immeasurably improved the chances for a modern audience’s approval of the presentation of the opera complete.

Even if shorter than other major Handel works in which the long da capo arias are the principal feature, an uncut “Xerxes”, with two quite necessary intermissions,  lasts three and a half hours. But the Houston audience got its money’s worth and obviously enjoyed the show.

[Below: Xerxes (Susan Graham) gestures next to his display case for a Persian artifact; while Romilda (Laura Claycomb) is engaged in conversation by two men of the upper middle class; edited image, based on a Felix Sanchez photograph, courtesy of the Houston Grand Opera.] 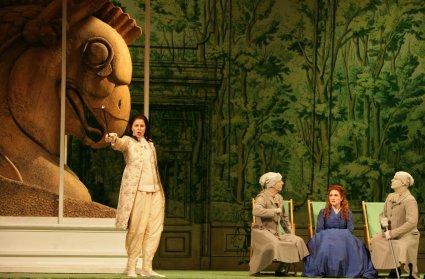 However, ultimately it was the fine cast of seven singers that assured the production’s success.  The performance was graced with the memorable “co-starring” performances of David Daniels, for Arsamenes’ succession of hauntingly plaintive arias of great beauty; of Laura Claycomb, whose characterization of Romilda is another triumph in this coloratura soprano’s career; and of Sonia Prina, who brought high sprited acting and her astonishing contralto virtuosity to the role of Amastris.

Additionally, Heidi Stober’s Atalanta and Philip Cutlip’s Ariodate benefited from the comic timing that accompanied their solid vocal performances, while bass-baritone Adam Cioffari, the Elviro, whose role’s inherent comedy was particularly physical in this production, has a voice that suggests he is at the beginning of a major operatic career.

But for an uncut “Xerxes” to be successful, one must also have the services of a great singer in the title role. Having seen performances both of Susan Graham’s last two productions (see also my review of her “Damnation of Faust” Marguerite in Berlioz’ Faust Fantastique: Lyric Opera Does “Damnation” – Chicago, March 8, 2010), I am impressed by Graham’s technical competence, beautiful sound, and her sensitivity to the sophisticated mastery of the diverse styles Handel, Gluck and Berlioz.

The Houston “Xerxes” was an extraordinary evening in the theater, and is strongly recommended.