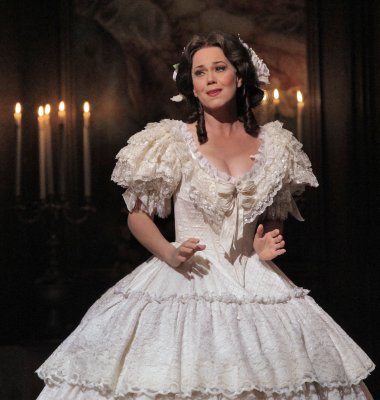 We are three years from the worldwide bicentennial celebration of the birth of the great Italian opera composer, Giuseppe Verdi. In the countdown to the bicentennial, San Diego Opera’s 2010 Season presented two of Verdi’s great successes  – an utterly smashing production of the 29 year old Verdi’s first big hit, “Nabucco” (championed and conducted at its Austrian premiere by a luminous mentor – 16 years his elder – the prolific composer Gaetano Donizetti – famed for “Lucia di Lammermoor” and the comic-scream “Don Pasquale”. For more on contemporary Donizetti productions, see In Quest of Donizetti – A 2009-10 Update.)

Closing the San Diego Opera’s 2010 season is Verdi’s beloved “La Traviata” written a decade after “Nabucco” when the 40 year old Verdi was at the apotheosis of his youthful powers. The opera debuted March 6,1853 , just six and a half weeks after the premiere of his fabulous “Il Trovatore”, seen in San Diego in 2007. The premieres of these two operatic blockbusters occurred just over a year after his first universally acknowledged masterpiece, “Rigoletto” (performed last season at San Diego Opera).

Many regulars in the San Diego audience commented (as also heard from prior audiences in this production-run) that this may well be the most visually opulent operatic production San Diego has ever seen (with which I agree), the sets and costumes coming from (and owned by) the San Francisco Opera.

John Conklin, the set designer has done some 12 productions seen at San Diego Opera, in addition to all his productions at the Met, Lyric Opera (Chicago), San Francisco Opera, Santa Fe, and English National Opera. With a production like this, he’s more than just welcome in San Diego!

[Below: Elizabeth Futral as Violetta; edited image, based on a Ken Howard photograph, courtesy of the San Diego Opera.] 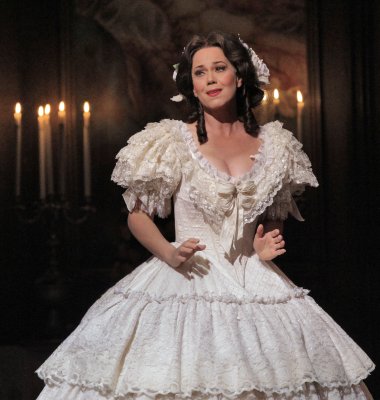 Opposite Futral as Alfredo Germont (the significant other) was Rumanian tenor Marius Brenciu making his house debut. Brenciu has vast European experience including the estimable Deutsche Oper Berlin, Staatsoper Unter den Linden (Berlin) and Staatsoper Hamburg, as well as at the Met. 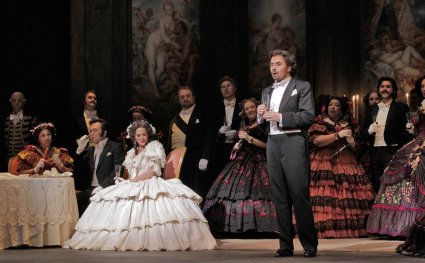 His grumpy Dad, Germont Senior, is Cornish baritone Alan Opie, coming with a loaded portfolio of British experience at the renowned English National Opera (ENO), with Captain Balstrode in Britten’s “Peter Grimes”, among many many assignments.

[Below: The elder Germont (Alan Opie) pleads with Violetta (Elizabeth Futral) to break off her relationship with his son; edited image, based on a Ken Howard photograph, courtesy of the San Diego Opera.] 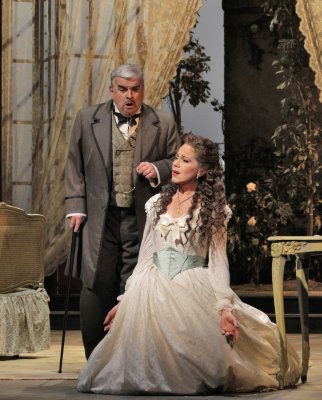 Your website host William, has called San Diego Opera a “Verdi-friendly” company whose productions one can expect to be respectful of the master. He reviewed the “Nabucco” production and interviewed Raymond Aceto, its Zaccaria, who super-starred in this year’s production as Zaccaria. Aceto stole the show to tumultuous applause! (See Fink, Valayre and Aceto in San Diego Opera’s Exceptional “Nabucco” – February 20, 2010 and Rising Stars: An Interview with Raymond Aceto, Part I.)

But “Nabucco” and Verdi, himself personally, have more in common than might meet the eye: a certain opera soprano by the name of Giuseppina Strepponi starred in the premiere La Scala performance of “Nabucco” in the role of Abigaille.  Shortly thereafter Strepponi became Verdi’s live-in lady-friend and ultimately his wife four years after he wrote “La Traviata!”  (Want to know more? See the excellent/detailed/well-acted DVD set The Life of Verdi profusely photographed with glorious music, filmed on location, shown on Public TV, with Maria Callas, Luciano Pavarotti et al. originally priced at $149, but recently seen at $32 at Blockbuster).

But there’s more: as you know our website’s name is Opera War Horses, and if ever there was one to fit this bill it’s got to be “La Traviata”, one of the most popular operas ever, presented in every opera house around the world with regularity. In North America it is consistently the most performed Verdi opera. It helps today in a very big way to pay the rent in those opera houses.  (Thank you very much !!)

“La Traviata’s” story-line follows the Alexander Dumas novel La Dame aux Camelias (The Lady of the Camellias) closely – and virtually every production has her wearing a camellia in the hair or on the bodice (we show San Diego Opera’s white camellia-inspired ball gown), but traviata means a “Fallen” or “Wayward” or “Misguided” woman – not the very grande dame we’re all used to seeing on stage around the world.

At the time, she was a “kept woman” –  a demi-monde (shady-lady) mistress to some rich bloke. In today’s world, she’s hardly a strumpet. We’re not the least bit shocked by her lifestyle, but at the time 157 years ago, the beau monde bourgeois upper classes featured in “La Traviata” were appalled.

This is so clearly seen in the second scene when Germont, father of her then-boyfriend Alfredo, with whom she was living “in sin” (i.e. without benefit of clergy) in a Paris country house, comes to plead with her to disappear and leave the family’s reputation without her blemish. She tearfully agrees, writing a letter to her erstwhile lover in an act ending in unforgetable emotion-wrenching scenes.

Is It An “Overcast” Evening At San Diego Opera?

The stage director was Andrew Sinclair, who is an Aussie, as is San Diego Opera’s General Manager, Ian Campbell. Sinclair debuted here in 2000 with a smashing Wagner “Lohengrin” (I saw it twice), then Verdi’s “Aida” in 2001, Bizet’s “Pearlfishers” in 2004 and 2008 (which he also did with the San Francisco and New York City Operas). In 2008 he directed the spectacular performances of Donizetti’s “Mary, Queen of Scots (Maria Stuarda)” here in 2008 as well as 2008’s production of Puccini’s “Tosca“, with time off to do Wagner’s “Lohengrin” at Wagner’s own theatre in Bayreuth!!

Supporting the three principals – Futral, Brenciu and Opie – was a deeply cast ensemble.  The Marquis d’Obigny (think the raucous card game and his white gloves-across-the-mug duel-challenge to Alfredo) is long-time San Diego Opera artist Scott Sikon who has done more than 20 roles here, starting in 1991 in Britten’s “Albert Herring”. 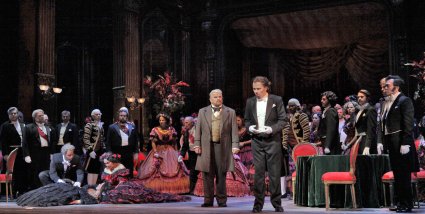 The medic, Dr Grenvil, is American bass-baritone Kristopher Irmiter, whom we saw last season as Ned Keene in the gut-wrenching San Diego Opera production of Britten’s “Peter Grimes”. Irmiter’s curriculum vitae includes some 90+ roles in 45+ operas – (not a rookie!).

American baritone Nicolai Janitzky was the Baron Douphol. He made his company debut here in Janacek’s “Katya Kabanova”, and then was seen in the marvelous production of Mussorgsky’s “Boris Godounov” (which I also saw twice!). A graduate of Santa Fe Opera’s Apprentice Program, Janitzky sang the title role there in Tchaikovsky’s “Eugene Onegin”, in which I thought he was sensational.

[Below: the dancers at Flora’s party; edited image, based on a Ken Howard photograph, courtesy of the San Diego Opera.] 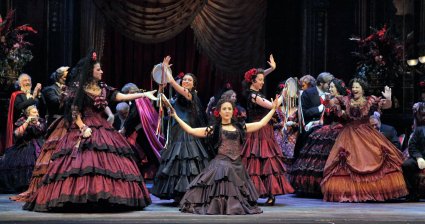 And on the podium, having recovered from an illness that sidelined him the previous Saturday for his anxiously anticipated San Diego Opera debut – is Italian conductor Renato Palumbo, who led his first opera at age 19 as a Wunderkind (and what were you doing at 19) who has conducted everywhere in Italy, when he wasn’t busy in Berlin, Tokyo, Chicago, England, etc.

No, I submit it’s not an overcast evening with a cast like this!  I see stars!!

Our ill-fated heroine Violetta shares her final destiny and fate in common with the heroines in two other operas San Diego Opera is presenting this season: She expires at the end in the arms of her lover to exquisitely lush music – as is true of  Mimi in Puccini’s “La Boheme” and Juliet in this year’s Gounod’s “Romeo and Juliet”. (See my review of the former at Piotr Beczala, Ellie Dehn, Priti Gandhi Stunning in San Diego “La Boheme” – February 5, 2010 and William’s of the latter at Costello, Perez in Passionately Romantic “Romeo et Juliette” – San Diego Opera, March 13, 2010.)

Thus the season is tied together in so many intricate ways for those of us who love this, the greatest (and most expensive) show on earth – opera!!

[Below: Violetta (Elizabeth Futral) is comforted by Alfredo (Marius Brenciu) as Doctor Grenvil (Kristopher Irmiter), Annina (Rebecca Skaar) and the Elder Germont (Alan Opie) lose hope that she will survive; edited image, based on a Ken Howard photograph, courtesy of the San Diego Opera.] 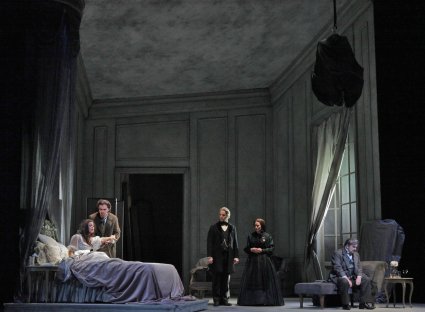 Glorious music ends all three pieces – the duet between Alfredo and Violetta at the very end being, to me, one of the most heart-rending lover’s duet in all Italian opera, bringing the curtain down magnificently – to a magnificent San Diego Opera season!