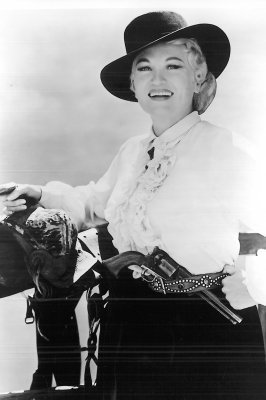 Note from William: This post continues my series of observances of historic performances that I attended at San Francisco Opera during the general directorship of Kurt Herbert Adler. This is the third of five such observances of performances from the company’s 1960 Fall season.

2010 is a year of two centennial celebrations, the 100th anniversary of the birth of spinto soprano Dorothy Kirsten in July, 1910 and five months later, the first performance, at the Metropolitan Opera in New York City, of Puccini’s “Girl of the Golden West (La Fanciulla del West)”.

In 1960, the San Francisco Opera celebrated the 50th birthdays of Kirsten and “Fanciulla”, with a revival of the opera for the famous soprano. The performances were Kirsten’s role debut, and also provided the opportunity for the American debut of Hungarian tenor Sandor Konya and the return of Tito Gobbi to the San Francisco stage, after the absence of a dozen years.

[Below: Dorothy Kirsten as Minnie, the Girl of the Golden West; edited image, based on a photograph, courtesy of the San Francisco Opera.] 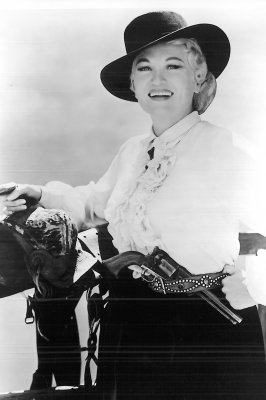 I look forward to attending the opera’s centennial celebrations at San Francisco Opera this June in which Deborah Voigt is to be the Minnie, Salvatore Licitra the Dick Johnson, and Roberto Frontali the Sheriff Jack Rance. The S. F. Opera’s War Memorial Opera House was the very place where, as a teenager, I saw my first live performance of Puccini’s enchanting operatic adaptation of David Belasco’s play about an unexpected love affair during the California Gold Rush. It was also the “Girl of the Golden West’s” Golden Anniversary.

Kirsten was one of the great operatic actresses of the 20th century, carrying on the American tradition of celebrity opera stars, who moved between the opera house, Broadway theater, radio and television. (An extended discussion of her performances at San Francisco Opera is contained in my 50th anniversary observation of my first live performance of Puccini’s “Madama Butterfly”, which appears at Historical Performances: “Madama Butterfly” with Kirsten, Campora, Quilico, Roggero – San Francisco Opera in San Diego, November 1, 1956.)

Kirsten continued to perform many of the roles of her most famous mentor, Grace Moore, 12 years her senior, whom I believe is the only Metropolitan Opera star to be nominated for an Academy Award for best actress (in 1934, when only three actresses were nominated). Moore, at the height of her fame, died in a airplane crash in 1947.

Kirsten was an under-recorded artist, but a fragment of her performance as Minnie survives from the final year (1962-63) of ABC-TV’s “The Voice of Firestone”. It is the Act II Poker Scene in which Minnie – the end in her eyes justifying the means – cheats at a card game with the local chief law enforcement officer, to save the life of the outlaw she is harboring. Her Sheriff Rance for the Voice of Firestone performance was Mario Sereni, but in San Francisco it was a much more famous dramatic baritone, Tito Gobbi.

Gobbi (like Konya a dozen years later) made his American debut at the San Francisco Opera in 1948 (three years after Kirsten’s debut in San Francisco). Then, Gobbi was a 35-year old bel canto baritone. Belcore in Donizetti’s “L’Elisir d’Amore” had been his signature role during the World War II and early postwar years. His American debut role was Figaro in Rossini’s “Barbiere di Siviglia”.

But during the 1950s, Gobbi took on the dramatic baritone roles, including Jack Rance. Verdi and Puccini loved to write the “villain” roles in their operas for a mature baritone voice  and the “hero” roles for a tenor with vocal heft. But Rance is arguably a more subtle character than some of the truly “bad guys” that Gobbi portrayed, such as Scarpia in Puccini’s “Tosca” or Iago in Verdi’s “Otello”.

Rance is after all the police force in a territory many of whose towns are lawless. With the valuable assistance of Minnie, his town has been civilized, and the appearance of “wanted dead or alive” outlaws in town is not something he can overlook. Of course, his self-respect is totally undermined when the town’s most respectable woman (for whom he has strong feelings) falls in love with the outlaw he is bound by duty to arrest, and who then persuades Rance to enter into an illicit conditional bargain against his better judgment, and then cheats him to get her way.

A “stand and sing” baritone cannot achieve the depth of character that Puccini wrote into this role, but a superb actor can – and Gobbi was unparalleled in expressing the emotions that underlie this great baritone dramatic role.

[ Below: Tito Gobbi as Jack Rance in Puccini’s “La Fanciulla del West”; edited image, based on a photograph, courtesy of San Francisco Opera.] 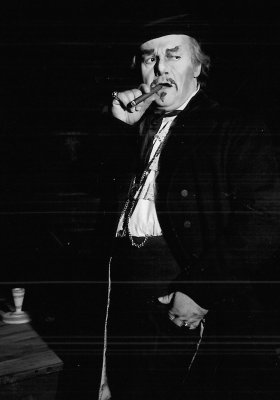 In the 1950s and 60s, the major classical recording companies heavily promoted the singers associated with their complete operas. Gobbi was closely associated with Maria Callas, performing with her, and joining her in the historic series of EMI operatic recordings.

Once, when I was a teenager I sent a question to the Metropolitan Opera broadcast intermission quiz (the only time I ever submitted a question) which they used. The question asked the panelists to identify operas from musical passages from the score that are playing when the libretto calls for the characters to ride horses onstage. One such opera, of course, is “Fanciulla”, but most opera companies are leery of actually using real horses, particularly being ridden onstage by major operatic stars. But Kirsten was not about to give an inauthentic performance, so her third act appearance was astride a horse. 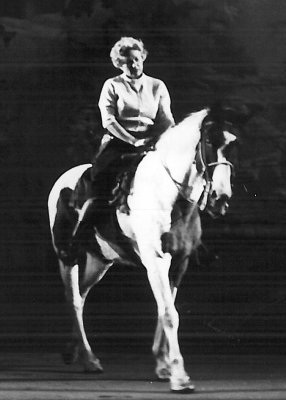 Just as it is impossible to envision a wholly successful performance of “Fanciulla” without a baritone who can act, technical acting skills are even more a requirement of the Minnie. The San Francisco Opera has been fortunate to have had three distinguished singing actresses perform the role over the past half century. (It was Australian soprano Marie Collier’s role debut in 1965 and Carol Neblett sang it in 1979, with Placido Domingo as Dick Johnson.)

Kirsten not only brought her secure spinto voice, with its ringing, famously on-pitch high C’s, but a cinematic acting style. As Minnie, Kirsten acted as naturally as one would expect in a Hollywood movie, with the small details in how she gestured or interacted with the large cast of miners, each of whom is written with his own personality.

[Below: the “school marm” at a mining camp, Minnie (Dorothy Kirsten) creates a bond with miners that she teaches; edited image, based on a photograph, courtesy of the San Francisco Opera.] 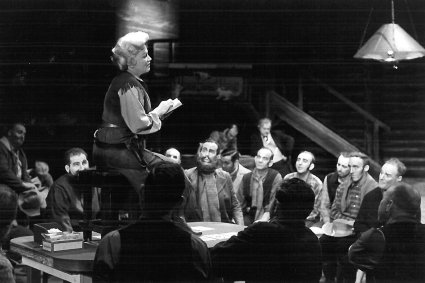 When the audience can believe that Minnie has created a rapport with the men of the town that will allow her to get her way, then that audience can empathize with her, as she rides with Sandor Konya’s Dick Johnson into the Sierra snows and perhaps the happiest ending in Italian dramatic opera.

[Below: Because Minnie (Dorothy Kirsten) has selflessly served the mining camp, she requests that they honor an important request she will make of them; edited image, based on a photograph, courtesy of the San Francisco Opera.] 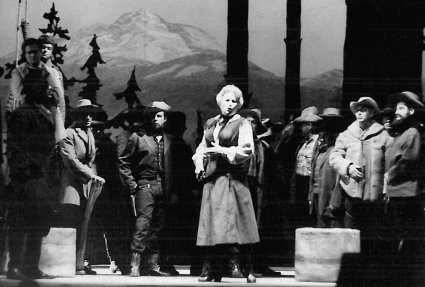 As noted above, “Fanciulla” was also the occasion for the American debut, in the role of the outlaw Dick Johnson, of 37 year old Hungarian tenor Sandor Konya, the first of six consecutive seasons in which Konya dominated the spinto and dramatic tenor roles at San Francisco Opera. Konya possessed a glorious voice well suited to the acoustics of War Memorial Opera House, in which a large tenor voice resounds.

[Below: Calling in her chips with the mining camp, with pleading and persuasion Minnie (Dorothy Kirsten) rescues Dick Johnson (Sandor Konya) from hanging; edited image, based on a photograph, courtesy of the San Francisco Opera.] 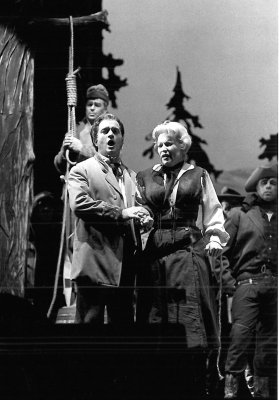 Versatile performing in several languages at a time when many European artists specialized in the operas of a certain language, Konya was the first tenor I saw in live performance in the title roles of Wagner’s “Lohengrin” (1960) and “Parsifal” (1964).  But it was the big Verdi and Puccini roles with which he was most often associated in San Francisco.

The only roles he performed at San Francisco in which I never saw him was a Rodolfo in Puccini’s “La Boheme” and Faust in Boito’s “Mefistofele”.  In 1965, he and Price opened the San Francisco Opera season in Los Angeles in “Ballo” at the new Dorothy Chandler Pavilion . Konya did not return to San Francisco after the 1965 season, except for a single performance in 1974, to my delight a Sunday matinee on my subscription series to replace an indisposed tenor. This was an occasion for him to sing Pinkerton to the Butterfly of Pilar Lorengar, a colleague from San Francisco Opera’s 1964 and 1965 season.

The centennial of “Fanciulla” will be celebrated at the Metropolitan Opera on its centennial anniversary date (conducted by Nicola Luisotti with Deborah Voigt as Minnie) and at the Lyric Opera in Chicago (conducted by Sir Andrew Davis, again with Voigt.) Centennials will be observed in Sydney, Australia, in Palermo, Italy and elsewhere. These performances will give opera goers a chance to reflect on the observation of the late Julian Budden, the distinguished scholar of Verdi and Puccini operas, that suggests that “Fanciulla del West”, which he, as I do, believed the world has under-valued, is one of the greatest masterpieces of Italian opera.

The Girls of the Golden Gate

There is a special significance to the Centennial celebrations beginning in San Francisco, the world city that was created by the Gold Rush. This is an excellent excuse for one to spend time this June in San Francisco to hear the former San Francisco Opera Adler Fellow, Deborah Voigt, perform the magnificent role of Minnie, fifty years after another great soprano, Dorothy Kirsten – whose operatic career reached a new plane after her debut at the San Francisco Opera – performed her first Girl of the Golden West.