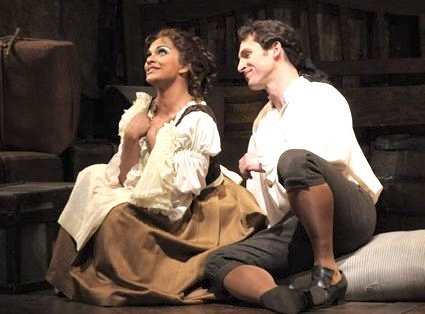 German soprano Anne Schwanewilms, battling a stubborn case of bronchitis during her first three performances of the Mozart opera in the role of the Countess Almaviva, finally gave in to the need to treat the infection properly and returned to Europe, withdrawing from the remaining eight performances. The Lyric Opera administration secured the services of Nicole Cabell as Countess for the final six, with the fourth and fifth performances assigned to Amanda Majeski, a first year apprentice artist in Lyric Opera’s Ryan Center.

From Peasant Girl to Contessa

Majeski has had experience with San Francisco Opera’s Merola program, has sung a lead Mozart role in a smaller venue, and is scheduled to appear as the Countess at the Opera Theatre of Saint Louis. Cast as one of the two Peasant Girls with solo assignments (which she sang for the first three performances and is expected to sing the final six) she was Schwanewilms’ cover.

But rather than being simply an emergency stand-in for two performances until a more seasoned star could arrive to take over the role, she more than held her own in a world class  cast of major Mozart singers. (Like Cinderella, she will return to humbler surroundings as the peasant girl, but also like Cinderella, she made such an impression that she will be afforded the elite status that comes from a breakout performance – in Majeski’s case, performing a major role with distinction at one of the world’s great opera companies.)

As has been noted on this website previously, when such a breakthrough does occur, there may be no reviewers present to record the event, if it happens later than the production’s premiere night. Fortunately, this website has been able to report other such occurrences. (See: A “Faust” Surprise in Houston – January 23, 2007 and An “Idomeneo” Surprise in San Francisco – Daniela Mack’s Princely Idamante – October 26, 2008.)

[Below: Amanda Majeski sang one of the Peasant Girls in the first three performances and the Countess Almaviva in the fourth.] 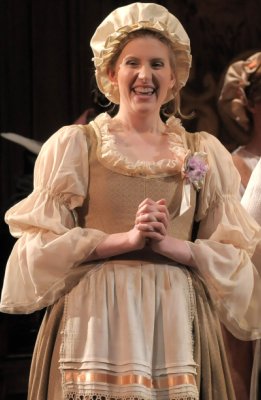 Sir Andrew Davis conducted, with a masterful reading of Mozart’s brilliant overture. The curtain rose on Sir Peter Hall’s classic production whose sets and costumes were designed by the late John Bury. For this production Herbert Kellner was stage director.

Ketelsen and De Niese made a sparkling impression as the engaged house servants, Figaro and Susanna. De Niese perfectly fits the latter role, actually the longest in the opera. When one hears her, with her warm, full sound and luscious vibrato, and when one witnesses her vivacious acting, it is hard to conceive of how any other soprano could surpass her in this role.

Having been impressed by Ketelsen in French Opera (Escamillo in Bizet’s “Carmen” and Mephistopheles in Gounod’s “Faust”), I found myself enjoying his Mozart equally well. Ketelsen, a student of Giorgio Tozzi, the great mid-2oth century basso cantante, seems to be at the threshold of an illustrious career.

[Below: Figaro (Kyle Ketelsen) in an affectionate moment with his fiancee Susanna (Danielle De Niese; edited image, based on a Dan Rest photograph, courtesy of the Lyric Opera.] 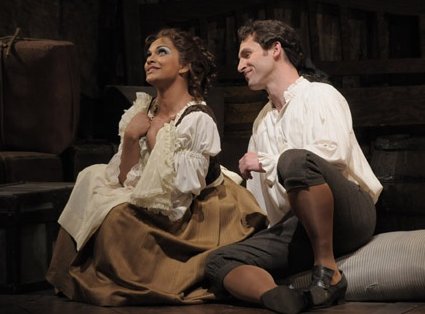 After the first two enchanting (and for the character of Figaro, informative) Figaro-Susanna duets, Ketelsen sang Figaro’s Se vuol ballare with the touch of confidence that his character will be able to outwit and outplay his powerful employer.

At this point, a sizable minority of the characters in the cast are conspiring to break up Figaro’s marriage to Susanna. The still bitter Doctor Bartolo (Andrea Silvestrelli), outwitted by Figaro in the “The Barber of Seville” operas written before (Paisello, 1782) and after (Rossini, 1815) Mozart’s “Nozze”, sings La vendetta.

Silvestrelli has an amazing range of roles, and clearly is drawn to the major Wagnerian basso parts. My reviews of his Fasolt in Wagner’s “Das Rheingold” in San Francisco and Seattle and his Hunding in “Wagner’s “Die Walkuere” in Seattle, are only three of my impressions recorded on this website of Silvestrelli’s work . But his “Nozze” Bartolo was yet another sophisticated performance, Silvestrelli handling both the aria’s legato passages and its rapid-fire patter with seeming ease.

The near catfight between de Niese’s Susanna and the Marcellina of Lauren Curnow was properly ironic, and led into a beautifully conceptualized and sung Non so pui cosa son, cosa faccio by DiDonato’s Cherubino.

DiDonato has emerged as one of the most important interpreters of the mezzo roles in bel canto operas (particularly Rossini’s) in recent history, and unquestionably is a leading contender for the mantle of reigning Rossinian  that Marilyn Horne established for herself three decades ago. But she is also justly famous for the principal “trouser” roles in the operas of Mozart and Richard Strauss – with Cherubino and Octavian in Strauss’ “Der Rosenkavalier” as signature roles.

[Below: the page boy Cherubino (Joyce DiDonato) shares with Susanna (Danielle De Niese) his passionate interest in the women of the household; edited image, based on a Dan Rest photograph, courtesy of the Lyric Opera.] 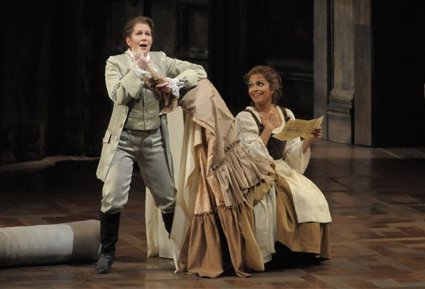 The arrival of the Count Almaviva (Marius Kwiecien) begins the cascade of comic routines that are irresistable, no matter how often seen, to a Mozart devotee. Kwiecien is particularly associated with the role of the Count, and has mastered the character’s arrogance, lasciviousness, bluster and humanity. Cosa sento! Tosto andate, his terzetto with de Niese’s Susanna and the oily Basilio of character tenor Keith Jameson was especially wonderful. 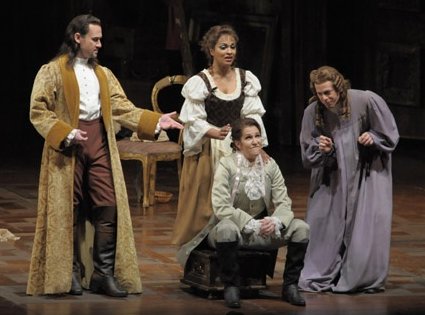 The major character who does not appear in the first act’s manic exposition scenes is the Countess Almaviva (Amanda Majeski), whose first appearance is to sing the contemplative aria Porgi amor. Majeski was affecting, with a pure tone and beautiful vibrato, and immediately established rapport with an audience that knew this was surely the most important performance of her career to date.

Once one has has heard the Countess sing her first aria – soon followed by the first solo aria of de Niese’s Susanna (as she dresses Cherubino as a girl) – an opera goer has the measure what the remainder of the performance will be like. Ketelsen’s Figaro, DiDonato’s Cherubino, Silvestrelli’s Bartolo, and Majeski’s Contessa have had all had solo arias (Figaro has had two).

Although Kwiecien’s big aria (the menacingly performed Vedro mentr’io sospiro) comes afterwards, Kwiecien’s every appearance as the Count drives the action. The extended ensemble that ends the first half of the opera is one of the supreme masterpieces in opera, and Kwieicien’s interactions with this superb cast were inspired.

Also worth special note was Kwiecien’s magical duet with de Niese, Crudel! perche finora and Mozart’s personal favorite of the ensembles, the sextet in which Kwiecien and de Niese are joined by Ketelsen’s Figaro, Curnow’s Marcellina, Silvestrelli’s Bartolo and the Don Curzio of Ryan Center tenor, David Portillo. (Like Majeski, Portillo is a graduate of San Francisco Opera’s Merola program and is now with the Lyric Opera’s Ryan Center for young artists.) Philip Kraus was the Antonio and Angela Mannino was a pleasing Barbarina.

“Festival casting” is a term especially associated with European summer festivals that seek to cast every role with major international stars in their vocal prime, for an impeccably staged and acted performance. The combination of Lyric Opera orchestra, led by Sir Andrew Davis, with the team of Ketelsen, de Niese, Kwiecien and DiDonato, joined by Amanda Majeski, demonstrated that major American opera companies can and do produce festival quality Mozart.

“Nozze”, the final production of Lyric Opera’s 2009-2010 is a triumph. Those who will see Cabell as the Countess for the final six performances, will also see Majeski as a Peasant Girl –  one who came to know what it’s like to be the Countess with this cast.

[Below: the Count Almaviva (Marius Kwiecien, seated left) is addressed by Figaro (Kyle Ketelsen) and Susanna (Danielle De Niese); edited image, based on a Dan Rest photograph, courtesy of the Lyric Opera.]